Which adventure was your first? Ever itch to play/DM it again?

Keep on the Borderlands was my first to DM as well. I’ve run it again recently with my tabletop group as a “filler” game if one of the players can’t make the session and we therefore postpone our ongoing campaigns. I love it immensely.
As a player, I’m not sure it was the first module, but I played White Plume Mountain fairly early on and am now running it for my two grandchildren ( and supportive, non-gaming wife as a dwarf cleric) and they recovered Whelm yesterday!

Nice to see a mention upthread to the White Dwarf classic, Halls of Tizun Thane. Fond memories of that one.
And in similar vein, I got huge use out of the wonderful Fell Pass adventure in Dragon 32. The evil magic Warhammer, Casrac, went on to play a major role in my first campaign. 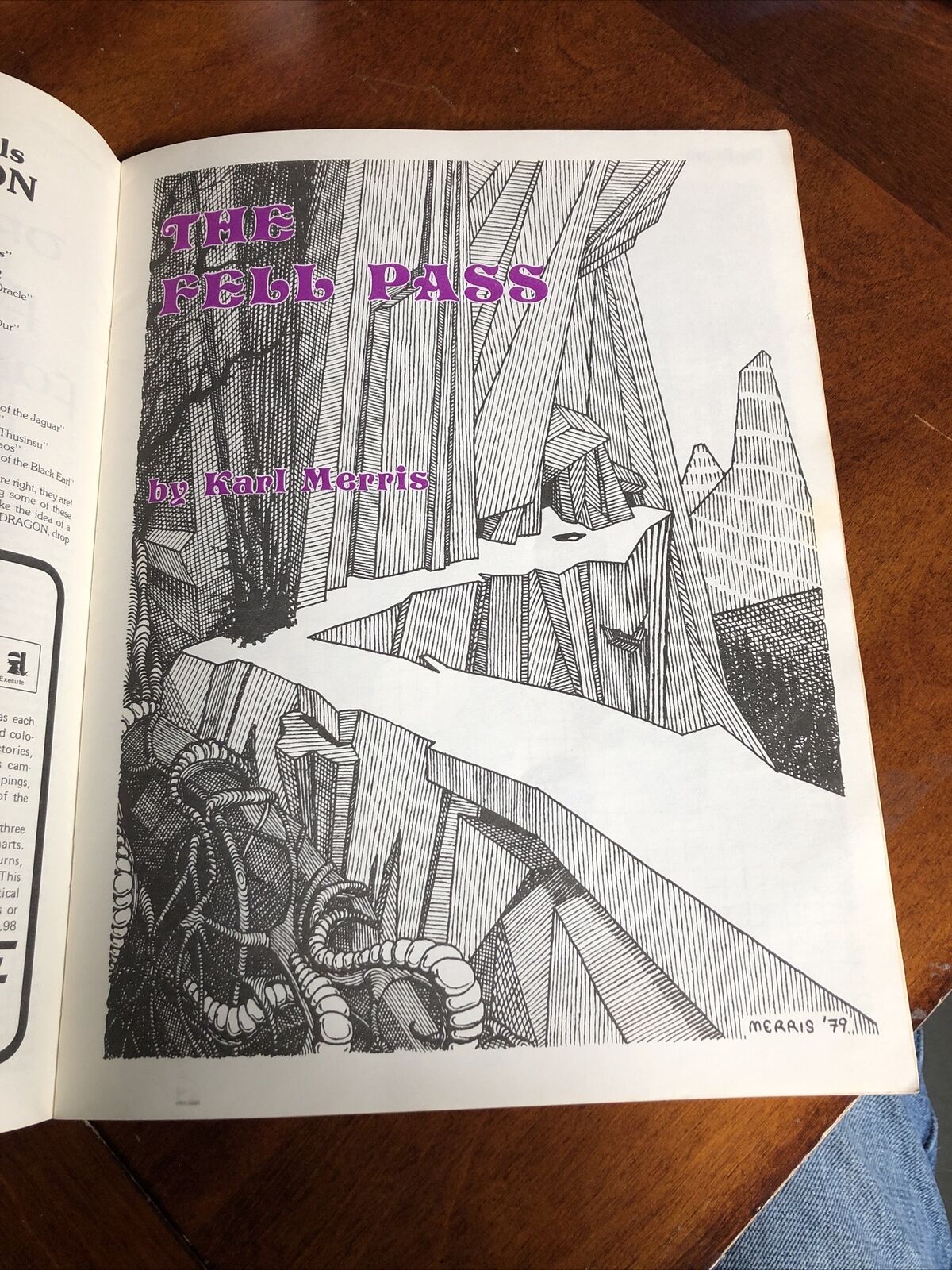 Supporter
Lots of people seem to be answering with B2. IF any of those people play Trophy Gold I have a free playtest incursion that's a flipped B2. Have at it.

I played B1 then ran B2 five or six times. After that, I ran my own modules.

Re: B1 and B2 "No." They're just not my style any more. I played through Hackmaster™'s versions of them both and didn't enjoy them.

I think my first published adventure was "X1: The Isle of Dread". I'm not planning to run it again, but funnily enough my current campaign is titled "Isles of Dread" and is very much inspired by...

The other one that might be my first is "B7: Rahasia". I do periodically think of returning to that one - I made a mess of running it back in the day, so it would be nice to see how it is actually supposed to go.

DrunkonDuty said:
Keep on the Borderland. Was that B2? Back in 1982.
Click to expand... 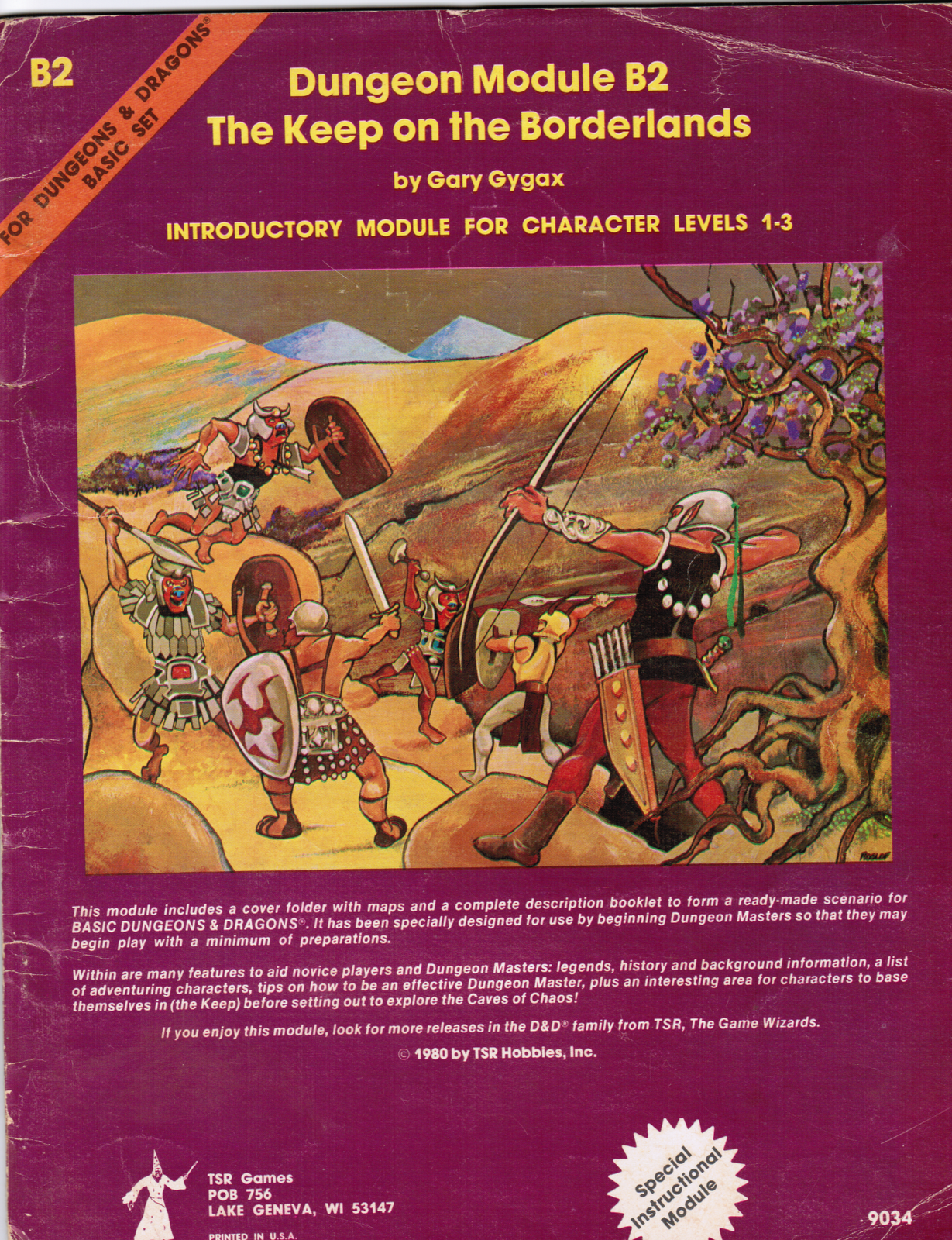 aco175 said:
The first adventure we played I cannot remember the name. It had a set of bars that split the party and we died from bugbears or gnolls or such. Might be B1 or B2. I think my father ran B2 from the basic book after that but do not recall much. I want to run the series but likely would modify it more than Goodman has done with more story and placement.
Click to expand...

B1 In Search of the Unknown had a portcullis trap. 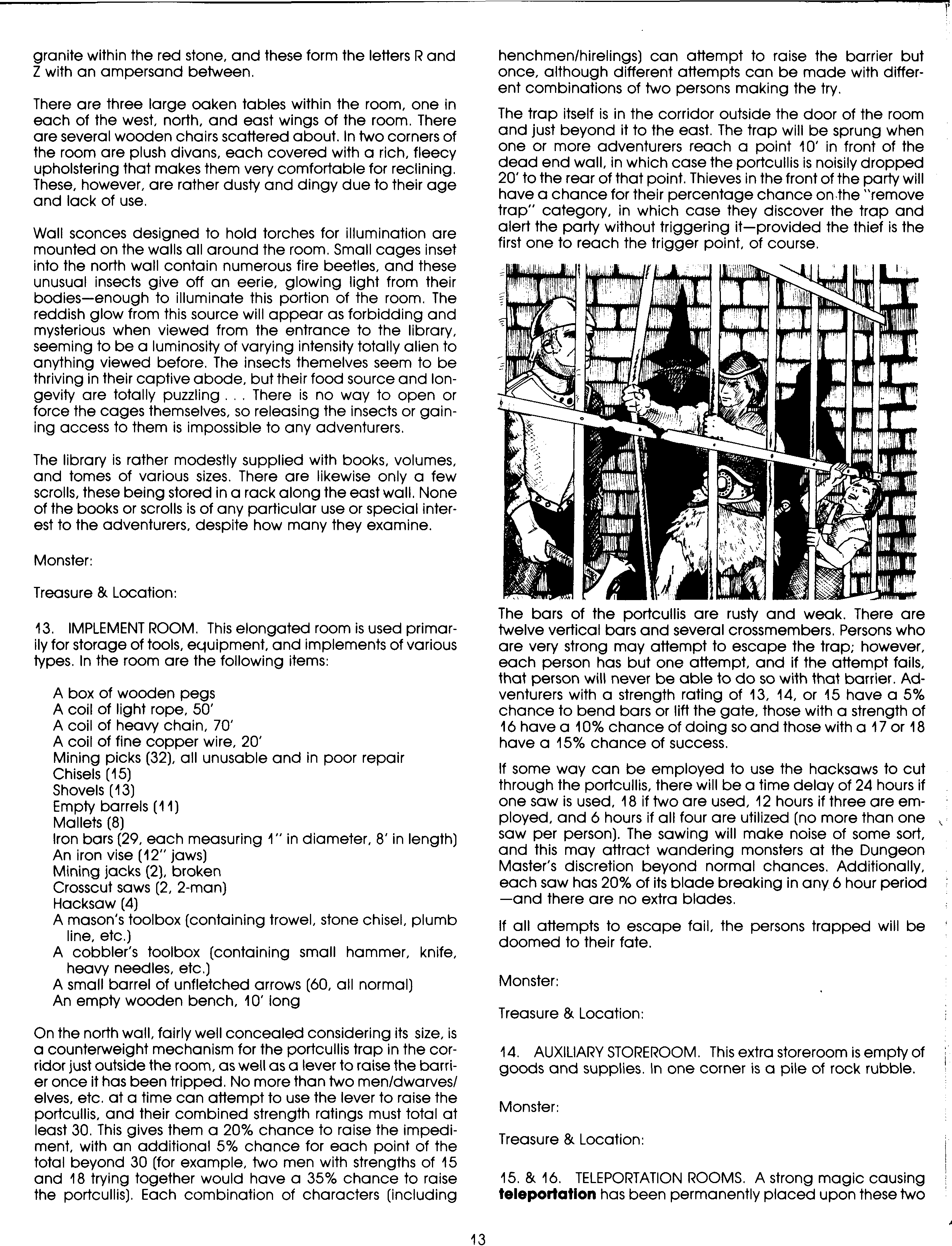 All my early playing and DMing was in homebrew settings.

1st canned module adventure as player: White Plume Mountain is the first I remember, but I'd learned a bit by then.

Favorite "canned module" to play: I can't remember the title. It was in White Dwarf; the thing I remember was the need to get a big metal disc at the bottom of a deep pool out of the way so we could go down the shaft it covered.

I wish I could remember what my first D&D adventure module experience was! It was probably whatever came with the original blue box, if any.

Publisher
Surprisingly, NOT B2, but Palace of the Silver Princess instead. It had just came out, and my brother was the DM. I was playing a cleric. After defeating a skeleton in the first room with 1 hp remaining, he asked me which direction I wanted to go (the map was on the ground between us). I said "left" because the door was to my left.

Well, to his left was the wall. He replied, "You walk into a wall and suffer 1 hp of damage."

John Dallman said:
(...) Favorite "canned module" to play: I can't remember the title. It was in White Dwarf; the thing I remember was the need to get a big medal disc at the bottom of a deep pool out of the way so we could go down the shaft it covered.
Click to expand...


Now I'm very curious. Do you remember what year this was?

My first adventure as a player was B1, In Search of the Unknown, in the Holmes Basic box with chits instead of dice. My dad ran the game for my brother and me. I don't remember what characters we played, though I think one of us was a magic user. At least one PC was killed by a skeleton. After that first session, my father decided that it was too much work, and turned it all over to us. Thus B1 was also the first adventure I ran as a DM for my brother and some other friends. At the time, we didn't have any experienced mentors, so we thought the map should be out on the table for everyone to see. I distinctly recall whenever the PCs passed a secret door, they would keep rolling until someone (usually the elf) spotted it.

I would enjoy running or playing B1 again. At least for a while. Most of the folks I game with don't have much patience for large dungeon maps like this anymore.

ilgatto said:
Now I'm very curious. Do you remember what year this was?
Click to expand...

Could it have been The Lair of Maldred the Mighty in WD#24? 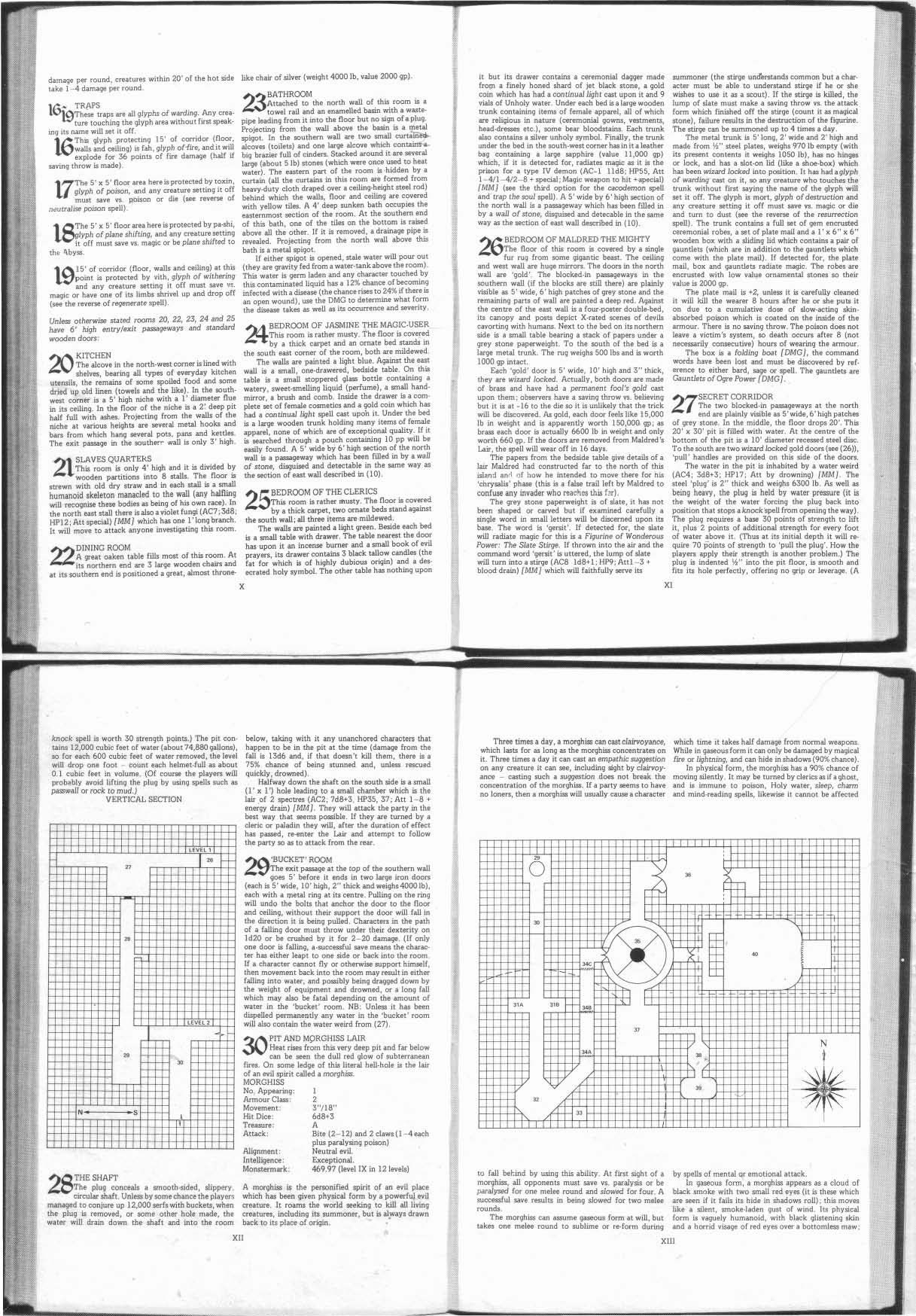 I think the first thing I ran was a little adventure about an enchanted ettin that was bundled with the German release of the D&D 3rd edition PHB. Don't remember anything else about it and I think it was no good.

The first big thing I ran was the Randal Morn trilogy for Forgotten Realms. If one day, I would want to run an OSRIC or OSE campaign in the Dales again, I might try to hunt those adventures down to see how much of them is salvageable. The general idea of the lord of Daggerdale trying to kick out the Zhentarim who have taken over his town is not a bad one, but I believe there wasn't anything interesting about the execution.

Crikey
-First RPG was late 1980, it wasn't DND, but not sure what dragonquest adventure it was ( may have been homebrew).
-First ad&d may have been U1 or N1.
-First Basic would have been the one in the box set.

Well, there was a LOT of homebrew. The first written module I remember running was ... 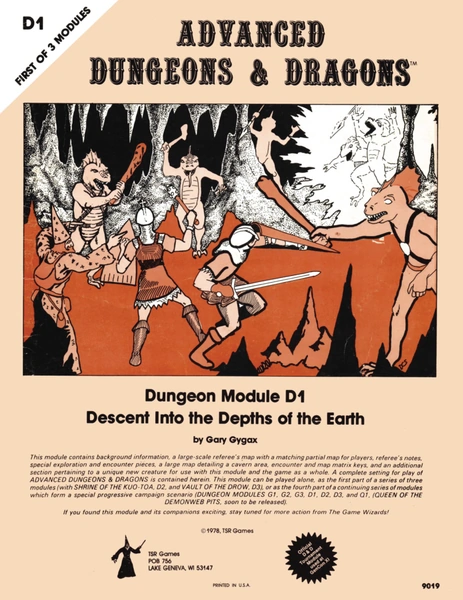 ilgatto said:
Could it have been The Lair of Maldred the Mighty in WD#24? Room 27?
Click to expand...

That's it. We used Reduce on the plug, which worked fine. The scenario says that it assumes you'll use Passwall or Rock to Mud, both of which are far too high level for the recommended character levels. The DM felt it was ironic we'd used a first level spell, and not spent hours bailing the water out of the pool.

Apart from that, it was memorable for the play of a newbie, whose fighter kept charging ahead of the rest of the party. He survived, but his wisdom was reduced by popular demand.
Last edited: Dec 10, 2022

B2 was the first printed adventure I ran. I've run it a few times over the years, and its been interesting. "Bree-yark" has been the doom of many a player.

I think the first adventure I played in (instead of DMing) was B3 - Palace of the Silver Princess. I remember it being confounding at times, but generally pretty fun overall. I'd definitively be willing to play in it - or run it again.

I too could not save Aleena, curse you Bargle
then I cant remember if it was The Village of Hommlet, (but not the TempleoEE) or Keep on the Borderland

then started homebrewing and doing my own