​
How can we provide non-violent means of resolving conflicts with monsters and NPCs in RPGs? 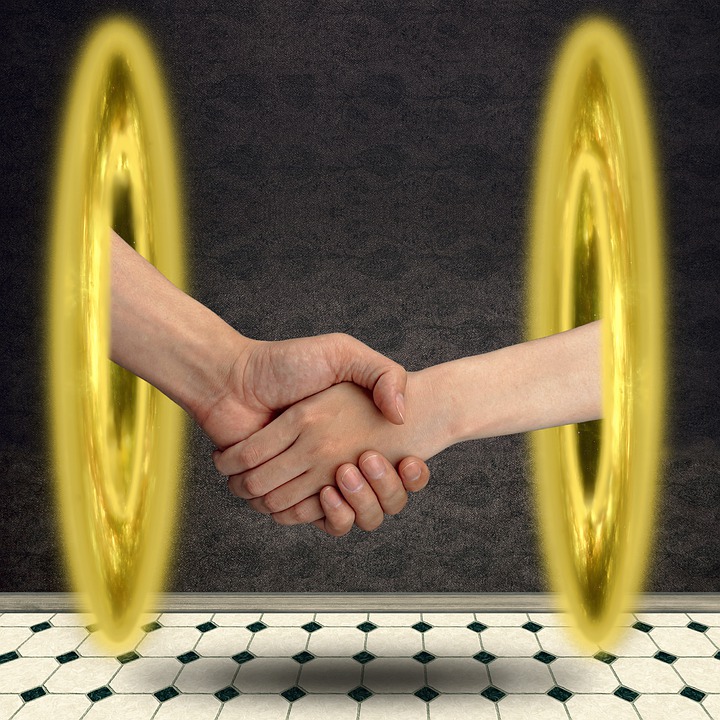 Picture courtesy of Pixabay.​
Recently I noticed a discussion online about the percentage of time spent in combat in RPGs. Many felt that in D&D, most of playing time is spent in combat. With war wracking the world, the great ugliness of civilian (and military) deaths may have reinforced the inclination of many people to want to avoid combat even in a game that’s normally about adventuring and conflict.

My friend in a D&D game encountered a werewolf with a slave. I expected the normal reaction of an adventuring party: attack the werewolf both to save the slave and to despoil the werewolf of any treasure it may have. Or they would decide to walk away rather than fight. Instead, his character made disparaging remarks about the slave to drive down the price, then finally bought the slave and freed him. My friend has been a wargamer for more than 45 years, so doesn’t shy away from conflict in games. But he thought it was more interesting (and safer for the characters) to resolve the confrontation in a peaceful way.

So I asked myself, what tends to encourage nonviolent resolution of problems?

The rules themselves can have a lot to do with perceptions of how to resolve disagreements without violence. If there are lots of rules for nonviolent interaction then you’d expect players to be more likely to use nonviolent interaction. If there aren’t many rules for that, then naturally players are going to resort to violence. Conversely, if the rules are all about combat, how are the players going to solve problems?

I think of Fourth edition D&D, which emphasized co-operative combat. Removing a lot of the non-combat related rules in an attempt to balance the classes against each other stripped away a lot of strategic parts of early versions of D&D, removing a principal method of peaceful resolution (see below).

The GM has a lot to do with the amount of violence in a game, whatever may or may not be in the ruleset. If the GM thinks that the game is all more like a competitive sport, he or she will probably be happy to have lots of combat as if it was some kind of football game. If the GM sees the whole thing as closer to war, he or she will let players resort to stratagems and other ways to “not fight fair”, or not fight at all.

The setting may also promote non-violent (or violent) methods of resolving disagreements. Say the player characters live in a city governed by rigid imperials who just do not tolerate violence.

The obvious idea from a game design point of view is to make combat so dangerous (debilitating or even lethal) that it’s much smarter to find other paths to success. There have been RPGs of that sort, just as there have been RPGs that are about combat and little else.

Strategic as opposed to tactical methods of finding success can also make a big difference. Keep in mind that tactics refers to what you do during a battle, while strategy is what you do aside from the actual battles. By strategic methods I mean actions like negotiation, politics, influencing the authorities, making money via business, finding allies, devising ways to intimidate on a large-scale, etc.

I’d speculate that the strategic methods are going to be more prevalent in a campaign that is primarily active in a city than one that is primarily about dungeon crawling and exploration. The former offers lots of opportunities for strategy. Dungeons and exploring are where violence is more likely to occur.

Some people might suggest that removing occasions for “useless” combat will help – useless in the sense of not achieving some mission or story goal. Because I think pacing is important, I am not bothered by such “useless” combats, as they provide a contrast with the really important combats, and even help players practice their tactics. You need both lows and highs, unimportant and important. If every combat is important (“not useless”) then they all become mediocre. Moreover, I like to see good players decide when a combat might be pointless, and (try to) avoid it.

Your Turn: What percentage of playing time is spent in combat in your RPGs (and which ruleset are you using?)
Last edited by a moderator: May 6, 2022
Click to expand...

Flamestrike said:
DM: The clearly unarmed elderly man approaches you, a smile on his face. He holds his hands up in the air, and opens his mouth to talk...
PC 1: Wait a minute there DM. This looks suspicious. Its obviously a trap.
DM: Wait... wha..?
PC 2: Yep. Clearly clearly a trap. He's probably a lycanthrope or doppelganger. Maybe even both! Who the heck is walking around this neck of the woods unarmed anyway?
PC 3: Yeah. An 'unarmed' elderly man? Likely a Monk or a Wizard. Probably a high level one at that!
DM: He has his hands up and is trying to spea...
PC 4: Well, he is waving his hands about, and thus probably about to cast something. I knew it, quick before he gets the verbal components out KILL THE EVIL WIZARD!
PCs (in unison): We attack!

That's how my social encounters tend to go down far more often than not.

DM: An imperial cleric and a rich-looking noble watch as you slaughter the old man. The cleric demands an explanation, while the noble summons the town guard...

GMMichael said:
DM: An imperial cleric and a rich-looking noble watch as you slaughter the old man. The cleric demands an explanation, while the noble summons the town guard...
Click to expand...


He has accomplices! Attack!

Also, how much XP was the evil old Wizard/Monk worth again?

Give them a hammer and everything looks like a nail. With D&D, not only is the game system focused on combat, but winnable combat. I ran the joke Fluffy Goes Down the Drain adventure from Castle Greyhawk, and, not only did one of my players meet Juubilex (he was on vacation) but attacked him five times, assuming that he could because that's how modules work. With Call of Cthulhu, players can't just run in shooting things (well, they can, if they want to last five minutes then play something else), so they're forced to come up with solutions, although much of them are finding a weakness in their opponent before a quasi-hopeless climatic combat.

The problem is that, if you say it's a certain RPG game, players already have an assumption that they'll play a certain way. And not all players are there to find a non-violent solution, maybe they play RPG's to blow off steam and satisfy their power-hungry egos. That's also why my favorite RPG is Paranoia, where wit and fast-thinking is rewarded, and everything else is failure. But that game falls flat for many players who are more interested in RPG's as power trips, rather than creative gaming.

Ixal said:
Another thing that affects the players willingness to look for non combat solutions is the reward structure.
If you are rewarded for combat with, for example, XP and access to better and valuable loot like in D&D then players will seek out combat.
When on the other hand all or most rewards depends on another goal and you have nothing to gain from combat besides maybe making achiveing said goal more easy then players will try to avoid combat, based on how dangerous it is, and seek out other ways. Shadowrun would be such a system.

I don't think dungeons neccessarily promote combat. A facility you have to infiltrate in Shadowrun can be seen as a dungeon, but often players still try to avoid combat.
But to be fair, you have a lot more options to scout and plan in SR than in D&D.
Click to expand...

I absolutely agree with Shadowrun being a game where you try to avoid combat. We played 3rd Edition for a long time and each run was about planned using stealth, hacking and break and entry. Combat was always plan B, because the runners could win because of there one or two fighters, but usually one or more team members got hurt seriously hurt in decisive fights.

Oofta said:
I'm always open to PCs trying options. It may not work, it may only be a temporary solution, my player might be murder hobos. I always try to take the view of the opponents and try to determine what they're after, what their goals are and run it from there.

One of the reasons I stopped using XP was because I didn't want the PCs penalized for not killing everything in sight. Of course for every action there's a reaction; sometimes killing the enemy is the only way to permanently stop a threat. Other times killing the enemy just makes more enemies. I'll try to give hints and set up different types of scenarios but sometimes the PCs simply don't know what the best option is.
Click to expand...

Characters get XP for resolving an encounter. Not necessarily killing things.

The single biggest thing that has made a difference in my own campaigns and games is lethality and consequences. If combat is more like real life (where say drawing a gun is a very risky proposition), it tends to produce less combat. You still might have plenty of violence. I run a lot of crime campaigns for instance. So you can have plenty of mob cinema bloodshed, but if the system is lethal, even when things are moving towards a violent climax, folks are way more cautious and often try to resolve things through non-violent means first. If you know your character can be killed easily by a bullet or by a blade, you tend not to rush right into combat in every instance.

In a fantasy campaign with a system more like D&D, I think there the key is to give players reasons to not always kill whatever it is they encounter. Not every encounter has to be about combat. This is often more about giving monsters and NPCs, even evil ones who could easily become combat encounters, more depth in terms of why they are there in the first place (presumably if they are encountering the party, they aren't all out there just trying to ambush and eat them, many have their own agendas). Also making good encounter tables. I try to include a lot of things like officials, sect members of organizations, etc. Sometimes those kinds of encounters will lead to conflict. More often I find they lead to role play heavy situations.

Another is reward system in the form of XP. I like to give XP only for significant combats that are challenging (i.e.. beating someone equal to yourself). I also give XP for things like finding lost treasure, making a major contribution or causing significant change in the setting, etc (and you can only get 1 xp for each thing on the list each session).