Worlds of Design: The Importance of Self-Consistency

Internal self-consistency, creating stories that fit together and make sense, is critical if you want your players to be immersed in your game. 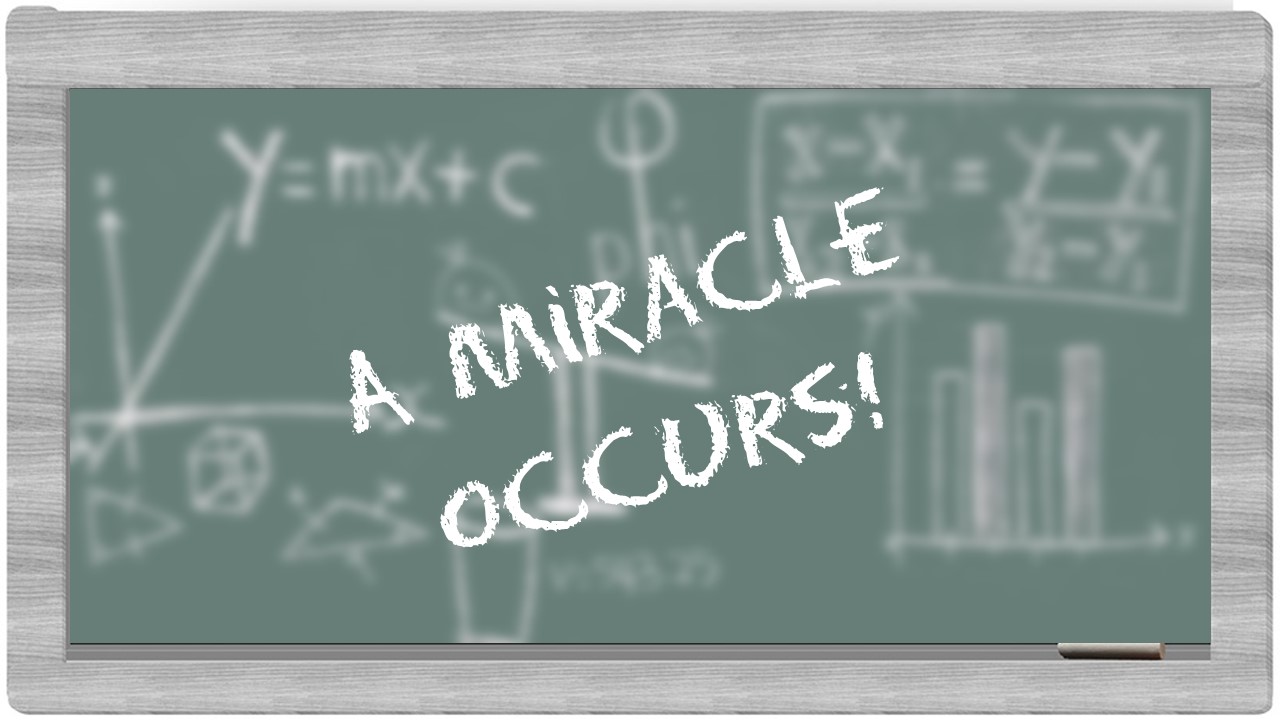 Today my topic is internal self-consistency, creating stories that don't have "plot holes big enough to drive a truck through", and don't change the rules of engagement as the story progresses. "Consumers" of stories, whether in writing, film, TV, play, oral, or something else, must suspend their disbelief as they listen to the story in order to be immersed in it, to play along with the storyteller. When a story isn't internally self-consistent, immersion may be broken.

To illustrate, I once saw a one-panel cartoon where a professorial/scientist type in a white coat is writing on a chalkboard as seated people watch. On left and right of the board are complex-looking calculations written small. In the middle of the board, connecting the two sets of writing, are the words "And a Miracle Occurs".

That miracle is what storytellers want to avoid, in the same way that they want to avoid Deus Ex Machina when they apply plot twists and avoid overuse of coincidence (even though it worked for Edgar Rice Burroughs). The storyteller doesn't want to give consumers excuses to break immersion, to fail to suspend their disbelief.

Part of self-consistency is not making mistakes, not turning someone who's right-handed into a lefty, not changing someone's favorite drink into something else, and so forth. But mistakes in other media are more an issue with editing, and for game masters playing a game in real time, mistakes are bound to happen. It's when those mistakes create anachronisms or miracles that consistency starts to break down and threaten immersion.

Anachronisms are an obvious form of lack of self-consistency. ("Anachronism: a thing belonging or appropriate to a period other than that in which it exists, especially a thing that is conspicuously old-fashioned.") If a Colt .45 shows up in a setting that's quite medieval, participants will wonder how it got there. Another would be accurate clocks in a Dark Age setting. On the other hand, a bronze sword would also be out of place. These can have explanations in a fantasy world, but they're still jarring when first encountered by the consumer of the story.


What Constitutes a Miracle?​

Standards of what "miracles" are acceptable vary a lot. In television writing, the writers don't seem to care much, and all kinds of miracles commonly occur during a series even though most viewers don't recognize them as miracles.

Part of the reason for this lack of consistency: the massive desire of showrunners today to have "surprise reveals" in their stories. The disease has worked its way into film as well.

The writers of the movie "John Carter" had an outstanding story from Burroughs' A Princess of Mars, but changed it for the worse. One change was a big reveal about
Carter having been married, and finding his wife and child killed by bandits when he came home from the Civil War. It's poorly done: the movie makes much more sense on second viewing. (In the book, Carter had never had a wife or lover before appearing on Mars.) Another change was to make the opposition super-powerful, impossible to defeat in the long run. We can ask why the bad guys near the movie's end didn't simply kill Carter (as they had killed so many others), much simpler than sending him back to earth! What nonsense! The writers had written themselves into a hole, "and a miracle occurred."
On the other hand, many writers expect that most viewers will accept such miracles as a matter of course.


Internal Consistency in Your Campaign​

Even in the Lord of the Rings (LOTR), some people point to inconsistency because the giant eagles should have carried the Ringbearer directly to Mount Doom. Yet we can suppose that the eagles were frightened to take the chance, and that the Powers That Be thought the eagles were sure to be intercepted; but Tolkien didn't address the possibility. In general, LOTR is much more self-consistent than typical fiction today, despite its fantastic setting.

Similarly, because fantasy games tend to be fluid and evolve over time, it can be easy for game masters to contradict the events in their game from previous sessions. Whether or not players care about this likely depends on the group, how often they play, and how much internal consistency in the world is expected from the onset.

When these sorts of inconsistencies happen, it's up to the GM to figure out how to make it right (assuming that even matters to the players). Magical solutions and divine intervention abound; something television and movies have primed us for.

Your Turn: How much do you concern yourself with internal consistency?
Click to expand...

Session zero very important as mentioned above.
Set the feel of the campaign so the PCs are consistent and fit the intent.
I quite like the John Carter movie and I really like the rpg