D&D 5E YOU are pitching the next big WotC Adventure. What is it???

Choose one from the following:


Bitbrain said:
Lantan: March of the Modrons. Forgotten Realms-to-Planescape module anthology. Each module is set in a different outer plane.

Cormyr: They came from Wildspace! Forgotten Realms adventure based in Cormyr. Knights in shining armor versus neogi (alien snake-spiders).
Endgame takes place on a neogi battleship hiding among those asteroids orbiting Toril.

Rock of Bral: Realmspace. Spelljammer anthology with two adventures for each of the other planets in Realmspace (one low-level, the other high-level).

Tyr: Sand and Blood. Dark Sun adventure based in the lands around the Free City of Tyr, specifically the Ringing Mountains and the Great Alluvial Sand Wastes.
Endgame big bad is a powerful noble family from Urik who want to impress King Hamanu by using their personal army to conquer either the town of Kled or Altaruk.
Athasian Chronicles. Dark Sun module anthology based in the Tyr Region.
Final module involves exploring the ruins of Guistenal.

Karameikos: The Forgotten Empire. Mystaran adventure. Think Rise of the Runelords but without all the gross parts, Egyptian-themed monsters instead of giants, and a Nithian mummy lord instead of a Thassilonian archwizard.

Athas: Empire of Chitin. Dark Sun adventure. The J’hol-Kreen have moved into the Tyr Region. Destroy their war machines, drive off their insect monsters, kill their leaders, and save the day. All while disrupting the Sorcerer-Kings’ plans to take advantage of the chaos.

Darokin: Chaos Returns. Mystara adventure. Parts of Darokin keep turning into a quasi-nuclear post apocalyptic landscape, only to revert back to normal after a few days!
Mutant-megafauna riding cavemen, flamethrower and harpoon gun-wielding ratfolk, sorcerous cockroach monsters, and robotic creatures rampage across the land.
Endgame big bads are the Oard, time traveling cyborgs from a possible future.
Click to expand...

Reynard said:
Something big set in the Astral Sea where we can moosh together Planescape and Spelljammer into the Planejammer setting it always should have been.
Click to expand...

I'm plotting this campaign out right now*. So I hope of WotC puts this out, they do so in a hurry!


*But in my campaign, the city of Ptolus has been ripped free of its prison world and placed in the Astral Sea. #closeenough

"Fire Among the Stars" a planescape/spelljammer story that takes the characters through a Githyanki invasion to first deposit them in the mortuary in Sigil to learn that Vlaakith the lich queen plans to awaken a dead god (Tenebrious/Orcus) in an ill-advised attempt to end the menace of the mind flayers (who have their own plot to blot out the suns of various worlds). From there, travel the Astromundi Cluster to the Rock of Braal to deal with treacherous Neogi traders, recruit Giff mercenaries to your cause and rouse the Elvin Armada from its listless slumber to protect the suns from the Illithid fleet, who have allied with the Beholders and their planet devouring Worldcrusher. After blunting the illithid plot, bring the fight to Vlaakith by capturing an Astral Dreadnought and slip it past the Githyanki's Mindblade Fleet to bring a final end to a stirring dead god. 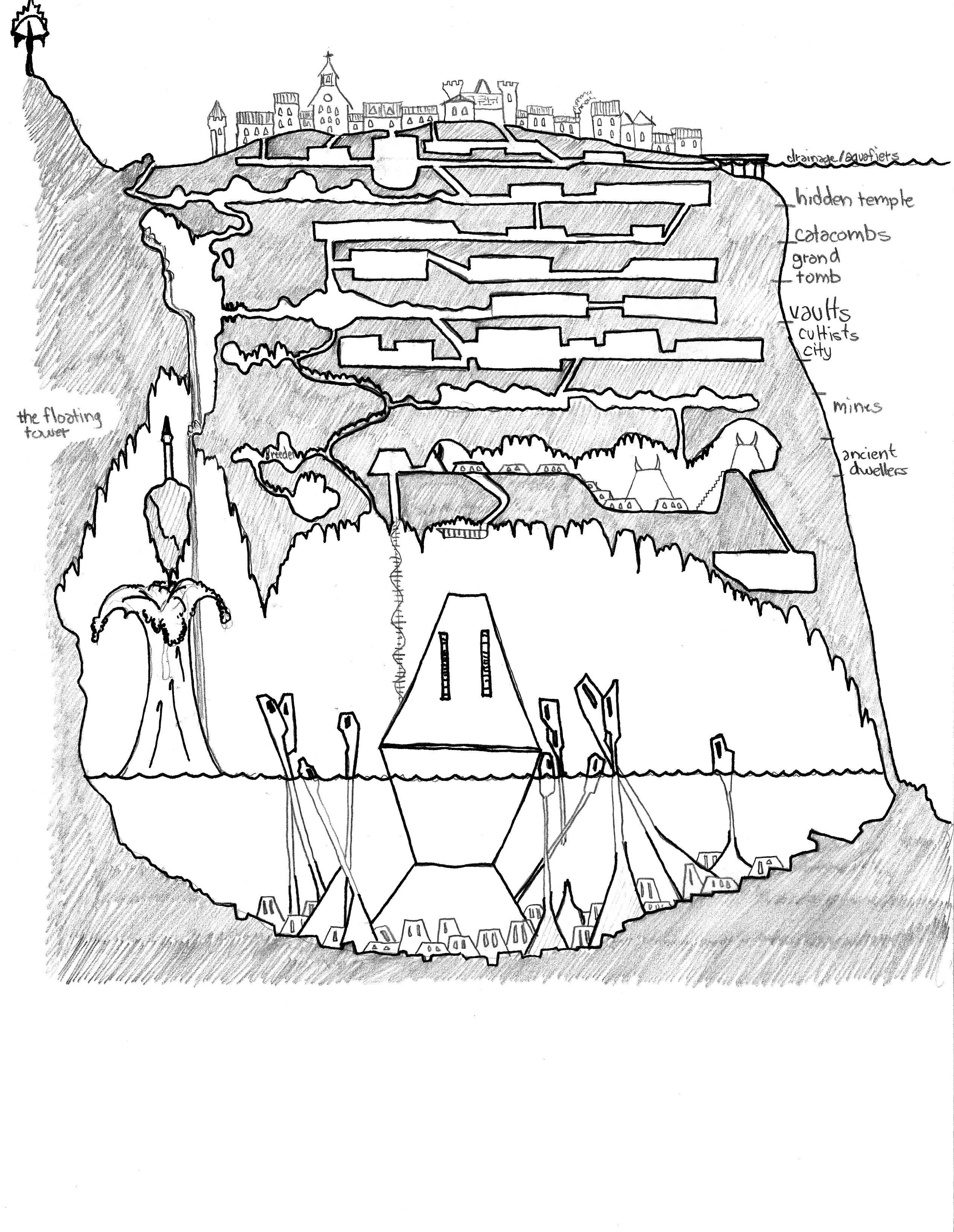 I would do a double box set. Create multiple arcs for starter characters. Groups will only be able to go through some of the dungeons and places along the paths before 5th level triggers other possible threats. This way you can play the box a couple times and not have it be the same game depending on the PCs actions.

Background research: what are the best-quality -and- most popular -and- fondly remembered adventures set in Ed Greenwood's Cormyr and the Dales?
The new adventure is a hat-tip to those old adventures. The PCs have to interact with lore and legendary heroes on the way to dealing with a modern problem themselves.

Rabbitbait said:
The Rod of Seven Parts, but across the D&D multiverse with every part being in a very different world.
Click to expand...

This is how I'd do the D&D movie franchise.

Supporter
I said it once. I'd say it again.

WAR OF THE PANTHEONS!

A whole set of gods from another world have sent their chapions to yours to wreck shop and/or convert. Every doubter and every soul swayed brings them power.

But how are they different. Well their orcs ae tinkers, their elves are miners,and their halflings do all the magic. And their good and evil forces are united. So must yours.

So can you and former enemies coexist long enough to crush this invasion in its infancy?

I don’t really care about setting or plot or any of that so much. What I’d really like to see is more dynamic environments with terrain that actually has an impact on encounters and dungeons / locations that are truly fantastical. We’ve had glimpses of the possibilities here and there, but WotC tends to default to fairly pedestrian layouts for encounter locations in 5e adventures.

EDIT: By way of example, consider the truly fantastical elemental beacons featured in the Princes of the Apocalypse concept art. The air beacon floats in the air with floating steps that spiral up underneath it, while the water beacon is basically a giant fountain. Those are way more interesting than the tower and riverside castle we got for the air and water cults respectively in the actual adventure.
Last edited: Jan 18, 2022

"Lantan: The Sea Beyond the Stars".

The players are called to Lantan, where they learn two things: the Lantanese have built a spelljammer, and the illithids have a sinister plot to blot out the sun. The players get the ship, have an interlude on the Rock of Bral, and eventually have to journey to the Far Realm itself to undo the illithid threat. Aside from the Far Realm bit, you don't even need to leave the crystal sphere.

I'm not even a Spelljammer fan, but I think the mix of blending voyage fantasy, weird fantasy, and Lovecraftian fantasy could be really cool. The PCs can still buckle some swashes along the way.

BookTenTiger said:
What is the genre? What are the main villains? What levels will it be?
Click to expand...

I'm thinking it'd be fantasy. But I'd make it a fantasy spy thriller. The PCs go to work for the Harpers motivated by a desire to earn a little coin while doing good for the kingdoms. But through the course of the campaign, the PCs unravel a plot involving senior members of the Harpers creating enemies in order to continue lining their pockets. If there was land they wanted and it was occupied by orcs, they'd steer adventurers into clearing them out of the area, purchase the land for cheap, and make a tidy profit. Thirty years ago, the orcs sued for peace on the grounds that they weren't all a bunch of sociopathic raiders but the senior members of the guild attacked them and kept it secret. Now the PCs must race against time to bring evidence to Waterdeep showing the Harpers for what they truly are.

I'd play the HELL out of the Lantan thing. Of course, if the next big adventure was a level 1-20 Dark Sun sandbox which reran the Prism Pentad with the PCs as the heroes this time round, I'd actually learn to DM on Fantasy Grounds specifically so I could run it because that's almost everything i want in life.

But regardless of what it is, I hope it comes out soon. Cos we're nearly finished with Storm King's Thunder, the group won't be a good fit for Witchlight or Strixhaven, I've read Frostmaiden and am spoiled on it, and someone or other in the group has already played through everything else. And everything Exandria is a big meh for me, so the new CR adventure book isn't too appealing either.

humble minion said:
I'd play the HELL out of the Lantan thing.
Click to expand...

I've given pretty serious thought to putting the idea to paper, but I'm very iffy on whether or not it could be published on DMsguild. Spelljammer is a no-go, but if you stay in the same crystal sphere, that might be ok...? A helm appeared in a 5e published adventure at one point.

pukunui said:
I don’t really care about setting or plot or any of that so much. What I’d really like to see is more dynamic environments with terrain that actually has an impact on encounters and dungeons / locations that are truly fantastical. We’ve had glimpses of the possibilities here and there, but WotC tends to default to fairly pedestrian layouts for encounter locations in 5e adventures.

EDIT: By way of example, consider the truly fantastical elemental beacons featured in the Princes of the Apocalypse concept art. The air beacon floats in the air with floating steps that spiral up underneath it, while the water beacon is basically a giant fountain. Those are way more interesting than the tower and riverside castle we got for the air and water cults respectively in the actual adventure.

I have something similar in my homebrew campaign. The party isn't even aware it's happening yet! Every encounter the party rolls a d10, and if it's a 10, there is an elemental surge in the area. Random roll from there determines which element and all damage from that source is +50%. You can't prep spells to predict because it takes two rolls to make a specific element happen.

These are caused similar to Feywild and Shadowfell crossovers, only with the elemental planes swinging in and out of the Prime Material at random locations.

A multiversal search and rescue of the legendary adventurer Meepo.

ersatzphil said:
I've given pretty serious thought to putting the idea to paper, but I'm very iffy on whether or not it could be published on DMsguild. Spelljammer is a no-go, but if you stay in the same crystal sphere, that might be ok...? A helm appeared in a 5e published adventure at one point.
Click to expand...

Yes, Dungeon of the Mad Mage not only has a spelljamming helm but a full (if crashed) spelljammer ship as well. I believe Rime of the Frostmaiden also has a crashed illithid (spelljamming) ship in it.

A high level romp through the Astral Plane.
A journey through all 666 layers of the Abyss to destroy Demogorgon. (Just in case all the layers of the Mad Mage weren't enough...

A kingdom with seven somewhat fractious provinces run by different clans is given an opportunity to come together for a royal wedding. The king has adopted the only survivor of a natural disaster as a daughter, and he wants to find her a spouse. He has asked one representative from each province to accompany a poet to travel the seven provinces, learn the meaning of love for each of the clans. Then they'll return and at the wedding deliver a poem about what love is.

The PCs each pick one province to be from or can be the poet, and there are NPCs queued up for the other slots.

It's a picaresque journey across a fantastic kingdom, with vignettes that are all love themed. But there's also a secret plot that is unveiled bit by bit, and everything will come to a head at the wedding, wherein a supernatural entity hopes to marry into the royal family to break a magical seal holding evil at bay.

Return to The Mud Sorcerer's Tomb.

D&D 5E What Genre of Fantasy would fit an Adventure in the Abyss?
2

D&D 5E My Five Favorite Things From Critical Role: Call of the Netherdeep
2

J
D&D General With enough planning could Schizophrenia be used to allow A Pc to unknowingly also be The campaigns true and final villain?
2