Bloodstone Press is very pleased to announce the release of five new titles for Amazons vs Valkyries.

Follow the links below to get them all today!

Quest for the Yulania Tree. A side trek for 3rd level characters

The Manticore's Den. A side trek for 2nd level characters

And don't forget to join the community on Discord for online games and exclusive content! 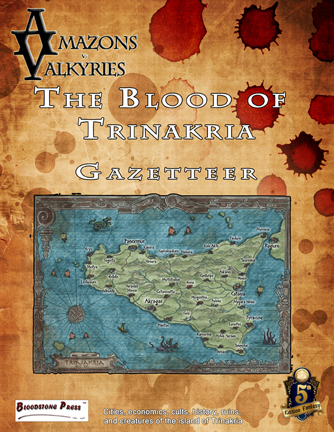 ​
Pages: 99
Game System: OGL 5E
Genre: Classical Age (Greek/Norse Mythology)​
This gazetteer details the island of Trinakria (ancient, mythic Sicily) at the start of the First Punic War (263 BCE). This book has been developed to support the upcoming campaign path, "The Blood of Trinakria," which follows the course of the First Punic War in the Amazons vs Valkyries adventure setting.

1 New Artifact. Daedalus' Manual, one of the most powerful and important artifacts in the entire AvV saga

Dungeon Lore. Description and brief history of the extensive dungeons below Akragas

Cities. Summaries of the major cities of Trinakria including Akragas, Selinus, Segesta, Syracuse, Adrano, Eryx, and 30 others

Cults. Military and religious cults active in Trinakria including the Sons of Mars, the Warriors of Falcon Mountain, and the Cult of Hera

Each city is detailed with the following traits

Patron Deity. The deity who watches over the city and its inhabitants

Population. An estimate of the city's population in peacetime

Age. The number of years since the city's founding. This can give DM's an idea of the size of the necropolis and the scope of the town's history, which may include prehistoric temples, subterranean aqueducts, or nearby ruins

Economy. The major industries of the city

Government. A brief description of the type of government currently ruling the city

Culture. The primary architecture, institutions, affiliations, and language of the city


Some of the cities and ruins outlined in this book include:


Who is This Title For?

DMs. This supplement is mostly for DMs. Any DM running a fantasy campaign will find interesting and useful ideas in this title. Since Trinakria is an island, DMs can easily drop it into any campaign setting.

Fans of AvV. This supplement is an essential resource for anyone following the development of the Amazons vs Valkyries setting.


If you're playing an Amazons vs Valkyries campaign, this supplement is essentially a large sandbox for the upcoming campaign path, the Blood of Trinakria. Combined with the upcoming modules for this campaign path, this title can provide gamers with countless hours of adventures in the early days of the First Punic War. 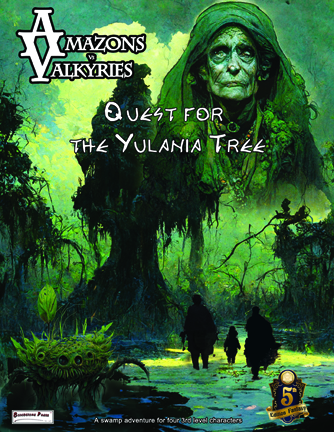 Quest for the Yulania Tree is a Fifth Edition adventure for four to five characters of 1st to 4th level, and is optimized for a party of four characters with an average party level (APL) of 3. This adventure is designed for the Amazons vs Valkyries setting, but can be easily adapted to any other fantasy setting.


This module includes several simple hooks to get any group of wandering adventures involved in the action right away. In any case, The temple of Panacea hires the PCs to venture into a nearby swamp and retrieve some bark from the rare Yulania tree, which the priestesses believe may help them develop a treatment for malaria.

· Hazards. The swamp has patches of marsh-muck, similar to quicksand. The PCs may encounter dangerous plants such as water hemlock. A deadly lightning storm might also strike.

· Skill Challenges. Perception, Athletics, Survival, and Nature skills will be most useful in completing this adventure successfully.

· Disease. While seeking a cure for malaria, the PCs may contract it themselves. This new disease is covered in detail in the file's appendix. 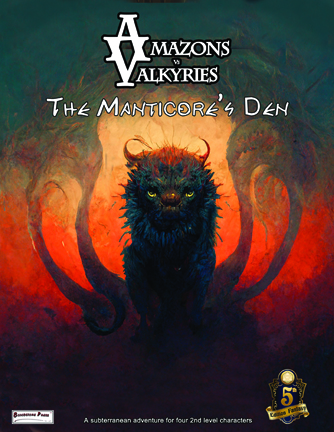 ​
Pages: 7
Game System: OGL 5E
Genre: Classical Age (Greek/Norse Mythology)​
The Manticore's Den is a Fifth Edition adventure for four to five characters of 1st to 4th level, and is optimized for a party of four characters with an average party level (APL) of 2. This adventure is designed for the Amazons vs Valkyries setting, but can be easily adapted to any other fantasy setting.

This module includes several simple hooks to get any group of wandering adventures involved in the action right away. A manticore has started attacking travelers and farmsteads in the local area. The PCs easily locate the lair, but infiltrating it is more difficult.

· Traps. Rather than traditional traps, some rooms pose trap-like risks, due to the inherent dangers of spelunking.

· Monsters. These caverns are home to giant rats, giant fire beetles, a giant spider, and of course, a manticore.

· Skill Challenges. Perception, Athletics, and Acrobatics skills will be most useful in completing this adventure successfully.

· Disease. Two opportunities for PCs to contract debilitating illnesses lurk in these caverns. These diseases (histoplasmosis and infected wounds) are covered in detail in the file's appendix. 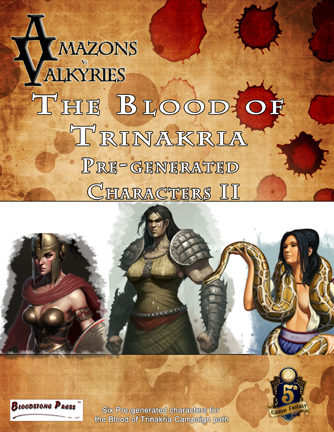 
These six pregenerated characters are designed for "The Blood of Trinakria" campaign path in the Amazons vs Valkyries adventure setting. Each character is presented with full statistics for beginning play at 1st level and includes a background story that immerses them in the setting, involves them with the plot, and explains their sometimes eclectic skill sets.

Included in this file:

Aketa the Dacian. Giant Kin Fighter. The Celts captured Aketa in battle and sold her to the Romans as a slave. She ended up in a gladiator school and fought for several years. She and Zita recently escaped and they are eager to strike back against the Romans.

Cassicia and Lugius. Human Ranger. Raised deep in the Hercynian Forest among fey and giants, Cassicia honed her skills hunting troglodytes and goblins. Her sidekick, Lugius, is her best friend and guardian.

Nena. Human Priestess (Isis). A devoted follower of Isis, Nena came to Trinakria as a missionary to spread the faith. She does charity work and provides medical care to the Carthaginian mercenaries. She also has a toddler who stays at the temple, but is sometimes unintentionally helpful or inspiring to her.

Veilia the Animal Trainer. Human Bard. Veilia's clan lived in southern Italia and suffered during the wars between Rome and the Greeks of Tarentum. Born into a troupe of minstrels and troubadours, Veilia was destined for a life in entertainment. As a young girl, she met a old animal trainer who taught her the secret languages of animals.

Xanthepia the Spartan. Human Fighter. An ambitious youth with a desire for land and riches, Xanthepia left Sparta to find her fortune as a mercenary serving the wealthiest employers. Since Carthage pays a premium and offers a bonus for Spartans, she has hired on with them.

Zita. Nymph Rogue. Humans captured and enslaved Zita and her sister. The girls were soon separated. Zita ended up in Rome, working for a jeweler. Through happenstance she met another slave girl, a giant named Aketa who was a gladiator. Together they escaped Rome, arriving in Trinakira. Penniless and hungry, they hired on with a mercenary recruiter who promised them a chance to kill Romans. Not really a warrior, Zita sees this job a way to make some quick cash so she can begin searching for her sister. ​
Included in this file: