D&D 5E 5e Oerth − the planet of Blackmoor and Greyhawk

This post is about mapping methods. When translating a 3D sphere onto a 2D flat surface, it is impossible for the 2D to retain all of the 3D information. So, preserving one kind of information while loosing other kinds causes different kinds of distortion.

"Azimuthal" (ultimately relating to a word for a compass) means the direction is accurate. When in the center of a circle or a sphere, the map accurately preserves the coordinate for the directions around that specific point of reference.

"Equidistant" means the length of distance away from the center, such as kilometers or miles, is accurate.

A "projection" refers to conceptually (and sometimes literally) forming a 2D map by shining a light thru a 3D globe onto a screen. This ray of light can be mathematically curved to calculate and represent different kinds of spherical information.

The azimuthal equidistant world map retains correct distance and direction from one chosen point on the surface of the planet. As it turns out, approach also keeps minimal the other kinds of distortion, like the size and "area" of a distant location, as long as one only maps one side of the sphere. If one goes beyond to the other side of the sphere, the distortions become dramatic. While in the same hemisphere as the point of reference, every kind of distortions remains less than about 22% − which for maps is amazing − and normally much less than that. The distortions are mainly at the periphery away from the center of the map.

The chosen point of reference can polar, equatorial, or oblique. There are good reasons for each of these.

The oblique is the best way to map any specific place, such as a city. The map is usually local, but sometimes the hemisphere or along with distortions the entire world around it. The CIA and US Library of Congress offer azimuthal equidistant maps for various places around the world, like London and Qahira (Cairo). An interesting use is the "hemisphere of land" opposite the "hemisphere of water", that choose the opposite points whose hemisphere has the maximum of each.

The equatorial reference is one arbitrary point on the equator, which becomes the center of the map. The point is normally chosen to fit in Africa and Eurasia on one hemisphere and the Americas on the other hemisphere. The advantage of this is, it looks like a familiar "normal" world map, except it comes in two halves. The lines of the latitude and longitude curve somewhat, but remain comparable and the map highly functional.

The polar reference uses the north pole (or else magnetic north) and the south pole, for a northern hemisphere map and a southern hemisphere map. The advantage here is, the longitude lines become straight lines radiating from the pole center, and the latitude lines become perfect concentric circles around the pole. The equator itself serves as the dividing boundary between the two maps. So while all information about distance and direction is correct from the pole, the longitude and latitude continues to be visually useful at the equator.

The azimuthal equidistant map is from medieval times, and possibly ancient times. In around year 1000, a mathematician from Iran, Al Birani, describes how to do it, albeit the earliest extent map using it to depict the world is from the 1500s by the Al Sharafi from Tunis.

The recent discovery from about a year ago, is by Gott at the University of Princeton. He realized that if one takes both halves of the map, on two sides of the same page, then the distances remain precisely accurate when moving between hemispheres. In other words, the map becomes two sides of the same coin. If one takes a thread from the center of one side, and wraps it around the rim to any point on the opposite, the distance of the thread is accurate. This mathematical property makes the azimuthal equidistant map the most accurate map ever discovered. All distances and directions from the center are perfect, and any point can be triangulated from the center, and even the typical distortions such as area remain minimal. Moreover, it is a visually recognizable map that serves daily uses. The scientists prefer the polar references for northern and southern sides, because it usefully reuses the lines of longitude and latitude.

Essentially, the map works best as a coin, and one simply spins the coin around to get to the side and the angle that is pertinent.

Here is a map of reallife Earth. The two sides of the coin rotate at 90° angles to help recognize the region that is under consideration, and to get a sense of how the map works. The center is the pole, and the rim is the equator. I feel this is the best way to present any D&D fantasy world setting − both for utility and for beauty − and for how its polar point present the world from a somewhat ethnically neutral frame of reference. If necessary, for esthetics, an equatorial reference is ok too, but the polar reference offers a number of benefits. Notice, one can roll both hemispheres like wheels to connect all points on the equator that both hemispheres share. 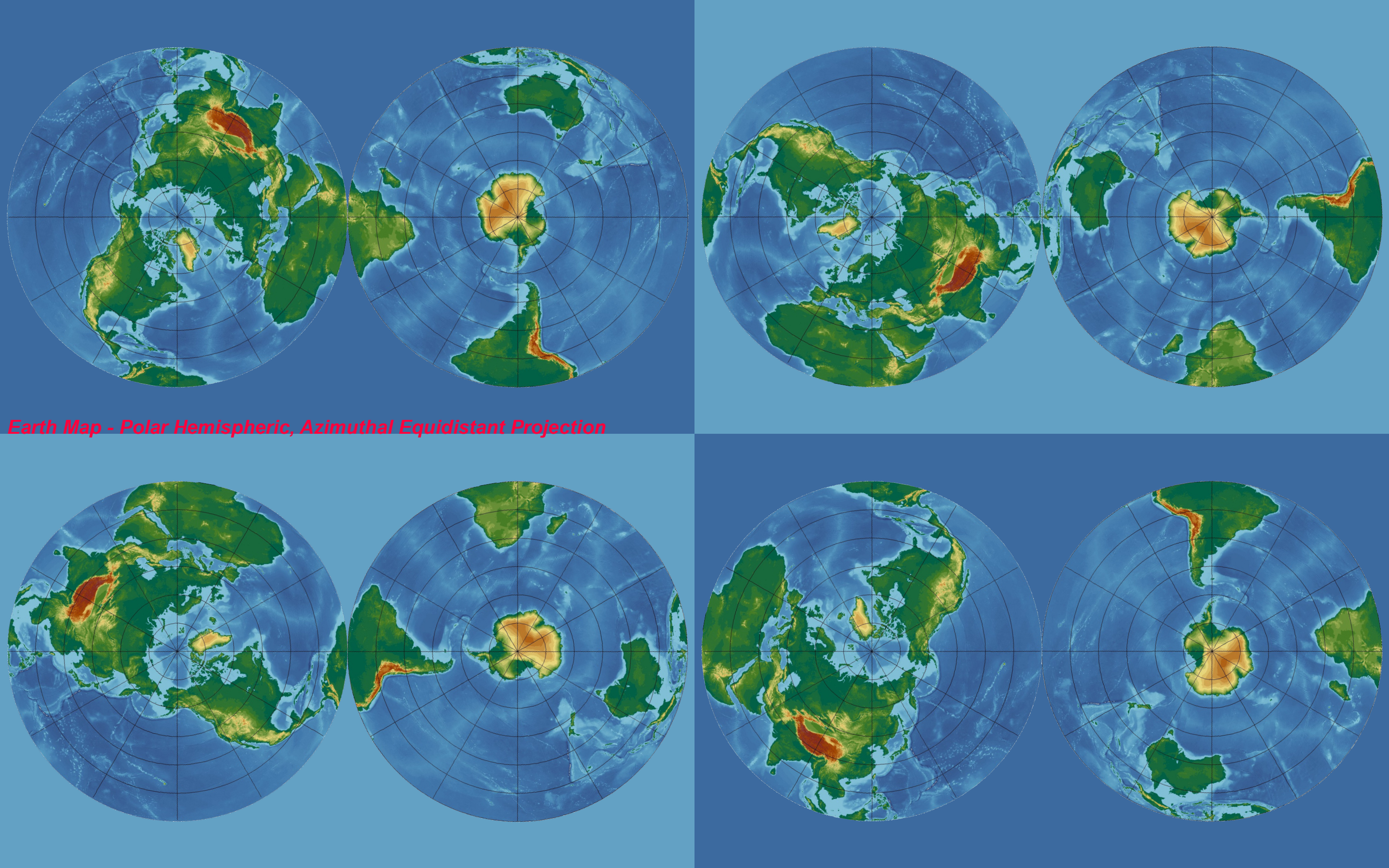 By the way, these Earth maps in the form of D&D dice are all kinds of awesome. Some are even scientifically notable, such as the conformal d4 (Authograph) retaining correct directions at any point and reasonable areas for all land and water, and d20 (Fuller dymaxion) presenting land with minimal distortion. In this context, the azimuthal equidistant projection map is a d2 map, a coin toss. 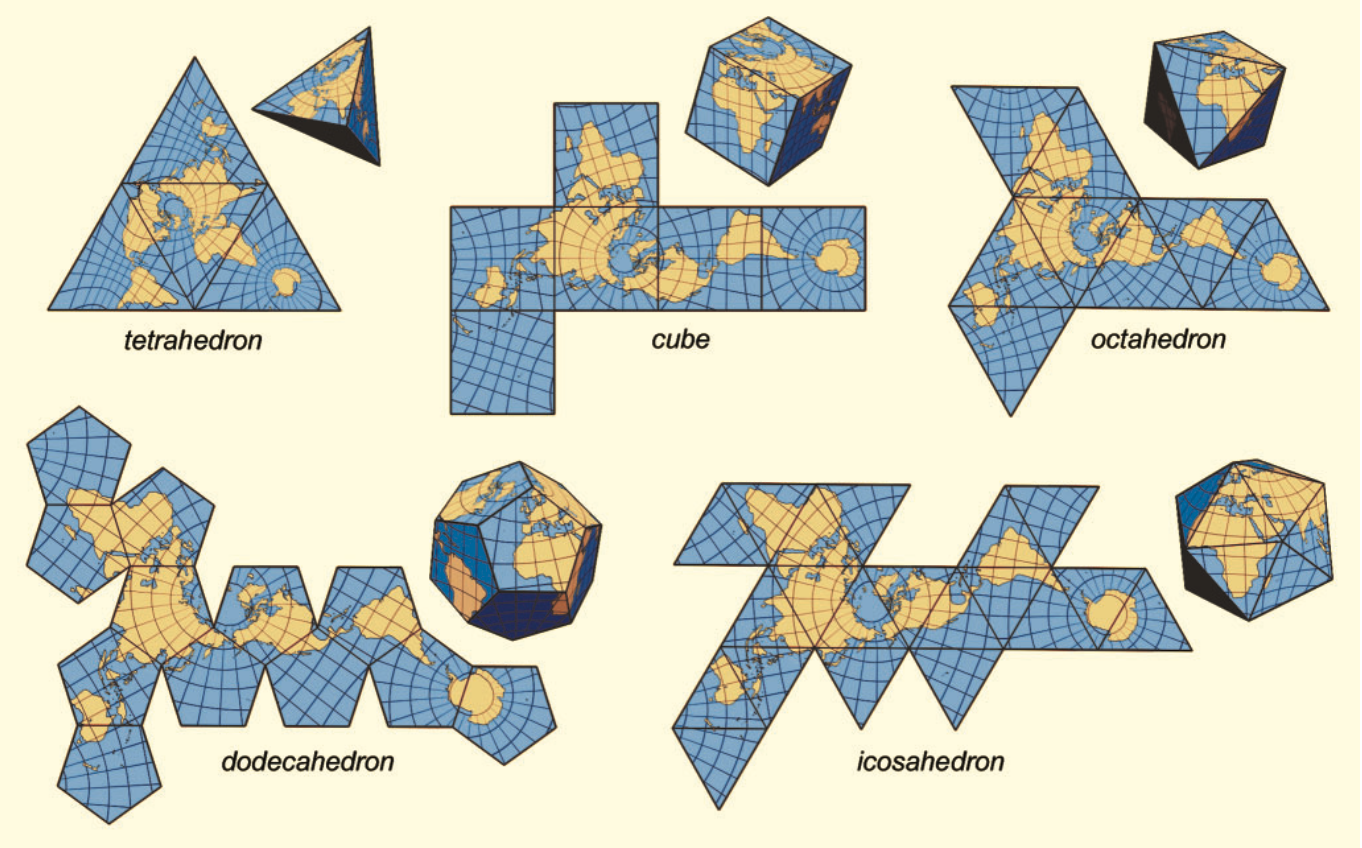 And here is an other nice d20 planet. 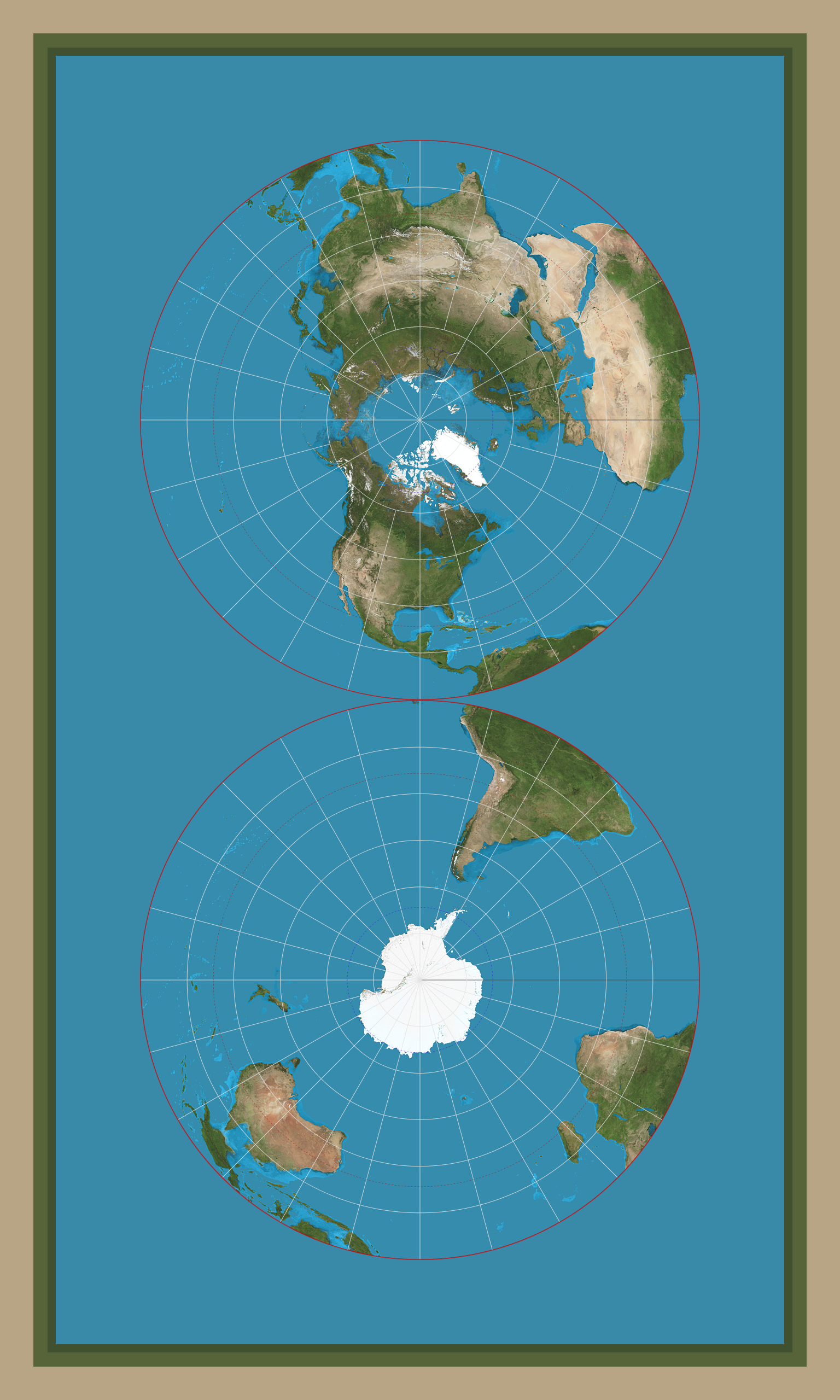