Crock Jon looks at Kaliban, and whispers. "I'm not looking for a conflict, but perhaps it makes sense to keep watch from here? Ensure they keep their distance?" He looks over his shoulder -- is their firelight visible from here? "I'm happy to stay here until they bed down."

As the group plans the watches, Ethian says: “Hawthorne, if you accept, let’s do the watch together. I will be able to allow you to see in the dark for a bit”

“Eh? He seemed nice enough,” Ruznami said, as the others all got super suspicious when Dolman left. “Archimedes doesn’t need sleep,” the dwarf noted. “Archie, go on with Crock Jon,” he instructed the owl.

The small owl took to the night sky, following the others to look over the other fire. The owl fluttered silently closer to the edge of the firelight to see if he could overhear.

Meanwhile, Ruznami tunelessly whistled as he went around the twenty foot area of camp with some thread and other ritual materials, placing an alarm spell that would awaken them noisily if they were disturbed by anyone.

Crock Jon and Kaliban chose to stay watching Dolman and his gang as the (likely) bandits made camp a half-mile down the mountainside from the Black Dragon Agents' own camp. They were soon joined by Archemedes, as the little owl familiar happily flitted back-and-forth between all three locations as the night wore on (only stopping once to catch a vole that had ventured out into the night; now dead and saved for later in one of Ruznami's pockets.)

In this way, Ruznami was able to determine that Dolman had indeed given off any idea of robbing the agents and planned to head down toward Maerin the following morning. The consensus in his camp was that the agents would certainly meet their doom in the mountains. Kaliban and Crock Jon kept an eye on them for a time, until they turned in for the night, and then returned to join the others. Ethian, who was on watch, spotted them far before it even seemed possible (having earlier confirmed that no one else was out there).

Ruznami's alarm allowed them through. They slept in shifts, with doubled watch, still reluctant to let their guard down, even with the magic alarm. No one invaded the camp that night, but Shedrick awoke suddenly with a loud cry. He had been mumbling in his sleep for some moments before, and afterward, all he could recall was an acute sense of having been buried alive. Others too, had a restless sleep, but the details were fuzzy.

In the morning, they packed the camp and moved on, thankful that they expected to find the ruined village by the afternoon.

The night passed uneventfully. No bandits attacked them. So Ruznami packed up his bedroll, finding Archimedes’ dead vole among his things. He let the little owl have his breakfast, though as a spirit, he didn’t actually have to eat, but form often dictated function, so the owl still behaved as such. Packed up and ready to go, he dug out his spellbook to prepare for the day while the others finished breaking camp.

Crock Jon wakes, stretches, and goes to find a tree to pee behind. He wipes his rough hands on his trousers as he returns, and helps pack the tent and take whatever supplies he can to lighten the load of the adventurers.

The morning was brisk but clear. The group made their way further northward, heading up into the higher peaks. Around noon, they had stopped near a stream that tumbled down over the rocks, creating a cold spray on the face as they filled their waterskins. Finally, in the early afternoon, what was left of the old road widened into the main street of the abandoned mining village. They had found what remained of Vermeillon.

The village was eerily quiet. Plants and wildlife had overtaken the crumbling houses. Leafless vines climbed rotting walls. Birds and other small creatures nested in the exposed rafters, and gnarled trees protruded from the fallen roofs of a few of the buildings. The sky, now overcast, added an air of oppression that seemed to envelop the village in a melancholic haze.

Directly ahead, the road split into two trails as they wound around either side of a hill upon which stood a grand two-story brick house. The manor had fallen prey to time and the elements like the rest of the village, but it remained in better shape than many of the smaller houses. Heavy wooden double doors were flanked by dark windows, and chimneys anchored the building at each corner; their masonry crumbling.

In front of the house at the 'V' in the road, loomed a wide, leafless tree. Its gnarled branches reached toward the clouds like twisted fingers, and its rough bark was pockmarked with large knots and beetle holes. 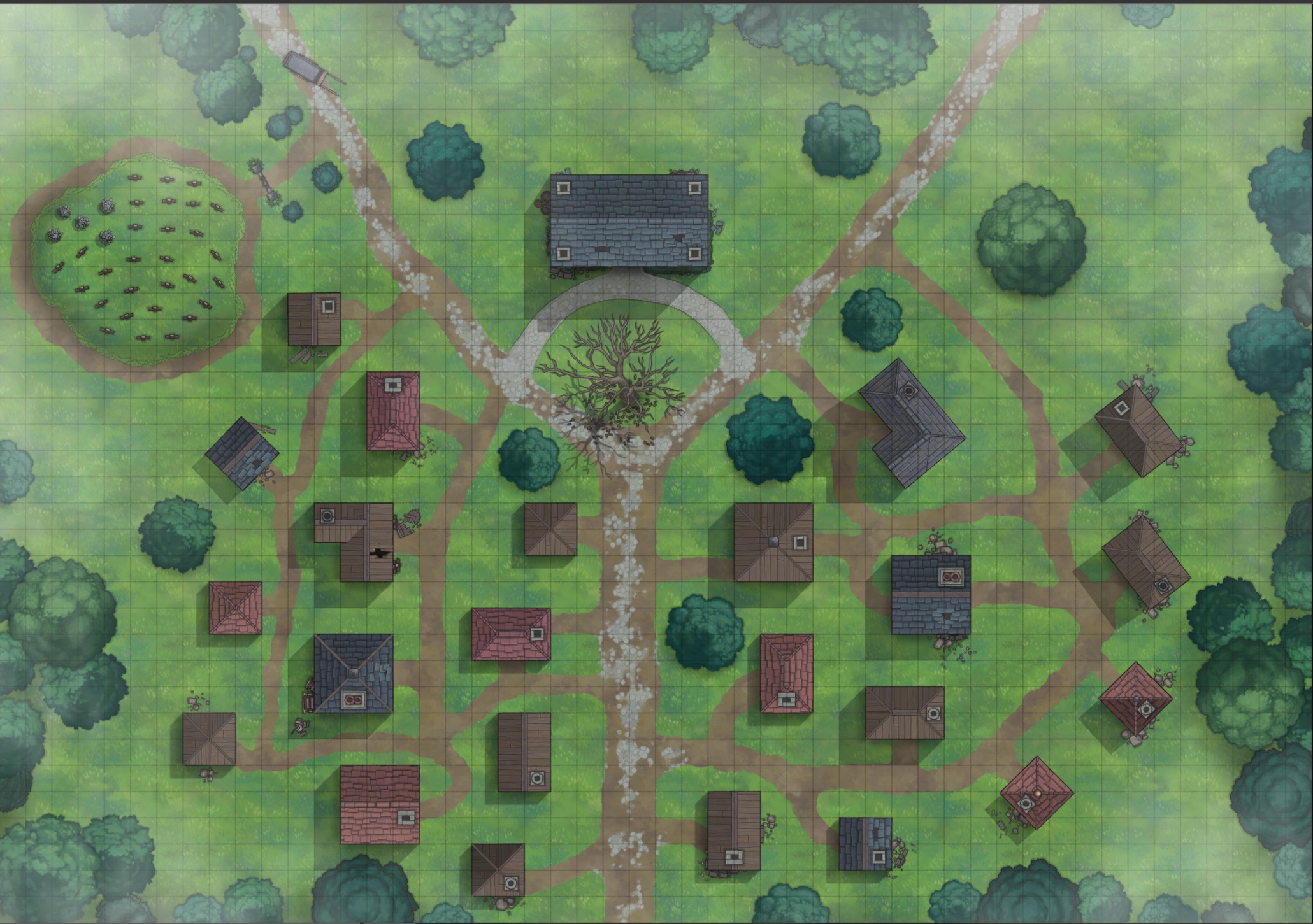 Kaliban gathered around the others and surveyed the village. It had seen better days. Kaliban kicks at a couple pebbles and loosens his sword in it's scabbard. He looks to Hawthorne.

"So what should we do first? I know the mine is your priority but doing a quick search of the town might be prudent."

Supporter
Hawthorne nods in response to Kaliban's statement, and he looks out across the ruined village, upon which he spies the old leafless tree standing in front of the old manor house. "No rush to get to the mine, as far as I'm concerned. Especially considering the rumors of ghosts and spirits... a search of the town would probably do us good just to see what's still here. But I'd recommend that everyone be very up front about anything they experience, though... if you think you see something out of the corner of your eye but it vanishes or whatnot, don't keep it to yourself. We're going to need to keep up on all the visions we experience, in order to hopefully put things to rest."

He takes a few steps forward on the main path heading into Vermeillon, and motions to the large tree while turning to their dwarven wizard. "Ruznami... you were asked to look for a tree by somebody, weren't you? That one there seems to have the most presence in the village, right there in the middle. You think that's the one you want?"

Crock Jon walks up the central road, and places the bags he is carrying beside the old, impressive tree.He'll stay with the supplies unless instructed to go elsewhere, or if he hears a commotion.

Ethian is attentive to any details that may give clues to the presence of ghosts, spirits or undead. He looks at the manor and tells the others: “that the most defensible building here. We should clear it, and set up camp there.”

"Hawthorne, would you like for me to mask our presence again?" Argenti Inquires. "Either way, do you suppose we should start investigating with this first house here, on the left?"

Supporter
"I think Ethian makes sense... that manor looks in best shape and could give us a good view of the rest of the village plus perhaps have the most comfort as a staging area. If that's the tree Ruznami needs too, then it's right there."

He turns to Argenti and gives a little shrug. "If it doesn't tire out your resources too much I suppose we could... but I don't know how necessary it might be if we are the only living beings here. I trust you to make the best call for what you can do."

“Yes, that seems to be the tree,” Ruznami told the others, consulting Lukas’ map. “That puts the cemetery over there,” he indicated.

Ruznami headed toward the tree. He nodded to Crock John, who had taken up sentry there over the group’s supplies. The dwarf searched for the hollow of the tree and the necklace it was supposed to contain.

The Agents headed up the main road for the old tree and the manor house. As they did, a cold wind blew through the town, causing shutters to rattle like chattering teeth. Between two buildings, they could see a third, larger building with a sign swinging crookedly from a single hook. In better times, it must have been a shop - the sign featured a wand crossed with a blacksmith’s hammer.

Looking at the manor house, Ethian thought for a moment that he had seen a figure standing at a window on an upper floor, but he blinked as a spot of rain hit his eyelash, and it was gone - or perhaps had always been a smudge-mark on the glass in the shape of a man.

Crock Jon and Shedrick placed their supply packs next to the old tree while Ruznami looked about it. On the west side of the tree was a hollow knot, about 5 feet above the ground and filled with dead leaves and empty nut shells. Ruznami dug out the dried decaying mass, and found resting within the hollow, a delicate necklace: a thumb-sized platinum oval pendant threaded on a thin chain inscribed with “For Lorna, Forever” in a careful script. 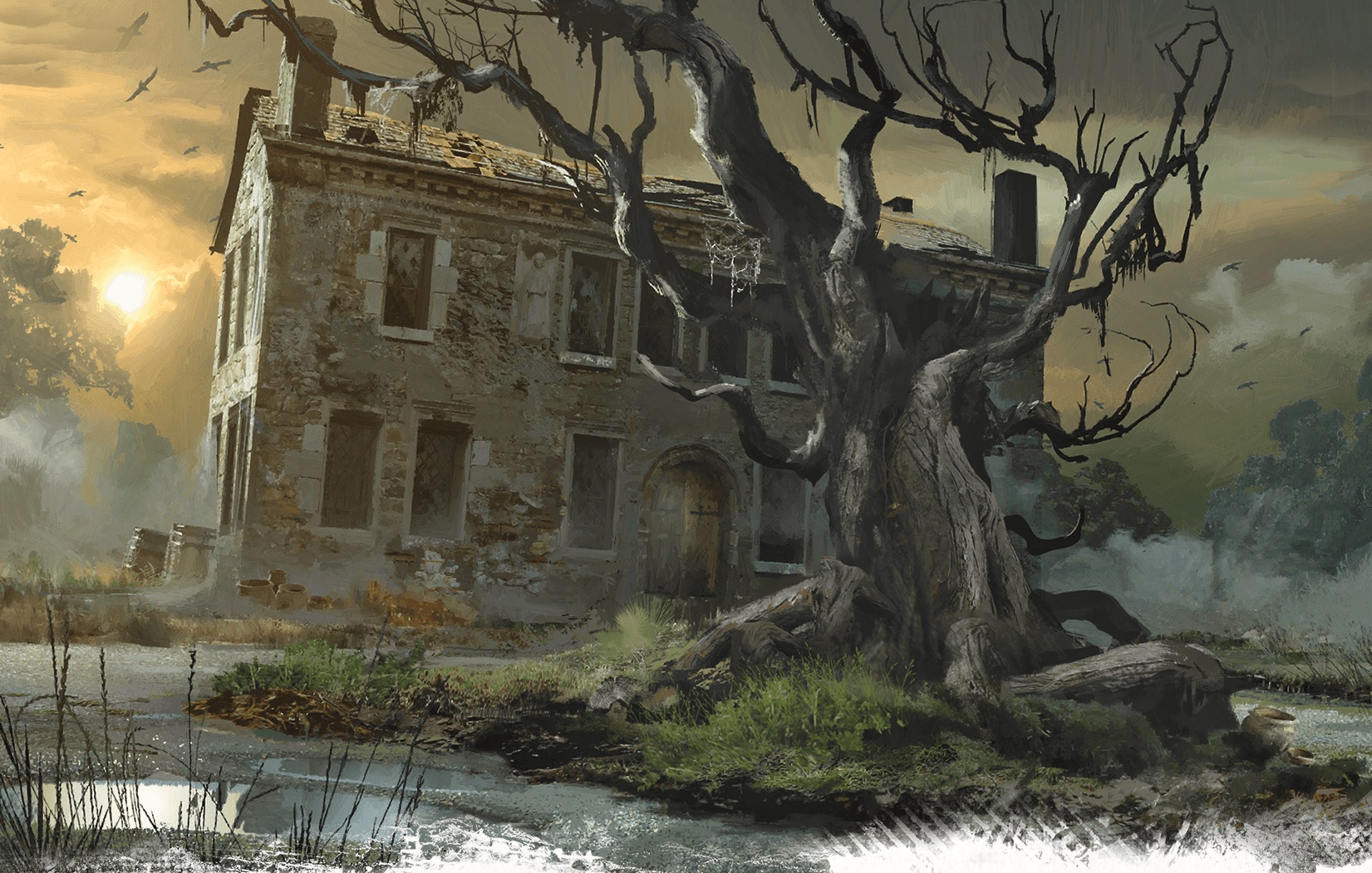 Ethian does a double take on the shadow he may have seen. He raises his hand in a friendly gesture in case he is being observed and says: "Companions, we'll need to be civilized and knock at the door. I think I saw something move inside the manor. If you agree, I'll knock and announce who we are."

"This must've been some place, back in the day," says Crock Jon. "To have a magic shop'n'all."

Supporter
"Inside the building, you say? Huh. Squatter or figment both seem likely and possible at this point. I agree knocking would be the best course... to let a squatter know we're here and to make a hasty escape if they wish to avoid confrontation. And if it's a figment? A rapping on wood won't make a lick of difference." Hawthorne half-smiles to the high elf.

He then glances over towards the tree as the dwarven wizard digs through the knot opening in the trunk, throwing leaves and other detritus to the ground. When Ruzmadi pulls out the pendant, Hawthorne nods in admiration. "Well, that's one duty taken care of. But I suspect that might end up being the easiest of them all." Turning back to the manor and pulling his coat a little tighter around his neck as the winds blow by... he motions to the manor with his chin. "Let's go see who is home, shall we? I'd like to get out of this cold if nothing else. Maybe get a good fire going in the hearth if the building allows."

Ethian returns Hawthorne's smile and nods. He then proceeds to knock at the door, steps back and says: "Greetings, we are agents of the Black Dragon Gate Mining Consortium. We are here to investigate the disappearance of this town and mine. We seek refuge and information."

He then waits to see if anyone opens the doors and listens to hear any noise coming from the inside.

As the sound of Ethian's rapping knock faded, for a moment, there was nothing but the sound of the wind on the loose tiles of the roof, and the dripping from one of the gutters. Then, suddenly, a blood-piercing scream came from somewhere inside. The others were not as sure, but Ethian and Hawthorne were convinced that it came from the second floor, near the back, on the west side.