Kobold Stew said:
"Shall I try to grab 'im for yuh, sir?" he asks waving his arms in hopes of distracting the creature for the professionals.
Click to expand...

Ethian lets the others pass first and then runs down the stairs. He voices his agreement to Crock Jon :"Go for it!". He stands ready to strike should the creature turn hostile.

"Shedrick? Are you hurt?" Argenti asks as she makes her way to the top of the stairs, ready for trouble.

Everyone rushed for the stairs. The creature was grabbing at Shedrick with its claw-like hand. While Croc Jon thundered down the creaky steps, Kaliban leaped over and telekinetically lifted the lad away, placing him safely near the open front door. The creature looked about in dismay and shrieked - the chilling sound like a woman in distress. It ducked as Hawthorne fired a crossbow bolt from the top of the stairs (it was more a warning shot than an attempt to harm the thing) and as it found itself increasingly surrounded, it stepped back into the shadows under the stairs, folding them around itself.

Suddenly, it was by Shedrick again, in the shadow of the front door. Thankfully, instead of grabbing at the lad, who now had his sword out, it ducked away from him and out the door, but it was obviously distressed by the daylight, and it covered its face with a malformed arm and stumbled on the stoop while making shrieking noises. 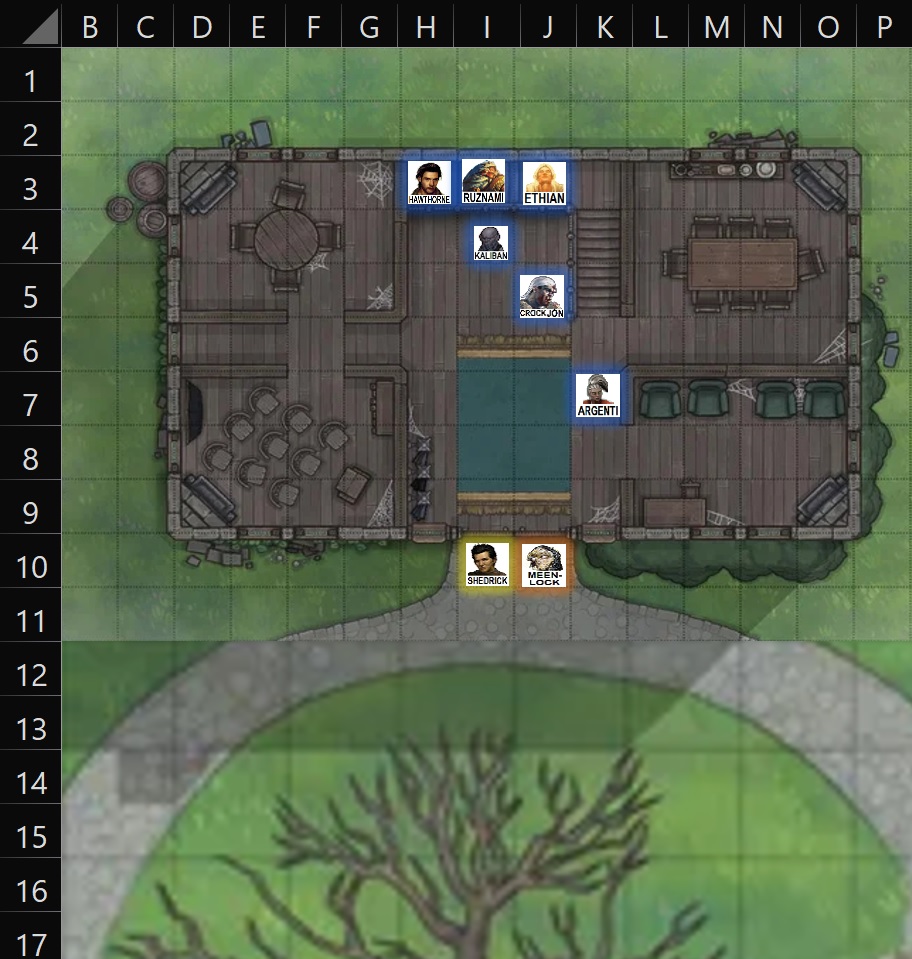 Shedrick had opened his mouth to complain to Argenti about his ribs, which were sore from where the creature had pinched him when he'd flown through the air to the door.

When the thing appeared beside him in the doorway, he called out, "Ah! It's over here now!"

Supporter
Crock Jon sees the creature at the doorway, and sees it resist the daylight. He steps up to it and attempts to grab it. If he is successful, he begins to walk it outside into the light, away from shadows.

Ruznami clambered further down the stairs, nearly reaching the bottom, but he could see the creature now holding Shedrick. Argenti was a bit in the way, but the dwarven mage lifted his wand and swirled it, gathering fire and shooting it at the creature.

Kaliban blinks as the creature vanishes again in the darkness. He turns at the yelp of Shedrick and moves towards the creature. Once he gets close he waits, only striking if it breaks free from Crock Jon's grasp.

Supporter
"What in Mount Celestia's name is going on down there?!? Shedrick, when in the hells did you learn to fly?!? Does my father know you had that magic and just never told me, because I would be very disappointed in being kept in the dark about something like that!"

If/when the folks in front of him on the stairs make their way down, Hawthorne follows. Otherwise he remains where he is at the back of the line.

Hawthorne followed Ruznami down the stairs, frustrated that the dwarf moved so slowly. Having passed the landing, the dwarf mage suddenly sent three small balls of fire hurtling over the heads of Argenti and Crock Jon, as the latter crossed the foyer to catch the fleeing creature.

Two of them struck the creature, who wailed in pain and anguish as Shedrick ducked past it, rushing back into the house. The third went out the front door and scorched its way along the damp grass under the old tree. "Aah!" called Shedrick, "Please don't burn me, sir!"

Crock Jon, Ethian, and Kaliban surrounded the creature and the half-orc brawler wrapped his big arms around it, lifting it off its feet in a bear-hug. He hefted it into the daylight, and held it tight. The thing struggled in vain, making loud screeching noises. 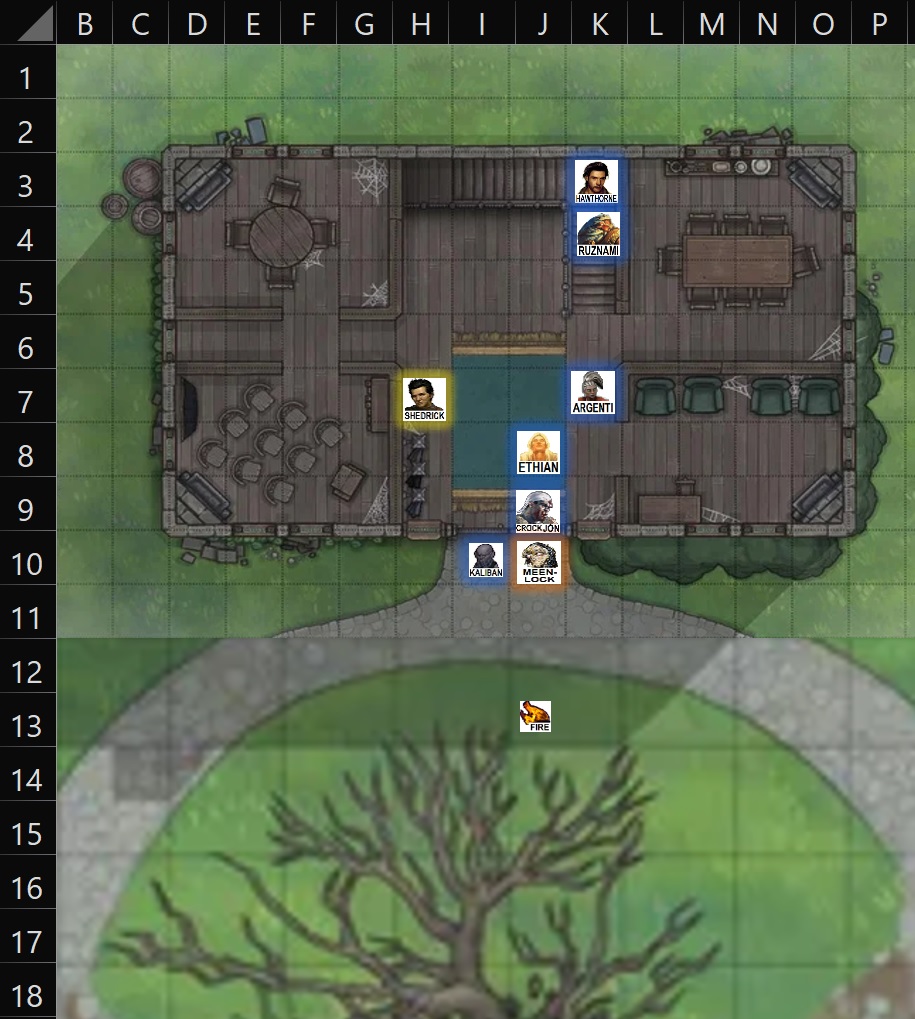 Supporter
Crock Jon squeezes tight, as the creature's unearthly howls let loose into articulate speech. He tries to punch, but its squirming challenges him while he holds on.

Argenti furrows her brow at the creature, attacking the help is just bad manners.

"Malus." The genasi condemns it while casting an evil eye, before casting one of her glowing green stones at it. "Hya!"

"Do you need more assistance with that?" She asks coldly, readying to strike.

Ruznami rushed down the stairs and pulled his warhammer as he approached the creature held by Crock John. He swung at the creature to try and put it down.

Supporter
"Hey now, hey now! Let's not go overboard, people! No need for senseless killing, we did invade its domicile after all. If Crock Jon has it restrained we don't want to aggravate or frighten it any further, especially if it can manipulate or project emotion like Ethian said upstairs."

He walks across the the main hall of the house to the front door, taking a moment to place a hand on Shedrick's shoulder and look into the lad's eyes. "You all right, Shedrick? Bit of a fright there, eh?" He gives the shoulder a squeeze of support, then continues on outside the house to where the creature is being held by Crock Jon. Hawthorne walks right up to it and says with a loud and strong voice "Now... let's see who you REALLY are!" while reaching his hand up to the creature's neck as though to grab the base of a mask.

He then suddenly stops and turns to the rest of the group with a slight smile. "Kidding. Just kidding."

Hawthorne's joke reflected a mystery-comedy puppet show that was popular in Baldur's Gate, where the "ghost" was revealed in the end to have been the Grand Duke's gardener, much to the surprise and delight of the audience. It had been so popular, that it had spawned knock-offs, homages, and pastiches, all more ridiculous than the last. Shedrick, who had been shaken and frightened a moment before, burst out in laughter, then replied bravely, "I'll be all right, sir!"

Crock Jon held the creature fast. It tried to pinch at him, but he had its arms held awkwardly, and he stepped into the sunlight, where the thing couldn't bend shadows to escape. It twisted its head, trying to shade its strange eyes from the light while making piteous yet bone-chilling wails.

Crock Jon feels flies on the creature he holds bury into his skin, or so he imagines. His muscles lock up, but he holds on tight.

Ethian pushes back the magical fear emanating from the creature. The compassion he initially felt is being replaced by anger. “Why don’t you yield!” He states in anger as he continues to assist Crock with thr grapple

Kaliban continues to stay near Crock Jon and the restrained creature. He feels the waves of fear emanating from the creature and stays cautious ready to intervene if it attempts attack their group again.

Argenti sees Hawthorn go for the creature's neck, and takes that as a signal to press the attack. The glowing green rock grazes just past the creatures head immediately after Hawthorn says he was kidding.