Argenti covered Ethian and Hawthorne as they moved through the moss-covered floor of the chamber. Ethian went to have a look at the tree's gnarled roots. A dark, amorphous shape moved in the shadows in the depths of the root-mass.

Meanwhile, Hawthorne took a look at the stains on the stone slabs. To his dismay, they did appear to be blood. Or perhaps worse than blood? A scrap left on a slab appeared to be human skin, shed like a snake.

Cairn moved down the slope into the room and picked up what he thought might be a chain. It was more like a rope. As he pulled at it, it lifted out of the moss, where it had been hidden. At his end, it held a box with a T-shaped plunger, and the other end appeared to be attached to a large candle that was burrowed into the support pillar.

Supporter
Crock Jon has been holding back, chastened by his defeat. He's carrying anything people want carried.

Ethian points his sword at the figure moving in the roots "Come out whomever or what ever you are!"

Argenti's eyes and amulet glow with the same emerald pulses of her rock that is held at the ready.

Sure enough, the shadow shifting under the tree roots proved to be a dark ooze, which began to slither out toward Ethian. 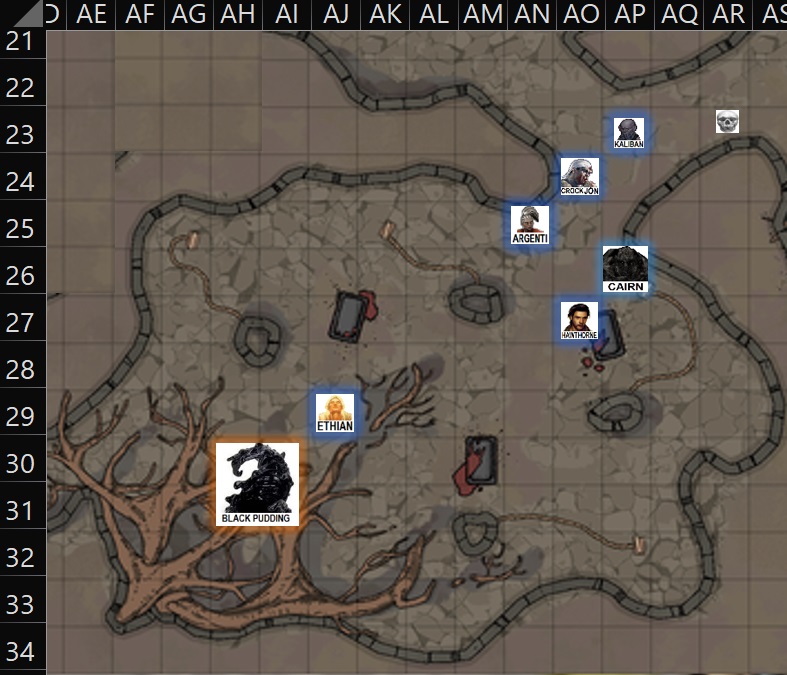 Supporter
Crock Jon is cautious, but he owes it to his employers to protect them. "Keep your distance, suh." He makes eye contact with another in the party, adding "Suh."

He reaches for his net, and approaches with the only weapon he carries other than his fist. He throws it -- really just throwing it on the ground, so large is this thing, hoping that it could not easily make its way through the webbing of the net. What good could a net do, he wondered.

Argetni lets one rock fly as the pudding comes into view "HYAH!" And quickly follows up with another "HWAH!"

Both rocks land solidly within the ooze, sending waves throughout the creature, and causing parts of it to splash on the walls and celling of the cave.

Crock Jon stepped down the steep slope into the chamber. Though the moss was not as thick here as it had been in the hallways (at least it did not hang down in front of his face), he still needed to slog his way through it. He was too far to throw his net, and it had become tangled during his earlier struggles.

Argenti spotted the ooze for what it was, and began to fling glowing rocks at it that splattered through its shifting mass.

Kaliban wades through the thick moss. He curses as he is unable to close with the enemy and support Ethian.

VLAD the Destroyer said:
Also I can't remember if we had a short rest before this encounter. Just want to see if I have my action surge back.
Click to expand...

Supporter
(CJ will dash, and hopefully the fumble can be forgotten for round two).

Kobold Stew said:
(CJ will dash, and hopefully the fumble can be forgotten for round two).
Click to expand...

Ethan doesn’t want to touch the ooze, but he doesn’t retreat so the creature won’t target one of his companions. He instead moves into a fully defensive stance as he instead implores Sehanine to strike it.

Cairn moves forward and as he gets close he calls out to Ethian
"Move back, Ethian-leader. The guard should take the creatures like this."

Invoking a rumbling long-drawn word, he takes more of the stones around him into his body, towering over Ethian. He slams his fists together and then downward into the creature with two earth-shaking slams.

"It, the black mass, is slow. May not be danger, why are we, the group, attacking it?"

Supporter
"What in the?!?--" Hawthorne exclaims, as the black mass rises up. He immediately reaches for his crossbow and locks in a bolt while moving into the chamber and ducking behind one of the pillars to hide. [Move to AQ29]

As the action of combat goes on through the chamber, he takes a second or two in hopes of his location being forgotten before popping out to fire his crossbow at the mass. It finds purchase and causes a slight puncture to it.

Having taken a walloping, the black amorphous creature slithered back into the darkness under the tree roots. In trying to see where it was going, Ethian noticed a tunnel hidden in the shadows and tangled roots to the right. 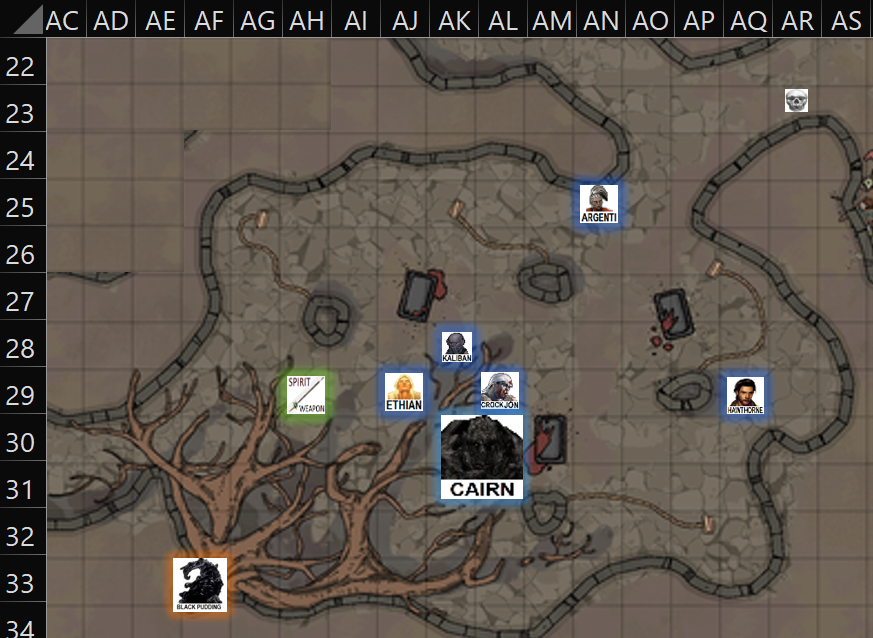 Supporter
Crock Jon watches the black ooze disentangle itself from his net, leaving it dry and lying on the ground. He'd been foolish to try. He picks it up and wraps it again around him.

"Did we win?" Argenti asks with a bit of confusion.

Cairn forces his bulk through the foliage and slams his hands into the retreating slime.
"The black thing attacked. It can do so again. When we, the explorers, cannot afford it to. Protect the boss. Protect the leader."

Neurotic said:
Cairn forces his bulk through the foliage and slams his hands into the retreating slime.
"The black thing attacked. It can do so again. When we, the explorers, cannot afford it to. Protect the boss. Protect the leader."
Click to expand...

Ethian Nods, and channels divine energy towards the creature and directs the spiritual weapon to strike at it too.