In this article, we're going to take a look at some of the changes to spells and magic in Level Up. Most of these changes are ease-of-use changes for clarity, but there are some minor structural changes. We'll use fireball as an example of a spell while discussing these changes. Note that this is early in the design process for this part of the game, so things might yet change, and your feedback as always will affect that. 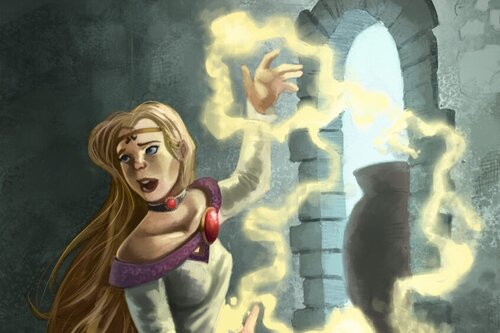 A fiery mote streaks to a point within range and explodes in a burst of flame. The fire spreads around corners and ignites unattended flammable objects. Each creature in the area takes 6d6* fire damage.

Cast at Higher Levels. The damage increases by 1d6 for each spell level over 3rd.

Rare: Ravjahani’s Blackfire. This spell’s silent black flames deal necrotic damage and don’t damage objects or leave marks on bodies. Any nonmagical flames in the area are extinguished. The spell has no vocalized component.

The first thing you might notice are the words under the spell name. For fireball, those words are evocation and fire. These are the schools of magic to which fireball beyonds.

Wait! I hear you say. Fire isn't a school of magic! Well, this is the first of our changes. The 8 classical schools of magic, as defined by wizards long past and handed down in formal tradition, all exist as you know them: evocation, divination, necromancy, and so on.

But that formal classification isn't the only way magic-users throughout the ages have labelled spells. In the multiverse there is a near-infinite array of spell schools; some are based on elemental sources (like fire, water, shadow, plants, beasts, and so on), while others are based on effects (healing, compulsion, and more).

Let's look at a couple of other spells and how they're classified.

The components entry has changed slightly, too. V,S,M are used in the same way, but their meanings have been expanded to Vocalized, Seen, and Material. Different spell casters may cast spells differently -- a Vocalized spell is apparent to creatures that can hear, but might be a bard's song, a wizard's incantation, or even a musical instrument.

We make mention of material spell components to add flavor to the game, but if there is no price listed for those components, they are simply considered part of your spellcasting pouch.

One fun thing we're introducing is the concept of rare spells. Not all spells have rare versions. You can't choose rare spells out of the rulebook; you have to find them. They might be found in a treasure hoard, or in the depths of an ancient library; a rare spell might be the motivation for a quest. These rare spells -- which are all named after a famous spellcaster -- are better than the 'regular' versions, and are highly sought after. If you know a rare spell, you can memorize it instead of the regular version.

Of course, we have a whole bunch of new spells to add to those in the core rulebook, but you’ll have to wait to see those!


*Let us know what you think of the 6d6 fire damage! We haven't changed most spells fundamentally (other than clarity rewrites) but this is one of a few that we're considering.

Starfox said:
I have a problem with variant spells that are simply better. My game world is socially advanced, more renessance than dark ages. Wizards form guilds to share spells, and there are libraries and bookshops where spells are available at a price. If there was a version of Fireball that was just better, it would spread through these networkslike wildfire - in a few years no self-respecting wizard would be using the old, lesser version.
Click to expand...

Then don't put them into your campaign, the game will still be fine without them. Apologies if that sounds trite, but your issue with the variant spells is that in your homebrew world they would spread quickly, which is of course a fact relevant to your world - and is therefore subject to change by you, or to look at it from the flip-side, is an issue you nevertheless choose to keep in your world. In the latter case just leave the variant spells out, or do something imaginative such as have them 'imprint' on only those casters who have been through some sort of trial to master them - so they cannot be casually shared. There are a number of ways to have them in your gameworld without them becoming the standard, but I really don't think they should not be in the rules because of the corner case of your homebrew world setup.

@Morrus This does however raise an interesting point - perhaps you could have a sidebar explaining how such spells might be introduced into a setting and remain rare and special even where magic is more ubiquitous?

When I say that such-and-such would be trouble in my games, I am not saying it because I want Level Up to be done precisely for my table - I say it because I imagine these things could be problems for others as well. I do not demand that my concerns be acted upon - I just want to raise these concerns for consideration.

That said, I find it funny that my statements about a renaissance game world are met with remedies that would require Victorian or even modern levels of social complexity.

tetrasodium said:
Some level of fear of hp attrition does not make a game "a resource managing game" & is far from it.
Click to expand...

The rules present a default in different categories, resource management is one such a category. You seem to want more resource management, I want less. Both are valid views. Just as I don't want rules creep in the direction of more resource management and argue against what I see as you trying to get that into the rules, you argue the opposite. This is not a reason for name-calling or bluster, it is just about small, marginal changes that are easily houseruled.

5E as published is a game without much memory from session to session (assuming a long rest between sessions). I quite like that, as it makes the game easier to run, and I think this is a good default mode. Of course, some things do linger (death, petrification), but the fewer the better, in my view. But I can understand the desire for a gritter game with more serious consequences - you can go all the way to Harnmaster where even minor wounds could lead to death by infection months down the line. Or you could go the other way to Toon where getting "killed" forces the player to leave the table for 1 minute and then return at full health (from memory). Its a full spectrum of tastes with no "badwrongfun". I just happen to like the default assumptions of 5E and want to keep them in a game that purports to be a development of 5E. As 5E is a very popular game I assume that the premises it is designed on are also popular and should not be casually changed.

Optional rules present in a game should be as self-contained as possible. That is, one optional rule should be able to stand on its own without forcing other changes to the game. This allows players to consider each rule for inclusion individually. Thus I think that a rule with grittier healing should contain any needed changes to spells in that rule, and not change how spells in general work.

Starfox said:
When I say that such-and-such would be trouble in my games, I am not saying it because I want Level Up to be done precisely for my table - I say it because I imagine these things could be problems for others as well. I do not demand that my concerns be acted upon - I just want to raise these concerns for consideration.

That said, I find it funny that my statements about a renaissance game world are met with remedies that would require Victorian or even modern levels of social complexity.
Click to expand...

Ah fantasy ttrpgs and D&D in particular completely throw the timeline of tech advances and social evolution out of the window. It can jar a little sometimes if you are aware of it, but ultimately as long as it works at the table then it is of little consequence.

Caliburn101 said:
Ah fantasy ttrpgs and D&D in particular completely throw the timeline of tech advances and social evolution out of the window. It can jar a little sometimes if you are aware of it, but ultimately as long as it works at the table then it is of little consequence. I do wish there was more bronze age stuff that was more swords and sorcery and less Mythic Greece - take 19 with a little pseudo Roman thrown in, or indeed if someone would NOT have Vikings everywhere... But people like the familiar, even when it's overcooked...
Click to expand...