One of the new TSRs (yes there are now two TSRs!) has announced a reboot of Star Frontiers, the sci-fi game made by the original TSR back in the 1980s. Star Frontiers was a percentile dice roleplaying game set in a galaxy with four races (Human, Dralasite, Vrusk, and Yazirian) which were re-used by WotC in d20 Future in 2004.


Happy to announce that in addition to our flagship new world and game system by James M. Ward & Dinehart, GiantLands, and Justin LaNasa's children's RPG Tales & Tots, our next internal project "Star Frontiers", a reboot of the original, is currently in preproduction and has Larry Elmore attached. Stay tuned for more details!
It appears that one of the new TSRs registered the trademark in April. More if I hear it!

You can currently buy the game from WotC on DriveThruRpg, so I'm not sure how that works. When asked about this on Facebook, one of the TSRs answered:

Of course, Evil Hat Productions registered the Star Frontiers trademark, too, back in July 2017. 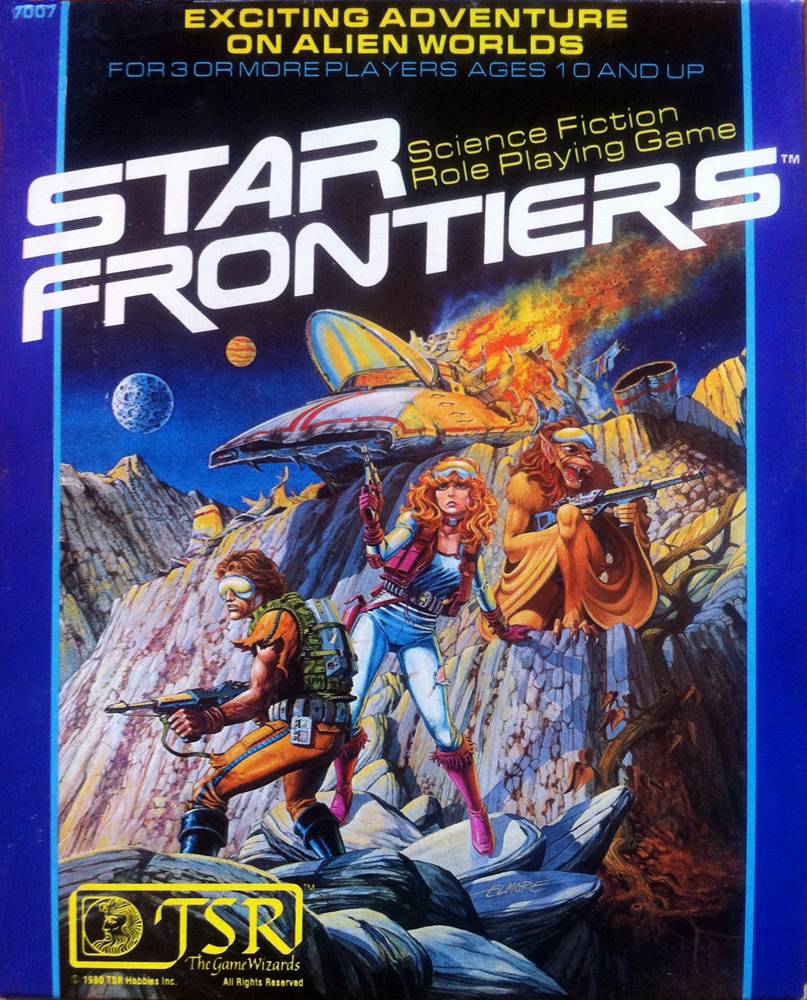 Last year, Sasquatch Game Studio announced that it had acquired the trademark for TSR's old Alternity science-fiction game. At the time, it was mentioned that they did not have the Star*Drive, Dark*Matter, Gamma World, StarCraft Adventures, or Star Frontiers, properties owned by WotC. This may... 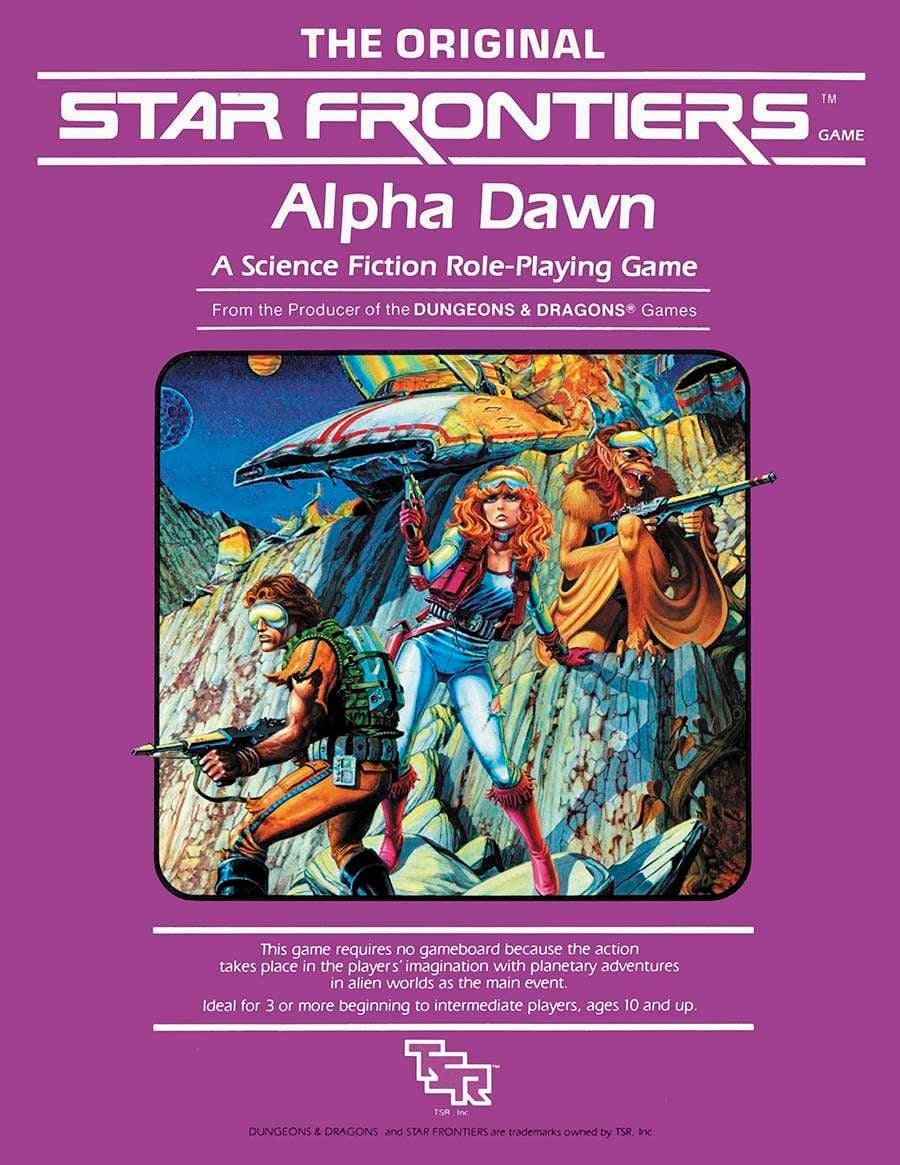 aramis erak said:
The other thing to remember: The relevant laws are those of Wisconsin, Washington, and US Federal. WotC is in Washington, the registration is by a company in Wisconsin, and it is both federal trademarks and interstate. There are a lot of varying rights issues that laymen like us can observe, but don't know the actual details of.
Click to expand...

I see customers complaining all the time that WotC doesn't reflow the text from older products into a modern layout program to create a clearer version of the product, instead of relying on sometimes substandard scans. But if the scans are the point, for maintaining continual use of all those old assets, there's good reason why they might not want to.

That also may impact what, if any, reprints we get in 2024 for their 50th anniversary celebration.

Hope they have some agreement with Wizards over the trademark, or TSR is going to get "acquired" by WotC again!

Maybe that's their goal for the quick cash grab lol

Focus, people.
Instead of writing "oh noes what about teh copyrights" we should be writing OMG YOU GUYS THEY ARE REBOOTING STAR FRONTIERS!!!

UPDATE:
Well, nevermind then. What a shame.

I concede the point. But still.

In other threads we would get all kinds of excited, rampant speculation about whether or not a Warlord will be included, or whether hit points are a type of philosophy. But instead we're getting....copyright law.[1]

1. Disclaimer: I have no problem with copyright law, or the discussion thereof. I'm just a little bummed about the lack of laser guns and Sathars.

LOL! I was just...as in seconds ago... working on various automation scripts for my Star Frontiers game on Astral VTT. Ran my last game of Star Frontiers about...three years ago ( Just Another Cog - A Star Frontiers Campaign | Obsidian Portal <--not much on it, but there it is anyway). I absolutely LOVE Star Frontiers!

Have since it came out in '82. I probably count it as the second most GM'ed game I've done after "D&D" (various flavours), with Gamma World getting a close third, tied with Powers & Perils. My "Just Another Cog..." is actually still "going"...hence, my getting Astral VTT up and ready for me to start it back up again in the next couple months (crosses fingers!).

Star Frontiers has a pretty active fan community...well, it did, before the WotC folks got involved; before it was a mutual "Ok, whatever...", but a few years ago they sent a letter of "Ok, uh, stop now. Because...reasons". I guess we know what those reasons were now, huh?

Star Frontiers Remastered, with the 24'ish issues of The Star Frontiersman is what I use. Basically a semi-pro re-working of Star Frontiers, with fixed errors, updated some rules, some changed/additional art, etc. If anyone has those PDF's and PoD's (like I do), count yourself blessed!

As an aside...I have...uh... "less than favourable expectations" if WotC does a re-boot. They'll mess it up in probably far too many ways. I hope I'm wrong, but I can't see it. They aren't in the business to make good games...their in the business to get you money, then when it start to run low, do a 're-boot' to get money from new people; rinse and repeat. (yeah, I'm a 'big' cynical...sue me! ).

The main/original guy handling the Star Frontiersman and Star Frontiers Remastered was a bloke by the name of Bill Logan. He has his own company, DwD Studios | Raise your dice hand high! , and he did do his own version of a space game inspired by Star Frontiers. He started this when he got "The Letter" (re: WotC saying "Ok, we changed our mind...stop..."). While I do not own his "Frontier Space" game, I am tempted, just to see how it turned out.

But seriously... "Star Frontiers Remastered" and "Star Frontiersman" magz and you are all set for another 40 years of space gaming action! Good luck trying to find someone selling theirs, but if you can, GET IT!

Given the one name listed... James Ward... And that Mr. Ward is in ill health...

And, given that they literally reused the same art as the original in the filings, litigation is a safe bet. It won't be good for them, even if they prevail.

Also, being still commercially available, that blocks the US Copyright Recovery Act.
So, a new game, or a total rewrite from scratch (mechanics are NOT protected in the US via copyrights, only the exact literal wording), or a lawsuit magnet from hell which will bankrupt them?

Nothing to get excited about except the fireworks to ensue.

If they can't use any of the existing Star Frontiers IP, what will make it "Star Frontiers?" Are there a lot of people who fondly remember the system? I don't recall ever hearing a peep about it, during its time or since, whereas I think everyone on this board knows, in contrast, that Traveller characters can die during character generation.

Very cool news. As far as the trademark/copyright concerns go. I would not be surprised if there is some kind of agreement behind the scenes between TSR and Wizards of the Coast. Some of the people behind the new TSR still have a good relationship with the people at Wizards of the Coast. And I am pretty confident that Wizards probably has no interest in ever doing something with the Star Frontiers franchise.

Farenn said:
Very cool news. As far as the trademark/copyright concerns go. I would not be surprised if there is some kind of agreement behind the scenes between TSR and Wizards of the Coast. Some of the people behind the new TSR still have a good relationship with the people at Wizards of the Coast. And I am pretty confident that Wizards probably has no interest in ever doing something with the Star Frontiers franchise.
Click to expand...

Not entirely true. WotC has had a skunkworks version of Star Frontiers for a while now.

Whizbang Dustyboots said:
If they can't use any of the existing Star Frontiers IP, what will make it "Star Frontiers?"
Click to expand...


Sasquatch Games released a new Alternity RPG that is not an update of the original one, so I guess this company could try to put out a new game using the name Star Frontiers and it not be anything like the original either.

Or maybe this and TSR is their way of expanding w/o doing it through WotC.

You don’t acquire companies who steal your IP; you sue them. That’s what will happen here if there is not some undisclosed licensing deal.

Farenn said:
Very cool news. As far as the trademark/copyright concerns go. I would not be surprised if there is some kind of agreement behind the scenes between TSR and Wizards of the Coast. Some of the people behind the new TSR still have a good relationship with the people at Wizards of the Coast. And I am pretty confident that Wizards probably has no interest in ever doing something with the Star Frontiers franchise.
Click to expand...

Better inform whomever is doing TSR's social media who pretty much said they're going to fight Hasbro over the rights by saying that it's up to the lawyers now.

Publisher
Judging by how efficiently the folks behind the new TSR have run their business(s) in the past, and especially by the flippant comment by them about lawyers, and it seems obvious that they did not get a licensing or pre agreement with WoTC, and are headed straight toward disaster.

James Ward is the only one on that team with any real experience managing projects or helping run a business, and he's in very poor health. (He has had health issues for a long time and always kept fighting through it and creating good stuff, but we can't deny those issues are getting much worse, and it's not fair to him to be ensuring everyone else is doing the right thing.)

Which sucks, because I'd love for them to see success. But good lord, you can't be doing stuff like this and expect to run a successful business. Unless they had permission to use that image, which is owned by Hasbro now, that's a huge rookie mistake.

Maybe I missed, it but I am wondering what system it will use? Will it be another 5th edition adaption, the original d100, or something new?

I never played Star Frontiers but I do remember seeing this ad for it in various comic books circa 1983. 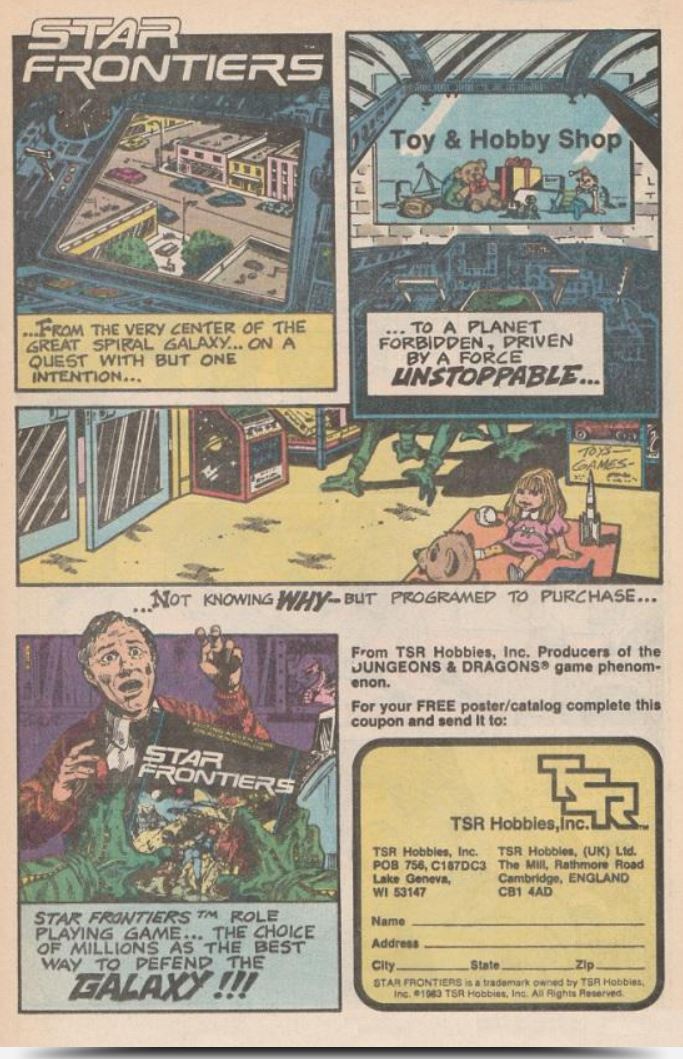 Sacrosanct said:
James Ward is the only one on that team with any real experience managing projects or helping run a business, and he's in very poor health.
Click to expand...

I'm not even certain Ward's involved beyond using his ruleset, as the wording's a bit fuzzy there. All I know is that this is Ernie Gygax's gig, and he still hasn't delivered on a KS yet, after 5 or so years.
Last edited: Jun 23, 2021