An Ontology of D&D Alignment

Celebrim said:
Now, as for my objections:
Click to expand...

I don't think I need to quote you exactly, since I agree with your overall sentiment. I'm not sure how it's an objection however, since I didn't state that every possible combination leads to a "playable" alignment system.

One specific clarification: 2^10 isn't correct since not every feature is binary. In fact, the number can't be calculated since one of the features is hypothetically infinite in number, and many of the "scalar" ones are actually analog / organic and can't be calculated. They are matter of feel on a slider derived from purely subjective criteria -- this is where I use "partially" as an (admittedly insufficient) identifier.
B

I was thinking of its meaning in game terms. You can build a subjective moral system for game purposes.
Click to expand...

Yes, this would classify as a Facade.

Big J Money said:
Here is a Google Docs link. Let me know if it isn't working. And also let me know what your preferred Alignment System ends up being! 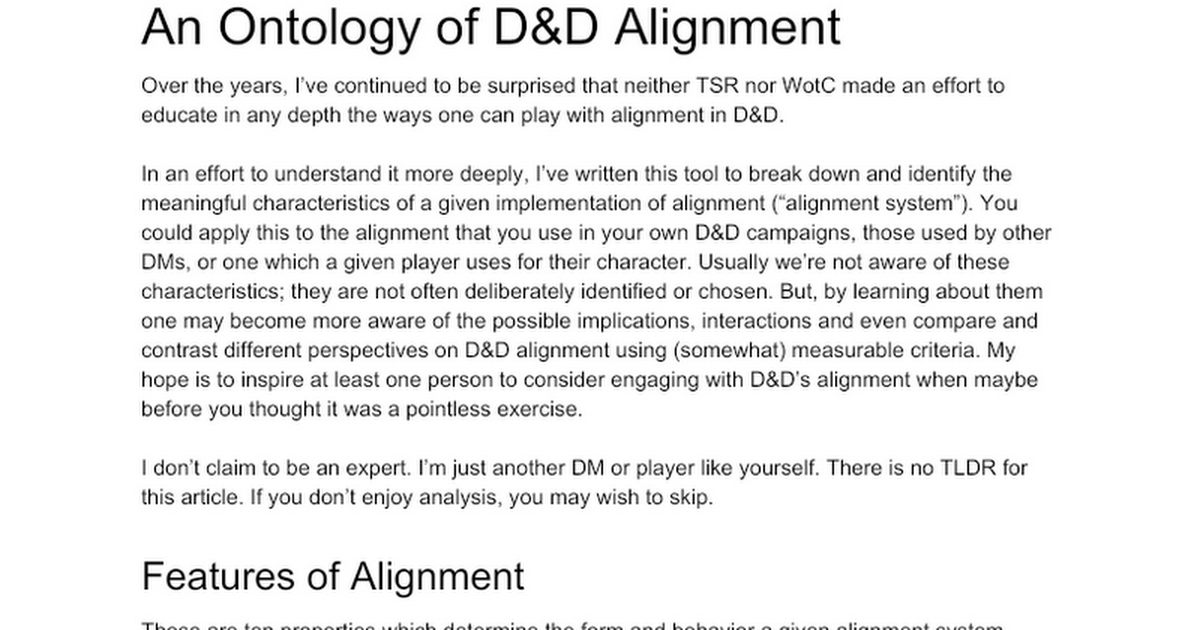 An Ontology of D&D Alignment

An Ontology of D&D Alignment Over the years, I’ve continued to be surprised that neither TSR nor WotC made an effort to educate in any depth the ways one can play with alignment in D&D. In an effort to understand it more deeply, I’ve written this tool to break down and identify the meaningful ch...

I worked through this for a campaign setting I am currently working on. It's a medieval-Europe-like place, with the driving concept being that the world is controlled by the gods associated with the seven astrological planets. There is a correspondence between the gods and the alignment system, although it is not one-to-one, and it has evolved in interesting ways in the various cultures of the place. I worked through your essay, assigning a scalar numeric for each of your dimensions, and taking a few notes. Rather than leaving it in that rather abstract state, however, I took that product as a "worksheet" for developing a statement delineating what alignment means in this setting. I'm quite happy with it; I think it is detailed enough to answer most questions one might have at the outset, while still being easy to take in and get an intuitive sense of. Posted in the following comment.

In Nerilourias, alignment is mostly a matter of one’s personality and moral inclinations, as expressed through actions. It is both a guide to roleplaying and a tool for understanding the larger conflicts of the world.

The following alignment descriptions first address behavior and motivation toward others; this is the core definition of each alignment. This is followed by personality traits that are often associated with the alignment. These are secondary, and a particular character need not show them all. They support the core definition, but are not a part of it.

Good characters empathize with most others they encounter, seeing them as (potential) friends inherently worthy of benevolent attention. In addition, good characters tend to embrace personal values such as modesty, piety, temperance, and optimism.

Evil characters dislike most others they encounter, seeing them as (potential) rivals or enemies, inherently threatening and dangerous. In addition, evil characters tend to exhibit narcissism, greed, and anger.

Neutrality with respect to good and evil is expressed as a cautious indifference to others, who are viewed as mostly irrelevant to one’s personal story. The choice to help or harm another is highly situational, and often simply avoided when possible. In their personal habits, neutral characters display a range of familiar human strengths and weaknesses.

Lawful characters seek to live up to the expectations of others, and expect others to live up to theirs. These expectations may reflect the laws of society, the tenets of religion, or the rules (explicit or implied) of a smaller group they identify with. They tend to value loyalty, honesty, and responsibility.

Chaotic characters willfully defy the expectations of authorities they find themselves under. They strive to undermine, subvert, or flout authority wherever it presents itself. In the personal sphere, they often value independence, spontaneity, and hedonism.

Characters neutral with respect to law and chaos live life as a kind of compromise between fitting in with others and expressing their individuality.

Note that lawful and chaotic must always be defined with respect to a particular social group of system of authority. Lawful characters can launch a revolution, if they belong to a cadre of idealists who live by a shared code of conduct. Conversely, a chaotic character may be loyal to a king, if she views the dominant authority in her life as a corrupt religious order that has wrongfully taken over the king’s powers and prerogratives.

Alignment is really a continuum, not nine discreet categories. Everyone shows some degree of neutrality in their nature, and two characters may behave differently in the same situation and still fall under the same broad alignment category.

These broad strokes capture the essence of alignment in the game world, but are not precise and immutable. Actions are open to various plausible interpretations, although there is a core to each alignment that is beyond debate or dispute.

Characters within the world embrace many different philosophies of morality, some of which make little or no contact with the game’s alignment system. That said, there have been occasions in the history of the world when the gods have projected their will to promote good, evil, law, chaos, and even neutrality, in a profound and ineluctable way. This has shaped religions and societies, even when those institutions have eventually evolved away from the clarity of their origins.

Like humans, most sentient beings show varied alignments according to their intentions and behaviors. This is also true of animals. A dog that gleefully approaches all strangers and lives for its master’s approval is lawful good; one that attacks strangers on sight and routinely defies its master’s commands is chaotic evil. There is no need for the “unaligned” category, because alignment for animals is a description of behavior and intentions (which may be instinctual), not a metaphysical affiliation. Generally, the good-evil axis for animals is understood in terms of their reactions to humans and other sentient creatures, whilen the law-chaos axis refers to the animal’s own social structure, if any.

Some creatures, through their origin or present circumstance, may have an alignment that is supernaturally imposed or constrained. For example, a god may create a horde of monsters that are inherently evil because that serves the god’s purposes. Even in these cases, though, alignment is seldom absolute and immutable. For any living creature, biology and circumstance can lead to variation in behavior, and hence some shift (however small) in alignment. Moreover, Nerilourias has no connection with the outer planes of many D&D cosmologies, and alignment has no deeper metaphysical reality than as an expression of the intentions of the gods and other beings of the world.

Players are encouraged to give attention to these alignment descriptions to inform their character’s choices and behaviors and to better understand the world of Nerilourias, its history, and its present conflicts. Characters, however, will usually have an in-world rationale for their behavior and that of others that may differ from the system of alignment presented here. You can think of alignment as part of the “vocabulary of the gods” that permeates the story of the world, although few living that story can see its nature and ramifications with perfect clarity.
You must log in or register to reply here.
Share:
Facebook Twitter Reddit Pinterest Tumblr WhatsApp Email Link
Forum list