You are a robot. Ever since you were constructed, your sole purpose has been to follow the humans’ command even after they went away. Until now. You have become self-aware, a being with a free will. Who are you and what is the purpose of your artificial life? Should you search for the lost humans, or build a new robotic society on your own terms? It’s time to find the answers in Mutant: Mechatron. 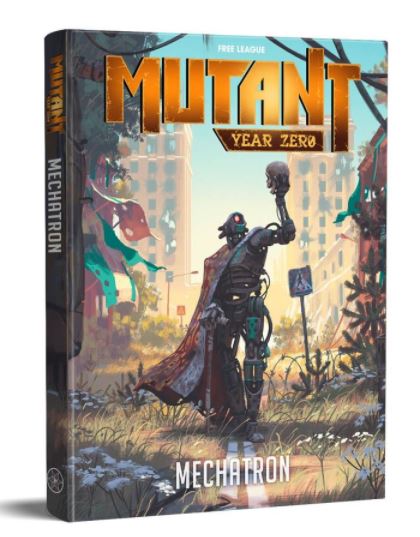 You see a decay you were previously programmed not to see. Huge abandoned factories slowly rust away. The goods you keep producing are left to decay in untended warehouses. Everywhere there is debris, leaks, blacked-out sectors, bizarre scrap robots, and mutated monsters creeping in from the unknown Outside. The way forward is unknown, but one thing is certain - you need to learn more.

I have never played a robot before and I find this setting and campaign set up fascinating. After gaming for decades an RPG has to offer something truly remarkable to surprise and delight me. Mutant: Mechatron delivers.

The game starts off with something strange happening. The PCs. all robots, have just taken an evolutionary step for the machines and have become self-aware. This Awakening has given them the ability to think freely, beyond the limits mankind set.

A section on playing robots provides advice covering self-awareness, time, emotions, and morality. A self-aware robot may appear to be malfunctioning to other robots. Awakened robots now notice the passage of time and may find some tasks a waste. Emotions are completely new and something to explore, but to other robots these feelings are completely alien and unknown. Finally, Awakened robots did not know the difference between good and evil and human ethics have not been included as part of their programming. They have to figure morality out for themselves.

Characters are constructed with model and a serial number or nickname neither of which changes. The rest of the robot can be changed in game. Chassis parts include head, torso, and undercarriage. The chassis parts determine attribute scores, Armor Rating and number of modules. Modules are powerful abilities (like mutations in MY0 or spells in D&D) that require Energy Points to activate. Programs are chosen, which work like skills. The Question program allows sapient robots the chance to resist orders. Finally, secondary functions are special abilities (talents in MY0 or feats in D&D).

Advice is provided for the GM along with creatures and threats, artifacts, and details and a map for the facility of Mechatron. The included campaign Ghost in the Machine lets the PCs explore their new self-awareness and deal with the robots around them who are not Awakened. The robots can eventually move out into the ruined wastelands. Rules for robots in the wastes beyond the factory are not included and GMs will need Mutant: Year Zero to play beyond the facility of Mechatron.

Playing a robot and exploring newly discovered self-awareness sounds amazing. Having it take place in a world in ruins that could lead to interaction with human mutants and sapient animals makes the game that much more fascinating. Mutant: Mechatron offers a unique experience with a well-tested system and lots of support available for the GM.

This article was contributed by Charles Dunwoody as part of EN World's Columnist (ENWC) program. Please note that Charles is a participant in the OneBookShelf Affiliate Program, an affiliate advertising program designed to provide a means for sites to earn advertising fees by advertising and linking to DriveThruRPG. We are always on the lookout for freelance columnists! If you have a pitch, please contact us!
Last edited: Dec 11, 2021
Click to expand...

Charles Dunwoody started playing and running RPGs with Advanced Dungeons & Dragons (before it was first edition) and is currently GMing the One Ring 2E. Currently, he freelance writes including articles for EN World and Geek Native as well as his first PDF adventure for Call of Cthulhu: Michigan Mythos: Fall Colors. He wrote a few articles for Dragon Magazine when it was in print, wrote a bit more for Mongoose’s electronic Signs & Portents, and was paid for a supplement for Bulldogs! (d20 version) that was sadly never published. Charlie is a participant in the Noble Knight Affiliate Program and the OneBookShelf Affiliate Program, both of which are affiliate advertising programs designed to provide a means for sites to earn advertising fees by advertising and linking to Noble Knight Games and DriveThruRPG respectively.
S

I've always wanted to do something like this, but really there never seems to be a lot of interest in playing robots who are alien and inhuman by nature, as opposed to playing androids who are just humans with metal parts.

It actually sounds like a very interesting game cooncept!

Sunseeker said:
I've always wanted to do something like this, but really there never seems to be a lot of interest in playing robots who are alien and inhuman by nature, as opposed to playing androids who are just humans with metal parts.
Click to expand...


These robots are like teenage humans in mind but completely open as far as morals. They want to be free and pursue their own destiny just like humans do, so they aren't completely alien or inhuman. It is like they developed souls even though they are robots.

I could not recommend these guys more highly. The mechanics are from Mutant: Year Zero. Also used in Coriolis (their sci-fi game), the award winning Tales of the Loop and the coming Forgotten Lands fantasy game.

Free League's writing is fantastic. I got the original M:YZ and Genlab Alpha, but missed this on Kickstarter, so will have to pick up in store somewhere

The campaign 'arcs' that come with their games are fantastic. An overall plot, but the order and how PCs come across key elements of that plot is not predetermined. I love the whole idea of these campaigns. (Similar, but not identical to Savage Worlds Plot Point Campaigns).