Be the Apocalypse; Channel the Delta Green Handler’s Guide

You are a Handler, a GM, for agents, PCs, fighting to keep otherwordly terrors from destroying the world. But the world is doomed. It isn’t about victory, which is impossible, but about the fight, which is all that mankind has left in the Delta Green Handler's Guide. 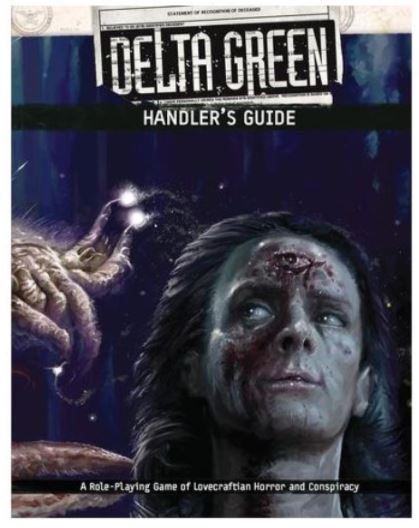 The Delta Green Handler’s Guide is a full color 370 page hardcover published by Arc Dream Publishing via kickstarter in 2015 and written by Dennis Detwiller, Adam Scott Glancy, Kenneth Hite, Shane Ivey, and Greg Stolze. Available in hardcover with free PDF or PDF only. Also comes packaged with the Agent’s Handbook in a slipcase or both as PDF only.

The rulebook is packed with in world artifacts alongside rules to run the game and a starting scenario. The introduction starts with a blood-soaked agent soaking his feet in an alien sea on the world on which he is marooned. The Delta Green Handler’s Guide is divided into four main sections consisting of the past, the unnatural, the schism, and the opera bracketed by an introduction and appendices.

The past describes the origin of Delta Green in the 1920s raid by the FBI on the town of Innsmouth and continues year by year into the present. A Handler can set a campaign on any date in this timeline and have needed information to get started.

The unnatural covers tomes and rituals, unnatural entities, and the Great Old Ones. The chapter is filled with secrets that no one agent of Delta Green can completely uncover. A short history of the unnatural covers major events. Magic is studied by Delta Green as hypergeometry due to its association with numbers, math, position, and shapes. A variety of alien intelligences are statted out from deep ones to winged servitors. The Great Old Ones are described in terms of power and dismissal as they are not creatures that can be faced in simple combat.

The Schism discusses the two groups called Delta Green, one sanctioned by the government and the other on the outside working completely without US backup or oversight. At the highest level both groups know of each other but the agents in the field likely never learn that there are in fact two Delta Green organizations at work.

The opera is what Delta Green agents call a mission, a night at the opera. The Handler is provided with details on how to make operations run from keeping humans the main threat to the concept that there are worse things than death. GMs creating a campaign pick a decade and customize the situation which leads to six pages of creating operations detailed in seven steps. The appendices include a sample scenario putting these guidelines into practice. Recommended media for the Handler covers Mythos fiction and RPG resources more than non-fiction sources.

The Agent’s Handbook grounds the PCs in reality and the repercussions of violence and secrets kept for a nation. The Handler’s Guide takes all that stress and danger and violence and ratchets up the stakes and tension to a level that most Agents cannot endure. The fight no longer becomes about winning but about striking a blow against the madness and keeping going until you are in the ground or the pysch ward or worse. Armed with this guide, a Handler can challenge Agents with a world where there are worse things than madmen, murder, and hatred of man for fellow man. There are alien intelligences that will destroy everything humans are building no matter what Delta Green does. But Agents fight anyway, striving to push the end back for one more day.

This article was contributed by Charles Dunwoody as part of EN World's Columnist (ENWC) program. Please note that Charles is a participant in the OneBookShelf Affiliate Program, an affiliate advertising program designed to provide a means for sites to earn advertising fees by advertising and linking to DriveThruRPG. We are always on the lookout for freelance columnists! If you have a pitch, please contact us!
Last edited: Aug 27, 2021
Click to expand...