Do you like your sword-wielding sociopaths to be princes who are doomed to die? It is a popular theme in literature and in role-playing games, as is the eternal chaoskampf between the forces of Law and those of Chaos. The works of Michael Moorcock and his eternal champions are the oft-cited ur-artifacts of these idioms, though one does not have to dig far to find others. But what Kobayashi and Les Livre De L’ours has done is taken the highly regarded Black Hack, and added a big black sword to it. These are my first impressions of Black Sword Hack. 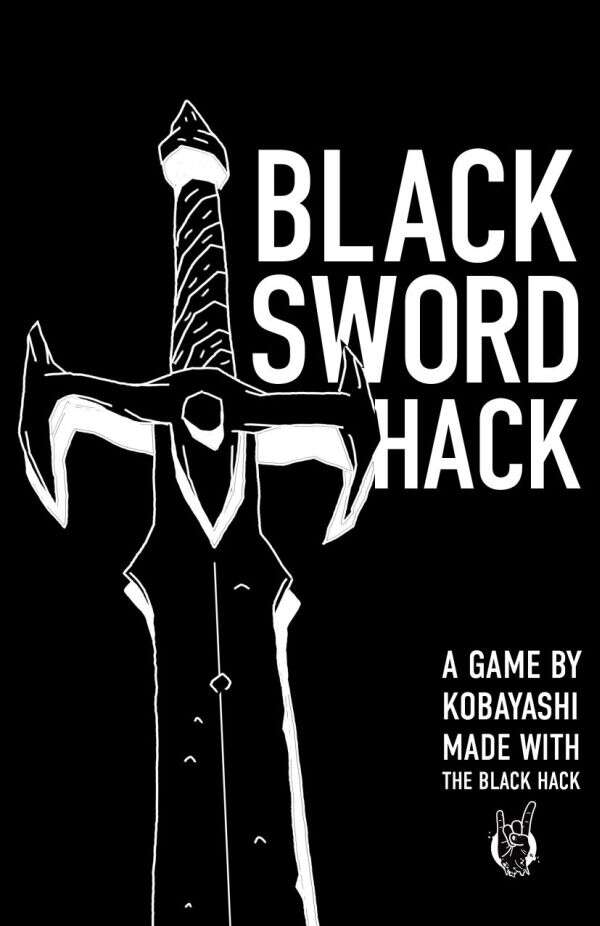 One of my primary beefs with anything that is OSR or OSR adjacent is that it almost exclusively deals with rehashes or recapitulations of Dungeons & Dragons(™). I do not just mean layering a world around it, I mean actually or spiritually invoking everyone’s often poorly remembered favorite version of the game. When in fact, there are many games that are in their fourth decade of existence and can be rightly considered “old school”. One of those that is closing in on that age is Stormbringer, which was the original attempt to bring the eternal champion officially into gaming. Black Sword Hack uses the Black Hack as a foundation to call forth that ancient god/game of chaos and make that doomed aesthetic available, without the attached IP.

The aesthetics of the game are about what you expect and, if you are a fan of this style of design, probably exactly what you want. There is no bs here, no fancy backgrounds that make it impossible to tell page numbers. The table of contents is clean and simple. The layout is no frills, basic, and very clean. You can scroll down the pages and not have to dive around looking for answers; all the topics have big headers and are easy to see. The artwork reminds me of an 80s black and white indie comic. It is used for chapter headers and little else, and several of these pieces have a rock’n’roll vibe that I like.

The game runs on using a D20 and rolling low, instead of high. There are a number of 5E mechanics at play here, notably Advantage / Disadvantage. However, there are noted differences: Disadvantage does not automatically mean use the worst roll, but instead means the GM can choose. Now in a game about doom, why would the GM choose the best roll? Well hard to say but the option is there. Speaking of doom, there is a Doom.. sorry DOOM roll in the game and I like it. There are specific circumstances when you make a Doom roll and Doom is a kind of resource the player can use. Like other resources, Doom has a usage die (D6) and when it degrades completely, the character is doomed. This means the character is disadvantaged until they reset doom with a long rest.

In addition to spells and dark pacts (because demons), there is a chapter on rune weapons. Included are random charts to determine what kind of rune weapon is in play. I rolled on the random name generator and got: Long Sword of Hunter Crow. Other charts fill out the power of the sword, what it is made of, and where it can be found. There is a chapter on science gadgets as well and this is a welcome inclusion. A GM can pit the forces of science against those of magic and each side can come well armed to the fight. For those who always look for such things, there is a short appendix on ships and combat on the waves.

My first impressions of Black Sword Hack are good ones. Strip away all the lore, nostalgia, and connection to any larger context and what you have is a fun, tight fantasy rpg with a lot of flavor built in.
Click to expand...

SM Hillman is a freelance RPG writer and contributor to EN World. You can check out his Zer0 Means You're Dead podcast and his Zer0MYD Patreon where he has some cool stuff. Follow SM on Twitter @smh_worlds.
S

Respectfully, while the OSR has plenty of retroclones its primary reason to come into being was to support those earlier editions of the game with adventures and expansion material and much of the OSR's success is keeping these games supported as opposed to say Stormbringer/Elric which I don't think is currently being supported in print. Additionally, the DIY nature of the OSR has led to support for games like Traveller & 007.

How is it on the Demons and Lords of Chaos front? Completely vague or does it come up with its own Courts and demon hierarchy?

How is it even possible to know such a thing? Everyone's ???