Check Out The One Ring 2E’s Cover Art!

Click here to view article text
Cubicle 7 has just revealed the cover art (by Johan Grenier) of the new version of The One Ring roleplaying game. 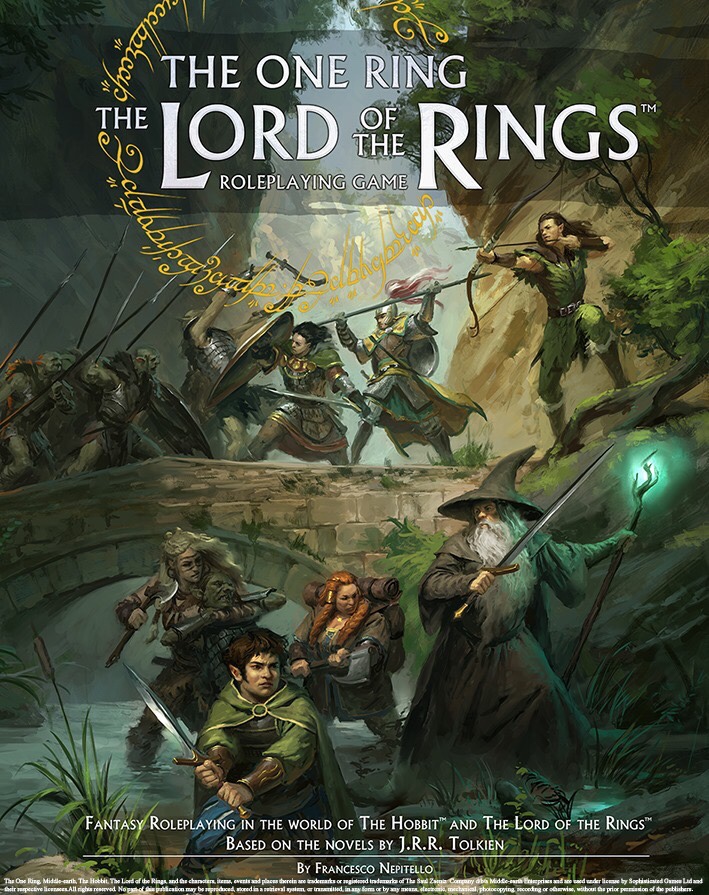 I suppose today, more people have seen the movies than read the books.
Click to expand...

Yes, I assume. I do love the movies, except for the Hobbit trilogy....yuck. The original cover just feels more evocative, as was mentioned earlier.

The original art by Jon Hodgson is some of the most gorgeous fantasy art around. This is pretty clean, and I generally like it, but I wouldn’t trade my original hardbacks for that.

I definitely like the cover more than the interior art for the cultures.

Looking at the interior art, it appears they're drawing a lot of inspiration by the art and costume design from the movies...especially with the elves. I think the problem is...everything is using that as their template these days, which means that rather than having a unique, Tolkien-ian feel, it just looks like the kind of art one would see in a 5e manual. About the only difference is the color palette is slightly more muted than one would get in a 5e book.
H

In their Erebor supplement C7 gave us a female dwarf iconic PC with a beard (which is proper Tolkien); I wonder why they dropped the bearded female dwarf.

Wightbred said:
I definitely like the cover more than the interior art for the cultures.

Well, I never thought I'd say this, but after viewing the elf's armor my thought was, "yes! No boobs!"

Sorry Wight, but you get -1 for your post. That interior art is excellent.

Tyler Do'Urden said:
Gandalf was in Middle Earth for about 2,000 years... we can assume that he was part of a lot of different adventuring parties during that time.
Click to expand...

Yep. My thirst thought looking at the cover. I used him here and there in my old MERP games in the middle third age.

The art looks pretty good to me. My only complaint is that the title font makes it seem like the name of the book is "The Lord of the Rings"; with "The One Ring" being like a series title. The nature of the product would have been far more clear if "The One Ring" had been in a much larger font, and "The Lord of the Rings Roleplaying Game" had been in a smaller font below that.

Angus McBride was the MERP cover artist....while looking him up, he passes away in 2007 but what a great legacy of fantasy art he gave us to enjoy.

DMMike said:
Well, I never thought I'd say this, but after viewing the elf's armor my thought was, "yes! No boobs!"

The quality of the interior art is great, but the posing of each on a little stage ruins it for me.


EthanSental said:
Angus McBride was the MERP cover artist....while looking him up, he passes away in 2007 but what a great legacy of fantasy art he gave us to enjoy.
Click to expand...

McBride’s art is inspirational, but I feel that some of his other LotR art would have been a better cover.

I really love the cover, it's doing the job of showing a party of adventurers with the various TOR classes/cultures (note there is a Beorning stood with the dwarf and hobbit) alongside a patron - Gandalf. The awesome Jon Hodgson did this idea across nearly all of his covers for the 1st Edition. You can see the same characters grouped up, with a few exceptions I think. Jon isn't with C7 anymore, having formed his own company this year (https://handiwork.games/) and it was Jon's visual style that heavily influenced the look that we all loved about TOR 1st Edition. I can understand why C7 wanted to move away from this and they are definitely taking a step closer to the AiME style of covers. It'll be interesting to see how they do the interior art as well, decorative borders of pages etc, because that too was Jon's visual expression.

Dwarf women - I think a lot of people are tongue-in-cheek joking (and being misunderstood), but yeah there are dwarf women and we know very little about them. This site is always good for info on all things Tolkien - http://tolkiengateway.net/wiki/Dwarf-women

So what are we going to see inside? Right now there isn't a lot of info unless they have been saying it quietly at cons. I was at the UK Games Expo and there wasn't anything more revealed than what is in the linked article below.

The One Ring – The Lord of the Rings™ Roleplaying Game:
The 352 page core rules featuring stunning new art, maps, rules for character creation, and everything you will need to adventure in the lands of Middle-earth.​
Click to expand...

I am really excited for the range of products that will be accompanying the new edition, it sounds well thought-out, but don't expect it all at once. C7 take their time with their products.

This info comes from a recent announcement by Cubicle 7 which can be found here - https://www.cubicle7games.com/cubicle-7-announces-the-one-ring-second-edition/

This is such a great time to be a Tolkien fan and also a gamer. I've been slowly (real slowly) working on a blog that looks at, amongst other things, the Lord of the Rings Online, the MMORPG by Standing Stone Games (originally Turbine/Codemasters). I recently posted a list of all the current games that are still in production (so can be easily bought without it becoming a treasure hunt) and are based on the book license - so no Games Workshop or things like LOTR Risk, which use film images in their artwork (GW have done a Scouring of the Shire product recently, so also use the book license too). The license for both does come from the same place - Middle-earth Enterprises - but I prefer gaming based on the book canon.

And I am sure we'll learn more soon with Gen Con round the corner...

I think the artwork is great, and I've purchased two of the 5e source books. Not sure that I would want to try a different system entirely though.

Zarithar said:
I think the artwork is great, and I've purchased two of the 5e source books. Not sure that I would want to try a different system entirely though.
Click to expand...

If you are picking up the 5e versions (AiME), unless you really wanted the TOR system too, you would be duplicating products - AiME follows TOR in content, sometimes there is a little adaption, but nothing massive.

dregntael said:
So, someone has a link to what's new in this edition apart from the cover?
Click to expand...

it's not due out for a few months, so what exactly has been changed is still not revealed.

BronzeDragon said:
You haven't read Appendix A to the Lord of the Rings, have you?

There are dwarven women, but they are rare and stay underground.

I agree there shouldn't be a dwarven woman adventurer on the cover, since that would constitute a breach of canon to rival the ridiculous elven-dwarven romance in the Hobbit movies.
Click to expand...

This is a role playing game of adventurers in Middle-earth not reliving the footsteps of The Fellowship.

Hence, surely, a dwarf woman may join a group of adventurers to explore the surface world and maybe even retrieve a magic artifact to help her people back home. ;-)
J

Spent a fortune over the last few years on TOR. How much rule tweaking will there be. Really like the game but it better be amazing to persuade me. Artwork feels to busy, some be more sombre and subdued

John R Davis said:
Spent a fortune over the last few years on TOR. How much rule tweaking will there be. Really like the game but it better be amazing to persuade me. Artwork feels to busy, some be more sombre and subdued
Click to expand...

Yeah. Plus the timeline has moved on a lot and new areas being developed so all new good stuff
H

Hurin88 said:
I don't have my LotR books with me, but can anyone remind me what chapter it was when Gimli got his reassignment surgery?
Click to expand...

Ah, I finally figured it out. It must have been in 'A Short Cut to Mushrooms'.
E

John R Davis said:
Yeah. Plus the timeline has moved on a lot and new areas being developed so all new good stuff
Click to expand...

Well, not really. C7's plan all along was to cover the 60+ years that pass in between the end of The Hobbit and the beginning of LotR. This one is starting about 20 years after where the original core rules started, similar to their original plans of three separate sets of slipcased core rule books, each covering about 20 years of game time.
You must log in or register to reply here.
Share:
Facebook Twitter Reddit Pinterest Tumblr WhatsApp Email Link
Forum list