D&D General Choose 3 to protect you 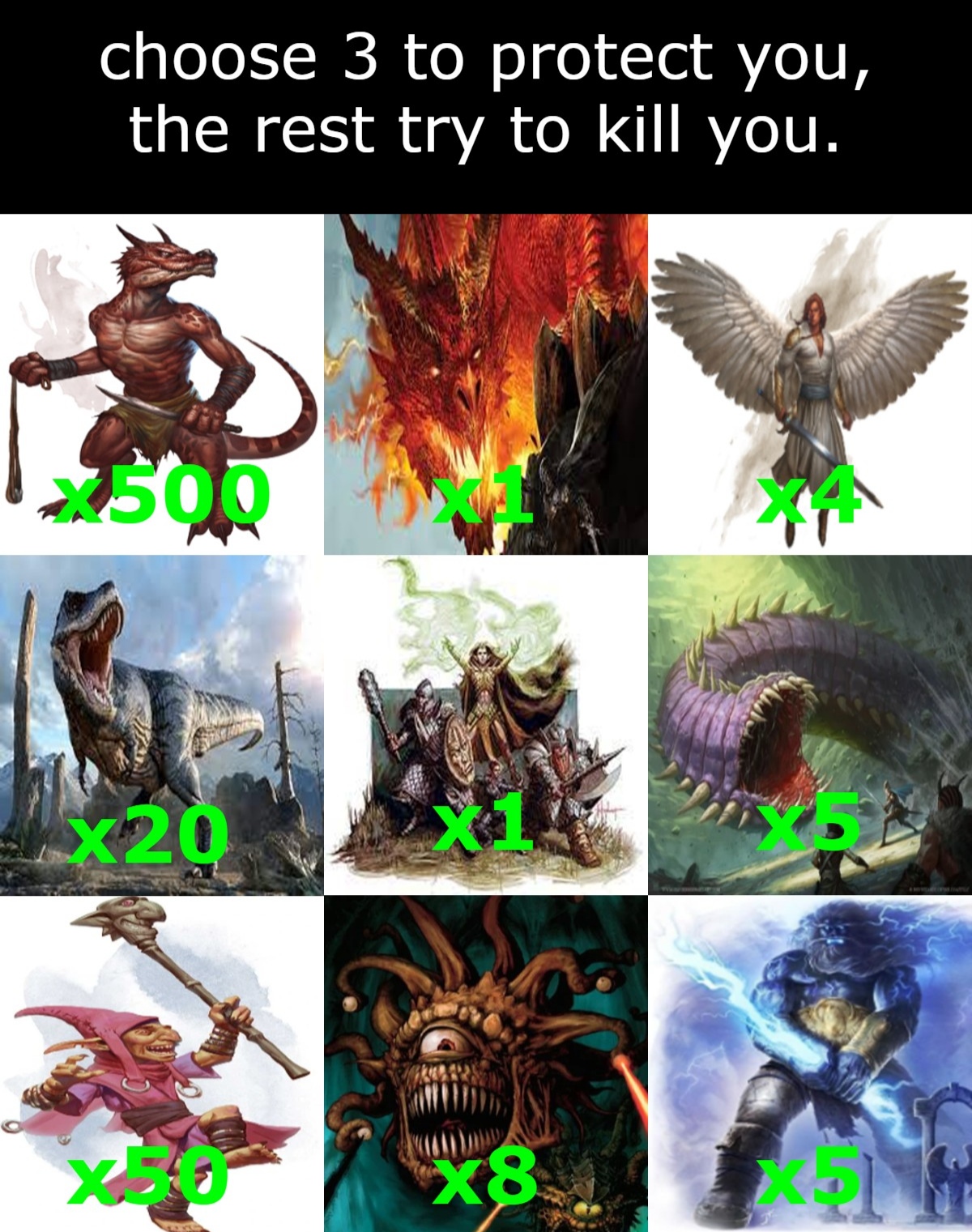 For the sake of you not getting killed instantly, you can assume yourself to be a commoner with 500 hp. You can answer both in terms of game mechanics or based on lore.

What would you choose?

The level 20 party, the solars and the nilbogs.

My reasons are my own.

A level 20 party, with their Red Greatwyrm patron and its 500 Kobold work force.

The heroes have got the adventage of plot armor.

RoughCoronet0 said:
A level 20 party, with their Red Greatwyrm patron and its 500 Kobold work force.
Click to expand...

See, I pick the level 20 party, the Solars and then the Red Greatwym BECAUSE it will just acquire the kobolds due being an evil dragon.

Sure, but the dragon brings the 500 kobolds with him and with 4 solars that's 12 resurrections to use on the dragon, so I get 13 red great wyrms. More if there's a cleric among the party.

Only 3.5 of these options even fly. Beholders, dragon, solars, and kill the rest from out of range.

I am setting this up as a poll since I think tracking responses would be easier that way:

Based on @merkili's thread here: D&D General - Choose 3 to protect you The options are, left to right top to bottom: 500 kobolds, 1 red greatwyrm, 4 Solars, 20 tyrannosaurus rex, a level 20 party, 5 purple worms, 50 nilbogs, 8 beholders, 5 storm giants. For the sake of you not getting killed...

I agree that action economy is the most valuable thing here, but 20th level PCs could shut down your whole army with Wish. Accordingly, I think they’re a must-have. The 500 kobolds are easily the next pick due to action economy. For the third pick, I might actually go for the 8 beholders to prevent the dragon, solars, and storm giants from using their magical abilities against you (and to prevent the beholds themselves from turning off your PCs’ magic). But a strong argument could be made for picking the niblogs over the beholders.

To protect me the Great Wyrm, 4 Solars, and Level 20 party.

J-H said:
Only 3.5 of these options even fly. Beholders, dragon, solars, and kill the rest from out of range.
Click to expand...

4 adventurers to plane shift us to Celestia. 4 solars to vouch for us and get sanctuary in Celestia. 5 storm giants who probably won't catch flak for being in Celestia.

All the others are either KOS in Celestia, or can't get there on their own.

The 20th level party, the 8 beholders, and the 500 kobolds. Raw power, insta-kill effects, and the power of math combined.

The goal is to protect me, isn't it? Not fight to the death in a silly arena set-up, then.

The level 20 party [henceforth known as the G-men] (composed, supposedly, of at least a cleric and a wizard) can Teleport without Error or Wish me away in a safe place (or my corpse should I die before they get initiative, and raise me later -- indeed I am willing to return to life instead of being stuck to some moronic wall], out of immediate touch of the rest of the threats that are pitiful at alpha-striking, save perhaps the great wyrm and the solars, which I recruit to complete the G-team. The first move is to retreat to some safe place chosen to be particularly ellusive and hard to find, henceforth designated as the seat of my power, the G-spot, while I try to find use of my newfound army, especially the casters, to inquire about the local lore, hire a 5-yo to proofread my plans and become lord of this universe.

As many have mentionned, the kobold might be willing to work for free to build me a decent castle, but undead versions of them would be superior in terms of logistics, especially at first, and they are very vulnerable to scry-and-die.

[Edit: Of course, since it's in D&D general, I choose my level 20 party to be from the 3.5 era, back when the casters were decent in powers, unlike now, where martials overshadow caster's sandals far too often to my liking].

Kobolds constantly appease the nilbogs with gifts and small traps and stuff. The party adopts all the adorable kobolds and nilbogs as mascots.

Nothing gets NEAR me without getting through the Party Mascot (of which there are 550) and you know D&D players. Every one of those Kobolds and Nilbogs would have 10-12 class levels by the end of the week. And be geared to the gills with magic armor and items to keep them safe.