Publisher
They say life is full of coincidences. Today is no exception. Today I received the final approved proof copies of all of the books that are going to be part of the Chromatic Dungeons Kickstarter that is launching next week (see the pre-launch page here). Why is this such a coincidence?

Because recently Ernie Gygax announced how they have restarted a new TSR company with the goal of creating products of that era where they could exclude modern views on equality and diversity and inclusivity. I won't talk about that (this is not the place, please don't) other to mention how it relates to Chromatic Dungeons.

You see, the impetus behind Chromatic Dungeons was in response to how many of the more well known personalities in the OSR community were espousing toxic and exclusionary behaviors, and that's not how I want my favorite era of gaming to be. So the goal is to take the feel of old school gaming during the TSR era, and apply modern sensibilities of design to it, and to present it so it represents all gamers of our community. To be inclusive. And welcoming. And diverse. Nearly all of the freelancers hired belong to underrepresented groups themselves. Sensitivity readers were hired. An OSR game, with an old school feel of game play and aesthetic, but to show how the OSR can be inclusive as well, and to act as a counter product to those OSR games who reject or ignore much of the gaming community, or actively endorse problematic attitudes. I love the OSR, I love old school gaming, but I am not going to sit by and let it be overtaken by toxic elements. Not if I can help it. Because I do believe there is a place in modern gaming to also enjoy the classics. This is a good game outside of all that, which is the most important thing. But it's also more than that.

Chromatic Dungeons is the antithesis to what's been dominating the gaming news in the past week. And I am proud of that. So coincidence or not, fate seems to have aligned the timing of this product with what's been going on.

If you are interested in supporting this project, click the link above and follow it. Or head to the Chromatic Dungeons FB page for the most recent updates. 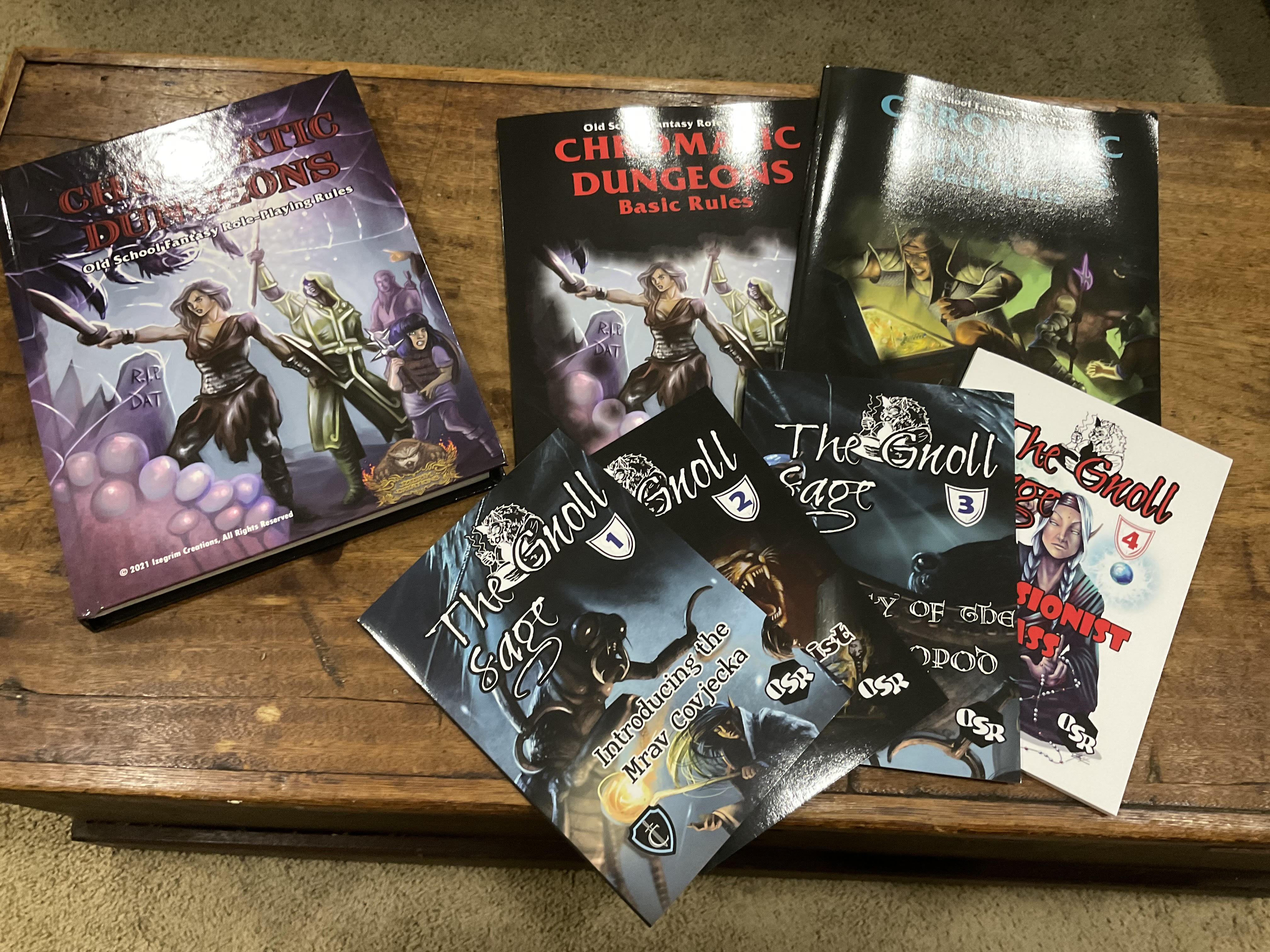 Supporter
It looks really good! A nice mix of old school and modernity, and I really like what you have said in the first post, so @Sacrosanct count me on for the Kickstarter!

This looks awesome.
I look back with fondness to teen years of gaming in the late 1970s and early 1980s, but not with the same fondness that I now have for values such as diversity and inclusion for all.
My immediate reaction to the sight of Giantlands, Elmore art and, yes, the name Gygax was totally positive. But then, thanks to this site, I learned a lot more......not touching with barge poles now.

This project, however, looks great. Old school feel but aware of what is morally right.
Count me in and good luck with the project.

Publisher
Thank you all for all of the kind words. They mean a lot. Also, feel free to ask any questions. And I mean any questions. Transparency is important to me, because as a consumer, I'd appreciate that from companies I support.

Money is a bit tight at the moment, but I'll see if I can make a pledge. Seems a worthwhile (and interesting) project.

Publisher
Looks like a great project. As an OSR-publisher trying to be as inclusive as possible it's great to see other folks doing it. What was your experience with the sensitivity readers? Did they catch stuff that you didn't even think of might be an issue?

Good call; I initially read right past the link!

yeah...sadly money's a little tight right now, we just bought our first house. I'll be sure to try to save some to send your way

thirdkingdom said:
Looks like a great project. As an OSR-publisher trying to be as inclusive as possible it's great to see other folks doing it. What was your experience with the sensitivity readers? Did they catch stuff that you didn't even think of might be an issue?
Click to expand...

It was a good experience. And yes, they totally caught things that seem obvious in hindsight, but I didn't catch. For example, in my sample play section, the DM was male, one player was male, one was they/them, and the other a female. The female was the only one who asked how a rule worked (totally random), but in hindsight, I can see how it completely reinforced "women don't know the rules and a man needs to explain it" trope. So I quickly changed that and swapped places with her and the DM, so the DM was a woman, and the questioning new player was male.

A trickier example was with a piece of art. Because the game's aesthetic was to capture that old sword and sorcery style, there are a few pieces that could be considered cheesecake. I'll attach both versions here. The artist has Mesoamerican heritage, so no cultural appropriation (which was important for me to avoid). And I wanted to avoid having the male in the typical rescue pose, while the woman was needing to be rescued, so I had those roles reversed. I thought I was good to go. Nope! The sensitivity reader, and other women they polled, all had an issue with underboob (which was only done to try to capture that 60s/70s S&S feel). I will say the artist, Billy Blue, was extremely receptive to the feedback and changed it right away.

The one big piece of advice I'd give re: sensitivity readers is this. They will pick out things that you might want to keep, or you really like. Swallow your pride. Listen to them. If you won't listen to them, why hire them in the first place? 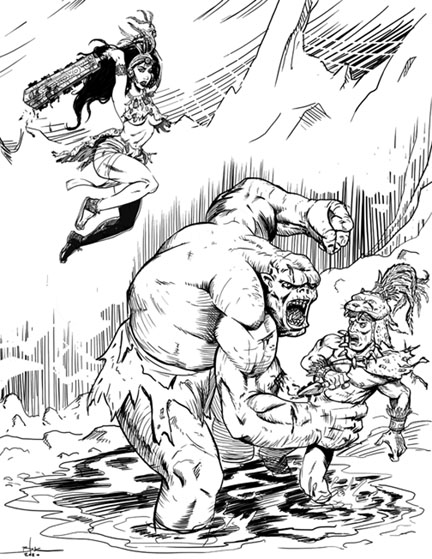 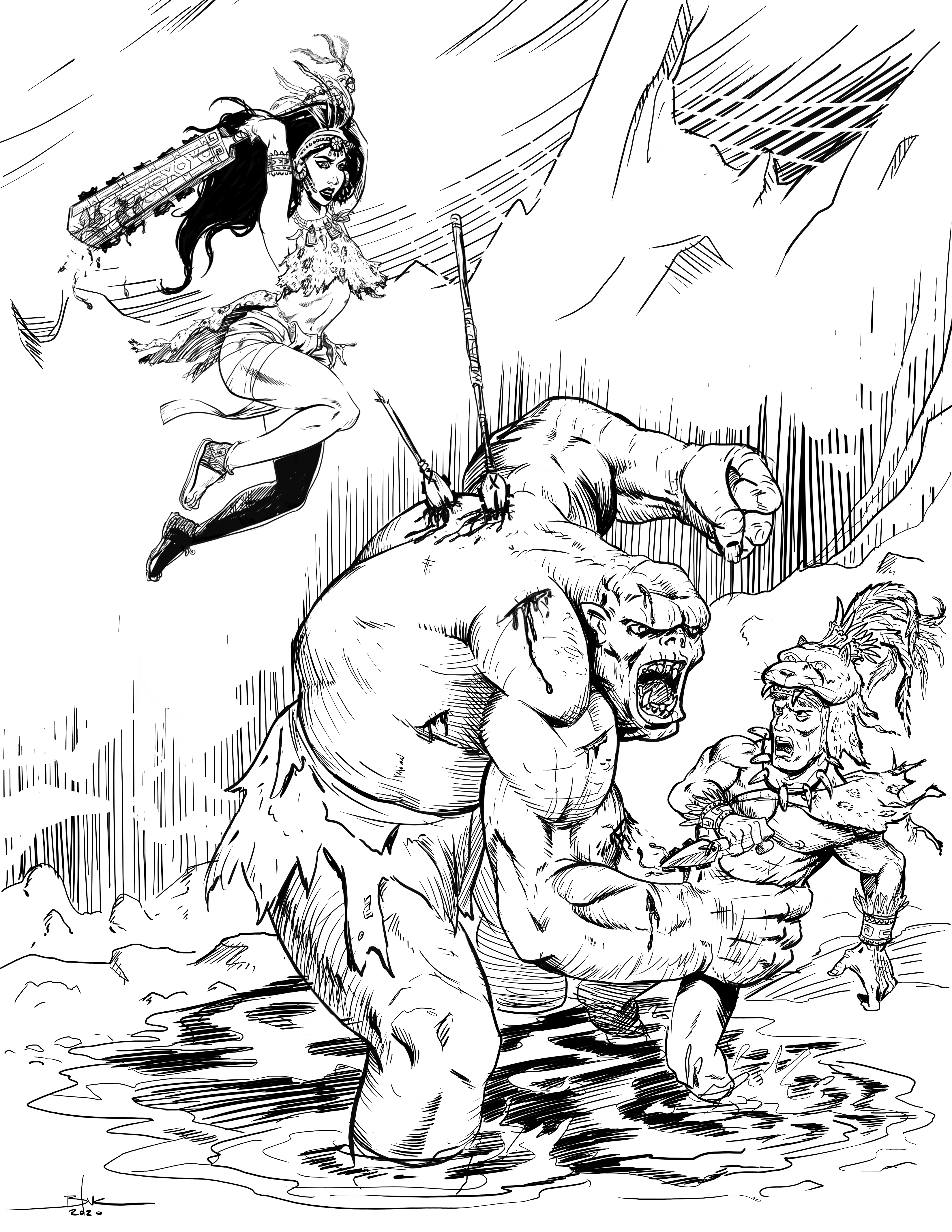 Publisher
Well, you've got me intrigued. Can you give me an idea of what kind of rules system you're using.

thirdkingdom said:
Well, you've got me intrigued. Can you give me an idea of what kind of rules system you're using.
Click to expand...

One of the goals was to be compatible with TSR era D&D (although I guess I now need to say TSRv1.0...) So the core rules structure emulates that pretty closely. There are different saving throws (a bit more simplified, but you'd easily recognize them if you played AD&D). Skills are essentially roll under ability checks. It's how we did it back in the day anyway, before there was a skill system in D&D. Want to make a stealth check? Anyone can attempt it. Roll under DEX (with potential modifiers based on factors that may be relevant). The only other real major change from AD&D is ascending AC. Again, easily convertable with those old modules, but the best way to go.

For example:
Class Features
Weapon Skill (1st level): The fighter is exceptionally trained with weapons, gaining a +1 bonus to damage. If using the optional speed factor rules, all weapons will have their speed factor reduced by 1 (min 1) when wielded by a fighter character.

Zero Level Opponents (2nd level): Whenever a fighter is fighting a 0 level creature, or a creature with 1 HD or less, the fighter has a number of attacks equal to their level against that creature or other “zero” level creatures within reach of their weapon throughout the fighter’s turn.

Weapon Specialization (3rd level): Upon reaching 3rd level, the fighter becomes so specialized in weapon use, that whenever you initially roll a natural 1 on the damage die, you can reroll damage, taking the new roll even if it’s a 1.

Defensive Stalwart (4th level): The fighter has learned to use their armor more effectively. Whenever wearing armor, they will receive a +1 bonus to their AC. This bonus is increased to +2 at 11th level.

Extra Attacks (5th level): At 5th level, whenever the fighter attacks with a weapon or natural attack, they may make one extra bonus attack on their turn. This attack can be split up between moving, but must be made during the same turn. At 10th level and at 15th level an additional attack is also gained.

Precision Attacks (6th level): The fighter’s attacks can overcome the resistance to non-magical weapons some creatures have. Additionally, any attempts by the target to resist a disarm or tripping attack from the fighter will suffer a -2 penalty to their ability check roll (See Combat section).

Protector (8th level): At 8th level, when wielding a shield or off-hand weapon and within 5ft of an ally, the fighter may once per round impose a -4 penalty to attack rolls coming from an opponent that is attacking said ally. This must be declared immediately after the opponent attacks an ally before damage is tallied.

Weapon Mastery (9th level): When 9th level is reached, the fighter’s weapon specialization is further improved. The fighter will gain an additional +1 to hit and damage when fighting with weapons or unarmed attacks. At 13th level, the fighter can reroll any 1s or 2s on the weapon damage dice, taking the new roll even if it’s a 1 or 2

Publisher
Nice, I like that. One thing I've done with my re-worked OSE classes is to flatten the THAC0 and saving throw progressions, so instead of seeing, for instance, all of the fighter's saves improve by 2 at reaching 4th level they improve by 1 at reaching 3rd and then another 1 at 4th.

thirdkingdom said:
Nice, I like that. One thing I've done with my re-worked OSE classes is to flatten the THAC0 and saving throw progressions, so instead of seeing, for instance, all of the fighter's saves improve by 2 at reaching 4th level they improve by 1 at reaching 3rd and then another 1 at 4th.
Click to expand...

Yes, I also did that for AD&D. I prefer a smoother progression.

BTW, I like the tip o' the hat to Trampier.

BTW, I like the tip o' the hat to Trampier.

Glad you caught that

There are other homages as well, like this one 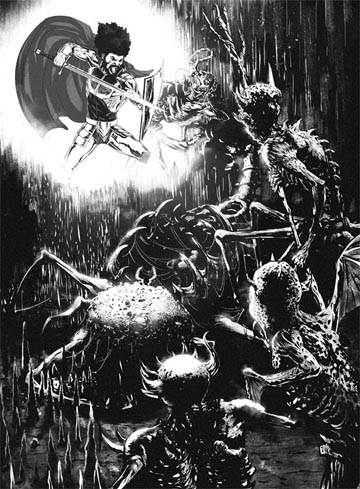 and then of course all the dragon art was done by Brian Thomas, who does a great old school style ala James Holloway 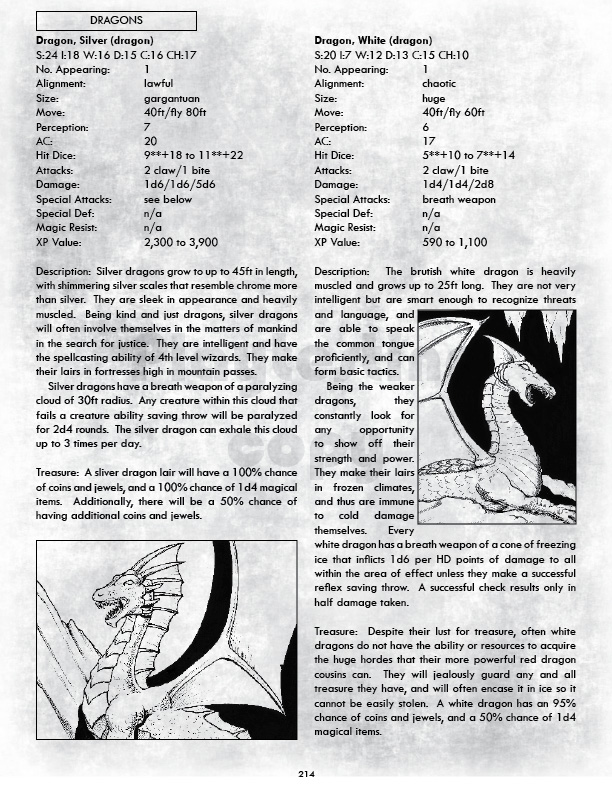 OSR [Geek Native] Interview with the creator of Chromatic Dungeons