I have just uploaded CLEARLY STRUCTURED Character Sheets for a perfect overview! to the downloads area. 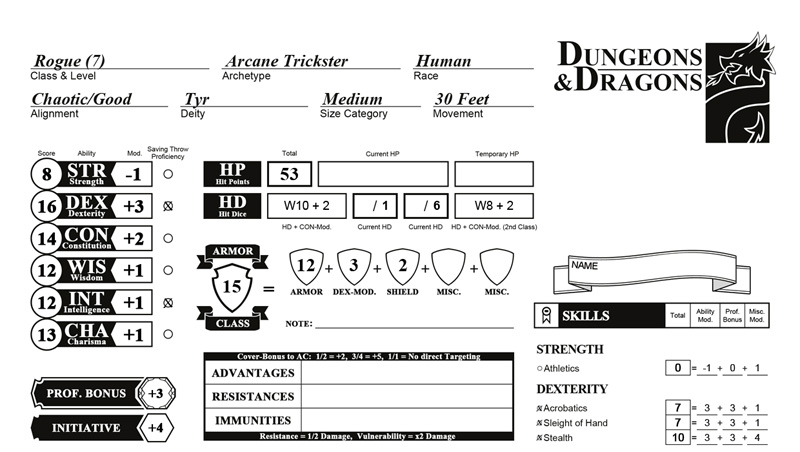 I have created new character sheets for the 5th Edition of D&D. My intention was to create a balance between usefulness and design. After several sketches and revised versions my custom character sheets are finally done and come in different variants. Click this link for a small preview.

Pages 1 and 2 are meant to be combined freely. Especially spellcasting classes will be able to decide whether they want to write down their spell slots on either side and how much space they need for their spell list.

All variants are available as "blank" PDF. In addition all character sheets come as MS Word documents and can be filled completely on PC! Comment: In MS Word it might look like some fields/gaps are not placed properly. Nevertheless the printed documents should show everything correctly. Make sure not to add additional rows using the tabulator key!

There are two versions of all sheets: English and German.

In case that you are German, you might also be interested in my "D&D Regel-Kurzübersicht" . On 18 pages it includes RAW of the three main rule books as well as interpretations of the game designers. All in alphabetical order!

You can find the file here in the downloads section. Please use this thread for comments.

If you have wishes/suggestions let me know!

I really like your sheets, the icons make it, and I've always felt like some classes should have specialized sheets, not one size fits all. I would however like to see a "what this is for" sheet with some notes as to your intentions for some of the boxes and features. Other authors on this site do the same (just look up character sheets) and it's super helpful. I'm just a freak and would want to use as much of the sheet effectively as possible.

Thanks for your reply! Sounds like a good idea. I will do so, when I have a bit more time.

Within the next months I am planning to convert this whole character sheet concept into a generator, so everybody can create his own character sheets using his favored features from "tiles".

I like these character sheets, they look fairly uncluttered and with enough space to be usable.

- I would prefer if the list of SKILLS worked the same as the list of TOOLS i.e. not a complete list but instead just a blank section where each player would write only the skills the PC is proficient at. This way, a lot of additional space is saved on the sheet. In general, there is little need to fill in information for a skill if you aren't the primary expert in the group and all you do in the end is just roll d20 + your ability bonus.

- I don't understand the section on Hit Dice. Why not just writing the total from all classes e.g. 5d8 + 3d10? You need only 2 boxes, one for the total and one for those already used (or alternatively the ones not used yet). Most PCs are single-classed, and multiclassed PCs may have more than 2 classes: so with one box for the main class and a second box for a second class, you're doing a disservice for everyone except those who have exactly 2 classes.

- What is the section "Advantages" about?

- Also what do you expect to write under "Defenses"? If you mean armor/shields, notice how this would be the third place where they are written, besides under AC and under equipment. This is probably redundant.

- I really appreciate the breakdown of AC, IMHO it is really the only stat in the game which you need to know its individual bonuses, because sometimes you drop your shield, some other times you aren't wearing your armor etc. Pretty much all other stats can be safely listed on the character sheet with just their totals.

- I'd remove "type" and "weight" from the Attacks section, you don't need a reminder on whether a weapon is piercing or bludgeoning! Weight info is largely ignored by most gaming groups, and when it's not then it's more a matter of tracking the total carried gear -> not needed when making attacks, can be moved to the equipment page.

- Something I've been thinking in the past... special abilities would benefit A LOT if they were listed on the character sheet by action type: action, bonus action, reaction, passive, short rest... The problem is that you can't know in advance if a PC will have lots of bonus actions or none at all. So an alternative to grouping them by type would be to have a small column to signal the type of action needed.

My comments on the second page:

- IMXP it's best to keep the Equipment section as generic as possible, just the main "Equipment" table + the box for money & gems (or whatever can be used as currency). A separate magic item section can be both a waste at low levels, and largely insufficient at high levels. If you have a section where there is a large variance on how many items may or may not be written, IMHO it's probably worth merging with another section to share the space.

- Also do not be afraid to leave plenty of space i.e. one whole page for equipment/possessions and nothing else, instead of sharing a page with spells.

- What is the point of the last section on "Total Weight"? If you want to keep track of weights, you can do better than this, consider the following:
a) you already have a column for Weight in the main Equipment list
b) if you move all equipment data to its own page (instead of sharing the page with spel, you can use the whole width of the page for your main "Equipment" table > you then have enough room for new (small) columns
c) besides "Quantity" and "Weight", I would then consider adding a small column for "Value" and checkbox columns for "Equipped" and "Attuned". The "Value" column could be useful to remember roughly how much an item is worth, should the PC need more cash (but can be left empty e.g. for items that are unknown in value or cannot expected to be sold). The "Equipped" column indicates if you're carrying the item with you and it's ready to use (although you might also consider two separate "Equipped" and "Carried" for further distinction), in which case you should add its weight to the total carried weight; non-equipped/non-carried items are the stuff that your PC owns but doesn't carry around at all time. "Attuned" is for the 5e specific rules on which permanent magic items are usable at all times.

- The Spellcasting section is always a huge pain to design... It's impossible to cram all the info of each spell into one line, you'll always need the spell's full description anyway, so you should minimize which parameters get written here. There is also a large variance in how many spells are known by different classes (esp. Sorcerer vs Wizard), and this means that even if it'd be useful to separate spells by level, it is not possible to choose a number of rows per level that guarantees enough space for everyone without typically ending up with a lot of unused space... In addition, if you ever have a character with 2 or more spellcasting classes, the character sheet will be a complete mess. IMHO the true solution is not to use the character sheet to list your spells, but to use spell cards instead, but this is beyond the purpose here, so let's just assume we do have to have a spellcasting section

- Your first section under "Spell List" is fine, but the Cantrips list only has 2 rows. You can afford to have more of them, to write one cantrip per row.

- I really think you need to organize spells by level, instead of writing the level on each row, otherwise it's way too slow to sort through all spells and too easy to overlook a spell mixed with those of different level. It's very common for a player after all to look at her highest-level spells as first choice. But this separation by level could also be left for the player to do, depending on her class.

- An important addition would be an indication of the casting action/time. For most spells is just an action, but when it's not an action then it's important to have a quick reminder: you might lose an opportunity to cast a bonus spell, or you might waste time not noticing a spell can't be cast in combat, without such reminder. You should be able to fit this information in place of your "Level" box at the beginning of each row, where it is immediately noticed.

- The "Ritual" and "Prepared" checkboxes are indeed very useful! Consider also adding a checkbox for "Concentration", so when the PC is already concentrating, the player can quickly know which spells would cause the ongoing one to end.

- Other components (V, S) can be occasionally important, but some gaming groups ignore them. Probably my choice would be to have a single column large enough to write all components, something like "V, S, diamond dust(C)" with (C) indicating it's consumed.

You can of course live without those additions. You have to consider the trade-off between increasing the information here (which speed up the player's process of choosing what to cast) and cluttering the space (which slows her down again). But if space gets too tight, you can outright decide to use the whole width of the page for each spell row, and then you'll plenty of room for other quick info, such as duration and range, or even a summary of effects.
Last edited: Apr 28, 2017

Thanks for all your input! Happy to hear that. There are quite a lot of interesting thoughts and suggestions. Some of them I already planned to work on. Some others are definitely giving me a clue about how people other than me (as the creator) consider these pages. So, your feedback is really appreciated!

About one year ago I started to collect thoughts from and already worked to implement some of them, to fit everybody's wishes. But after I realized that there are SO MANY of different wishes, I noticed that I would have to go another way with this. Because adding more and more pages (for different classes/preferences) would be too much work and not efficient.

I talked to a friend that is a programmer. We decided to create a character sheet generator based on tiles, so everybody can create his own sheet. At first, this could be limited to some measurements. Perhaps we will start with some really basic options and extend the project later on. The character sheets are planned to be extractable as PDF and completely fillable on PC.

Because I have a lot of work to do at the moment, I won't be able to start this project within the next 3-6 months. But we will definitely go for it. Please keep in mind that I won't likely work or edit this existing pages before that. Possibly I will add a "FAQ" or "what this is for" document earlier.

I appreciate every feedback and I will take it as inspiration and consideration for the future! So feel free to leave comments!

Thanks in advance and best regards!