So Wodan is "Mercury"
Freya is "Venus"
Tyr is "Mars"
Thonar is "Jupiter"
and Kronos is "Saturn" as it is for the Greeks.

So it looks like you picked names from different pantheons of gods for the various planets.
What are the conditions like on Each planet?

I believe Freya is the Venus stand in, and I read somewhere that it has a thick cloudy atmosphere which is habitable at higher altitudes. the real Venus has a day that's longer than its year, but that doesn't really matter since its surface is uninhabitable anyway. You described floating islands. the upper atmosphere of Venus rotates once every 4 days, so you could say at certain altitudes, the winds will whip you around the planet once every 100 hours. The Sun appears twice as bright from above the clouds of Venus as it does from Earth.

Mercury is a moon-like planet with lots of craters and some volcanos and mountain ridges, in a fantasy universe Wodan might look something like this:

This is what a habitable "Mercury" would look like from Space.

I assume Tyr is habitable to some degree but not too habitable Maybe Tyr would look something like this: 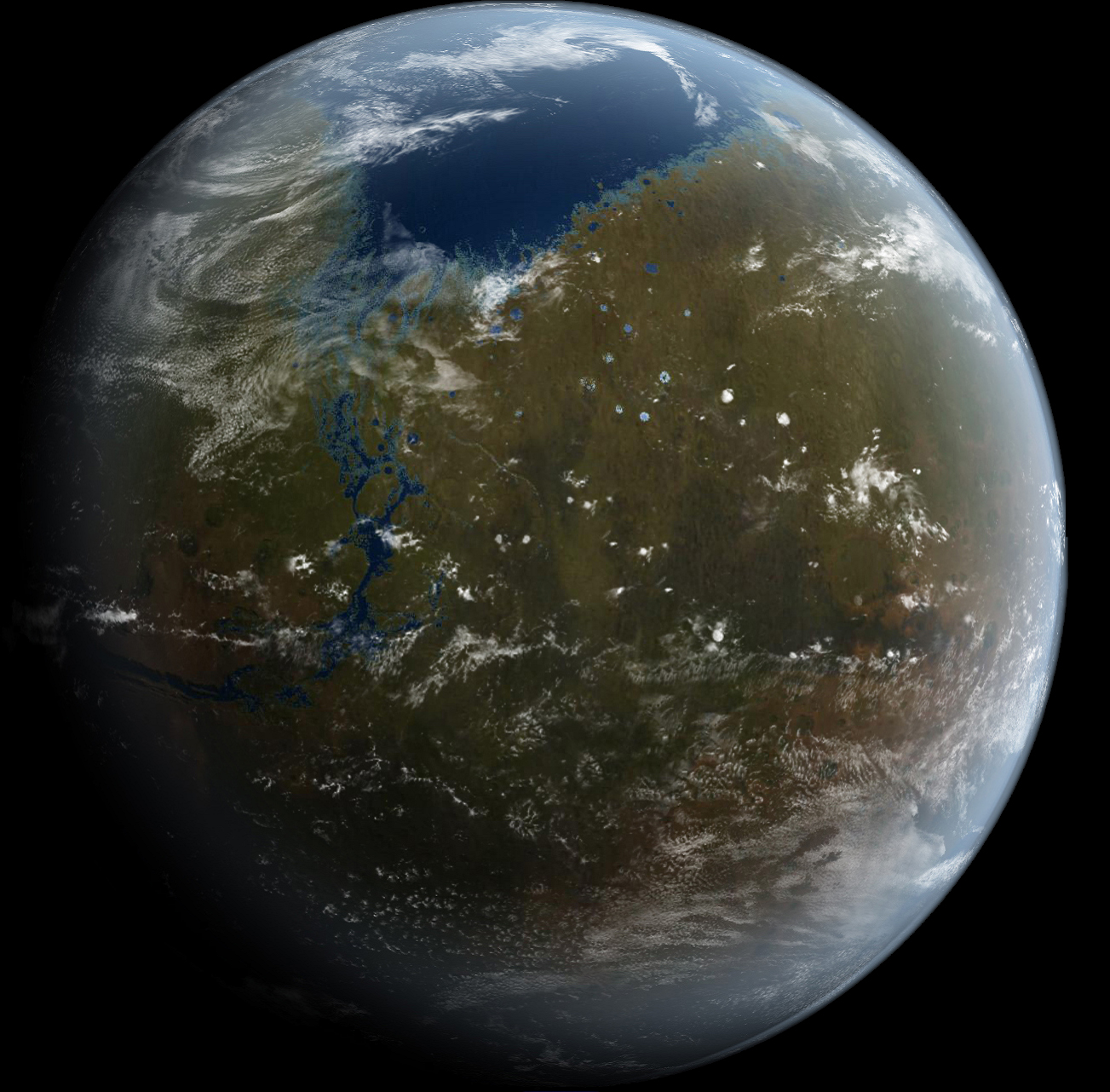 I like this picture, show Mars as largely a desert world with small oceans, but a habitable one, survival on its surface is not easy, but you don't need a spacesuit.
I don't know what your version of Jupiter or Saturn would look like. Jupiter has crippling gravity, but Saturn's is roughly the same as on Earth.
N

Here's the first post in a series detailing the Island of the Minotaurs on Homeworld.

Noticed the Island of Minotaurs is actually Crete itself.

You know Crete was also suspected to be the actual site of Atlantis, you might want to put some merfolk off of its shores and perhaps an undersea kingdom as well.

Thomas Bowman said:
You know Crete was also suspected to be the actual site of Atlantis
Click to expand...

The suspected sites of Atlantis number in the dozens.

NMC said:
Here's the first post in a series detailing the Island of the Minotaurs on Homeworld.

These are awesome. I just found your blog, and I've been very impressed. Thanks for sharing!
T

Morrus said:
The suspected sites of Atlantis number in the dozens.

There is a good case for Atlantis being Crete.

The Minoan palace and buildings discovered at the digs at Knossos on Crete and at Akrotiri on the island of Thera have revealed that the Minoans possessed advanced engineering knowledge enabling the construction of three- and four-story buildings with intricate water piping systems, advanced air-flow management, and earthquake-resistant wood and masonry walls. This level of technology was, it is said, far ahead of that found on mainland Greece at the time.
There are no classical records of an Atlantis-related volcanic eruption in the eastern Mediterranean so it must have occurred before the development of writing, perhaps before 1000 BC.[4] Thera (also called Santorini) is the site of a massive volcanic caldera with an island at its center. Vulcanologists have determined that the island was engulfed by a volcanic eruption around 1600 BC. The event, referred to as the Minoan eruption, was among the most powerful eruptions occurring in the history of civilization, ejecting approximately 60 km³ of material, leaving a layer of pumice and ash 10 to 80 meters thick for 20 to 30 km in all directions and having widespread effects across the eastern Mediterranean region.[13] Volcanic events of this magnitude are known to generate tsunamis and archaeological evidence suggests that such a tsunami may have devastated the Minoan fleet and coastal settlements on Crete.[10][4] Such an event would have been noticed as far as Egypt, as a period of darkness. Egyptians could have told Solon about such an event.[4] Plato did not describe a volcanic eruption, although the events he described as "sunk by an earthquake" or "violent earthquakes, and only a flood (in singular)", could perhaps be interpreted as consistent with such an eruption and the resulting tsunami.[14]
Click to expand...

The Term "Minos" is where the word "Minotaur" comes from. The first Minotaur was supposedly a Minoan prince who was cursed by the gods, or so the legend goes.

Since the geology of Homeworld and Earth appears to be the same, maybe there was also a volcanic explosion in the island that we would call Thera, causing a massive tidal wave wiping out whatever civilization that might have existed in what is now the island of Minotaurs. Just an idea of course.
Last edited: Feb 25, 2018
T

Schmoe said:
These are awesome. I just found your blog, and I've been very impressed. Thanks for sharing!
Click to expand...

Yes, me too! I am working on a map of Europe that maybe could be used in this setting. It is a hex map showing terrain features. I am lifting off the labels, so using this map you could label it however you want.
N

Building on the previous post, here's the upper level of the minotaurs' labyrinth.

And here's the lower level, the minotaur stronghold.

Here is my generic D&D map of Europe with all the cities removed and hexes renumbered so as to more legible. I think you can take it from here and detail this one for D20 Pirates, and I'll do my own for my project.
https://orig00.deviantart.net/91fc/f/2018/079/b/5/europe_1100_ad_numbered_hex_map_by_thomasbowman255-dc6fqoe.png Here's a piece of fiction set on Homeworld in the Sol System.

This post adapts a deck plan that I drew previously, making it consistent with the stat block and description from the Pathfinder supplement Ultimate Combat.

Here are stats for the crew of the bark Skylark, who appear in the previously posted short story "Act of Faith."

This story continues the tale that started with "Act of Faith."

Here's a layout for the pirates' hideout as described in "Darkness and Light."

This post presents stats for Martelli and his officers.

Tying into the previous short story, here is the layout for a lizardfolk village, along with suggestions for incorporating them into campaigns.

Here's a link to another PDF compilation.