Bene Gesserit style might even call for a different class feature instead of the flurry?

Garthanos said:
Bene Gesserit style might even call for a different class feature instead of the flurry?
Click to expand...

It's been a while, but wasn't the real, in-the-book, Weirding Way more like Memory of a Thousand Lifetimes?

Tony Vargas said:
It's been a while, but wasn't the real, in-the-book, Weirding Way more like Memory of a Thousand Lifetimes?
Click to expand...

That was the generalized yes we are able to plumb other generations awesome (there was no sound attack) but there was using the voice in a hypno-enhanced way.

Garthanos said:
That was the generalized yes we are able to plumb other generations awesome
Click to expand...

Sounds like a good reason to be able to swap out exploits, too. Take a short rest, meditate, 'remember' a different trick no one's used in generations.

Tony Vargas said:
Sounds like a good reason to be able to swap out exploits, too. Take a short rest, meditate, 'remember' a different trick no one's used in generations.
Click to expand...

Yes could indeed be perfect rationale for exploit swapping.

Note an intimidate use by the book can induce someone to do an action ie something with ridiculously open ended nature ... unlock my cuffs or the like. One way of using the voice might be buffing that ;p - man not sure what they were thinking

The attack adjacent ally is a straight forward power though swipe from wizard base on charisma.

I know I know... the feat which lets you remember past lives lets you swap out exploits
and Deva get it free ;p

I already have educated Fighter letting you have a book of Techniques for that martial type.

The feat for getting access to the plethora of monk maneuvers can be called "Weirding Way" of course.

So I feel like the Weirding Way and the Bene Gesserit what is the Charisma Using Martial Artist Tradition maybe it should probably dabble in leader elements in some sense . The Bene Gesserit were politicians aka the illuminati with actual powers.

"I have no fear, for fear is the little death that kills me over and over. Without fear, I die but once."

Let me see what we can pull from the dune wiki

Physically, a Bene Gesserit could control every muscle and nerve in their body, right down to the individual fibers. They were supreme in the disciplines of prana and bindu. The results of this training were numerous abilities, including:


Bene Gesserit mental abilities included supreme levels of discipline. A Bene Gesserit mind could alter its level of consciousness, for the sake of relaxation, and hyper-alertness in times of potential danger. Moreover, a Bene Gesserit trained individual could:

The above does not mention the genetic memory but it is the empowerment when they take the Waters of Life so its gained concurrent with the ability to shrug off even the most intense of poisons.

A history skill bonus as well as power swapping as well as...

A number of those could indeed work as martial practices or perhaps already are actually such as Transcendental meditation and Feign death and forestalling afflictions variously.
Last edited: Nov 15, 2019

Perhaps the best way to build one might be to take the Deva and make it Bene Gesserit "race". Alter damage resistance to be Necrotic and Poison perhaps. They are genetically engineering themselves after all.

Build up the Voice as both a charisma based monk power or maybe more than one and otherwise an extreme uses intimidate like I said needs some cha in there ... they seem to multi-class well with Warlords too.

Tony Vargas said:
...I could see a full, Marital Controller class that embraces martial-arts Masters of all stripes, and a post-E style hybrid Martial|Psionic "Monk" sub-class that uses mystical-Ki-as-Psi
Click to expand...

Right, "hybrid" has a jargon meaning.
I meant the Monk could be a sub-class rather than a full class, and, like the Skald, Hunter/Scout, and Berserker combine Martial with another Source - in the Monks case, Psionic.

Tony Vargas said:
Right, "hybrid" has a jargon meaning.
I meant the Monk could be a sub-class rather than a full class, and, like the Skald, Hunter/Scout, and Berserker combine Martial with another Source - in the Monks case, Psionic.
Click to expand...

Sure I am looking for inspiration for going further with the Charisma secondary build of the monk. Betrayal from the Psion class is pretty good or the hypnosis wizard at-will. But not thinking Dex is an element if you see what I mean. I could see something like a sword dancers move where clever nubile movement is used to hypnotize with charisma backers but hard to make that feel like "The Voice." - straight Charisma abiltiy with a bonus so that Charisma is only secondary?

A Predictive Intelligence where Intelligence was used in place of Dexterity might actually fit for Bene Gesserit in general though. They are also somewhat fond of mixing with Mentats so that might go a long ways. It seems a bit uber in some sense.

There is a Bard ability that allowed them to use Charisma for basically all your Multi-classing / Hybrid Powers wasnt there?

The presentience and Mentat Training element of the Quisad Saderack / Paul Attrides and other characters in the story (who are both Mentat and Bene Gesserit) similar makes the idea of Predictive Intelligence feat rather attractive. It would allow a Int Charisma Psion hybrid as Monk without much more to be said on the matter. Those who do not have that would be still be MAD but the heroic special cases.

Mechanically there is a precedent while it specifies multi-class I am thinking it ought to work with hybrid powers as well. 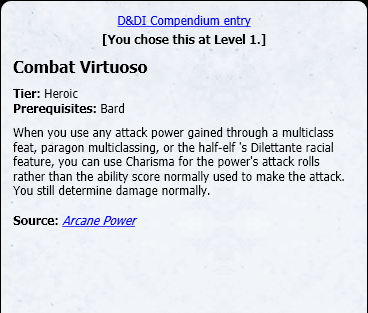 I am thinking of making a Feat Predictive Intelligence to allow Intelligence to be applied to Dexterity attack powers or the rider effect of an attack power which grants a bonus based on Dexterity, which is kind of narrower than the above (possibly allowing initiative based on Int) seems like a good idea and really fits the flavor too.