ok iteration to create the Dex based Hypnosis 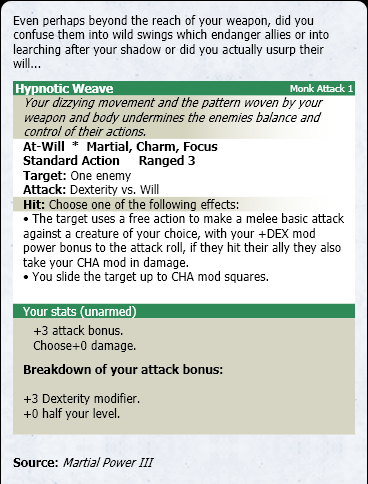 It turns out there is a Charisma based monk build.... the Desert Wind one the elementalist flavor SMH

Ok hypnotic weave needs a clause so it's better for the soft style and limits so it's not an unadulterated controller power for a striker monk.... like soft style getting a slow effect instead of damage... or the hard style doing str or con

So the feat Predictive Intelligence modelling it after the Bard one. Combat virtuoso. I could make it a Psion class power to allow the Bene Gesserit to be a psionic class but use intelligence as the foundation for their Martial Arts of course with that I do not need hypnotic weave and figure the BGs get there mind control directly from Psion abilities.

Oh look what I found... ok its just a fan produced ability but very familiar in function to the Predictive Intelligence one above it rather made me blink. 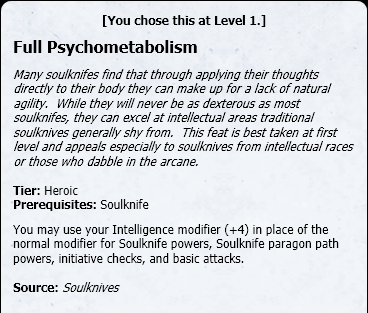 Predictive intelligence Inspired by the Bene Gesserit / Mentats it could be race limited but its perhaps really just the Seer background not ironically the Bene Gesserit were also called witches and so we have the Witch with her Augury. The Doctor Strange who in MCU is high on time magics is another example where time magics and martial arts are ahem in sync. The Bene Gesserit are optimally even in story more like Lazylords with a dash of psy flavor going on.

It seems a good race enabler and I am thinking for Int high based races like Deva (a close analog for BG) or Tiefling or Shardminds or similar and it could even be opened up to doing other Dex based classes and do not see a mechanical reason it wouldn't be reasonable for Rogue for instance. (The Duelling Daggers trick is also part of the Dune scheme). A Mentat with Predictive Intelligence as a rogue could work fine.

It is also a multi-class / hybrid enabler style feat (The monk is a rather poor hybrid with the Psion). Arguably in a sense it's mostly a sideways change - with the uses Int as a basic attack clause being the ironically the power upwards benefit. And you could if that is all you wanted without the Seer/Prediction flavoring take the feat Melee Training for a normal Dex monk and have the same empowerment. (no I do not use nerfed melee training of you do nerf this too).

At the moment its written and implemented in my Character Builder as a monk specific feat without other limits. 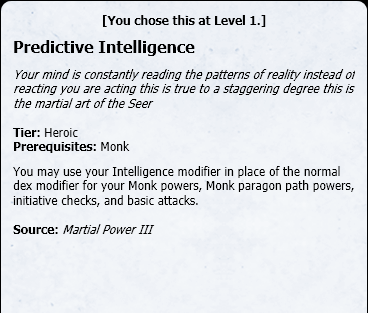 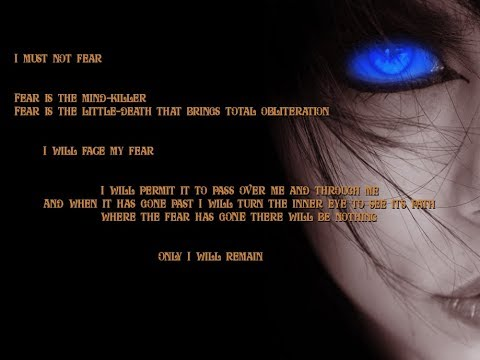 Paragon Path - Tiger Palm
"Pain Happens, Suffering is Optional"
Prerequisite: Monk, [Gentle Hand Style]
Soft Action: (11th Level) You may Spend an action point as an Immediate Interrupt. This counts towards your limit of Immediate actions per round. If you use this action point to attack, you gain a bonus to your damage equal to [modifier]
Tiger Palm Philosophy (11th Level): When you perform an Immediate action, gain Temporary Hit Points Equal to [modifier]
Flowing Through the Cracks (16th Level): When attacked by a creature granting you combat advantage, you may shift your Wisdom modifier in squares as a free action after the attack is resolved. Each enemy adjacent to you at the end of the shift grants combat advantage to you until the end of your next turn.

Tigers Inspired Surge [Tiger Palm Utility 12]
Encounter • Implement, Psionic [Martial], Healing
Standard Action • Yourself or Ally in Burst 1
Effect: The target regains hit points as if they had spent a healing surge and may make a Saving Throw against one effect that a saving throw can end.

Ultimate Pain Relief [Tiger Palm Daily 20]
Encounter • Implement, Psionic [Martial]
Immediate Interrupt • Melee touch
Trigger: You or an adjacent ally are hit by a creature's attack
Effect: The creature deals damage to itself equal to the triggering attack, you may slide the Target up to [modifier] squares to a square adjacent to yourself. Each ally adjacent to the Target at any point during the slide may make a melee basic attack against the target.