For the past few months I have been drawing some maps for Roll20 (and other virtual table tops) and I wanted to show them here as well, maybe some of you will find them useful for their online sessions.

Most of my maps are squared so it shouldn't be too much of a hassle to place them on Roll20.

Thank you for taking a look! 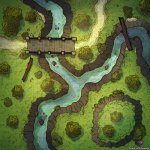 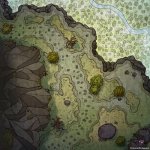 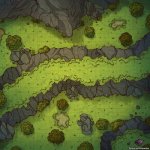 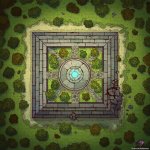 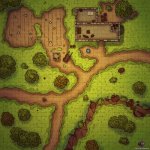 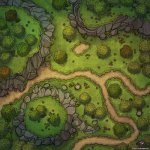 These are fantastically well-made - checking out your Patreon site now!

Xaelvaen said:
These are fantastically well-made - checking out your Patreon site now!
Click to expand...


Thank you so much for the support!

Hey guys, I'm back this week with another forest map. It's something that's simple in concept, but that can be used in a wide variety of adventures and campaigns: it's a crossroads map!

I try to give my players as much freedom as I possible can, and presenting them with multiple paths they can take makes for a lot of interesting exploration possibilities. Maybe they'll decide to visit a kingdom you hadn't planned on them visiting and have lots of excellent adventures you otherwise wouldn't have had.

The map lends itself well enough to be of use those times where the party is chasing some enemies and, using their tracking skills, decide on which route to take. Quite great when the ranger rolls a 1 and they end up going to who knows where. 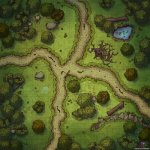 This week I have a very exciting map for you guys! I initially set out to make a simple lava pass, but after a couple of iterations I came up with a very interesting design.

The objective of this one is to cross from one side to the next, but the catch is that there isn't an easy way to do it. At least not without the help of some wizardry.

I decided to place a floating rock in the middle, suspended by the magic of the crystals that surround it. These crystals could, if you so choose, teleport party members from one to the other. They could be activated by touching them, by sacrificing an item (sapphires, emeralds, rubies, etc) or by casting the right spell.

But that's not all, even with the teleportation magic, they still need to work together and use the items they have at their disposal (rope for example) to successfully traverse the terrain.

Use that simple puzzle with the addition of some enemies and you got a pretty intense encounter! Especially if the enemies use the crystals to their advantage and teleport the party members around (the teleportation might have an area of effect). And do try to push your players down to the lava just like I love doing for added challenge.

Lastly, I had another idea where the party stumbles upon a powerful adversary. This enemy of theirs is sealed away deep underground by the power of the crystals. But their magic is fading, and they will have no choice but to set the evil free and destroy it before it grows too powerful.

As to who put those devices here, in this inhospitable place, I'll leave that up to you.

As an aside, I think this map could go very well in a Nine Hells setting or similar, or if you're sending your players deep underground.

Oh, and here's a variant with no crystals, should you find that more useful.

This week I have for you another forest map for you to use. This map is partly based on an adventure I ran for my group about a year ago, which in turn is heavily based on a Lovecraft story. And Skyrim, because why not.

That time I was skimming over one of the Pathfinder bestiaries for some cool monsters. And even though we play D&D almost exclusively, I very often go to the many PF bestiaries for more weird and unique monsters.

Anyway, I came upon the Color Out Of Space entry and it was a perfect fit since I was looking to run a one-shot horror adventure. We ended up basically recreating the Lovecraft story in a D&D setting. I had them investigate a spooky town for clues, there was a huge crater involved, crazy townsfolk infected by the space color, all the good stuff.

Like in the story, the Color was hiding inside the local well, which they eventually fought. Now on this map, the well is in the forest, so maybe your players can find some unspeakable horrors lurking within it while exploring the wilderness. Or maybe not, it looks just like regular well after all.

Near it, I drew an abandoned shack (similar to those you find when wandering around in Skyrim) that you can furnish to your liking. Perhaps your players can find a dead body with a mysterious note, incriminating one of the local lords in the grizzly murder of a beloved townsperson, or maybe they just use the shack to protect themselves from the large group of goblins who're terribly mad at them because the rogue stole their belongings, as rogues tend to do.

There's also a variant with basic furnishings in case you find that more convenient.

What I really like is that you provide the dimensions of the map, something that many Rolld20 maps do not include.

I have a couple of new maps for you today, a small camp in the forest and another lava map which I like to call The Ring of Fire.

This week I have drawn my second river crossing battle map. I have expanded upon the idea a little bit and also added a ruined tower in the bottom right corner of the map.

The top of the tower is all ruined and as such the stairs don't connect to anything, but if you wish to use it as the bottom floor of a full tower then there shouldn't be too much trouble since I have left the stairs mostly intact.
This place is a good hiding spot I think. Perfect for placing hidden enemies or even some items within its ruined walls.

In addition to that, I've placed enough rocks in the river should your group prefer to take an alternate route. Maybe the bridge is too much of a bottle neck and the rogue can cross the river to wreak havoc behind the enemy lines.

Greetings, it's me once more!

I was in the mood of drawing a jungle environment and as such I present to you my newest battle map: Jungle Lake!

I added a lot of palm trees to this one so the party (and monsters!) have to be careful with line of sight and cover.

The lake in the middle of the map can provide some sustenance to your players in case they haven't been drinking enough liquids lately and it's also a great place to hide some aquatic monsters for the group to fight.

In the event your players are traversing the harsh desert environment, this map also works well enough as an Oasis. Go ahead and put those Ancient Egypt inspired monsters to good use!

This time I bring you a map that has a variety of interesting terrain. At the bottom of the map you can find a forest area that can bridge any number of my maps with this one. And as the main event there's a large cliff with three waterfalls.

The party can choose to jump on the rocks on either side of the map to more easily reach the cliff and try to climb towards their next destination.

The large area with water in the middle can be used to more easily add water-based monsters to the encounter you have planned, and it's large enough to be able to house a big boss monster too!

At the top you can find a few small rivers. These can be used to the advantage of either the party or the party's enemies by casting electricity-based spells. That way you can close off the little "islands" and make for a more interesting encounter.

How are you enjoying Descent Into Avernus? I was inspired by the new adventure module to do a battle map that can be used while adventuring in the first layer of Baator. Though if you're not running the adventure fret not, as it can be used as an underground volcanic map too.

Taking the Avernus angle, I thought you could use this battle map for a random encounter. I've drawn several lava pools that the players have to avoid while battling devils or any sort of monsters you have prepared for your adventure.

Bonus points for the DM if one of the random fireballs flying across the sky of Avernus hits one of the lava pools and causes splash damage to the players, making them panic more than they should.
I've included a variant without the bridges as well, making an already difficult to traverse battle map even more more challenging.

I'm back this week with a new forest map! This one is the always handy straight road in the forest, something that a lot of campaigns end up using sooner or later.

I added a few fences to make the map a little bit more interesting, as these can provide partial cover for the characters or monsters involved in the battle.

Forest density is medium, providing plenty of opportunity for hiding while still keeping some open areas for maneuvering.

Your Shack in the Forest became the home to a hag in my Ghosts of Saltmarsh campaign. Very cool.

These are some gorgeous maps!

Thank you all for the nice comments!

Since it's now my favorite season over here, and I wanted to share with you my autumnal cheer with this new battle map.

This one is a very relaxing landscape with a small lake where the local monsters gather to dance for their magic rituals. Where the trees provide ample cover opportunities and where the top of the cliffs provide good vantage points for adventurers and their enemies alike.

There's also a small passage in the bottom of the map, great for when you want to lead the party into a more mountainous area.

I hope to draw more autumn maps like this one in the future since I love the way forests look in this season.

You sir are feeding my crippling cartography addiction.

And you are doing the Lord's work.