Do you modify/write-in your game books?

I was adding tabs to my second player's handbook (I keep one in my office and one down in the game room) to help navigate it more quickly (dang, the 5E PHB index is garbage!) and thought about how I have modified my game books not just just for D&D but lots of games I either play a lot of and/or later found errata for. 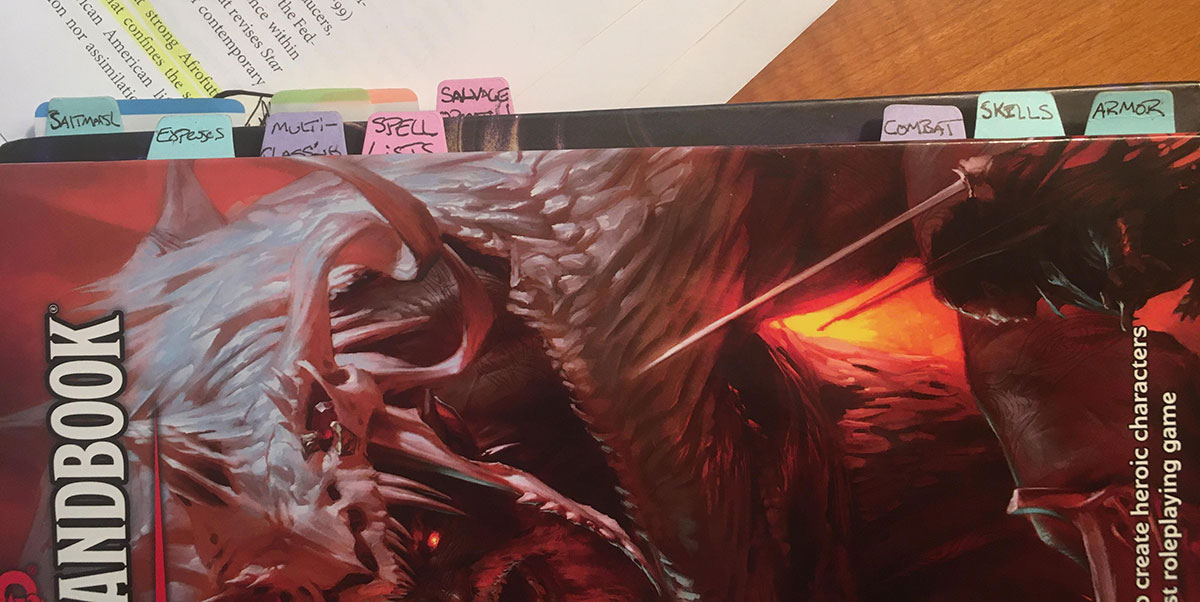 So for example (as in the pic above), I have stick on tabs on my PHB and my copy of Ghosts of Saltmarsh. Looking through the 3.5 PHB recently I remembered that I had sharpied an asterisk on every spell we had house ruled for the setting (which were a lot). My 1E Monster Manual has my 7th grade scrawl under or above the stat block for most frequently used monsters that lists XP value since that was not added until later books (1E Fiend Folio was the first time I remember seeing that) and you had to look at the 1E DMG to know it back then. In the Manticore example I attached, I just straight up changed how much damage it did for some reason and wrote down the hps for one example. 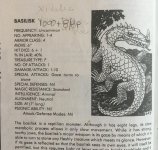 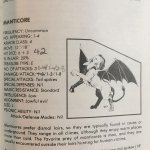 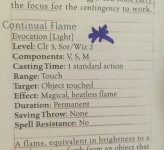 One of my several Car Wars rulebooks had so many printing errors and the like that I went through and corrected them all in pen.

My copies of Dungeon Mag and old modules have tons of marginalia and like 75% of magical items just straight up crossed out (in pencil usually, but not always) to keep them in line with my sense of how often to award magical items, and how many and of what type. My copies of Amber Diceless Role-Playing also has a ton of handwritten notes, highlights (another thing I do to most of my gamebooks) and decades old post-its.

Heck, back when I first bought the 1E Unearthed Arcana it was in an era where the bindings on TSR hardcovers were notoriously bad. Not long after getting it, when pages were in danger of falling out, I just tore it apart carefully myself and punched holes in the pages and put it in a binder (allowing me to add other relevant print-out of house rules and Dragon mag articles with available options). This form also made it a lot easier to run the whole book through a copier at my summer job at the time and make copies of the book for all my players. (I just wish I had kept a copy when I purged gaming stuff a decade ago).

It maybe my love for study and scholarship, but I tend to write in most books I own (one of the reasons why I prefer print), I just do it in game books more because of how they are engaged with.

So tell me, do you modify your rule books at all? Write in them? Cross stuff out? Stick in inserts? Do you maybe purposefully print out PDFs so you can write on them without "defacing" the actual book? Do you treat them like slabbed comics?

I tab them on the top not on the side. Write as necessary. On ID them 3 times. Print a shipping label in word. One label on back over ISBN. One on Front. One on first page.
They are your books, do with them what you want.

Write in a book?

Richards said:
Write in a book?

Steals his book and keeps walking. Now I have two copies.

I do in cookbooks. I did as a youngster in gaming books. Not anymore.

I used to write corrections and house rules in core books, but that's not happening as often for me now. I don't think that it's any change in me as much as a change in the RPG industry.

When I first started gaming- well, I still recall that first edition WFRP book I got for Christmas when I was 12. As much as I loved it, the book was still printed on cheap paper and had lots of whitespace around the margins of every page. The charts, tables and writing was all spaced out so that corrections or additions were very easy to do.

I look at the 4e WFRP book now and... Could I do the same with it? It's a much more expensive and beautiful item than the 1e book, so there's a greater reluctance to mark it. The paper is also glossy and harder to write on. Finally, the pages are in full colour and the fonts/spacing show how they've struggled to pack the full word count into their page allotment.

Writing in RPG books is, I suspect, a Grognard thing that's been getting less common as the average quality of RPG books went up.

jasper said:
Steals his book and keeps walking. Now I have two copies.
Click to expand...

Quick! Write in it so he won't know that it's his!

Writing or damaging a book is an unholy act. You lose your damn paladin abilities.

Staff member
I used to. Not anymore!

Write in a book?

I’m so terrified of damaging my books, I never even open them. I hear some of those D&D rulebooks have some good words, too!

No. I don't write in my books or modify them. I keep notebooks for individual games, game sharing a system, and/or games sharing a genre. In the notebooks, I keep copies of errata, faqs, house rules, and other material Currently, I have about fourteen different notebooks dedicated to rpgs.

Now a days I don't, but back in the day a distinctly remember cutting out a little chit of sticky backed paper in order to change the red dragon's base hit dice from 13 to 15 in the Monstrous Compendium.

Since selling some of my print gaming books on eBay for far far more than I paid for them, I now take better care of my game books.
Last edited: Mar 31, 2021

All the time. Books are tools for me, not collectibles, so they get written in and at times are even tossed around without regard for condition. My 3E books are well-worn!

Staff member
I will sometimes stick a sheet of paper of notes in, or have post-it notes. But I don't generally permanently alter them other than having my name in them for when they need to get handed around a table.

I love books far too much I fear. I won't even bend a page. I have bought some books that were "annotated". Most of the time those were modules.

Costs of a kickstarter project (transparency)
2 3