TSR Periodicals published The Dragon issue 35 in March 1980. It is 64 pages long and has a cover price of $2.50. In this issue, we have Traveller variants, a new take on experience points, and big news from Tim Kask! 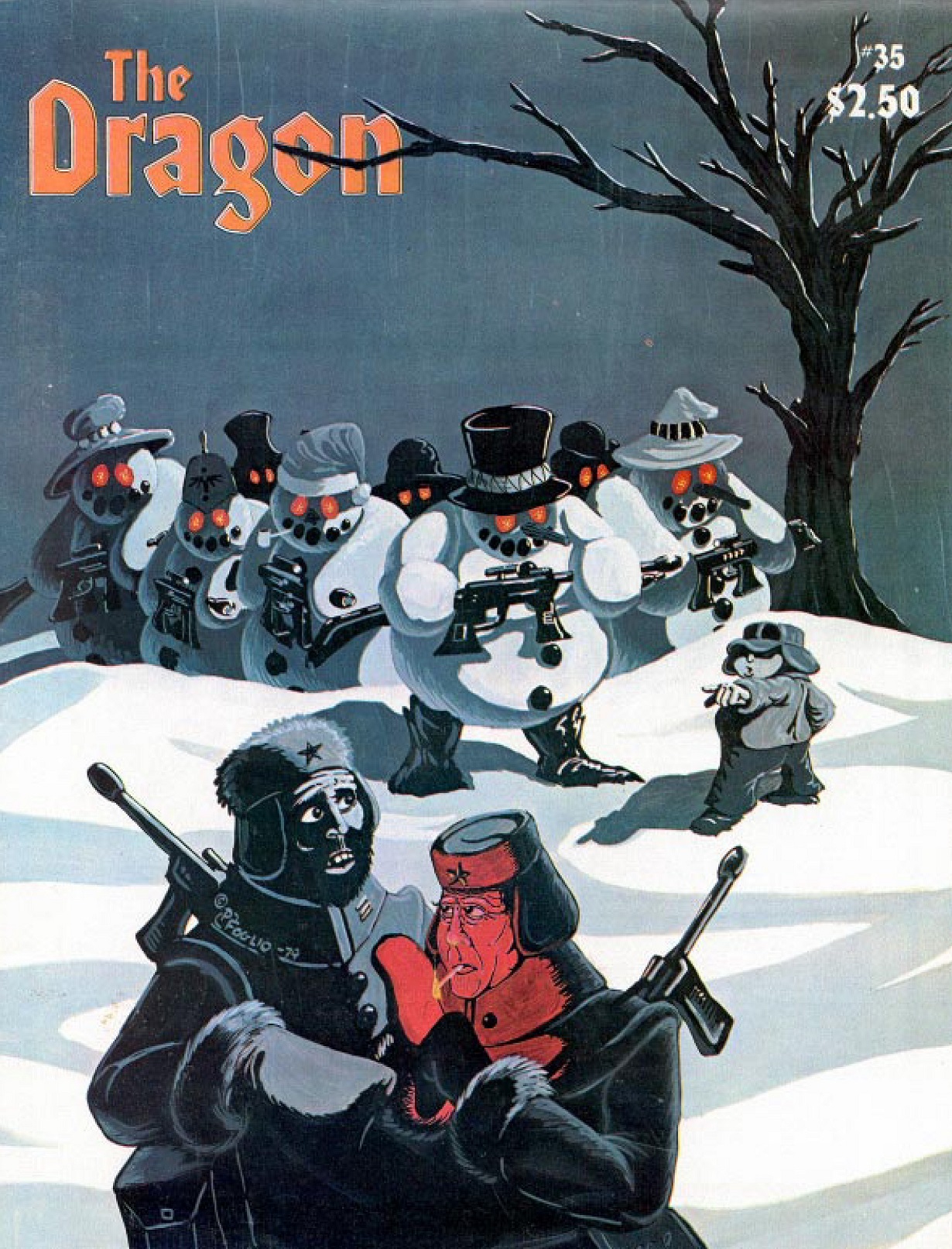 In his "Dragon Grumbles" column, Kask is ebullient about the growth in the industry:

"What was once an esoteric pastime practiced by an avant-garde few has given rise to the newest trend in the toy and hobby industries. I refer, of course, to gaming, whether it is called simulation gaming, hobby gaming, war gaming, role-playing, or military miniatures or adventure gaming."
Click to expand...

However, he also has a significant personal announcement:

"I am no longer the Editor of The Dragon. TSR Periodicals' interests have become so diverse, and we have so many irons in the fire, that I am no longer able to spend the majority of my time on TD. In fact, I now spend only a tiny fraction of my working hours on TD. This has not been an easy or pleasant transition for me."
Click to expand...

The new editor is Jake Jaquet, who made his first contribution in issue #1, and who had been part of the editorial team since issue #5. Kask's new title was Managing Editor, but he would resign within a few weeks.

The regular monthly columns contain a few interesting nuggets. In "Leomund's Tiny Hut," Lakofka suggests that players should have to spend their gold on training to convert it to experience points, rather than just getting an experience point for each gold piece accrued. I think this is an excellent suggestion, as it presents a tidy rationale for the gold/experience equivalence. It also gives characters a way to spend the massive amount of coin they tend to accumulate in older versions of the game.

“Sage Advice” has the usual assortment of questions, ranging from the inane to the interesting. This one caught my attention:

Answer: Thieves can be neutral or evil, but not good. In this situation, I don't think you should force them to make an alignment change. Just have them become their new alignments as if they have always been of that alignment. This way they won't be penalized for not reading their Players Handbook, but the next time they don't read the book, don't show them any mercy—unless, of course, you goofed too."
Click to expand...

A few things stand in contrast to the modern game, alignment restrictions on classes being the most obvious! But I also find it telling that there is a discussion about the appropriate penalty for players who "break the rules," even accidentally. It is a very gamist approach to Dungeons & Dragons.

"Giants in the Earth" returns after a short hiatus, this time with stats for Muitagh the Bowman, Umslopogaas, Edward Bond, and Ganelon. No, I hadn't heard of them either! "Dastardly Deeds & Devious Devices" is also back and presents two traps, the Quickfloor and Pedestal Room. This is the last appearance of the column, with no explanation given for its termination. The occasionally published "Up On A Soapbox" column this month features TSR employee, Terry Kuntz, arguing that wargamers are not necessarily warmongers.

"The AD&D National Player Rating System" makes its debut this issue, which was an attempt to grade the "top" tournament players. It speaks to how seriously TSR took competitive D&D at this period in history. For those who are interested, the top 5 players in the country were: Bob Blake, Ralph Williams, Loren Wiseman, Kristine Batey, and Robin Hostetter.

We have some fiction this month. Cynthia Frazer gives us a short and competent adventure story called "Oasis" that has some faint Lovecraftian vibes. She also published some Darkover stories around this time but then disappeared from the writing scene.

The new "Minarian Legends" column kicks off with the history of Hothior, one of the nations featured in the Divine Right boardgame. This column was short-lived. Another column makes its debut this issue. "Simulation Corner" is focused on wargames and simulation games, and this month describes the history game publisher, SPI.

Gary Gygax returns in "Sorcerer's Scroll" with a column subtitled "What's ahead for TSR?" He leads off with a frank discussion of company revenue:

Gygax then talks about some of TSR's medium-term plans, though he spends most of his word count explaining the various delays affecting everything. One time-sink was the disappearance of James Dallas Egbert III, which ignited the "Satanic Panic" and led to a barrage of bad media coverage but also "did things for sales you wouldn't believe."

One thing that has emerged is a new strategy around Basic D&D. With sales of that set soaring, TSR has shifted resources to creating a sequel (the Expert Set) and now plans a whole series of boxed sets. Hence the D&D/Advanced D&D dichotomy is now set in stone. Indeed, there is so much focus on Basic presently that Gygax defensively notes, "This is not to say that Advanced D&D has been abandoned."

Gygax concludes the column with a vague, "Wherever D&D and AD&D eventually go, you can be sure that TSR has considered the possibility, discussed what it presents, and made plans to exploit it in a way which will offer the most and the best to our fans and customers." Given the remarkable growth the company was experiencing, it's not surprising that plans were in constant flux.

The Traveller RPG, released by GDW a little over two years before, was immensely popular at this time, and this issue includes a collection of variant rules for that game. "IBIS: Profit and Peril" presents a new military career in the Interstellar Bureau of Internal Security, while "Useful Skills" proposes several new, Administration-related skills. "The 'Other' Option" describes new career alternatives, "More Clout for Scouts" has more abilities and opportunities for the Scout service, and "Black Holes!" has rules for interacting with those extraordinary stellar objects.

After last month's lean effort, there are a good number of game reviews in this issue. Gangster by FGU is the "most original" RPG in existence and "could rival even the likes of Dungeons & Dragons." Titan Strike by SPI "is fun, and can be played in an hour." Double Star by GDW "is one of the most solid science-fiction games [Bill Fawcett] has played." War in the Ice by SPI is "fun," but Metagamming's Ice War is "the better buy."

"Compared to some of the $30+ dinosaurs available today that demand that the players be experts in the field to even understand them, these games are much more dollar-efficient. You do not have to read two or three rule books, nor spend needless hours preparing to play. Definitely worth looking into."
Click to expand...

And that's a wrap. Traveller fans undoubtedly appreciated this issue, but there was little here to excite Dungeons & Dragons fans. Next issue, we have high-level pantheons for AD&D, your favorite fictional gunfighters, and statistics for Conan!

M.T. Black is a freelance game designer and a Dungeon Master’s Guild Adept. Please check out his website, www.mtblackgames.com!

I recall having a good giggle over the cover when it came out. Also not caring for the whole player rating system nor the new basic dnd expansion/push at that time. (never was a big fan of basic/expert dnd) I did enjoy the Traveller IBIS stuff as we were playing a lot of Travller at the time.

I miss the printed Dragon Magazine days that reviewed games by other compagnies. We would look at ads and discover other games like Tunnels & Trolls, Role Master (i.c.e.) and many other RPGs. It was much more than a promotional tool for TSR products.

Their Halloween covers were some of the best, and also usually the most clever. I too liked this issue for the Traveller material.

I only vaguely recall this one.....

Supporter
I would be interested to read how a Black Hole was actually handled. These little reviews are fun.

I remember getting this one second hand when I purchased it from a friend. Good times.

As a Traveller fan, this was a good issue. That's one of the things I liked about the earlier Dragon (and White Dwarf), they weren't just house organs. They catered to a wider audience.

For those who are interested, the top 5 players in the country were: Bob Blake, Ralph Williams, Loren Wiseman, Kristine Batey, and Robin Hostetter.
Click to expand...

Interesting two of those names could be women (thanks for the clarification Paragon). Pretty interesting given the idea that women didn't game back then. I think that may occur after this time period as the game grew a larger and larger male audience. Thankfully, that stigma is dissolving away.

I still feel the two different D&D lines was a mistake and caused much confusion and segmentation. I think most AD&D players bought the boxsets but never played it. I was one of them. We only played AD&D where I grew up.

Wrathamon said:
Interesting two of those names are most likely women and the last one could also be a female gamer. Pretty interesting given the idea that women didn't game back then. I think that may occur after this time period as the game grew a larger and larger male audience. Thankfully, that stigma is dissolving away.

I still feel the two different D&D lines was a mistake and caused much confusion and segmentation. I think most AD&D players bought the boxsets but never played it. I was one of them. We only played AD&D where I grew up.

Yup, I'd say for sure Kristine Batey is. Just not sure on Robin Hostetter since Robin's a gender neutral name. Loren Wiseman of course is legendary for his work with FASA, GDW and I think Steve Jackson games, sadly he passed a few couple years ago. 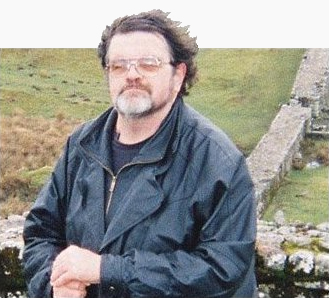 I think this was the first Dragon Mag I ever owned. I can't remember if I already owned Traveller and bought this for that reason; or if I found out about Traveller because of this magazine. Either way, I love the cover.