Dragon Publishing released Dragon issue 51 in July 1981. It is 100 pages long and has a cover price of $3.00. In this issue, we have rules for paladins, the winged folk race, and lots of Traveller! 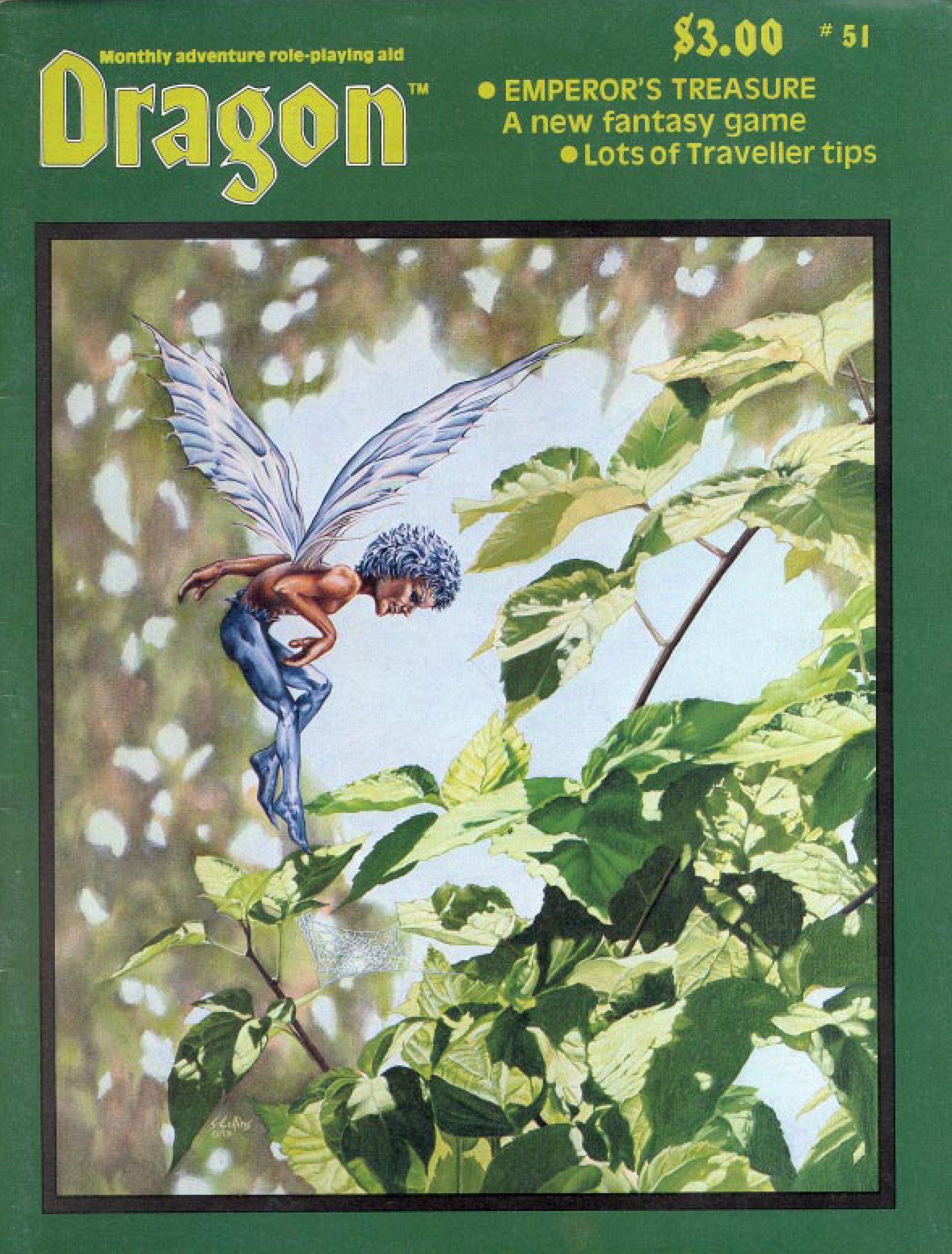 Editor Kim Mohan kicks off the issue with a sort of apology. Just after they finished putting together this month's magazine, they received the latest issue of The Space Gamer and discovered that it was also doing a big Traveller special. So Mohan wants to assure folks that Dragon Publishing isn't just copying its rivals! There are seven Traveller articles in all here, and we'll look at each one.

"Make your own aliens" by Roger E. Moore contains a stack of alien generation tables. They are good, though I would have liked a more extensive selection of special abilities. "Plotting a course for choosy players" by Jeff Swycaffer is a variant character generation system that gives players more choice over skill selection. Designer Marc Miller has a tongue-in-cheek article called "The Miller Milk Bottle," which describes the use of milk bottles in the Traveller universe. Finally, we have four pieces by Paul Montgomery Crabaugh. "New ideas for old ships" is a set of ship customization tables. "In defense of computers" justifies the high cost of computers in the game. "Planet parameters" gives additional stats for new planets. And finally, "Masers & Cameras" are two new fit-out options for your ship.

This month's special attraction is a Tom Wham game called Search for the Emperor's Treasure. The art is fun, and the game seems fondly remembered by many people. I like the game board as well!

We have a lot of other features in this packed issue. "The Winged Folk" by William Lenox presents a new demi-human race, and it is well-executed with lots of great detail. New playable races were rare in the pages of Dragon, perhaps because Gygax explicitly discouraged them. Lenox appears to have done little else in the field of RPGs.

"The Worshippers of Ratar" is a new cult for RuneQuest, written by Eric Robinson. Meanwhile, "A new breed of bug" by Ben Crowell provides an additional type of unit for Metagaming's Chitin.

"It's not easy being good" by Roger E. Moore and "Thou shalt play this way" by Robert J. Bezold are both articles prescribing limits around the behavior of paladins. I remember that these articles profoundly influenced my game when I first read them, especially Moore's contention that paladins would not associate with evil characters. It so happened that our lawful good paladin, Elric, was good pals with Zyx, the party's chaotic evil magic-user. I told the players something had to change, and Elric sadly got the chop. As we all know, paladins no longer need to be lawful good in the modern game!

The final feature, "A part of the game" by Darrell Schweitzer, is a piece of atmospheric, though rather ponderous, fiction. Schweitzer was (and is) a prolific author of speculative fiction.

On to the regular columns! Glen Rahman brings us another edition of "Minarian Legends," this time describing the story of Schardenzar, a young man who overcame many misfortunes to achieve immortal fame. And in "Leoumnd's Tiny Hut," Len Lakofka presents a flavorful system for zero-level characters; is this the first such system published for Dungeons & Dragons?

"The Electric Eye" by Mark Herro returns, this time with a survey asking what readers would like to see in future columns--surely not a good sign! Meanwhile, "The Rasmussen Files" presents a series of college courses and other training that Top Secret agents can undertake to increase their skills.

"Dragon's Bestiary" describes two new monsters for D&D. We have the troll-like Dark Dweller by Mark Cummings and the Piranha Bat by David Dougher. I wish they'd provided art for the latter!

"Dragon's Augury" reviews four science fiction games this month. First, Triplanetary by GDW is "marvellously well-conceived," while Traders & Gunboats, also by GDW, is "an interesting and useful supplement for Traveller." We also have Ley Sector by Judges Guild, which contains "imaginative encounter charts." Finally, Tethys and Fenris by FASA are "good candidates" for Traveller referees looking for new ship designs.

And that's a wrap! The highlight for me was Moore's article on paladins, which was also selected for Best of Dragon Vol 3. Next month, we have a Gamma World scenario, a feature on clerics, and the new D&D Basic Set!
Click to expand...

And we hit the first Dragon that I actually owned. These are great, thank you.

I love that cover so much.

One of the things I loved about the Dragon was its coverage of non TSR games. Traveller had its own mag (JTAS) but articles about it were always welcome. This was definitely a good issue in a string of good issues...

I had that Winged Folk article in a "Best of Dragon" collection - man everyone at one point or another wanted to play one.

Piranha bats ... Somehow I think my group might be wandering into a cave shortly!

Dioltach said:
Piranha bats ... Somehow I think my group might be wandering into a cave shortly!
Click to expand...

I feel bad I didn't put that idea in Creatures of Ravenloft. I may need to go back and add it.....

I used the Alien generation article to make Starfire races. Lots of fun.

I do kinda miss the days when Dragon wasn't just a D&D magazine. I learned a lot about other games in Dragon.

I loved the dark dwellers. They were basically trolls, but intelligent and with a strong metalworking craft. I think they're a good fit for a campaign where the PCs are having too easy a time of it, but unfortunately they don't have a lot of cultural details described -- an issue with many humanoids in the game.

This magazine was massively influential on me: The Winged Folk (and the possibility of having a flying PC) radically changed my campaign.

Liane the Wayfarer said:
I loved the dark dwellers. They were basically trolls, but intelligent and with a strong metalworking craft. I think they're a good fit for a campaign where the PCs are having too easy a time of it, but unfortunately they don't have a lot of cultural details described -- an issue with many humanoids in the game.
Click to expand...

Search for the Emperor's Treasure was one of Tom Wham's best games, along with King of the Tabletop. It was reprinted in the Best of the Dragon Games boxed set. Unfortunately, the reprint version replaced the original Darlene Pekul-drawn map with Catan-style rearrangeable hexes, which weren't nearly as good.

This came out in the summer between my 8th grade year and high school. This was right in the middle of my main Dragon Magazine buying years.

I absolutely loved the Traveler articles and it was these articles that prompted me to buy the box set for Traveler, my first non-D&D rpg game. The upcoming Exonidas Space Port in issue #59 is probably my best loved Dragon article. Can't wait for the recap of that issue.

Dioltach said:
Piranha bats ... Somehow I think my group might be wandering into a cave shortly!
Click to expand...

One of my favorite issues. I think I created a Winged Folk character for a campaign that never actually happened. I was already a fan of Traveller, so that set of articles was great to see.

Played SftET quite a few times. I recall after I separated the game out of the magazine, I misplaced the map & rules from the playing pieces. I kept finding one and forgetting where I had put the other. They were eventually reunited.

As for the version included in the Best of the Dragon Games (which I have also played many times), I remember that Tom Wham said that his original intent was for the map to be assembled like that, but it was too much to include in the magazine. But yeah, that was a beautiful map.