Dragonbane: An Interview with Tomas Härenstam

Dragonbane is a fantasy RPG filled with demons, dragons, goblins, and undead and the wizards, elves, and other fantasy heroes who face off against them. It is fast playing with brutal combat but also some laughs. Dragonbane is on Kickstarter now and a free Quickstart is available. Tomas Härenstam of Free League was kind enough to talk to me about this newly updated RPG. 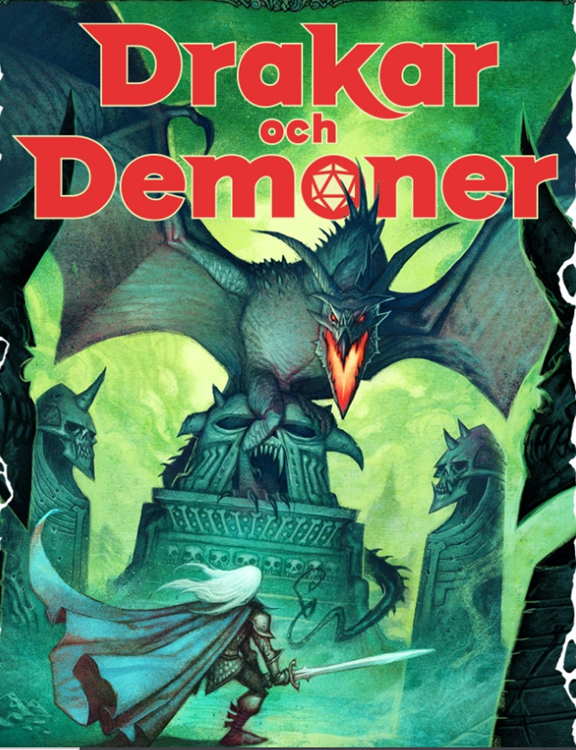 Charles Dunwoody (CD): Free League has several fantasy RPGs including The One Ring (and a forthcoming D&D version: The Lord of the Rings Roleplaying for 5E), Symbaroum (also with a D&D version: Ruins of Symbaroum), and Forbidden Lands. What prompted you to bring this game with an updated game engine back and now available to English speakers as well?
Tomas Härenstam(TH) : Drakar och Demoner is the classic RPG in Sweden, and originally we only intended to release it in Swedish. But after we announced the new edition about a year ago, we got plenty of interest from our international audience as well. And once we actually started working on the game design, we slowly started to feel that this game will be too good to just keep to the Swedish market. So we decided to add an English edition to the Kickstarter, just to see how it goes. And it went pretty well!

CD: For those unfamiliar with the game, what is the setting and base mechanics of play?
TH: Drakar och Demoner has always been a broad and fairly classical fantasy RPG - but with a twist of silliness at times, like talking ducks! We have decided to focus a little extra on that, making Dragonbane a game for good laughs at the table - but suspense as well, of course. Mechanically, Drakar och Demoner has its origins in the rulesets of early RuneQuest, and there are still some remnants of that in this game, 40 years later. It's a skill-based roll under system, but using a D20 instead of D100.

CD: Does Dragonbane support long term play as well as one shots? How long might campaigns run?
TH: The game is well suited for quick oneshots and convention play, but longer campaigns are certainly supported as well. The core set itself will include 8-9 adventures, connected into a longer campaign that can run for a dozen sessions or more.

CD: Dragonbane is described as mirth and mayhem. What does that mean in regards to the rules and setting?
TH: As mentioned before, there are some comical elements to the setting, like ducks and other anthropomorphic animals. The rules lean more toward the "mayhem" side of the tagline I think, designed for fast and brutal play that never bogs down. 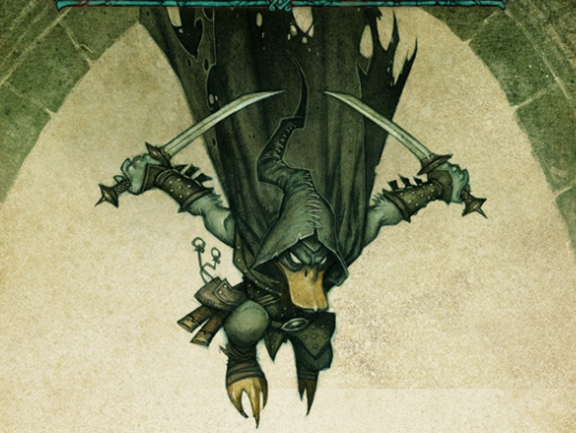 CD: Mallards (duck people with attitude) are an option to play and they have tempers. How do they fit into the setting?
TH: The mallards/ducks have been part of the Drakar och Demoner since the early 80s. They have at times been a divisive element, subject to intense debates. In the end, we strongly felt that the ducks are a part of what makes Drakar och Demoner/Dragonbane stand out among other fantasy RPGs.

CD: Monsters always hit in combat. I’ve never seen that mechanic in an RPG before. Why the decision to always have monsters hit and are new players surprised at how the rule works?
TH: There was some surprise at that, yes, especially among Swedish players familiar with earlier editions. The decision came from the overall design goal to make combat fast and dangerous - especially against monsters! We wanted to remove unnecessary dice rolls that just increase the "whiff factor". There is still enough randomness there, as monsters attack using a table of random attacks, never doing the same thing twice in a row.

CD: What are the three types of magic in the game and are there magic items?
TH: In the core game, there are three schools of magic - elementalism, animism, and mentalism. More might be added in later expansions. Yes, indeed there are magic items!

CD: What extras are offered in the kickstarter for Dragonbane?
TH: The only really Kickstarter exclusive item is the deluxe cloth map of the Misty Vale setting, painted by Francesca Baerald. It's a beauty!

CD: Where can fans go to find Free League’s work?
TH: Right now, the best place is the Kickstarter for Dragonbane! At other times, try freeleaguepublishing.com.

CD: Any final comments you’d like to share with the readers of EN World?
TH: Come join the Dragonbane campaign before it's too late! You won't regret it!
Last edited by a moderator: Sep 20, 2022
Click to expand...

I backed it, but I can't get past the ducks. Same with RuneQuest. But I also get that Donald Duck comics were big in Europe. I will likely replace them with goblins and move on.

The monster handling is definitely exciting. I am quite tired of the GM having to make a conscious choice on whether to kill players or not.

Could do with less reminding of the ducks.

I love the ducks. So angry. They quack me up.

I prefer the ducks as antagonists. Truly, the terror that flaps in the night.

There aren't many fantasy RPGs I'm running that if a player wanted to play Makander of Halfbay that I'd have an easy time saying no. He really does look like a PC I'd enjoy running. 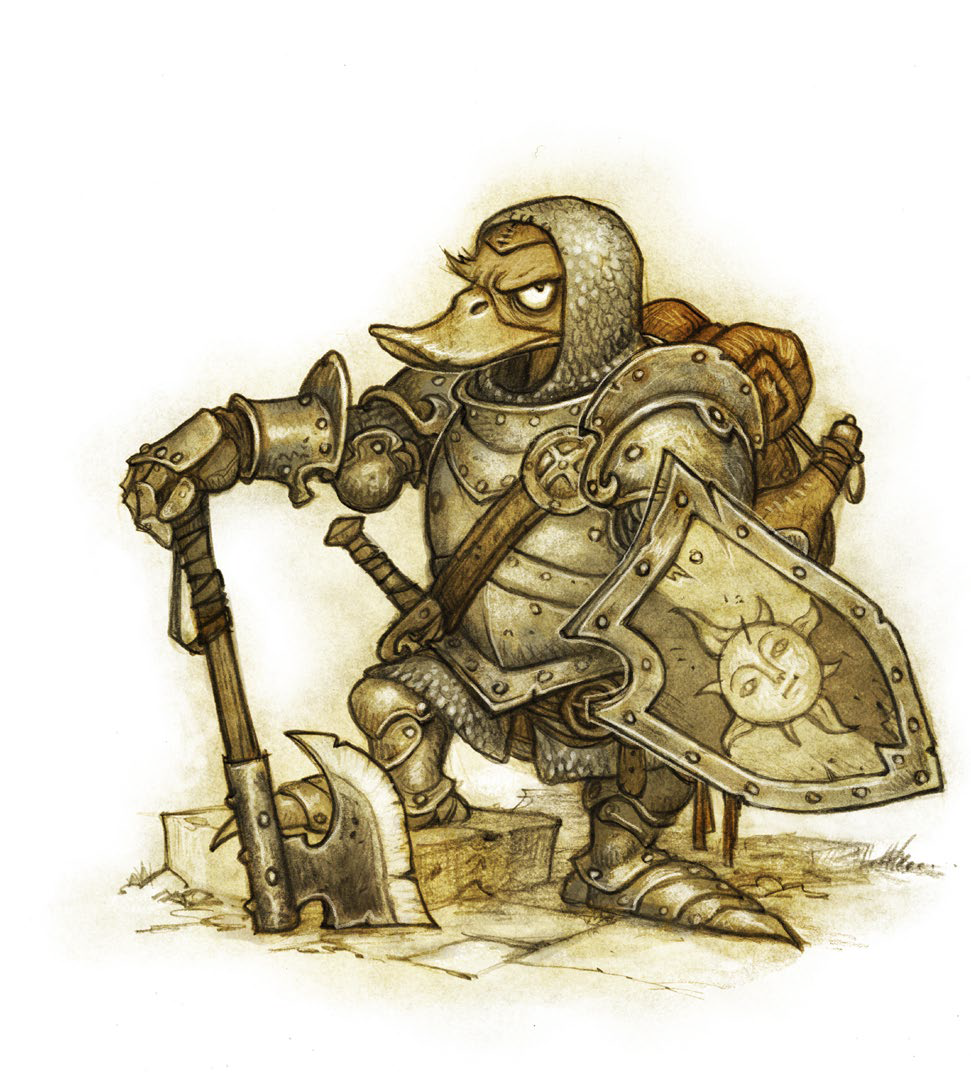 I was thinking about backing this, but then ducks. It's one of the reasons why I was never interested in RuneQuest.

For as long as I can remember, the ducks were a deal breaker with RQ, but the art in this kickstarter has changed my mind just enough to dive in!

I also such fond memories of Pendragon also that using a d20 for a d100 system roll under system.

Monsters always hit in combat. I’ve never seen that mechanic in an RPG before.
Click to expand...


I think I've seen an OSR variant or some other RPG use that mechanic. Again at the time, it didn't hook me, but in this game I am willing to give it a try.

Overall, I'm looking for lighter game to get up and running quickly for two different groups.
I just wish they offered extra core books as an Add-On so I could buy them for my first group.

stadi said:
I was thinking about backing this, but then ducks. It's one of the reasons why I was never interested in RuneQuest.
Click to expand...


I always liked Howard the Duck so ducks are not really a stretch for a me. And D&D has kenku so not really that different.

Backed it! Bring on the ducks! I only played one long running Runequest game and my character was a duck!

Charles Dunwoody said:
I love the ducks. So angry. They quack me up.
Click to expand...

That's horrible. I'm going to have to bill you for that.

Staffan said:
That's horrible. I'm going to have to bill you for that.
Click to expand...

Charles Dunwoody said:
I always liked Howard the Duck so ducks are not really a stretch for a me. And D&D has kenku so not really that different.
Click to expand...


YMMV, but those two species are not birds of a feather. In fact, a Kenku raven may just murder someone who flocks them in with mallards.

On that note, the whole 5e thing of kenku who can only talk in mimicked phrases like a Bumblebee transformer using the radio to communicate was a deal breaker for me.

Being a raven person is cool, and them having a mimic ability is cool. Having the mimic ability be the only way they can communicate, not so much.

Regardless, we've confirmed the game will include some travel rules, so it appears that utilizing all of the great Forbidden Lands content will be straightforward. e.g. finding a skill or sub ruleset or a critter that has a "close enough" match in both games. Between that and the included campaign that's a lot of content, inspiration, and opportunities to learn to design by example.

There are some things I would never attempt to convince someone to change. Their sexual orientation, their religion, their political party, and their position on playable ducks.

I can only share my own feelings on the subject.
I can say that while I was vaguely interested in this Kickstarter I immediately backed it when I found out about the ducks. I have always been a fan of Scrooge McDuck and Ducktales in general. Those comics have comic elements but most of them are flat out adventure stories.

Also I played console games. Suikoden III introduced me to a legend. 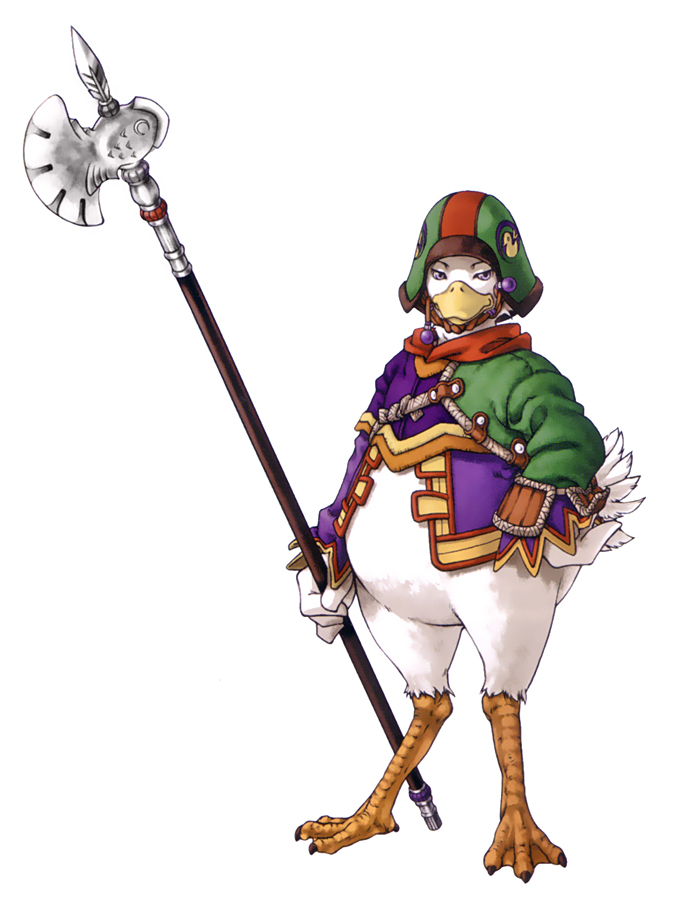 Sgt. Joe, also known as Sergeant Jordi, is the Tenko Star in Suikoden III. Sgt. Joe is a composed and a brave warrior from the Duck Clan. He has fought on many battlefields. By Duck standards, he's quite good looking. They say that girls are attracted to his eyes and tail. Sgt. Joe was once the...

A father, war hero, mentor. A god among ducks.
Many people make duck sauce jokes about playable ducks.
Do not speak such to Sgt. Joe. You will taste his halberd.

But let the pro-duck and anti-duck factions bury the hatchet. We can all roleplay in peace and understanding.
the Anti Playable Duck side can Reskin all of the ducks into goblins, halflings, or other similar things!

( And I will publish my 5ed compatible Funny Animal Cartoon World RPG and reskin Halflings into Ducks.)
Last edited: Sep 21, 2022

Charles Dunwoody said:
I always liked Howard the Duck so ducks are not really a stretch for a me. And D&D has kenku so not really that different.
Click to expand...


Marzipan said:
I can say that while I was vaguely interested in this Kickstarter I immediately backed it when I found out about the ducks. I have always been a fan of Scrooge McDuck and Ducktales in general. Those comics have comic elements but most of them are flat out adventure stories.
Click to expand...

I have to ask: are you European? I was in Lübeck a few months ago on vacation, and they are quite proud of their marzipan tradition.
Last edited: Sep 22, 2022

Woot! Blew through two surprise goals and we have even more adventures! Now I'm chomping at the bit for the Beta PDF.