We’ve launched our Dungeon Delver’s Guide kickstarter, and we’re honored by your support! A day after launch, we’re at over £60K. Soon we’ll have stretch goals to announce. But right now, let’s preview another section of the book: our three-page dungeons.

If you’re designing a dungeon adventure for your game, we’ve got you covered. If you’re creating one from scratch, we’ve got solid dungeon design theory, including the NODES system and the DICE description method. If you want tables for random dungeon creation or inspiration, we’ve got lots of those as well.

Some nights, though, you just want to take a premade dungeon and run the heck out of it.

Our three-page dungeons span character levels from 1 (the Rotten Underbelly) to 18 (Maze of the Mountain King), and range through eight distinct dungeon environments, from shrine to submarine. No matter what the level of your group, you’ll be able to challenge them with a suitable zero-prep adventure.

Each of the Dungeon Delver’s Guide dungeons makes full use of our adventure-building tools and advice. You can run one of these adventures with no prep, or dip into it to mine it for novelties, obstacles, discoveries, escalations, and set-pieces, along with the many new monsters, spells, treasures, traps, and puzzles scattered throughout the adventures. Special thanks to our super team of dungeon adventure writers: William Fischer, Cassandra Macdonald, Peter N Martin, and Brandes Stoddard for doing great work on the dungeons!


Palace of the Amber Prince​

I want to share one of our three-page dungeons with you: Palace of the Amber Prince by William Fischer. I like this adventure a lot: I love the sense of archaic creepiness that pervades the dungeon, I love the isometric style of the map, and I love that the climax of the adventure features not a combat encounter but a fiendish trap, the lightning blast statue, which is one of the more than 100 new traps in Dungeon Delver’s Guide.

Check out the Palace of the Amber Prince below, along with the lightning blast statue. 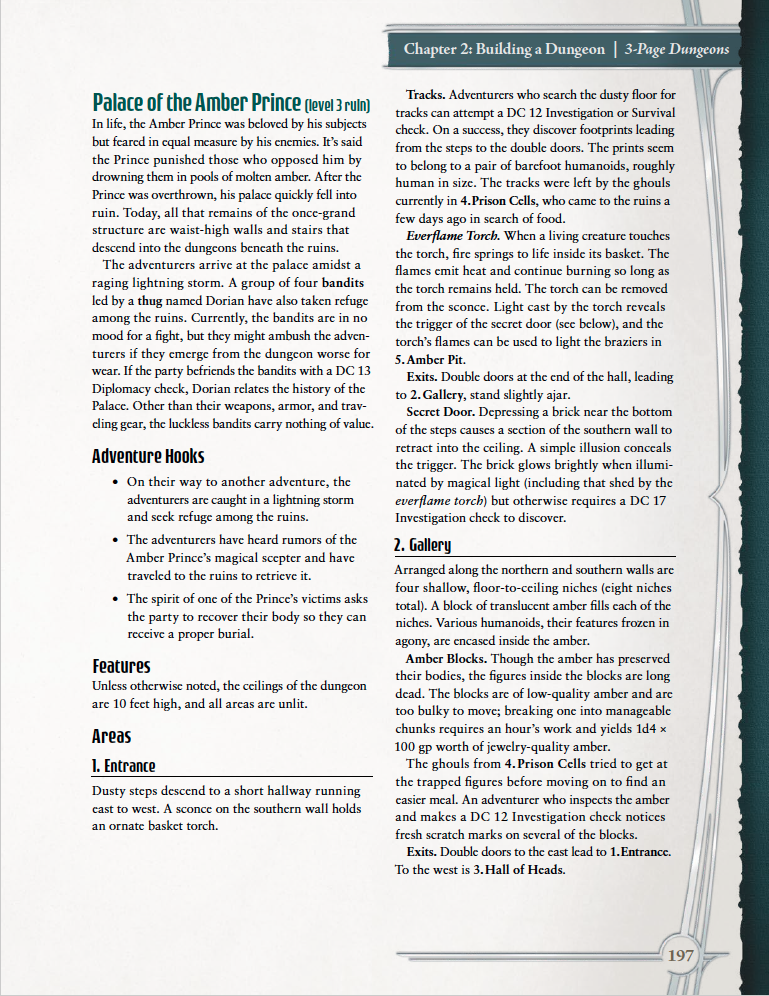 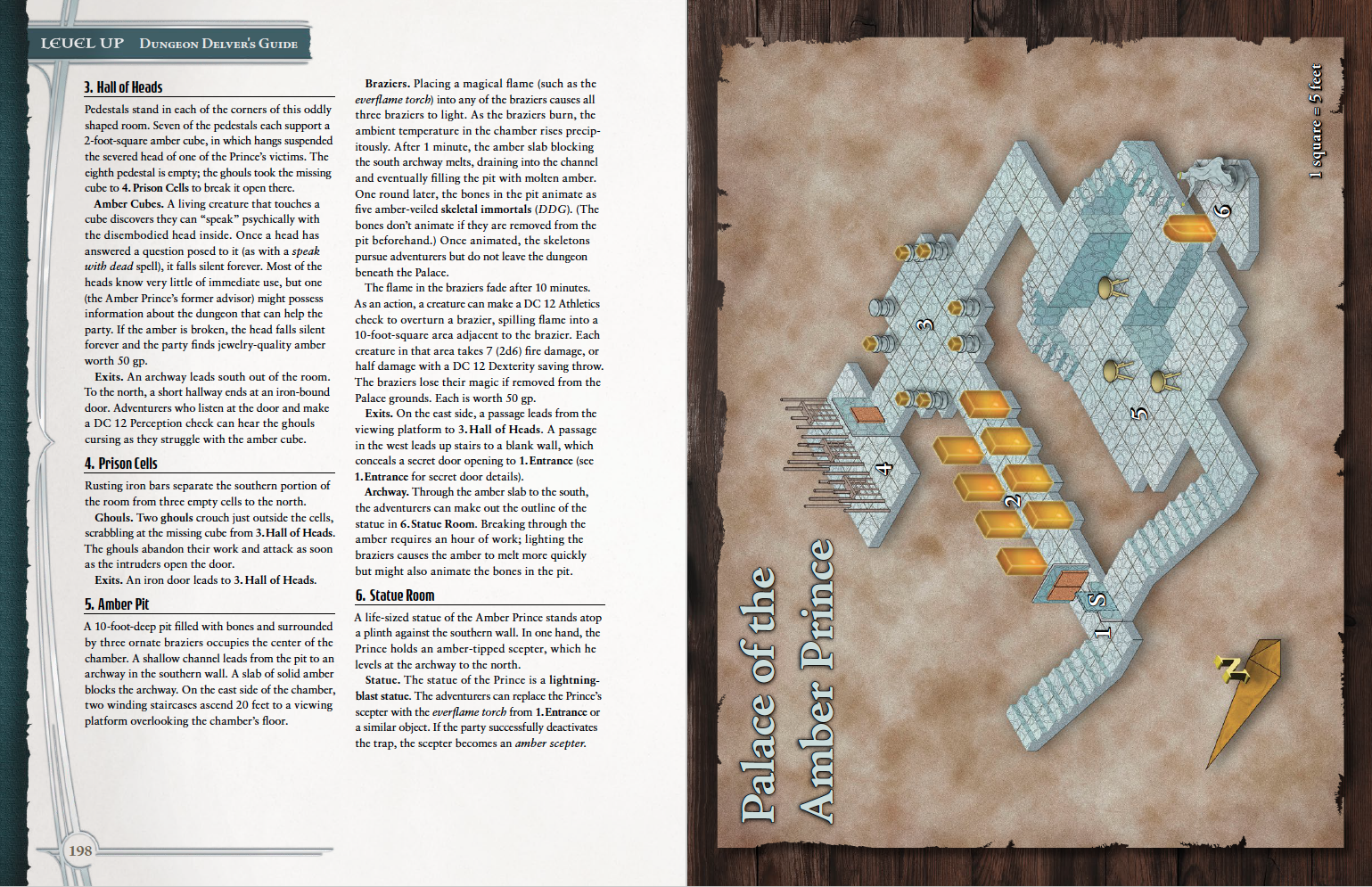 1st tier (constructed trap)
Challenge 3 (700 XP); DC 14/14
A life-size statue of a humanoid stands atop a squat marble plinth. In one hand, the statue holds an amber-tipped scepter leveled at the room’s entrance.

A creature that approaches within 10 feet of the statue’s scepter or starts its turn in that area triggers a Failure.

Scepter. A Perception check or an examination of the statue reveals that the scepter can be removed from the statue’s hand. A riddle is written in Common on the scepter: “I am the Prince’s to command / Until another comes to hand.”

Magical Effect. This is a magical effect created by evocation magic. Casting dispel magic on the scepter requires a spellcasting ability check and disables the trap.

Statue. A creature can push the statue off the plinth with an Athletics check. On a success, the statue shatters against the floor. The statue is a nonmagical object with AC 14, 50 hit points, and immunity to poison and psychic damage. While the statue holds the amber-tipped scepter, it also has immunity to lightning damage. Shattering the statue or reducing it to 0 hit points disables the trap.

To disable the trap, the statue’s scepter must be swapped with an object of similar size, such as a magical rod, a weapon, or even a torch. Simply removing the scepter from the statue does not deactivate the trap; the scepter continues firing so long as it remains within 500 feet of the statue. A creature can make a Sleight of Hand check to replace the scepter without activating the lightning. 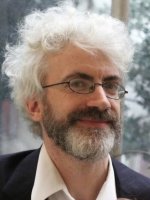 Paul Hughes reverse engineers and reassembles D&D rules at blogofholding.com. He's the lead designer on EN Publishing's Monstrous Menagerie and Dungeon Delver's Guide, and also tinkers with projects such as 5e Monster Manual on a Business Card and the Random Dungeon Generator as a Dungeon Map. He believes that any rule can be improved by running it through a simulator 100,000 times.

Very evocative little dungeon. I like the streaks of ghoul claws upon the amber blocks - nice touch! Thank you for sharing!

Am I misreading the Lighting Blast Statue trap, or is it easily resolved risk-free by casting the mage hand cantrip?

Any chance the maps will also be available in a more VTT-friendly method (non-isometric)?

Quickleaf said:
Very evocative little dungeon. I like the streaks of ghoul claws upon the amber blocks - nice touch! Thank you for sharing!

Am I misreading the Lighting Blast Statue trap, or is it easily resolved risk-free by casting the mage hand cantrip?

Removing the scepter doesn't solve the trap, though, and mage hand couldn't swap something out (you need 2 hands for the Indy trick). My question is how a slight of hand check can avoid effectively avoid a Failure when just being within 10 feet of the statue automatically gets it blasting.