Perhaps this issue of EN5ider is not for you—it's for the finest of adventurers with the most refined tastes, champions that regularly rub elbows with kings and queens. Should you aspire to such lofty heights however, maybe you have scraped enough coin to peruse it. If so we assure you that you will be overwhelmingly pleased with the truly couth item you choose! 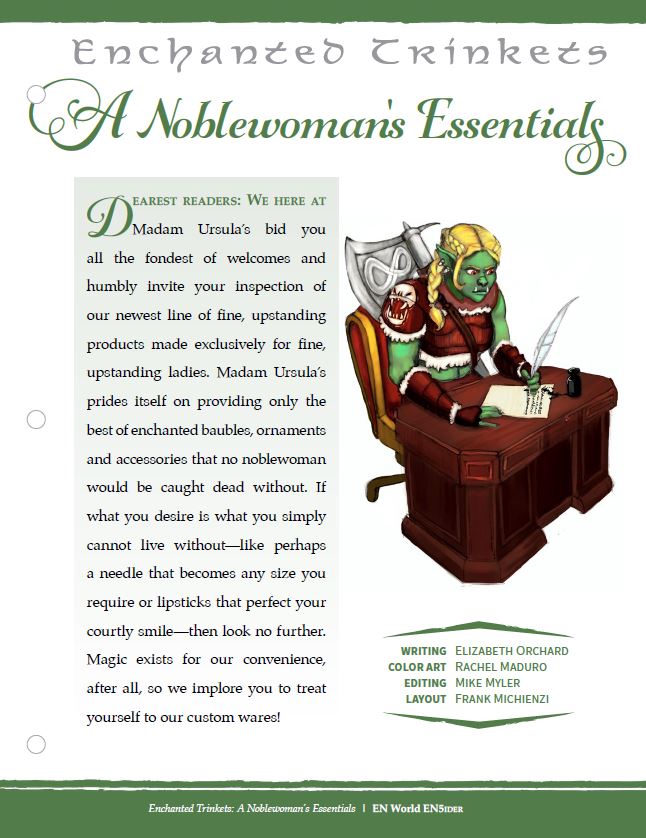 Free Articles including a complete adventure, a sidequest adventure, and the smart-fighting savant character class!
⚔ Join EN5ider for Immediate Archival Access: Pay $1 per new article we publish (5 per month—so $5 a month) to become a member and get instant access to the library of 340+ articles at no extra charge!

Mike Myler is a freelancing RPG goblin (or goblin that freelances for RPGs?), regent, the editor for the excellent EN5ider Patreon, and the Project Manager for Level Up: Advanced Fifth Edition. You can also find his marks in the N.O.W. book for the What's Old Is New RPG and on www.mikemyler.com⁠ (which has the neatest collection of free content around as well as links to his 6 hardcover campaign settings). Definitely not up to anything sinister this year.
T

Nice intro. This reminds me of the back of a bottle of arrogant b*****d ale.


Nice intro. This reminds me of the back of a bottle of arrogant b*****d ale.

I so dearly wish Arrogant Bastard Ale tasted better but I gotta say their marketing is on point.