Epic Monsters is ready to impale you with fun today thanks to the escornáu! 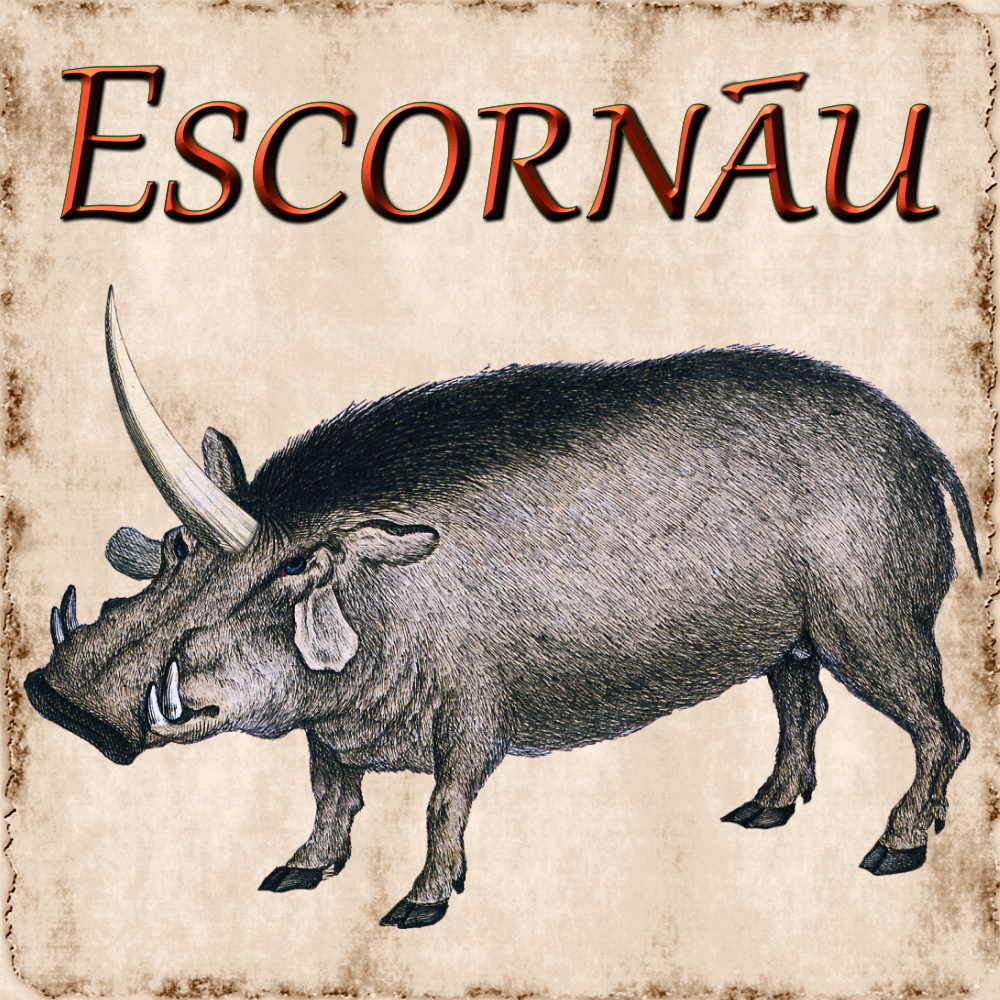 Also known as the ehcornáu or escornai, the escornáu hails from the 1500s in the village of Ahigal in Cáceres (Extremadura, Spain). The legend goes that it was sent by God to punish people for their sins, although there are several different ways it might have been brought into the mortal realm: by a sow and stallion, a boar and mare, cow and stallion, bull and mare, or a bored sheepherder. In any event it was said to be part horse, part bull, and part boar, most importantly with that big old horn (or in the sheepherder case, a scaly boar with the horn). This was a vicious creature that loved goring people to death—ladies in particular, who would then be carried about—and though it wasn’t against eating human flesh it preferred riverside pigeons. Like the kongamato the escornáu has a prehistoric ancestor (a horned boar called the kubanochoerus), and other myths about it claim it had exceptional senses and that it “always slept with one eye open”.

Impervious to arrows and bullets, the people of Ahigal instead turned to faith to deal with the escornáu. The second attempt to quell it with the power of prayer succeeded (the Order of the True Cross were slaughtered, the Order of the Rosary survived) first paralyzing the beast and then making it explode upon a hill turned red with its blood, rechristened Canchu la sangri. Its horn became a treasured relic famous for its healing properties for female sterility, insomnia, stomach pain, nervousness, and growth, and as a token of good luck—until in the late 1800s the Bishop of Coria found out about the faith bestowed into it instead of christianity, taking it away to parts unknown.

Design Notes: To begin with we’re going to start with dire boar but make it a monstrosity to avoid druid shenanigans, and also a smidge stronger. As for alignment it seems like there’s no option but neutral evil; parading around dead people as trophies on your face is definitely evil. Obviously it’s getting immunity to weapon damage, and also fire resistance and poison immunities because those seem like tactics a terrified village probably tried, and cold resistance too (both because it means no rays of frost so more emphasis on melee cantrips when fighting it, and because this thing should probably be able to tool around in the winter doing its job). On top of that we’re going to give the escornáu Regeneration with a radiant weakness—that covers a lot of the ancillary bases and makes it extremely durable, at least tough enough to give spellcasting adventurers pause. Throw in proficiency with Intelligence saving throws for a bit of illusion proofing. So how does it die? That weakness to faith! We’ll define it, make sure it’s something within reach of villagers, and then give it some structure and functionality at a distance that should keep things interesting. It’s still possible to kill it with other things, but it’ll be a slog. Finish everything by putting on that big old horn, including a bit about impaling folks. Let’s do the numbers! The DMG skirted in just barely past 6 and the Blog of Holding at 5.666, averaging out to make the escornáu a beefy CR 5 that should prove to be an exciting encounter for most parties (good luck to any group totally bereft of divine spellcasters though as they are in for quite a long fight).

Charge. If the escornáu moves at least 20 feet straight toward a target and then hits it with a horn attack on the same turn, the target takes an extra 9 (2d8) piercing damage. If the target is a creature, it must succeed on a DC 15 Strength saving throw or be knocked prone.

Relentless (1/Short Rest). If the escornáu takes 10 damage or less that would reduce it to 0 hit points, it is reduced to 1 hit point instead.

Disclaimer: No farmer from Extremadura was hurt during the playtest of this creature. Instead those a group of kenders from Absalon were used as volunteers.

seems like a cleric or paladin turning it should also inflict one or more levels of suffering.

Davinshe said:
seems like a cleric or paladin turning it should also inflict one or more levels of suffering.
Click to expand...

Nice one man. Spanish monsters never get enough love. The religious thing really fits--they were very Catholic over there in the Middle Ages. (And afterward for a while.)