Epic Monsters has the firstborn of Cthulhu for today, a being so mind-bendingly hideous that even gazing upon its true form can mummify: Ghatanathoa! 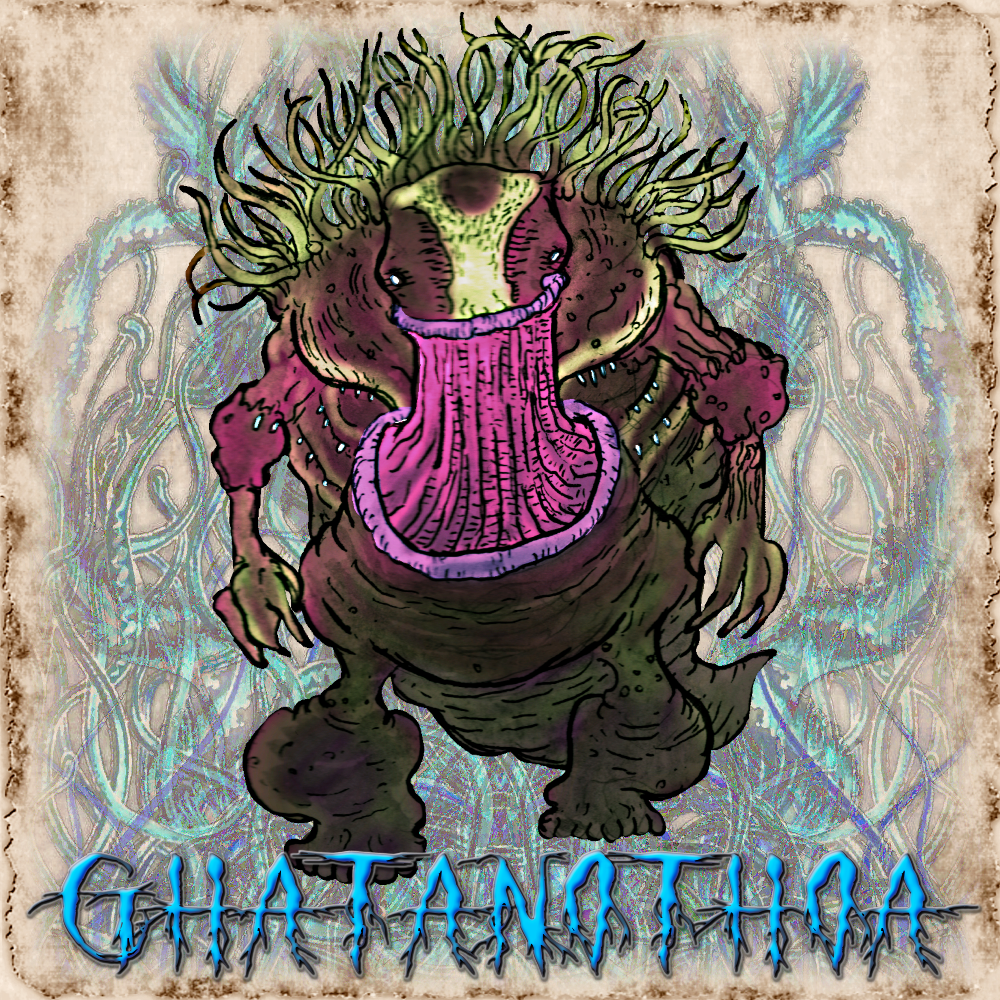 It's been a while since the last one of these Cthulhu-related posts, but to illustrate the kind of washboard lore we’re dealing with in the realm of Lovecraft I’m sharing a short excerpt from the Wikipedia page for Ghatanothoa:
Ghatanothoa is currently trapped underneath Mount Yaddith-Gho in the sunken continent of Mu. He was brought to Earth from the planet Yuggoth (Pluto in Lovecraft's fiction) by an ancient, alien race. These are presumed to be the Mi-go, or Fungi from Yuggoth (Harms, The Encyclopedia Cthulhiana p. 115), but S. T. Joshi, in his essay "Lovecraft's Other Planets", argues that these beings are an older and perhaps indigenous race of Yuggoth. Citing Lovecraft's "The Whisperer in Darkness" (1931), Joshi notes that the structures on Yuggoth were "built by some elder race, extinct and forgotten" before the Mi-go arrived; wherefore, the aliens here are "the alien spawn of the dark planet Yuggoth" (as quoted from "Out of the Aeons") that brought Ghatanothoa to Earth. (Joshi, "Lovecraft's Other Planets", Selected Papers on Lovecraft, p. 39.), who built a colossal fortress atop Yaddith-Gho and sealed Ghatanothoa inside the mountain.​
Design Notes: Aside from the conversion and illustration restrictions I tried to keep Ghatanothoa a lot like Cthulhu as far as the statblock’s skeleton is concerned (with slightly lower stats). As with Dagon’s statblock the illustration is guiding some of the design choices below, altering as necessary from a build done in Pathfinder Adventure Path #114: Black Stars Beckon (Strange Aeons), but as always I’m keen to hear what Lovecraft experts think needs to be improved upon!*

*In the Epic Monsters series only the Lovecraftian gods actually physically manifesting themselves on the planet Earth get legendary actions (which is to say Nyarlathotep). If encountered in their homes, they do not have killable stats (or if they do, their CRs exceed those being considered in this column).

Apocalyptic Dreams. Ghatanothoa can affect a creature with apocalyptic dreams if it has been subjected to his unspeakable presence (even if the creature successfully saved against that effect), has been harmed by a natural disaster created by a magical effect (such as an earthquake or storm of vengeance spell), or has ever offered a prayer to Ghatanothoa. When Ghatanothoa uses Nightmare Haunting on such a target, the victim has a vivid dream of experiencing the end of the world in a fiery, destructive apocalypse—be it from asteroid impact, devastating floods, volcanic eruption, or anything else at the GM’s discretion. Upon waking, the conviction that such an apocalypse is only days, if not hours, away haunts the victim. In addition to suffering the normal effects of the Nightmare Haunting, the victim must succeed at a DC 25 Wisdom saving throw or be hopeless for 24 hours, making all saving throws with disadvantage.

Immortality. If Ghatanothoa is killed, its form and all perfect images of its likeness lose Transformative Presence. Ghatanothoa’s body shrivels and compresses in on itself, growing hard and leathery as it mummifies and contracts in size to a Huge object with AC 24 and 200 hit points. These remains are immune to cold damage, have fire and electricity resistance, and vulnerability to acid. An earthquake manifests (as per the spell) each round thereafter, centered on the location where Ghatanothoa was slain (its remains never take damage from the effects of these earthquakes). If Ghatanothoa’s remains are not destroyed within 1 minute of its death, they explode in a 600-foot radius blast of energy that deals 70 (20d6) necrotic damage to all creatures. Creatures in the area that make a DC 25 Dexterity saving throw reduce this damage by half. A creature killed by this damage is immediately transformed into a mummy. If the remains are destroyed before this occurs, they crumble to dust without exploding. In either case, as soon as the remains are destroyed or explode, the earthquake effect in the region ends and Ghatanothoa is reborn from one of the hidden cysts deep within his island lair underneath Mount Yaddith-Gho in the sunken continent of Mu. If its remains were destroyed before they could explode, Ghatanothoa stays dormant in its lair until outside influences awake it once again (this could be a complex ritual performed by cultists, an astronomical event, or any natural disaster that strikes the region). If its remains were allowed to explode, Ghatanothoa wakes immediately and its Transformative Presence trait once again functions as detailed below.

​
Insanity. Any creature that attempts to interact directly with Ghatanothoa’s thoughts (such as via detect thoughts or telepathy) must succeed at DC 25 Wisdom saving throw or gain an long-term madness. When using its telepathy to communicate Ghatanothoa doesn't activate this feature unless it spends an action to focus its mind on one opponent.

Legendary Resistance (3/Day). If Ghatanothoa fails a saving throw, it can choose to succeed instead.

Magic Resistance. Ghatanothoa has advantage on saving throws against spells and other magical effects.

Mummy Master. Instead of dealing damage against a creature that has mummified fully as a result of Ghatanothoa’s Transformative Presence, it can choose transform that creature into a mummy under its control (no save).


ACTIONS
Multiattack. Ghatanothoa can use its Transformative Presence. It then makes six attacks: two with its bite, two with its claws, and two with its tentacles.

Bite. Melee Weapon Attack: +15 to hit, reach 5 ft., one target. Hit: 25 (4d8+7) piercing damage. If the target is a creature it is grappled (escape DC 23). Until this grapple ends, Ghatanothoa can't use the tentacle to grapple another target. Ghatanothoa can use a bonus action on its turn to Swallow a target grappled in its mouth.

Claw. Melee Weapon Attack: +15 to hit, reach 5 ft., one target. Hit: 21 (4d6+7) slashing damage. If the target is a creature it is grappled (escape DC 23). Until this grapple ends, Ghatanothoa can't use the claw to grapple another target.

Tentacle. Melee Weapon Attack: +15 to hit, reach 5 ft., one target. Hit: 21 (4d6+7) bludgeoning damage. If the target is a creature it is grappled (escape DC 23). Until this grapple ends, the creature is restrained, and the Ghatanothoa can't use the tentacle to grapple another target.

Swallow. Ghatanothoa makes one bite attack against a Huge or smaller creature it is grappling. If the attack hits, that creature takes the bite's damage and is swallowed, and the grapple ends. While swallowed, the creature is blinded and restrained, it has total cover against attacks and other effects outside Ghatanothoa. At the start of each of Ghatanothoa’s turns the swallowed creature makes a DC 25 Wisdom saving throw. On a failure, it is transformed into a mummy that Ghatanothoa can use a bonus action to disgorge into an adjacent square. The transformed creature is under Ghatanothoa’s control (as dominate monster but without the need for concentration). The transformation can be reversed by casting heal or regenerate within the first 24 hours.
If Ghatanothoa takes 30 damage or more on a single turn from a creature inside it, Ghatanothoa must succeed on a DC 15 Constitution saving throw at the end of that turn or regurgitate all swallowed creatures, which fall prone in a space within 10 feet of Ghatanothoa. If Ghatanothoa dies, a swallowed creature is no longer restrained by it and can escape from the corpse using 15 feet of movement, exiting prone.

Transformative Presence. Each creature of Ghatanothoa’s choice within 300 feet of it and aware of it must succeed on a DC 25 Wisdom saving throw or be horrifically cursed. Ghatanothoa’s presence is so potent that even perfect images of the Great Old One can have this effect—a “perfect image” can either be a project image created by Ghatanothoa, a perfectly rendered statue or painting (this requires an expenditure of 100,000 gp in resources, a successful DC 25 Intelligence [artisan’s tools] check, and a wish by someone who has suffered from Ghatanothoa’s Transformative Presence), or any other representation at the GM’s discretion. Creatures have advantage on saving throws to resist this trait from a “perfect image”.
If a creature fails to resist this curse, it immediately takes takes a cumulative -1d4 penalty to Dexterity at the start of each of its turns as its body begins to swiftly mummify. If the creature averts its gaze from Ghatanothoa, this drain is reduced to -1. As soon as a creature’s Dexterity score is reduced to 0, it transforms into a perfectly preserved and completely immobile mummy, yet the victim does not die. A creature mummified in this way no longer needs to eat, drink, or breathe, and no longer ages. It is essentially immortal, and can observe the world around it (and may even take purely mental actions, including the use of magic that doesn’t require components), but can take no other actions. No magical effect can end this condition save for an effect that removes the curse. Once restored, a creature that was mummified reduces its penalty to Dexterity by 1d4 at the end of each long rest.