Epic Monsters continues with the most enigmatic of the Great Old Ones, the strange entity wrapped in mystery and tattered yellow robes: Hastur! Epic Monsters is part of our weekly Mythological Figures column. 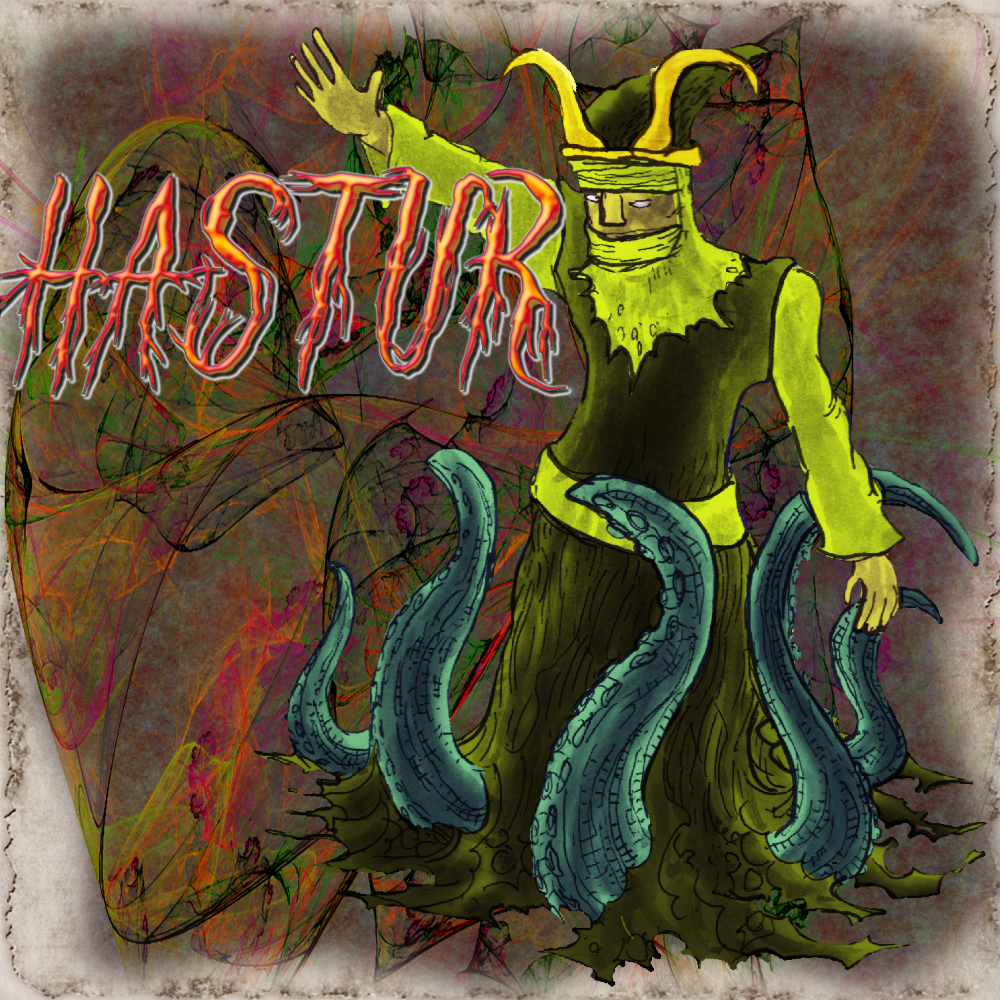 From what I can tell nobody’s entirely certain what’s up with Hastur and The Yellow King. Is the Yellow King Hastur? Is it only an avatar to partake of the physical world? These are questions beyond my ken and so I’m deferring to the good golems at Paizo and their writeup for The Yellow King in Pathfinder Roleplaying Game: Bestiary 4.

Damage Immunities cold, thunder; bludgeoning, piercing, and slashing from nonmagical weapons not made from adamantine

Fulvous Dreams. When Hastur uses Nightmare Haunting on a target that has seen the Yellow Sign, it also inflicts horrifying dreams tinted with a nauseating yellow color and thick with overwhelming sensations of decadence, shame, and entropic disorder. The target makes a DC 27 Wisdom saving throw or is compelled to seek out a Yellow Sign, throwing all of its resources and actions into the obsession. While obsessed, the target has disadvantage on Wisdom saving throws, saving throws against symbol, Constitution saving throws to maintain concentration on a spell, and Wisdom ability checks. This obsession effect ends immediately when the target looks upon the Yellow Sign.

Immortality. When Hastur is slain the robes that drape its frame suddenly drop to the ground as if whatever shape supported them had suddenly ceased to exist. The robes themselves remain inanimate on the ground, but any humanoid creature that touches them must succeed at a DC 27 Wisdom saving throw to resist a sudden urge to put the robes on. Doing so is requires an action and bonus action, and provokes opportunity attacks. Once it has donned Hastur's robes, the creature immediately perishes and its body is destroyed. In its place, Hastur lives again, as if brought back via resurrection. If the discarded robes are not donned within 24 hours they fade away leaving behind a faint yellow stain, and Hastur can't manifest a physical body again until the conditions are right.

Legendary Resistance (3/Day). If Hastur fails a saving throw, it can choose to succeed instead.

Magic Resistance. Hastur has advantage on saving throws against spells and other magical effects.

Regeneration. Hastur regains 20 hit points at the start of its turn if it has at least 1 hit point. Hastur dies only if it starts its turn with 0 hit points.

Reveal Visage. Hastur can use a bonus action to reveal the true shape beneath its robes to one adjacent creature able to see Hastur. The creature makes a DC 27 Wisdom saving throw or is paralyzed for 1d4 rounds and temporarily reduces its Wisdom by 1 at the end of its turn each round the paralysis lasts, though the revelation is too awful for memory to retain. A creature regains its Wisdom by 1 point at the end of a short rest or 1d4 points at the end of a long rest.

Wish. Although Hastur may innately cast the wish spell at will, it can do so only to grant the wishes of other creatures, and only once per creature. Invariably, the results of these wishes serve somehow to advance Hastur's agenda.

Yellow Sign (1/Day). On its turn, Hastur can touch any solid surface and inscribe the Yellow Sign upon it. Once inscribed, the Yellow Sign remains for a year, but is active only on certain nights when the light from Hastur's distant world shines in the night sky as a star. When a creature looks upon an active Yellow Sign, it makes a DC 27 Wisdom saving throw or becomes dominated by Hastur (as dominate monster but without the need for Hastur to concentrate); whether or not the save is successful, the creature is immune to that Yellow Sign for 24 hours. While the creature is under this domination effect, if the creature is killed primarily with magic or breathed its last just before death by spell, it immediately dies and allows Hastur to manifest physically at the location of its corpse, as if the victim had donned Hastur's tattered robes (see Immortality). A Yellow Sign can be removed with dispel magic.
​
ACTIONS

Shredded Robe. Melee Weapon Attack: +17 to hit, reach 30 ft., one target. Hit: 24 (3d10+8) slashing damage. If the target is a creature other than an undead or a construct, it must succeed on a DC 27 Constitution saving throw or lose 3 (1d6) hit points at the start of each of its turns due to an unnatural wound. Each time Hastur hits the wounded target with this attack, the damage dealt by the wound increases by 3 (1d6). Any creature can take an action to stanch the wound with a successful DC 27 Wisdom (Medicine) check. The wound also closes if the target receives magical healing.

Design Notes: Originally I thought The Yellow King was going to be simpler but it ended up bigger than Cthulhu! As lovable as the big-tentacle-mouthed chief Great Old One is though, Hastur is far more table- and plot-friendly than its bigger counterpart.

Now I wonder about the stats for Hasuta, character from manganime "Haiyore Nyaruko-san".

Yellow King, huh? Do we know if there's any relation to Gogo? Thank you for another wonderful entry! I am not a big Hastur fan and don't know how it fits with its lore, but I think this is a really interesting stat block with some fun mechanics. One thing that I think it is missing, something WotC started addressing in MToF, is high CR threats need a lot of mobility to fight high level parties. I would suggest some legendary actions and with that some type of legendary movement or bonus action movement action.