Officers sacrifice us to unlock the powerful Whispers of otherworldly Things from beyond the torn Veil. We’re all at constant risk of Corruption. I have managed to escape so far, but soon there will be no one left. Tell Mother I’m sorry. I’m never going home. 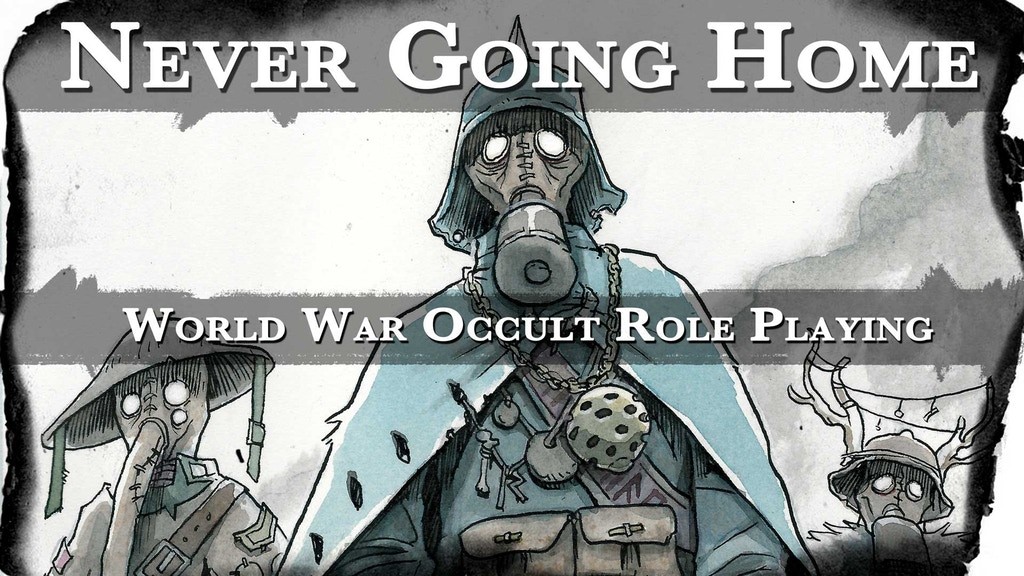 ​
Never Going Home (PDF and print can be requested from Wet Ink Games on Facebook) is a unit focused role-playing game set in horror haunted trenches during the First World War. Each player plays a soldier caught up not only in war but also in supernatural horror. The book uses old style fonts and a parchment look that resembles old mission briefings, diary entries from soldiers slowly seeing their hopes of returning home get torn away, and amazing art of gas mask wearing soldiers in scenes of supernatural horror.

Characters are created simply with attributes and skills getting picked and cards being drawn. The cards represent starting mental and emotional resources and can be spent right away to build the character or retained for use during game play. Cards determine initiative, help the unit on their journey to complete their mission, and help with rerolls and using magic. In a twist, skills provide dice to roll to try to succeed while attributes are used with each roll to manipulate that roll in various ways.

Characters aren’t assigned a nationality, a rank, or even a name. These details are left up to the group to determine as needed. Instead, a well detailed history of the conflict and information on the various armies involved provide context and background. The PCs are meant to be detached from their previous life and slowly losing bits of themselves to survive.

My players tested the game, playing Cossack solders facing Germans on the Eastern Front near the village of Tannenberg. Combat was harsh and brutal, with the horrific elements only heightening the already high and constant danger from war.

The combination of simple character rules, sparse background, and cards being discarded as if pieces of a person’s past are being spent like currency really captures both the terror of war and the creeping otherworldly horror that not only stalks the battlefield but also infects the rear echelon command and supply. Imagine not only facing enemies across No Man’s Land but also being threatened by officers in the rear. You really have no way to defend yourself, few resources of your own to fall back on, and no real belief that you’ll be making it home because the very people meant to get you back may instead sacrifice you to gain power from cosmic horrors. 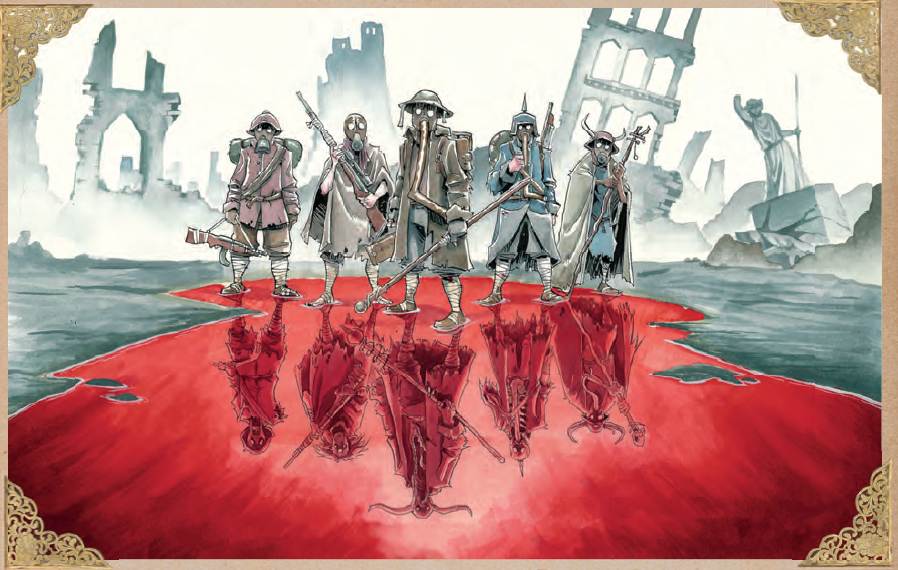 The gamemaster or narrator is given a variety of tools to run Never Coming Home. The world is falling apart, every day brings a new hell, and the PCs are never going home. What the PCs experience is a slowly unfolding series of missions overcome and the occasional unbelievable survial story coming through. They fight back against impossible overwhelming odds and despite the fear and horror there are thrills as well even if the day ends in death.

Sessions revolve around one hour missions. The unit must complete a journey of some sort to get to the mission proper and earn a mechanical bonus. If the right cards are played, the journey is a success. Failure to have the required cards provides a mechanical set back to the PCs. Corrupted PCs give more cards to the GM who can use them to foil completing a journey successfully as those losing their humanity subtly sabotage events. Corruption is assigned by the GM and tracked in secret. It may eventually destroy a PC completely.

Antagonists can be solo foes or a gathered mob. Some can use magic, called Whispers. Some antagonists are enemy soldiers of various ability while others are supernatural threats like demons, ghouls, and fallen soldiers called the Disfigured.

The GM section ends with three sample missions. While these are interesting, I used the one-shot Terror in Tannenburg from the supplement Once More Unto the Breach to test out the game. It takes place before the major tear in the Veil and introduces players to the game more slowly.

Never Going Home combines the dread and despair of the battlefield with otherworldly horror and betrayal. The PCs are cut off from any hope of aid, they don’t know who they can trust, and real monsters stalk the battlefield. If facing overwhelming odds and unending horror to prove your mettle appeals, you too may enjoy experiencing Never Going Home.

World War One is one of those untapped resources in rpgs that lends itself to this kind of game. Sounds like an interesting way to spend an afternoon.

I'm glad this got a write up. Kickstarted and really enjoyed how it was put together. A good example of mechanics supporting atmosphere.

WWI trench warfare was horrid enough, but to really make it resonate you need something extra at the table. This game does that in spades.

I'm a fan of the game; I reviewed it on d20 Radio. From that point of view, I enjoyed reading your take on the game. You did a great job sharing what makes Never Going Home an excellent addition to any gaming table. Fantastic review, Charles!