Staff member
[h=3]Notes on Stellar Cartography[/h]
There are about a dozen different versions of the Star Trek galaxy. The FASA RPG differs from various published Trek TV and movie map books, which differ from the Star Trek Online game, which differs from info displayed onscreen in TV episodes and movies... none of which is consistent. I've gone with a reasonable combination here that makes sense, but you will find other sources which show things differently. Don't worry about it; it'll never all agree and there's nothing "official" which is consistent with anything else "official". Just go with what works for you.
[h=3]Travel & Warp Speeds[/h]
Warp speed was recalibrated to a 1-10 scale (with 10 being infinite speed) between TOS and TNG. This document uses the older TOS scale which has no upper limit. Note that speeds above Warp 10 on this scale are known as “transwarp speeds”; during the TOS era, only the USS Excelsior possesses an experimental transwarp drive. These become much more common later.

1 parsec = 3.26 light years = 1 hex
​
This turns out to make Warp 7 very close to 1 day per light year, making it standard travel speed for long-range journeys. With local variations and other factors taken into account, it's safe to say that Warp 7 is 1 day per light year.
On the main galactic map, 1 hex is one parsec. Therefore travel from Earth to Vulcan (4 hexes) takes 3.47 days at Warp 7. See this article on the size of the Federation; this page supports the "small Federation" theory of a few hundred light years diameter. 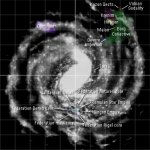 ​
[h=3]Map Without Hexes[/h]
This is the base map I've decided to treat as generally accurate. It's this map we'll be editing and playing with.

​
[h=4]Sol System[/h]
Sol (Earth, Terra) is where Starfleet HQ is based. According to Star Trek: Star Charts (Pg. 19), although the Sol system is located in the exact corner of the sector and was thus divided equally among all eight sectors, it is considered to be in Sector 001 for purposes of celestial navigation. Similarity, while the Sol system is divided equally between the Alpha and Beta Quadrants, it is considered to be part of the Alpha Quadrant.
[h=3]Klingon Empire[/h]

​
[h=3]The Triangle[/h]
Note that The Triangle must be forcibly inserted into non-FASA maps. The first is the original Triangle map from FASA's sourcebook; the second is the colourized version with nearby stars and nebulas added from the larger map to place The Triangle in context, plus the addition of Nimbus III ("Paradise City") from Star Trek V. Note the proximity also to Khitomer from Star Trek VI.

D&D 5E The Mechanics of A Fantasy Space Opera
2