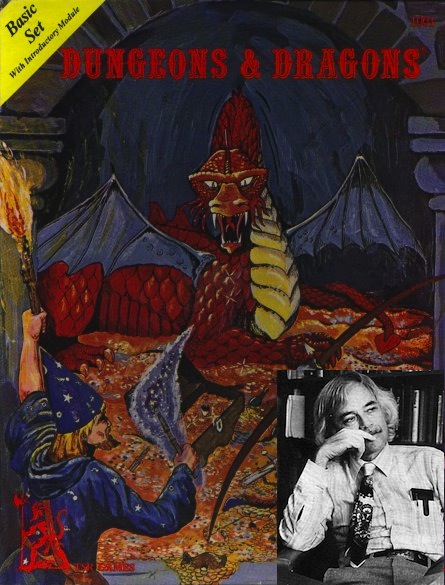 This past Sunday was the 90th (!) anniversary of the birth of J. Eric Holmes, editor of and content contributor to the first Dungeons & Dragons Basic Set, published by TSR in 1977. Many D&D players who started playing between 1977-1982 or so started with this Basic Set, including myself.

Holmes started playing D&D with his sons around 1975, edited the Basic Set rulebook for TSR in 1977, published a introductory book on RPGs in 1981, and published a D&D novel (the Maze of Peril) in 1986, which was his last major publication related to RPGs. He passed away in 2010 at the age of 80, so it has been almost a decade since we lost him. In 2017 a collection of his D&D fiction, including the Maze of Peril and short stories that had appeared in Dragon Magazine, was published by Black Blade publishing; I contributed an annotated bibliography of his work to this.

Holmes Basic Testimonials posted to the Zenopus Archives from previous years can be read here. Feel free to leave a new one there, or here in this thread.

I'm running several Holmes Basic/OD&D games at upcoming cons (Scrum Con II, Gary Con XII) as part of my ongoing tribute to Holmes. You can read more about my Holmes-related activities over the past year here.

Who else here started with Holmes Basic?

My friend and I split the cost for this book. We had real problems figuring out how to play, and didn't know anybody who could teach us. We bought it at Toys and Wheels. I ended up with the copy permanently, and still have it in my collection.

Another friend bought me the basic boxed set for Christmas. I'd sit in my room, creating dozens of characters on little sheets of paper. I still have this set as well, including the awful dice that melted away, and the yellow crayon.

I started with this edition. It was a great way to learn the game, and of course it eventually funnels you into 1e. A tough system also to survive in as a 1st level character. That cover image is classic.

Yeah, I do like the cover. Always preferred this edition and basic over advanced. I just never enjoyed advanced.

I bought the Holmes Basic Set when I was 13 years old. I hadn't seen one before so I didn't know what to expect inside. Someone at school had told me that D&D was dumb because there wasn't even a game in the box, you had to make it up yourself and then use your imagination to pretend you were playing a game. The box felt light for a game, and it didn't seem like it came with much because you could only hear one smallish something slide around when you tipped the box (the dice). But once I read the rules I was enthralled and started a game as soon as I could gather some friends to play. Mine came with B1 In Search of the Unknown. I still remember those dice. A yellow d4, orange d6, green d8, blue d12, and a white d20 that you had to color yourself to mark 11-20, since it had 0-9 twice. I ran a campaign with four players for two years with just those dice. We started with the ruined tower of Zenopus, then B1, and then a dungeon of my own. A year after I got mine, my friend bought the set and it had B2 Keep on the Borderlands and the cardboard chits. The module was much better than B1, but he was really bummed to not get dice.

I never played the Holmes edition of D&D, except for a single player (me) and DM session that did go very well.

Last year I bought and read BlueHolmes Journeyman rules on Drivethru RPG. Fascinating read. It was fun to compare with Molday's B/X, which is the edition a truly played D&D for at least a year before switching to AD&D.

The first time I played D&D was a mixture of Holmes Basic and the PHB; Holmes was the first D&D rulebook that I read.

The good doctor prepared me well for the next 38+ years of running D&D. However, his clarity of writing did not prepare me for my later exploration of Gygax's dread tomes. How I wish someone with Dr Holmes' clarity of mind had written - or rewritten - AD&D.

A portrait of Holmes in an imagined study, drawn by fan David Crawford!

A fantastic portrait of Dr. Holmes in an imagined study drawn by fan David Crawford! David posted it to the Holmes Basic Facebook grou...

Chris Holmes (son of J. Eric Holmes) is on the latest episode of the Appendix N Book Club podcast discussing Burroughs' Tarzan at the Earth's Core, a cross-over with the Pellucidar series that his father wrote a sequel (Mahars of Pellucidar) to back in the '70s.