Halloween is on the way and a great way to enjoy the holiday is to run an adventure or two of horror. Elemental (review) is a universal RPG system that does horror well. JM agreed to talk to me again about horror adventure options and running horror using Elemental. 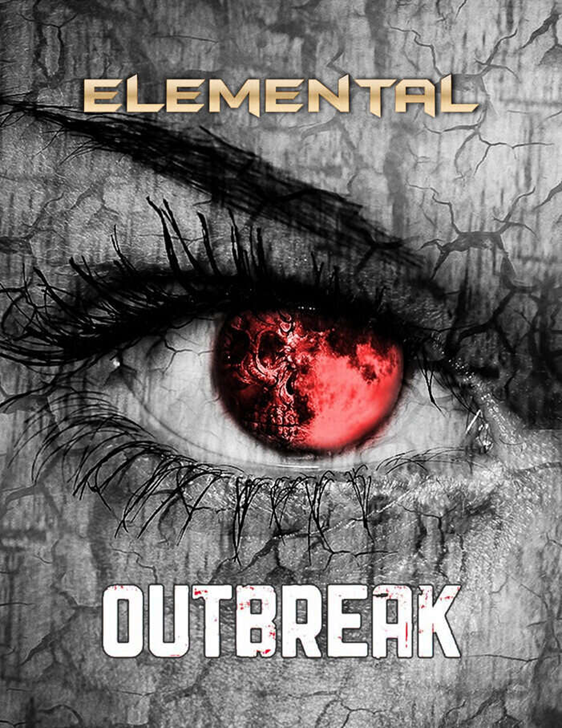 CD: Thanks for talking to me again (previous interview) about Elemental. What horror adventure is coming for Elemental this October and can you tell us a little about it?
JM: Hi Charles, nice to be with you again! We just released a zombie-themed scenario called Outbreak. It was designed with obvious love and affection for zombie films, TV shows and games. It really cranks up the paranoia, because once a PC is bitten by a zombie, it’s only a matter of time before they become a zombie themselves and turn on the other players! We had a lot of fun creating “zombified” versions of the pre-gens, complete with before-and-after portraits of their living and zombie selves. It’s currently priced at $1.99, but your readers can grab it for free using this discount link: EN World Free Scenario Offer

CD: Elemental has full rules for horror. Are the adventures for Elemental designed primarily as one-shots or could they be the starting point of a longer campaign?
JM: The adventures are primarily designed to deliver the best possible Elemental experience in one, two or three sessions (depending on the adventure). They are an easy way to try the game before committing to a full campaign, or to play something between sessions of a campaign. Furthermore, the variety of adventures available means that there’s something for everyone and it demonstrates the versatility of the system. A secondary goal of the adventures is to deliver material that can be slotted into or form the basis of a campaign. For example, if you were planning a zombie campaign, Outbreak would be a perfect campaign starter and/or sourcebook, since it contains mechanics for different types of zombies. Several adventures also contain story seeds for longer campaigns. One of them is The World’s End Masque & Ball, a gothic mixture of Lovecraft and Poe, set entirely in an old castle where decadent nobles celebrate (and perform nameless rituals) as the world outside falls to pieces. Another is Nightcrawlers, which takes place in a weird underdark where the most precious currency is light (think Veins of the Earth meets Ten Candles, for those who are familiar). While both of these adventures are self-contained, they’re also sprinkled with tantalizing references to other people and places. These hooks are useful, because we noticed in playtesting that players often express the desire to continue the story after the end of the adventure. We might consider expanding some of the adventures or producing sequels in the future.

CD: With Halloween so close, what adventure does Elemental offer that is themed for kids?
JM: She Lost Her Marbles is a fun little scenario that evokes the wonder of childhood adventure books and movies. The PCs are neighborhood kids who decide to explore that creepy old house at the edge of town. The owner of the house happens to be a witch, so of course she places a curse on them, shrinking the kids and sending them on a dangerous quest between the floors and walls of the old mansion. One of the great things about this adventure is that the players are too small to deal with threats head on, so they must use the now-huge items lying around (thumbtacks, rubber bands, marbles…) in creative ways. I hope I’m not giving away too much by saying that there’s a spider at the end! Combined with the very approachable Elemental system, it’s a great scenario for younger gamers.

CD: Another popular genre for horror is slasher films. How does Elemental handle that theme?
JM: One defining characteristic of slasher films is how predictable they are, right? You go into the movie knowing that there’s a killer on the loose who’s going to pick off the characters one by one. The formula was fresh when The Texas Chainsaw Massacre and Halloween came out, but at this point we’ve seen dozens of variants and parodies of this scenario. With Fear Can’t Hurt You, we very consciously played with people’s expectations of the genre. First, by establishing a typical slasher film setup: the summer camp setting, 80’s movie stereotypes, NPCs turning up dead, etc. And then suddenly, the scenario pulls the rug out from under the players. To reveal more would be to spoil things, so I’ll just say this: I think that sense of disorientation, of realizing that what you thought was real is a lie, even though the clues were there all along, can a great source of horror in RPGs.

CD: Alien is a classic sci-fi horror film and also an RPG. What does Elemental have to offer for horror in space?
JM: Many people have seen Alien, Aliens and their derivatives. So, if you want to surprise the players, you need to bring something new to the formula. I think Continuity does this brilliantly. It’s an Elemental adaptation of the classic Eclipse Phase scenario, with just enough detail to introduce people to the setting and run the adventure. The adventure works because it seamlessly combines several different strains of sci-fi: the monsters of Alien, the transhuman elements of Altered Carbon, the AI from 2001: A Space Odyssey and the hard sci-fi survival elements of something like Gravity.

CD: Psychological horror involves Hollywood-style insanity in movies like Psycho or isolation and fear of the unknown like in The Thing and Rosemary's Baby. How does Elemental help GMs and PCs explore the horror of the mind under assault and trauma?
JM: To pull off psychological horror in an RPG, you need to put the PCs under extreme stress, but in a way that’s fun for the players. I think Blackout does this well by exploiting fear of the unknown, which in this case is the PC’s own past. It’s a scenario for just one player and one GM, and it’s pretty intense! Another one I have to mention is a scenario that might be familiar to some readers: Jailbreak. We released a new edition of this one, adapted to Elemental from the Unknown Armies original by Greg Stolze. Other than converting it to Elemental, we added a few things like character portraits, item cards and GM tips to help people get the most out of the experience. Here, the source of horror isn’t a monster, it’s the other players! Jailbreak is a classic for good reason, and should be on the bucket list of anyone who likes psychological horror, as long as they don’t mind a bit of PvP.

CD: What other horror adventures does Elemental offer?
JM: In the sub-genre of survival horror, we have a scenario fittingly called Survival. It’s set during the Vietnam War, and features a grueling march through the jungle, where the players must overcome death, disease, starvation….”and something worse,” as the teaser goes. They also have to deal with each other, because each character has something in their past involving another character. Much of what the players encounter is based on the real horrors of the war, and we tried to make the fictional elements feel like a natural extension (or a supernatural extension) of the environment. There’s even a handy lexicon of Vietnam slang, for those who really like to get into character!

CD: Do you think GMing horror requires different skills than running a fantasy or sci-fi RPG? Does Elemental have some tools in its core rules and adventures to assist a GM in bringing horror to the game table?
JM: I do think it’s different. As a GM, the big challenge with horror is that you’re looking to elicit an emotional response from the players, not just their characters. So I think you need a well-crafted scenario that pays attention to pacing and atmosphere, and brings an element of surprise. From a game design perspective, you need a system that can handle “average jane” characters that are still interesting to play, and unobtrusive mechanics that facilitate immersion by keeping the focus on the fiction. That is, I think, the combination that makes Elemental uniquely suited to horror, and it probably explains why our horror-themed adventures are so popular. In addition, each adventure brings little add-ons to the system that reinforce its unique themes. For example: the Stress rules in Continuity, Light rules in Nightcrawlers, Amnesia rules in Blackout, Bonds in Survival and Drives in Jailbreak. These tools can of course be lifted and reused outside of those scenarios.

CD: Any final comments you’d like to share with the readers of EN World?
JM: The adventures I mentioned today add up to 40+ hours of horror gaming and include everything needed to play, including pre-generated PCs. And that’s not including the other (non-horror) scenarios and dungeons available on our DriveThruRPG Page, and all the other cool things we’re working on. Last but not least, as we discussed in our last conversation, we’re happy to offer these adventures for free. They contribute to making Elemental easy to bring to the table, and provide value to fans of the game above and beyond the core book itself. Thanks for the questions, and happy Halloween gaming!

Charles Dunwoody started playing and running RPGs with Advanced Dungeons & Dragons (before it was first edition) and is currently GMing Coriolis the Third Horizon. Currently, he freelance writes including articles for EN World and Geek Native as well as his first PDF adventure for Call of Cthulhu: Michigan Mythos: Fall Colors. He wrote a few articles for Dragon Magazine when it was in print, wrote a bit more for Mongoose’s electronic Signs & Portents, and was paid for a supplement for Bulldogs! (d20 version) that was sadly never published. Charlie is a participant in the Noble Knight Affiliate Program and the OneBookShelf Affiliate Program, both of which are affiliate advertising programs designed to provide a means for sites to earn advertising fees by advertising and linking to Noble Knight Games and DriveThruRPG respectively.
J

Just a quick addendum to say that the Elemental core book and player's guide are discounted as part of DriveThruRPG’s “small press spotlight sale”, which includes many other designers worth supporting and ends in…22 hours and 24 minutes
Last edited: Oct 12, 2021

What is your opinion of Savage Worlds?