Since 2019, tabletop gaming based properties have made the leap from books to toys in the form of action figures. In the first part of this two part gift guide, I talked about what makes a toy an action figure as well as suggested the plastic versions of Cyberpunk 2077 figures, McFarlane Toy's Warhammer 40,000 figures, Bandai’s take on the Warhammer 40,000 licence, and JoyToy's Warhammer 40,000 figures and vehicles. In this article, I share the recent and upcoming toylines for Dungeons & Dragons, The Legend of Vox Machina, and an action figure line with its own RPG, Mythic Legions. If you’re looking for a holiday gift, these might be the perfect toys for the gamer in your life. 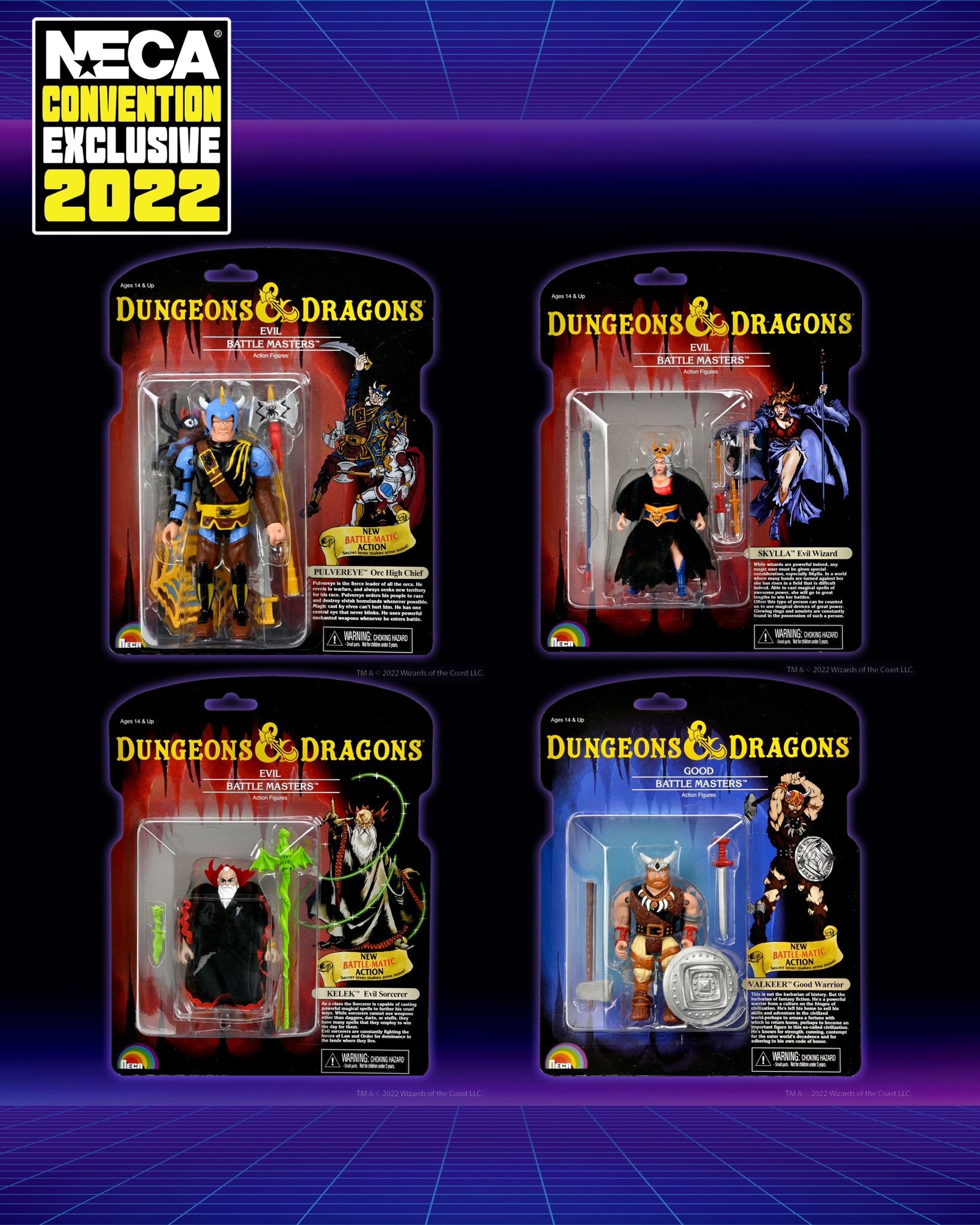 Let’s lead with the toyline that most directly bridges the gap from the first RPG action figure line ever. Tying back into the original 1980s LJN Dungeons & Dragon line, NECA has two products. The first is a “Lost Wave” that creates some of the never produced LJN Dungeons & Dragons figures in their original scale, materials, and articulation. They’re rough by today’s toy standards, but it’s neat to see figures created from 1980s preview photos and unrealized LJN package art from the first RPG action figure line. These lost figures were a special collection offered by NECA during San Diego Comic Con 2022. 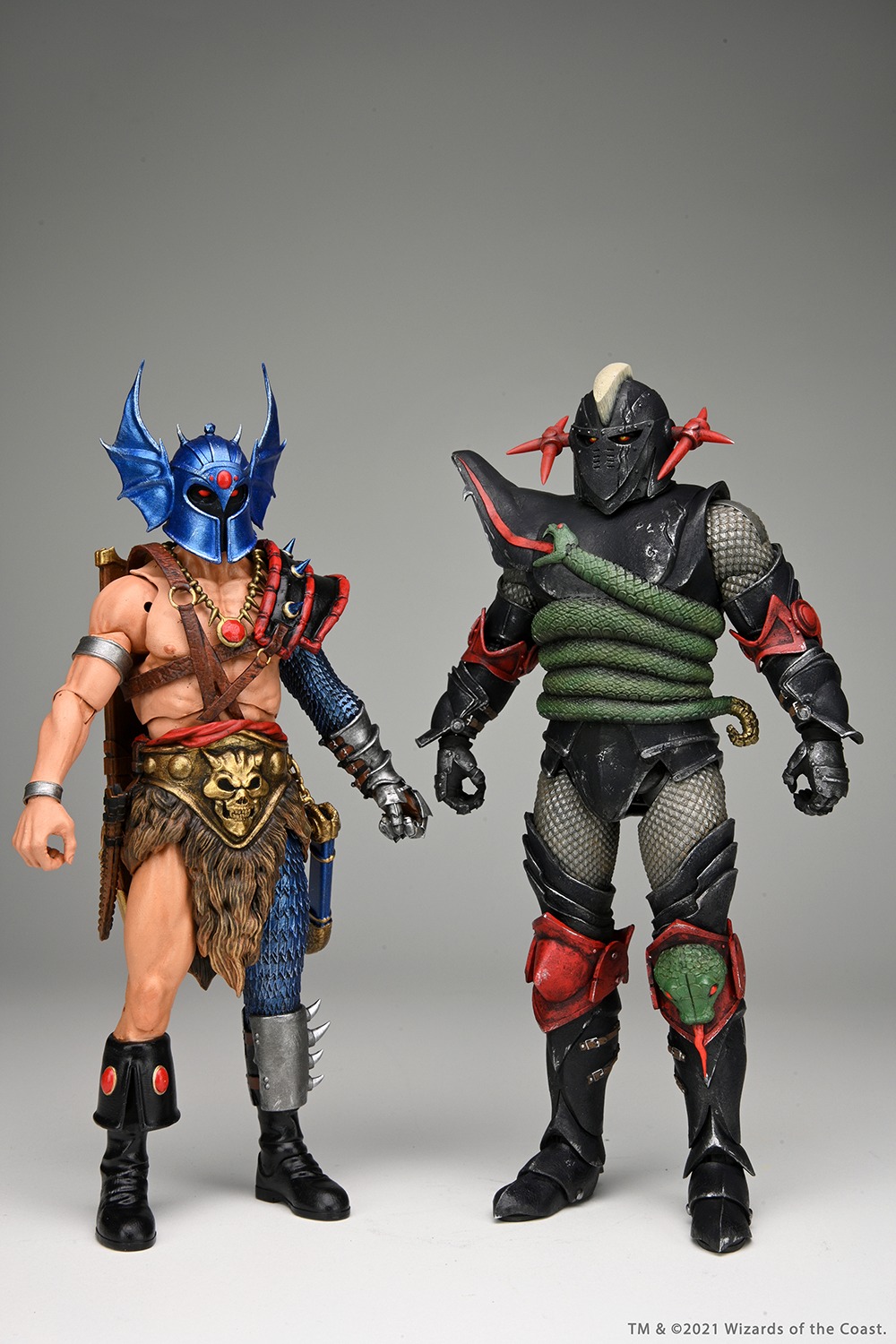 NECA’s second line takes the most popular characters from the LJN line and re-imagines them for today’s collector market. Starting with Warduke and Grimsword, NECA is re-sculpting, re-sizing, re-accessorizing, and, generally, re-imagining how these key figures from the LJN Dungeons & Dragons line would look in modern 1:12 scale. Warduke’s appearance is iconically D&D with his mismatched gladiator armor and hidden features. Grimsword rocks an almost Marvel supervillain amount of snake detail on his armor. These figures should be available either during the 2022 holiday season or shortly after. Either way, they’re going to be sought after by gamers from the 1980s. 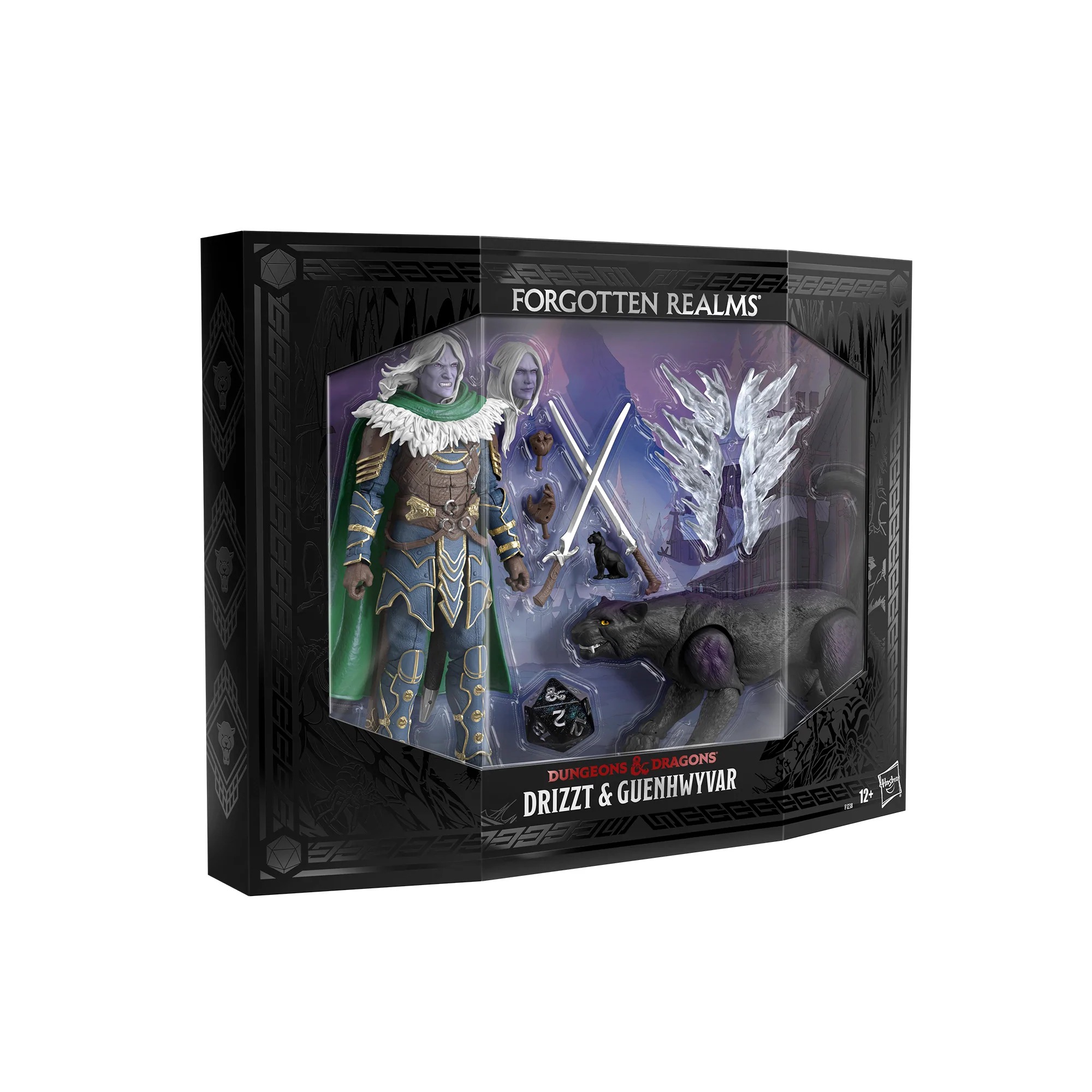 In 2020, Hasbro brought something new to the action figure market: a two-pack of Dungeons & Dragons Forgotten Realms Drizzt & Guenhwyvar. This Hasbro Pulse (Hasbro direct-to-consumers website) listed an exclusive set of the two characters in 1:12 scale. The figures feature great detail and articulation; they bring the characters to life with different accessories and a d20. Best of all, they’re still available on the site as of this writing.

After that first experiment, Hasbro, the owners of D&D, took advantage of their position to license the LJN figures to NECA. However, they held onto the rights for the 1980s Dungeons & Dragons cartoon and the upcoming movie figures. 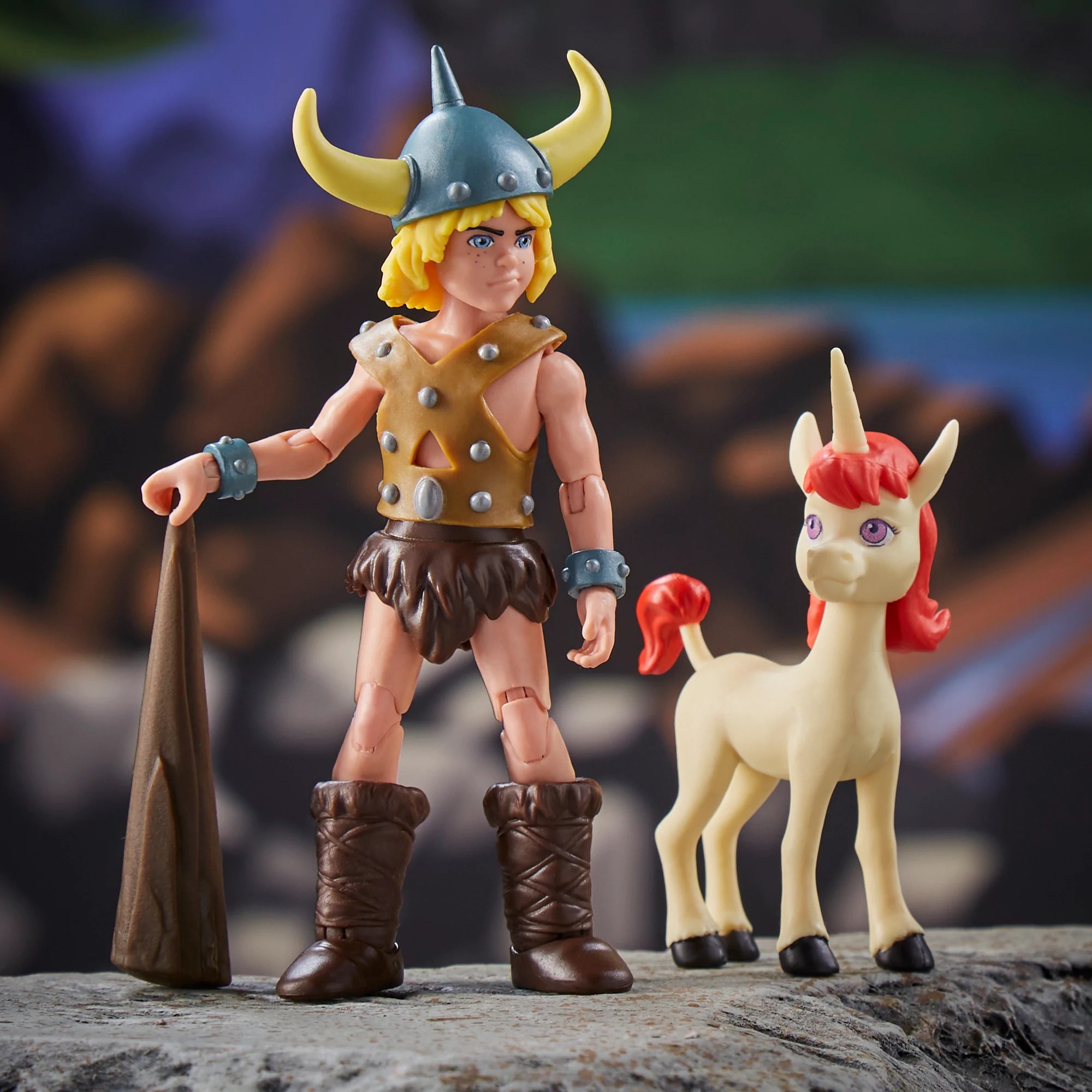 Hasbro has a line of Dungeons & Dragons cartoon figures based on the original 1980s cartoon. So far, they’re offering Dungeon Master, Venger, Hank, Diana, Bobby, and Uni. These toys are true to the animation style of Toei Animation, and a great collectible for a show that’s nearly 40 years old. These should be out by the time the D&D movie arrives in theaters, giving new and old fans something cartoony to display around the gaming table. 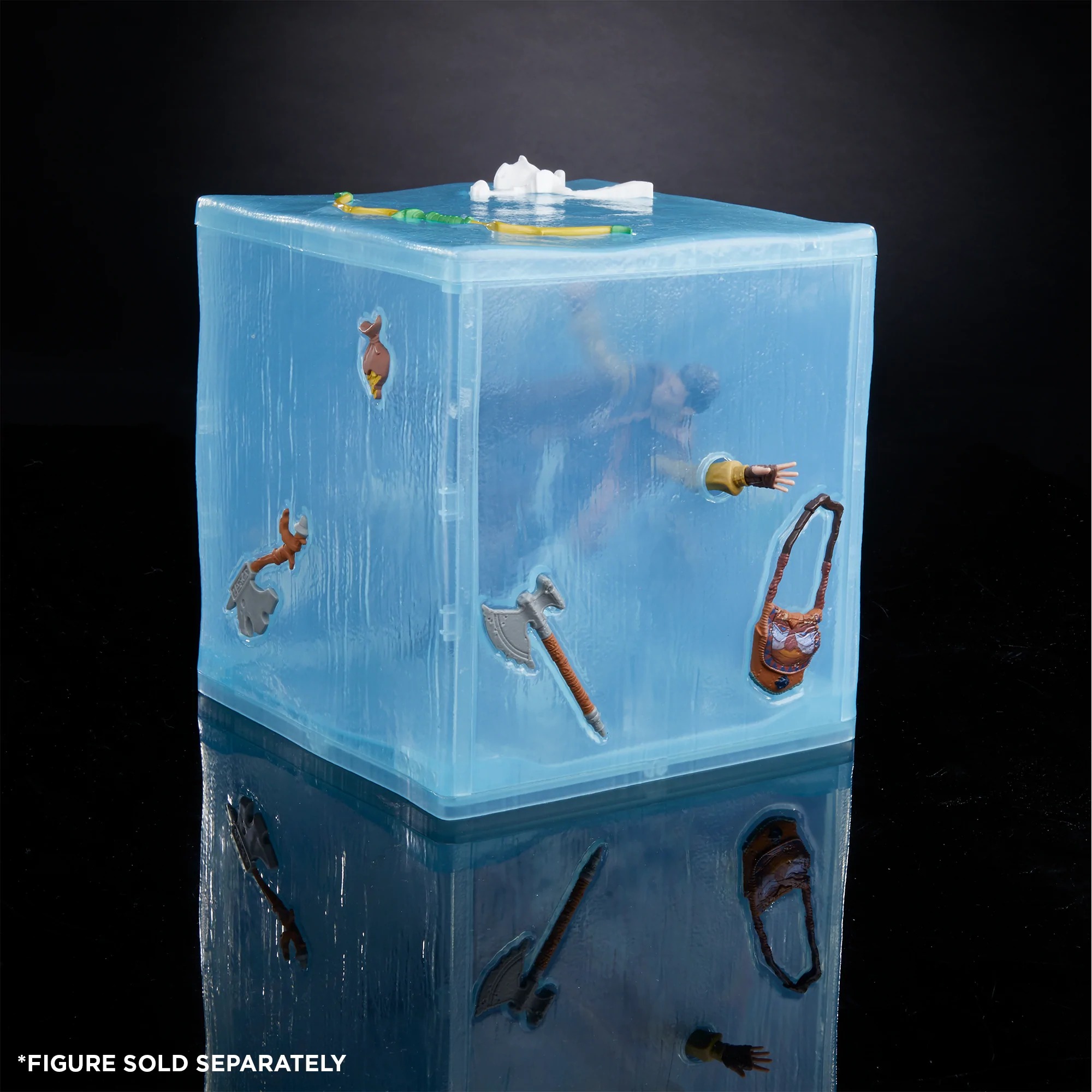 Beyond the original cartoon, Hasbro previewed a few items promised for around the time of the D&D movie (first quarter 2023). Their first movie offering is the gelatinous cube modeled on the one seen in their Dungeons & Dragons: Honor Among Thieves trailer. In addition, they’re making figures based on the look of the actors from the movie. 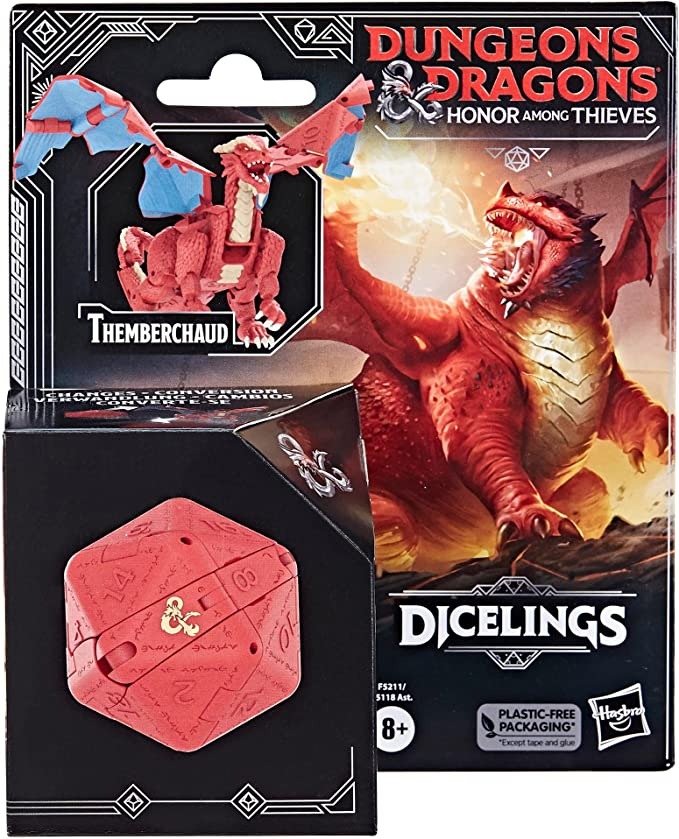 Expanding upon the movie toys, Hasbro is offering one of their best ideas to date: Dungeons & Dragons Dicelings. These are “dice” that transform like a, well, Transformer into a beholder, two different dragons, or an owlbear. These designs are a great meeting of tabletop’s form plus toy’s possibilities and I can’t wait to get a set. 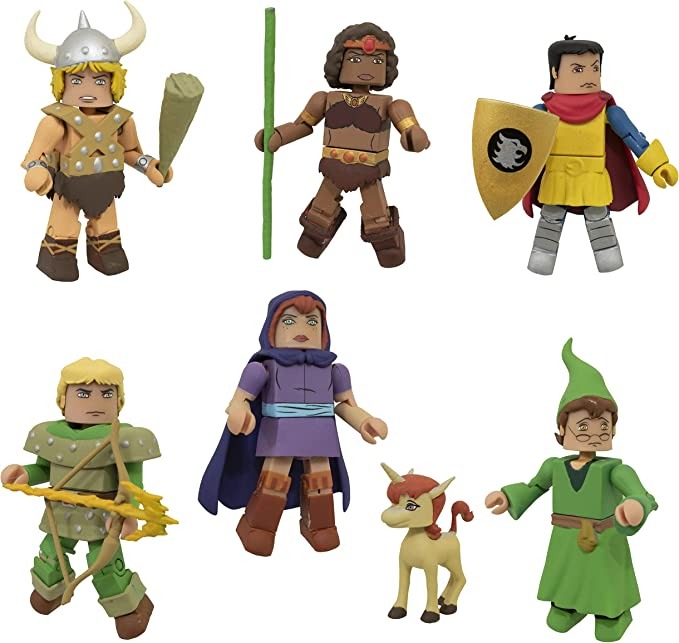 Let’s circle back to the 1980s D&D cartoon one more time as we look at one more D&D themed line, this time from Diamond Select: Dungeons & Dragons Heroes Minimates. Minimates are posable two inch figures, in this case recreating the core cast of the D&D cartoon. These blocky versions of the cast of the cartoon are similar to the Pathfinder offerings from half a decade ago, giving fans a full set of D&D characters that could be stood alongside Pathfinder characters.

Not out yet, but coming soon: LEGO Dungeons & Dragons! This isn’t truly action figures, but these LEGO sets will display nicely alongside figures like the Dungeons & Dragons Dicelings. LEGO does great work and I expect to see some worthwhile sets. That said, this isn’t D&D’s first building blocks toy, KRE-O holds that distinct, obtaining the license during the 4e era back in 2014. I’ll be curious to see how the different sets compare. 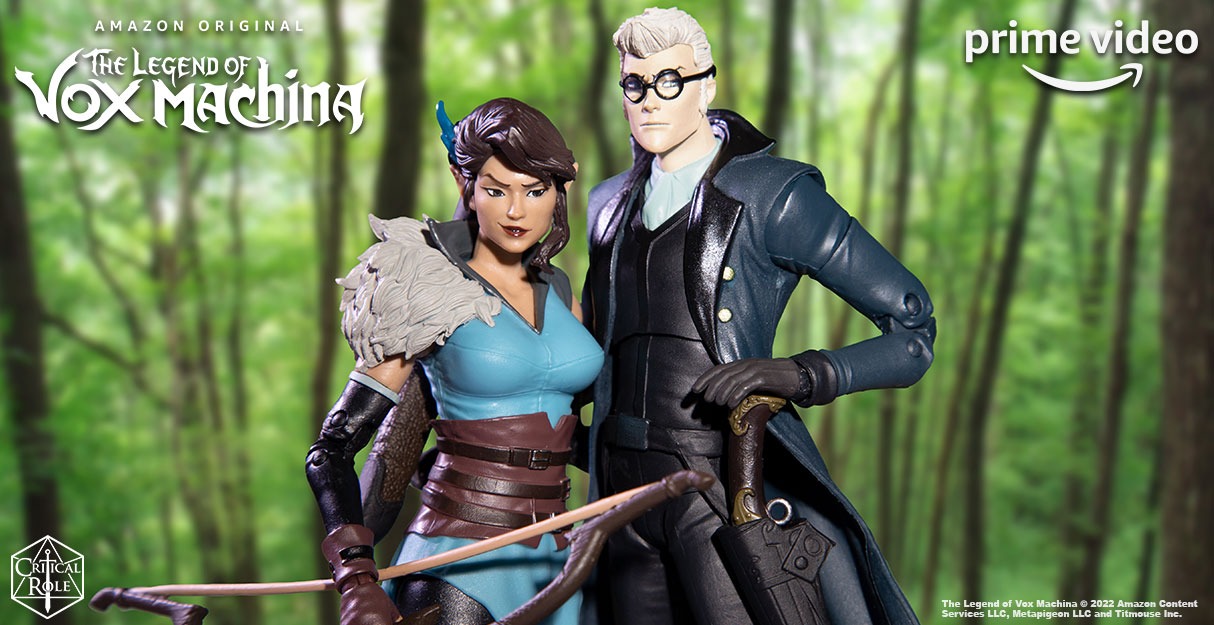 The Legend of Vox Machina from Mcfarlane Toys​

Going beyond official D&D, let’s talk about Critical Role’s toys. These RPG entrepreneurs managed to launch two toy lines taking their D&D characters from actual plays to action figures. First up is the 1:10 scale line from McFarlane Toys, The Legend of Vox Machina. Out now, you can find Keyleth, Vax’ildan, Vex’ahlia, and Percy at Target and, of course, Amazon. Each character looks like they stepped out of the Amazon Prime animation. 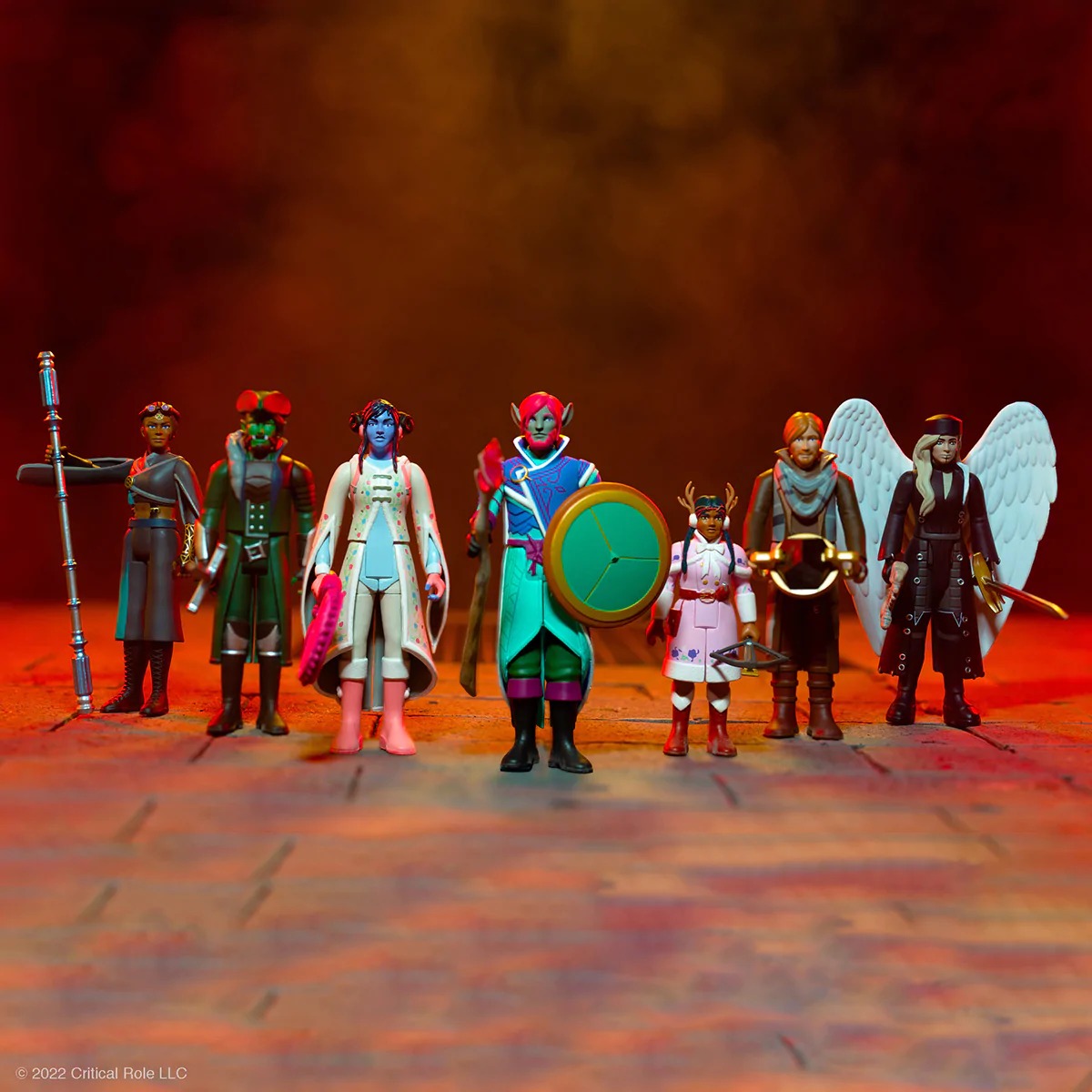 The Legend of Vox Machina from Super7​

Coming in at a different scale and POA is Super7’s Critical Role ReAction Figures for Vox Machina. ReAction Figures are 1:18 scale options with five point of articulation figures, simplified to remind collectors of older toylines like the original Star Wars action figures. If you’re looking for a simplified version of Vox Machina characters, this isn’t a bad option as you can order all of the figures at once.


What Should You Get?​

All of the Warhammer 40,000 lines, the Cyberpunk 2077 figures, and some of the Dungeons & Dragons and Vox Machina figures are out now at major chains, certain FLGS, comic book, and independent toy stores. Others, especially the D&D figures, are coming in the first quarter of 2023 to take advantage of the hype around the D&D movie. If you have an action figure collector/gamer in your life and need something cool for them this holiday season, these figures may tie two of their geek passions into one great gift.

I hope that wiz kids releases the whole line of the LJN action figures as miniatures. The ones they did were a lot of fun.

"What are you doing? You can't split magic armor up that way!"

Boy do those D&D cartoon toys bring back memories. I had Kelek, Elkhorn, and Strongheart. Would love new versions of the latter.

Joshua Randall said:
Boy do those D&D cartoon toys bring back memories. I had Kelek, Elkhorn, and Strongheart. Would love new versions of the latter.
Click to expand...

They've shown some preview images of Strongheart from NECA. I would have included him, but they haven't solicited him yet. 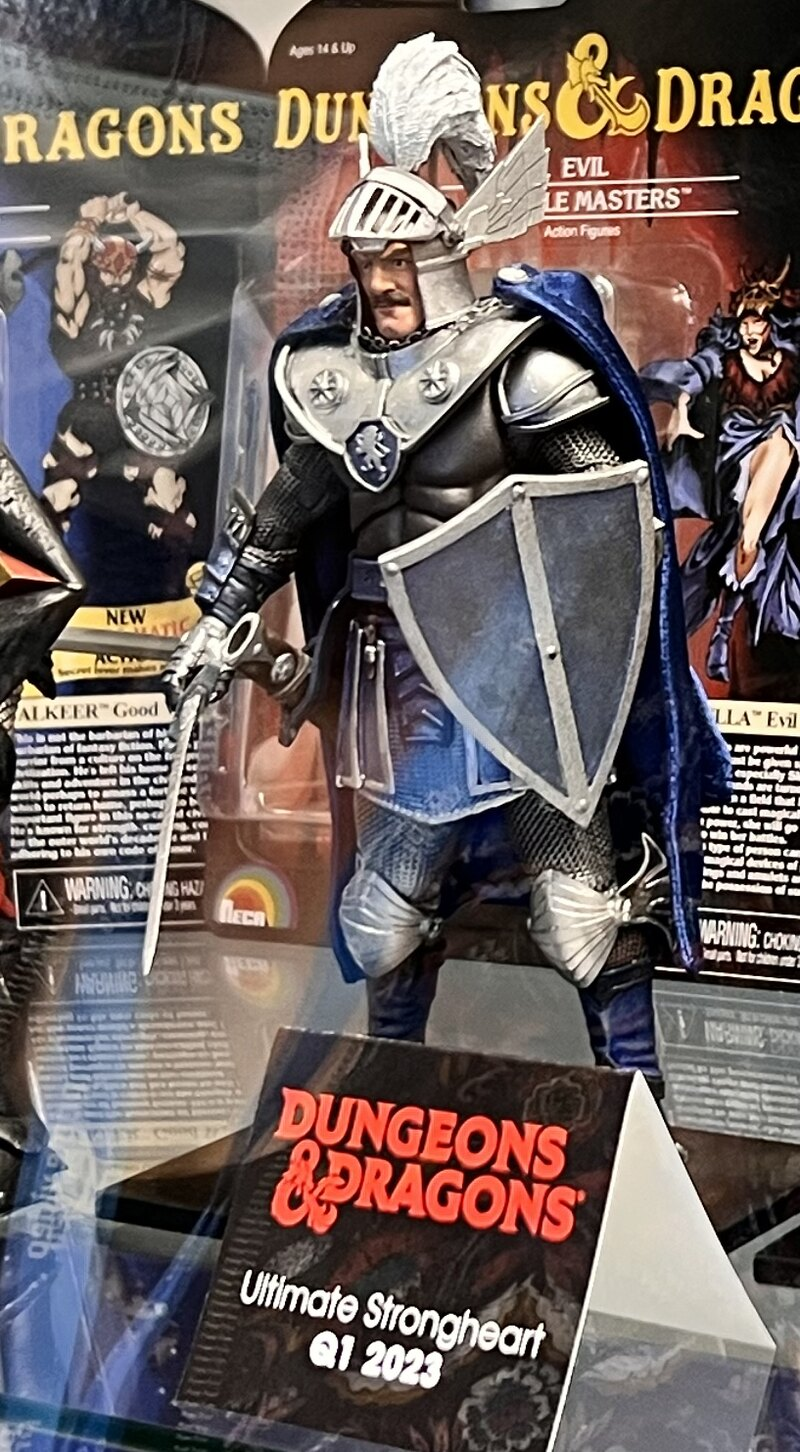 I wonder how would be a sequel or spin-off of the 80's cartoon. I guess the original group returned to home (but Presto, who wanted to be with the illusionist girl). The new group would add more female characters, and an Asian and a Hispano. Maybe each season would be a different group, always coming back to home, and maybe some reaparition of members of the original group as a joker card to save the day, and "guests".

And we should see different species, for example the dragonborns, and maybe the comingsoon ardlings.

Maybe some characters of the Realm are "reincarnated isekai", and the new body wouldn't be human.

Egg Embry said:
They've shown some preview images of Strongheart from NECA. I would have included him, but they haven't solicited him yet. View attachment 269021
Click to expand...