Effectively a ton more "high level slots", since the chance to lose them isn't much more than lower level ones. Fireballs are only 2 DC worse than Magic Missile.
Click to expand...

Could turn sorcery points into successes on the checks or something.

Deset Gled said:
It's a bit too chaotic for my taste. There will be some days when casters get twice as many spells per day as other, for no reason other than luck, with little ability/notice to plan around it. This feels like turning resource management into herding cats.
Click to expand...

Yeah, it gets rid of resource management entirely, as far as spells are concerned. This could be a good thing or a bad thing depending on the style of play you're looking for. But yep...you make an excellent point. This will fundamentally change the way the game works for most characters.

FWIW, here's how some numbers work out:

This is why we decided to abandon the idea of making checks. Originally, we were going to use these checks to successfully cast the spell, not to resist strain, but the numbers work the same. 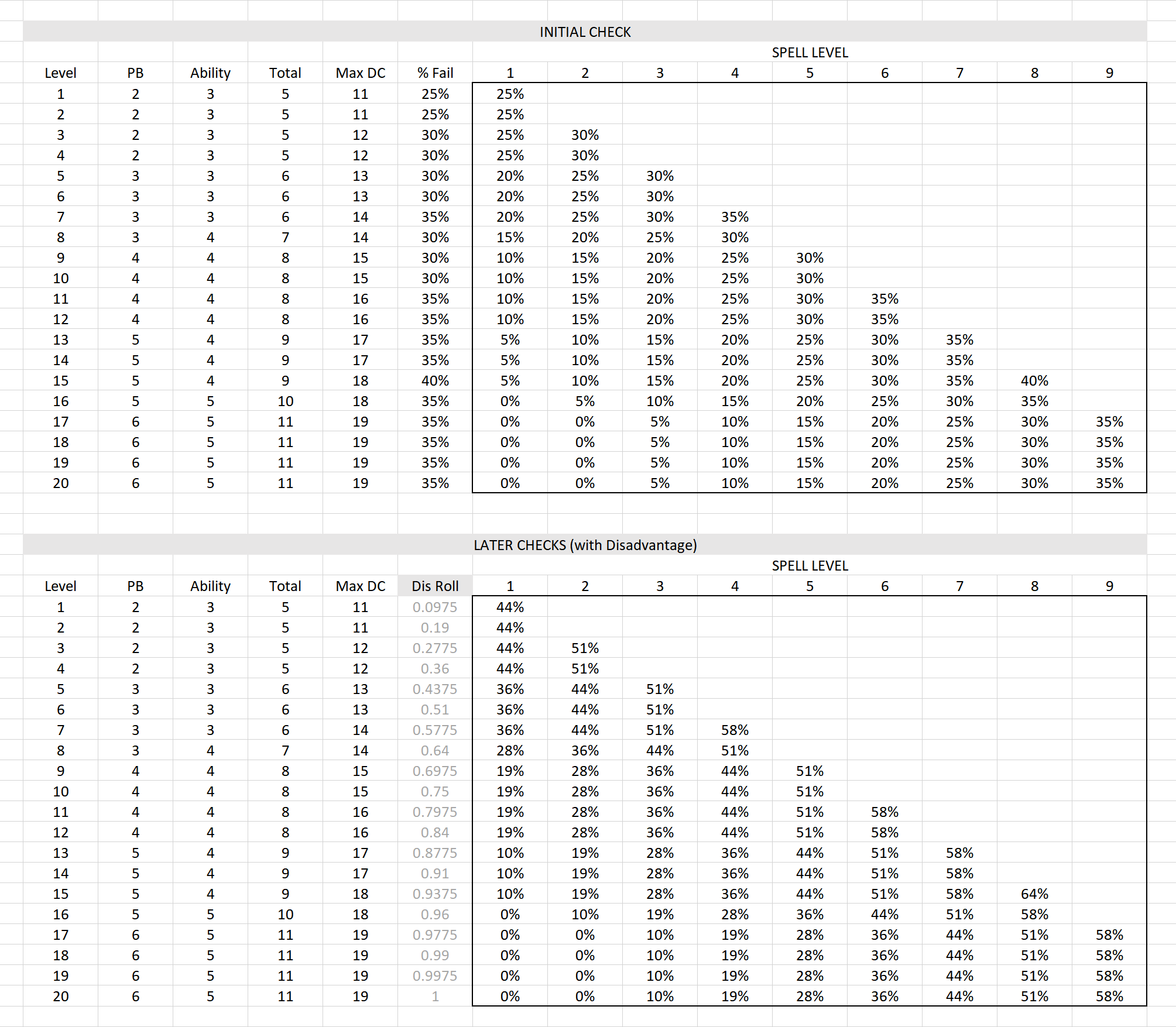 What I might do is just make it that if you are casting your maximum level spell, roll the d6 to avoid losing it. On a 1-2 it is lost. After the first casting, the roll is made with disadvantage. This would represent the strain of casting your most powerful spells (or at those spell levels). Just a thought.

Love the concept and think this would be a GREAT mechanic for a psionic class.

As for all spell casters, I feel like you may want to have it be 12 plus 2x Spell slot level, otherwise this is a major power up for casting classes. Also, I'd consider keeping 8th and 9th as 1 slot per day, otherwise, a high level wizard could load up with 4-5 9th level spells memorized and effectively get at least 4-5 ninth level spells.

DND_Reborn said:
FWIW, here's how some numbers work out:

This is why we decided to abandon the idea of making checks. Originally, we were going to use these checks to successfully cast the spell, not to resist strain, but the numbers work the same.

What I might do is just make it that if you are casting your maximum level spell, roll the d6 to avoid losing it. On a 1-2 it is lost. After the first casting, the roll is made with disadvantage. This would represent the strain of casting your most powerful spells (or at those spell levels). Just a thought.
Click to expand...

Just a note tho (and thank you for doing the math): you dont add the PB to the roll, its only a flat d20+ability modifier.

vincegetorix said:
Just a note tho (and thank you for doing the math): you dont add the PB to the roll, its only a flat d20+ability modifier.
Click to expand...

Here it is without proficiency bonus. 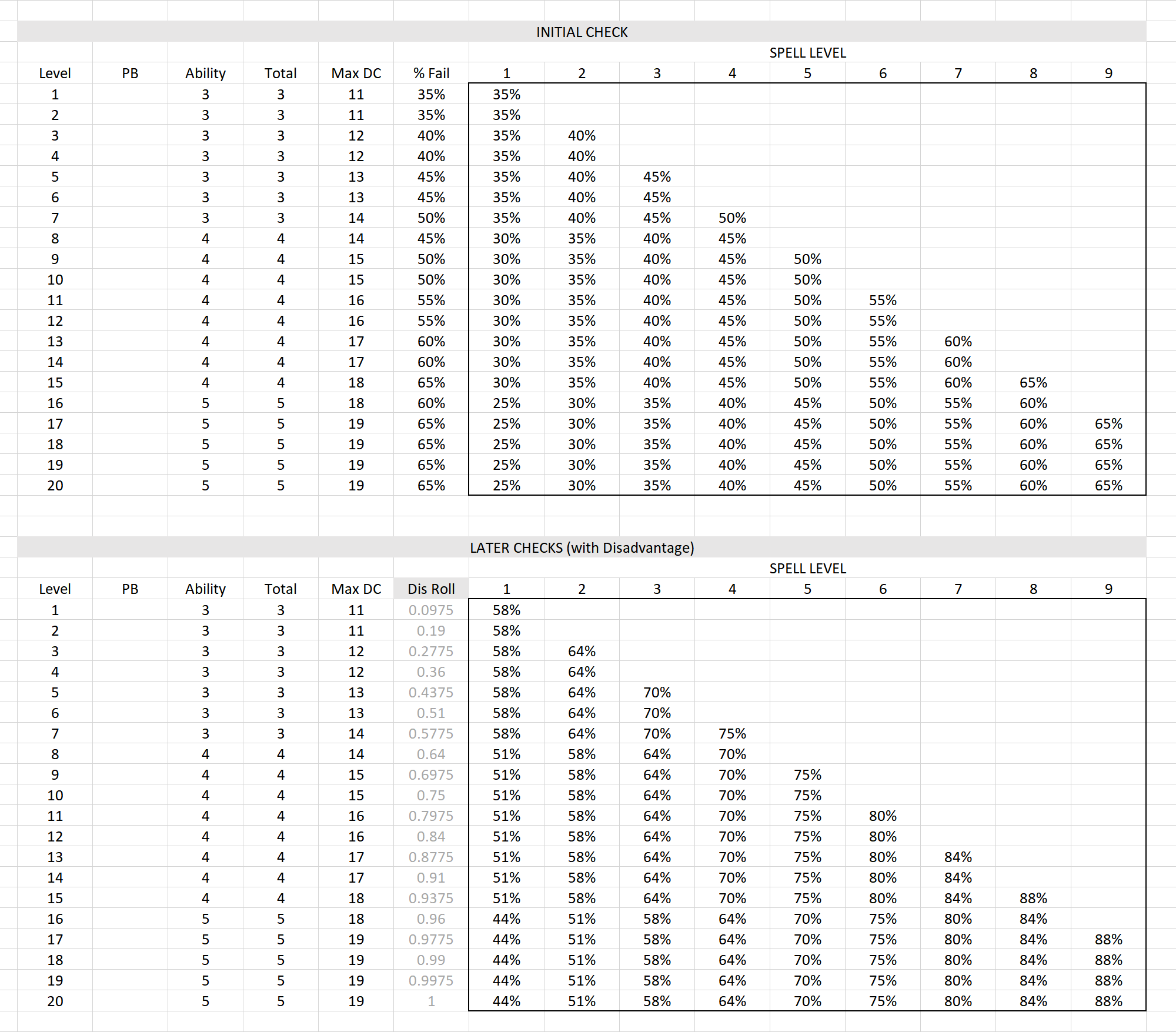 I feel like a number of class features, feats, and other stuff would completely trivialize this system of Spell Strain.

vincegetorix said:
So my hot take of the day is this:

At my table, I'd remove spell slots, an instead have the player do a Strain check to avoid forgetting the spell after using it, like they do in the Black Hack 2e.


ie: You, as a wizard, want to upcast magic missile as a 2nd level, after the casting, you must make a DC 12 intelligence check. On a failed roll, you forget a spell of 2nd level you are prepared.

Rituals and cantrips dont require Strain check, unless you use a variant where cantrips must pass a DC 10 Strain check.

How does it look?

I also would not make strain go against your casting stat though. I would make it against Strength so it is a more difficult check.

If you made these two changes (only 1 spell at levels 6+, strain is a strength check) then I think you would have something that is pretty balanced. It nerfs full casters a bit, but it makes third casters more powerful.

Supporter
Various OSR properties already do variations of this. It works fine if some attention is given to balance.

I was with you until that last upcasting bit.

I have a book (Grimm Tales)where you can cast as much as you want but casting spells is deadly:

You cast a spell and you take 1d8/ spell level in CON Damage.

To be a good caster, you need several feats(I forget the names of the feats but):

This was D20 modern Chassis so you got lots of feats and you had to invest in being a wizard and you could only find spells while adventuring. Nonetheless, I like this system of 'Spell Fatigue' much better. I feel there would be a way to make it work in 5e. Obviously, as written above couldn't work in 5e, but I feel there could be a way where spellcasting slowly wears you down.

Why? Whats the advantage of this?

Ixal said:
Why? Whats the advantage of this?
Click to expand...

You would not have to track spell slots?

vincegetorix said:
You would not have to track spell slots?
Click to expand...

You would still need to track which spell you forgot and which not.

Interesting system--it would certainly force players to rely on a greater diversity of spells, since you can't just spam the same thing over and over. And I'm a big fan of alternative casting systems to make caster classes feel more unique. I do see a few issues with this version, though:

1. Disadvantage if the spell has been cast since the last long rest introduces extra bookkeeping. I'd prefer to adjust the base DC instead.
2. I'm not a fan of how you can lose a different spell when you upcast. I understand the logic behind it, but it just feels wonky.
3. If I'm a level 5 wizard with 18 Int, I can prepare up to 9 spells per day. Why would I not prepare third-level spells for all nine? Even if I fail every Strain check, that's still nine third-level spells for a 5th-level caster! And the DC is only 13, so I have a 60% chance to make it; that's an average of 22.5 third-level spells per day.

Personally, I would love to explore a system like this for sorcerers. The unpredictability of it feels very sorcerer-like, particularly if you can accept levels of exhaustion to keep going--and it might be able to replace sorcery points as well! I might sit down and crunch some numbers later to see if I can get the expected number/level of spells lined up with the regular spells-per-level chart.

I am more in favor of old school spellcasting personally. You have to prepared each spell the number of times you want to cast it. You can choose to spam a spell, but then you lack the utility of having other spells prepared and it takes strategy to a lower level IMO.

The first think I asked myself is: What problem is being fixed? I don't see the problem with spell slots like in 5E.

For some missions, it is mission-critical that you can cast a spell twice (e.g. (1) teleport in, teleport out, or (2) invisibility, action where you become visible, re-cast invisibility, or (3) feather-fall on multiple people).
I would be reluctant to undertake such missions in this system... and because of that this would feel like it limits the abilities of the spellcasters compared to the default. If that's your goal, then go for it. As a player, I would not be in favor.

In terms of narrative I like it a lot. I've always found spell slots from a narrative and worldbuilding standpoint (for most fantasy worlds, they serve the specific Dying Earth story they originated with beautifully and it is an absolute masterpiece). Some sort of less rigid exhaustion is compatible with a lot wider range of approaches to magic.

But, all that said, from a gameplay perspective I really prefer the predictability and balance of the spell slot system, and also don't want to have to do an extra roll after every spell.

This looks like it would make low-level spells dramatically weaker (and basically end all upcasting forever), while making high-level spells actually more powerful than they are.

So...nah, hard pass. Not because of the randomness (though that is also an issue), but because it hard-nerfs the part of spellcasting that least needs it while potentially buffing the part that dramatically does not need it.

Ixal said:
Why? Whats the advantage of this?
Click to expand...

I think the idea is to make D&D spellcasting a bit less Vancian and a bit more unpredictable and unreliable, more like it works in other fantasy fiction.

I'm not sure this particular take quite works (as folks about have pointed some issues with the math), but I've had pretty good results running 5 Torches Deep for the last couple of years, which works similarly. Casters are definitely not as dominant or reliable in that game.
Last edited: Jan 28, 2022

D&D 5E Character Build - As Many Spells As Possible?