I Am For The Darkmaster, Actually 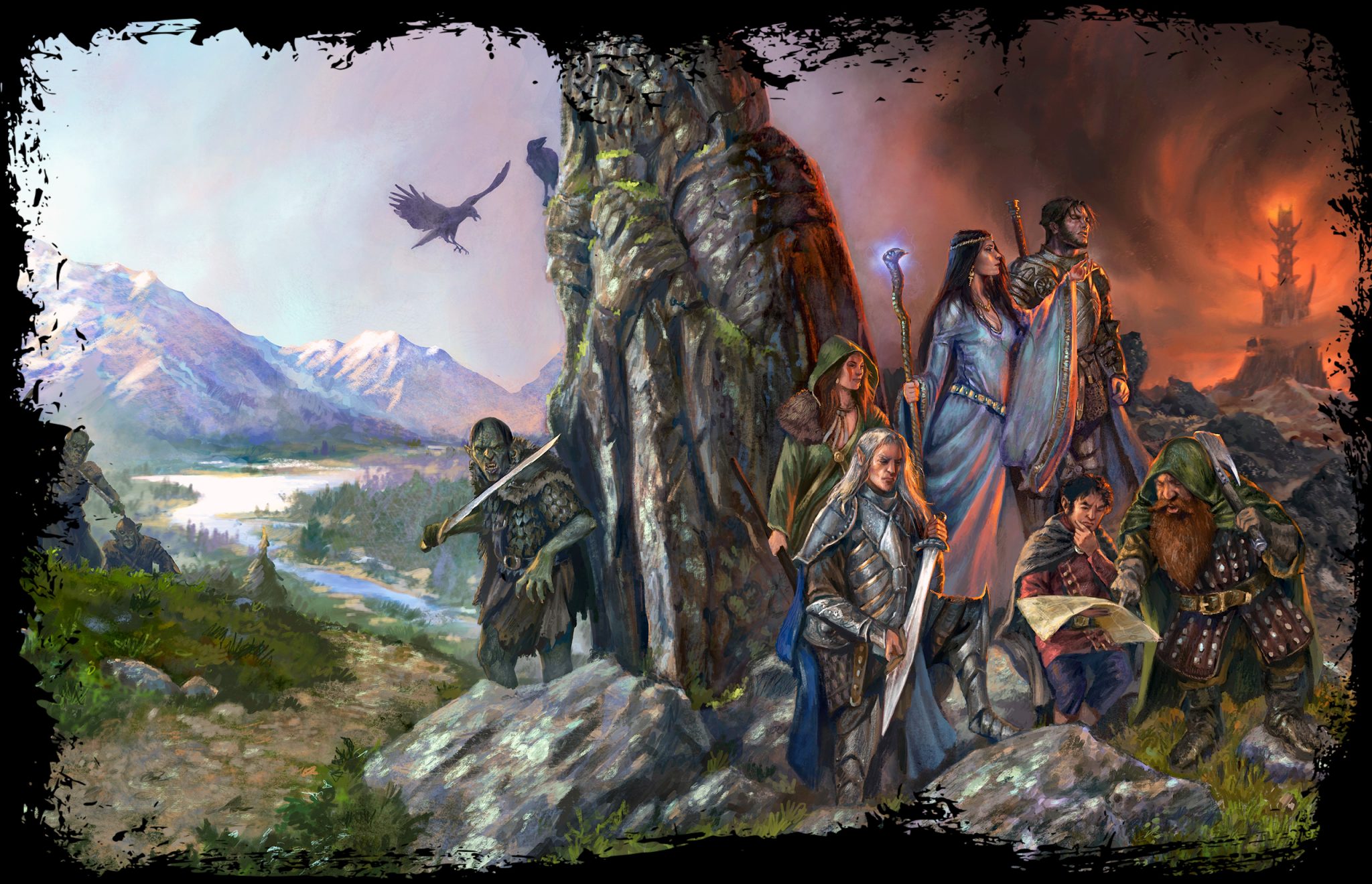 In my misspent gaming youth, there was a game that the other members of my gaming group spoke of in strange, hushed tones. A game where you rolled on chart after chart after chart during battles. Where critical hits were described in gory, R-rated detail. Where character creation took hours and characters could die in seconds. This game was called Rolemaster.

Whether or not Rolemaster lived up to the hype of those 8th grade memories, I can’t say. But I can talk about Against The Darkmaster, an OSR-style revamping of the rules from lead designer Massimiliano Carachristi. It may seem weird playing a product that’s built on nostalgia for a game that I’ve never played, but good OSR designs stand on their own without the need for nostalgia to carry them. Nostalgia, at best, is meant to flavor a design and smooth over a rough patch or two. How does this game fare without me fondly remembering the charts of my youth? Let’s look at the copy provided by Open Ended Games.

The book is a 570+ page tome with a full-color cover and crisp black and white line drawings in the interior. Art director Tomasso Galmacci is also listed as one of the interior artists and he nails the classic look of an 80’s rulebook. The work here reminds me of the sharp art in Forbidden Lands with some great full page pieces breaking up the chapters. Layout is kept to a simple two columns with scroll-like sidebars breaking in the text. It’s here where Against The Darkmaster starts to tip its hand that it’s not going to be a simple reprint of Rolemaster. Many of the sidebars scattered through the text offer rules hacks and tweaks with ideas that modernize the rules. I love it when designers offer these options in a rulebook.

The system starts out simple enough. Roll percentile dice, add them to a skill percentage and if they get 100 or over, the character succeeds. Roll over 175, and that’s a critical success. The success chart also suggests other modern elements, such as a success with a cost for a roll between 75-99 or a critical failure of 5 or below. Players can climb these heights (or fall into the mathematical pits of despair) because the percentile rolls are open ended. 95 or higher means the players roll again and add, while 05 or lower means the players roll again and subtract.

Combat and magic are where the charts start to truly make their appearance. Combat rounds are structured so that magic and ranged attacks sandwich melee action in a round. That allows for some weapon strategy too, as the longer the melee weapon is, the earlier it goes during the melee section. Instead of the base 100 target number weapons are rolled on a chart determined by their type of damage with each of the four armor types on the chart. If the roll is high enough, a second roll occurs on a critical hit chart also determined by the type of weapon. That’s where a short description of a nasty injury lives, along with some long term effects of the injury like a torn tendon or bleeding hit points each round. It also helps in the modern era for those with the PDF to print out any relevant charts and have them handy for each player’s damage.

Magic’s complexity comes in its versatility. The majority of the classes come with some level of inborn magic talent, with any classes having access to spell knowledge by trading in skill levels on a two for one basis. Multiple rolls for a single action slow down game play, but it doesn’t do so much more than separately rolling to hit and damage. There are magic points and modifier charts, but the real cost of magic is that if a magic user does too well, they run the risk of revealing the heroes to the Darkmaster and getting some supernatural goons sent to take out the good guys.

The Darkmaster is the main villain of the campaign created by the GM as a stand-in for them in the world. Rolemaster was related to Middle-Earth Role Playing and this element offers a chance to let the Game Master let their inner Sauron fly by taunting the PCs or sending some monsters to attack the party. It’s a fun riff on the wandering monsters concept and for those who might not have a fantasy villain in mind at the start of a campaign, the book offers a few charts for inspiration, as well as some sample villains and minions lavishly illustrated in some of my favorite art in the book. Creating a Darkmaster feels like a middle ground between the antagonistic play of early RPGs and the collaborative play of modern designs.

The Darkmaster creation is of the modern ideas incorporated into character creation, such as drives that come off as aspect-like ideas that encourage players to get into trouble to score advancement points. Players also get background elements that work a little like feats while also tying into drives and shared world creation. A character that has an Assassin training background is encouraged to make their relationship with their guild as a drive and the GM is encouraged to build the details of that guild together. While Against The Darkmaster is built by a team that loves the original game, it plays like the version of the game I would run: keep the stuff I like, add in stuff that fits my style.

If I wanted to run a game that felt like the weird, dark 80s fantasy of things like Dragonslayer or Willow, this is the game I would use. It’s heavier than my usual fantasy RPG choices, but sometimes you just have to play a game where you high five everyone at the table when you deliver a gnarly blow to the kneecap of the vampire king the Darkmaster sent to kill you.

I am a game designer with over 15 years worth of game credits and industry experience. My work includes licensed games based on worlds like Star Wars, Star Trek and Firefly, classic game worlds like Dungeons & Dragons and Shadowrun and my own creations like Camelot Trigger and Save Game. I play a wide variety of games as part of Theatre of the Mind Players and have been the guest of honor at several conventions. I live with my family in Wisconsin, born near the heart of RPGs (and just a few short years younger than they are).
H

Ace said:
We were playing Rolemaster Standard System but it seems the time is pretty close.
Click to expand...


Note too that electronic character sheets can make character creation a lot faster than it used to be in Pen and Paper back in the Ancient Days. Things like racial stats and talents, professional skill costs, and culture ranks are literally done at the click of a button.

For RMU, I've also outlined a bunch of 'templates' that are kind of like standard builds for each profession (or even somewhat like Training Packages for RMSS). This is made easier in RMU since all characters get the same amount of Development Points (60) to spend each level. So, I have a 'Fighter' template that has 2 ranks in several weapons, 2 in Body Development, 2 in maneuvering in armor, etc. If you don't want to buy your skills individually -- if for example you are new to the game and don't want to gimp yourself -- you can just take the standard build, at least at first level.

All of that being automated then makes for very quick character creation. There are a number of player-made tools for doing that already, and Rolemaster's Electronic Roleplaying Assistant will have its own character creation and tracking tool read for RMU when it drops (they have to wait for the release of RMU before they add the RMU module to ERA).

aramis erak said:
The Character Sheet book made RM (2E?) pretty quick... by having all the skills and their costs prefilled on the sheet for a given class. IIRC, it covers all the classes up to RMCIV.

By pretty quick, took me about 30 minutes, same for my friends.
MERP was about 15-20 minutes due to the reduced number of calculations and lookups.
Which said reduction AtDM inherits.


Being the author, I'm probably not the best person to answer this question, but judging by what I've seen, once you get familiar with the system 15-20 minutes seems more likely, even without an automated sheet. You may take a bit more if you start fiddling with background options, but we're still closer to MERP than RM.