D&D General "I have played in or run a D&D campaign set in Greyhawk." (a poll)

iserith said:
I ran Age of Worms adventure path years ago and that was set in Greyhawk. I didn't find anything particularly remarkable about the setting, but then I didn't delve too much into the lore. It was mostly backdrop in that game.
Click to expand...

Yeah that's kinda Greyhawk though. It's a DM's world. They didn't do a really deep lore dive with Age of Worms because it was Paizo, not the way they would have liked, much like SHackled City was supposed to be Greyhawk as well.

GH is kinda meat and potatoes but also has its own flavor too. Its sword & sorcery, Fritz Lieber with a bit of, well, what we would see as The Witcher, and some Lovecraftian elements, especially coming off the Wars era into Living Greyhawk. Paizo was limited in what they could do with Greyhawk.

But the city itself? It's Lankhmar with a castle and dungeon outside the city. It's pretty generic, but the essence of D&D. Where the setting shines is when you expand outward beyond that and look at the classic adventures. They're iconic for a reason. Monte Cook distilled it in Return to the Temple of Elemental Evil. Bruce Cordell distilled it in Return to the Tomb of Horrors. If anyone could get Greyhawk right I think it would be Goodman Games (I'm such a shill).

I played in Greyhawk in High school and ran Greyhawk for a year in 98 and then when 3e came out. We switched to FR when the FRCS came out though and went back to Greyhawk when I launched my fourth 3.5 campaign, with a bit of Planescape. I just find Greyhawk more interesting than FR or the other settings because it isn't crusted with all the bits and lore and fan rage if I change a bauble here or a nobble there.

I ran a long-term campaign in the 80s and 90s taking a group from 1e to 2e involving some of the Temple of Elemental Evil, the Slavers modules, the City of Greyhawk sheet adventures, a couple C modules, the entire Falcon series, some stuff from Greyhawk Adventures, and even two of the levels of the Castle Greyhawk humor adventure supermodule done fairly straight (they fought the Mind Fileter and recovered the artifact Mithril Breadknife of Greyhawk).

I am currently running a game in the GREYHAWK setting for nearly a year now with the party venturing into Verbobonc as we speak.

When I ran a throwback 1e campaign... I started to type "a few years ago," but it's been almost a decade ago now, I set it in Greyhawk, using the Greyhawk Folio.

Back in my sweet sweet 3E days.

I did play a whole session of Living Greyhawk once.

But frankly I know so little about Greyhawk as a setting that it's possible I did play in a Greyhawk game and didn't notice.

I'm currently running a Greyhawk campaign, using the 1983 Gygax box set as my base (modifying a few things, filling in some other things, etc.).

Right now the characters are in Hommlet, trying to clean out the Moathouse...

My early DMing career was all set in Greyhawk, in the 80s and 90s. I took a long break from RPGs and have been using homebrew since.

I was HEAVILY involved with and ran games in Greyhawk regularly (about 20 years) until I got more involved in Living Greyhawk. That ended in 2003.Then I switched to Hyboria and WFRP for a long time/18yrs.
Recently, I've only run short campaigns for my kid and his friends and anything I run 5e is Gh.

TYVM for posting this Allan!

The blunt answer is YES. My Order of Ulek Campaign is in its 42nd continuous year, and we are on Adventure #968; estimate is 3,250 sessions. We have multiple adventuring groups, and special groups that get together every few months that include Ed Greenwood (yes Ed plays in my Greyhawk Campaign, in fact next session is Sat evening, Sept 10th), Eric Boyd, Luke Gygax, Anna Meyer, and many other personalities from entertainment and the Twitch Live Stream Community. Greyhawk is such a rich setting, yet there is room to grow and "Make it Your Own", as Gary Gygax once stated. Also, the Community has multiple bloggers, multiple Discords, and many Twitch Live Streamers. We have our own Con as well Virtual Greyhawk Con 2022! Reach out to me if you are interested in participating or joining this vibrant, ever-growing Community!

Not yet, no, but I have me some ambitions.

billd91 said:
Greyhawk is my preferred default setting for D&D.
Click to expand...

teitan said:
GH is kinda meat and potatoes but also has its own flavor too. Its sword & sorcery, Fritz Lieber with a bit of, well, what we would see as The Witcher, and some Lovecraftian elements, especially coming off the Wars era into Living Greyhawk.
Click to expand...

teitan said:
It's pretty generic, but the essence of D&D. Where the setting shines is when you expand outward beyond that and look at the classic adventures. They're iconic for a reason. … If anyone could get Greyhawk right I think it would be Goodman Games (I'm such a shill).
Click to expand...

Totally agree with the parts I quoted.

Greyhawk is the origin of D&D, so it’s just regular D&D, because everything else was played later. Ed Greenwood had FR in mind before D&D, and Dave Arneson played in Blackmoor first, but Greyhawk was the home world of the first generation of both game designers and players. Everything else was in its wake.

Greyhawk was the setting of the first D&D game I ever played (1st edition AD&D, in the early 80s), and those sessions set my mental template for how to run the game. When I was in art school in the early 2000s I ran a short-lived D&D 3.5 campaign called Pirates of the Aerdi Sea which fell apart due to student workload, too much ruins-exploring and not enough high seas piracy (my fault), and player infighting (not my fault). I still have the banner I made for the promotional flyer:

When Gary Gygax died, I ran a brief adventure or two set in and around the City of Greyhawk in his honor, but it didn't last long. Years later I started running weekly RPGs with my friends online. Starting with a Birthright campaign, I later sat down with Matt Finch's Tome of Adventure Design and generated nine old-school adventure module titles, just for fun. Immediately I got ideas for all of them and started jotting down notes. By the end of the day I had a nine-volume Greyhawk campaign centered around the Yeomanry League. We're currently 3/4ths through the second module I planned, having played our campaign weekly for about three years in real time by now: 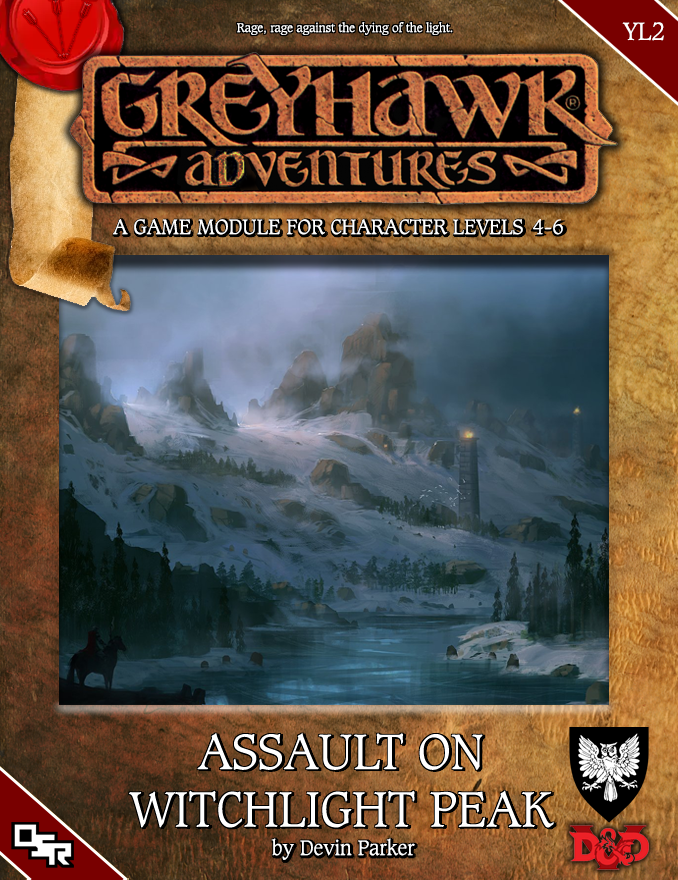 payn said:
Back in my sweet sweet 3E days.
Click to expand...

D&D General "One or More NPCs Associated with a Pre-Published Setting have Appeared in a D&D Campaign I have Run or Played In." (a poll)
2