The sudden quake caused Glau to jiggle like a bowl of jelly. Unable to stabilize themselves due to the extended pseudopod, the plasmoid topples into a heap alongside the Gnome and his dragonfly.

"Capitan? Are you hurt? Should we get back to the ship?"

As Phlox begins to feel the rumbling, he relaxes his knees slightly and uses the undulations of the earths to fall down into a tumbling roll and use his staff to vault back to his feet.

Phlox sees the people around him, scattered like twigs with some crying and injured; but his is not the place to help. Such was the command of the order. This is the way.

Instead, Phlox began to look around, attempting to discern if he could head any additional noises, or see smoke, or determine where more disturbances might be coming from.

The Captain had kept her feet as the ground shook under her. She nodded to Glau and said, "Yes, we should return to the ship and recall the others, but let's see if we can help out a little here first."

She helped Gunther to right his fallen cart while introducing herself, "Elaina Sartell, Captain of the Moondancer."

Steve flew up into the air, while Nic directed the construct. There was commotion everywhere - people running, alarm bells ringing. From his aerial vantage, there appeared to be more damage to the buildings uphill to the north than there was southwards.

Phlox observed the crowd, but as he saw no sign of the plague, or any obvious source of the disturbance, he continued to quietly watch.

Supporter
The falling sign glances off Sanderson's shoulders, and the lare lizard is knocked to the ground. The silence that follows suggests an immediate tranquility, before the shouts for help begin.

Sanderson gets up, and says "People need help." He expects everyone who can to do so, and immediately heads towards the screaming.

Normally sure-footed, the sudden tremor took Gunther by surprised and he stumbled and fell behind his counter. Cursing, he rose to see the officer already moving over to help right one of his carts. "Thank you, Captain." Seeing many other citizens down and hearing calls for help, he the added, "Let's see if anyone is injured." He then moved to join the lizard folk to administer aid where he could.

Delphne has no issue with the shaking but it does worry her. She remains where she was leaning unless it seems like she has to help out.

Nic was naturally excitable, and the quake only exacerbated this trait. Steve landed back onto Nic's shoulder and seemed to whisper something in his ear, then Nic patted him and he flew up again.

In one stream of consciousness he said: ''This is so strange, the ground never shakes here, Glau really nice to meet you but we'll need to talk more a bit later, but now people need our help, we should head uphill, the building there are damaged and people may need our help. Come with me all of you, come now, we need to hurry. ''

Charlie braced himself as the ground began to shake. Years on the open seas allowed him to keep his balance and he deftly sidestepped the falling sign. He looks up to the injured woman and the collapsed building. He moves to help the woman as he scans into the building. He pulls out some linen and presses them to a wound on the woman's head.

He asks checking the woman for any more serious injuries. She nods shakily dazed and hurt but not in any immediate danger. He leaves her leaning against a stall and moves to the entrance to the tavern. Charlie peers through the smoke and rubble hoping that the building is stable and no aftershocks would occur. He curses under his breath and enters the tavern looking for any survivors or those he can help.

"Aye, Capitan!" Glau responds by standing themselves to attention, then helps any nearby bystanders who have fallen by picking them back up onto their feet.

After helping nearby people to their feet, righting carts, and tending to the injured, Nic (who had been eager to travel north the entire time) began to gather as many nearby allies as he could to head northward through the arch.

Charlie had helped the woman struck by the sign to get out from under it, and now he was pulling a drunken sailor out from under one of the tavern's tables, closest to the door. The roof had collapsed and one of the sailor's mates was certainly dead, but this fortunate soul had fallen out of his chair with the shaking and had rolled under the table, which had saved his life.

The ground suddenly shook once more. Unlike the first time, where it had been a sudden rumble, this was more akin to a single powerful lurch. The tavern threatened to collapse entirely, and Charlie led the sailor (and a few more tavern patrons) out onto the street.

As Nic's group worked their way uphill toward the arch, commoners ran toward them in a panicked mob. Behind them, raising up over the buildings was a crystal vine - enormous, writhing, and growing larger as it flailed about. It twisted and swung over the rooftops, smashing its way through a bell-tower and throwing bricks for several blocks around. 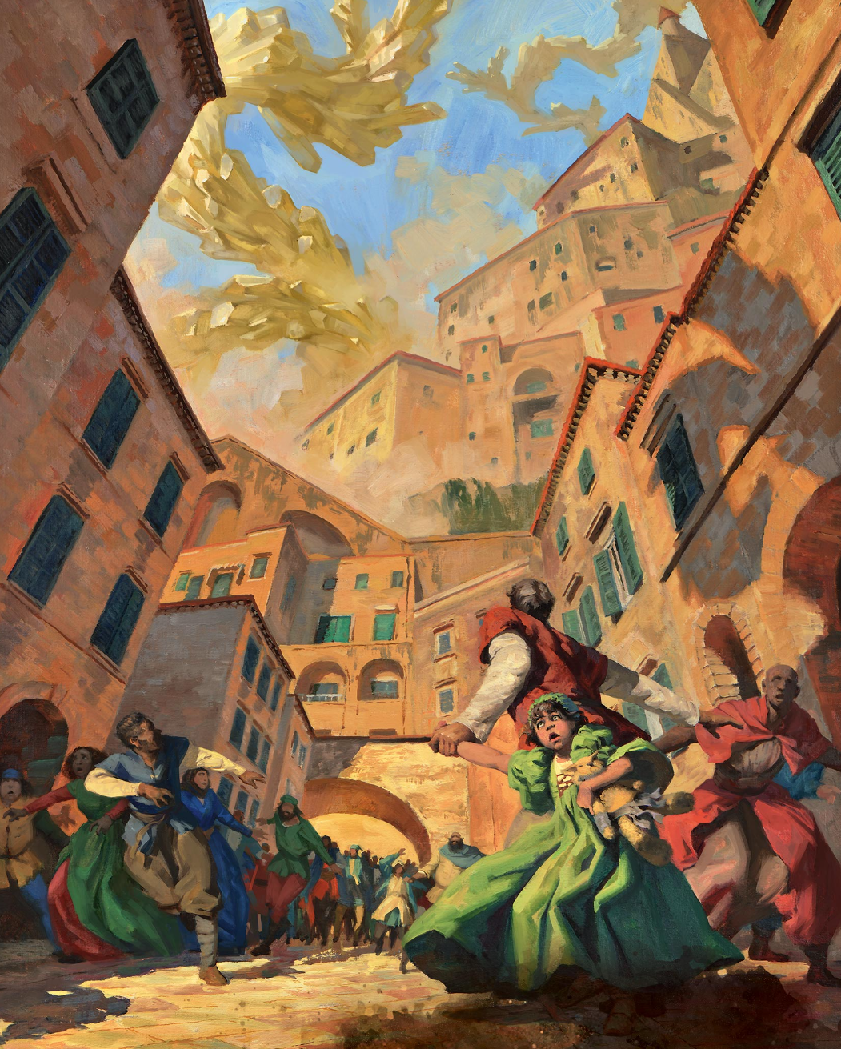 Gunther looked up after steading himself on the lurching pavement. "What in the nine hells is that?!" he exclaimed. It was as if a giant squid was dipped in rock salt and took up swimming in rock instead of the sea. Seeing Nic hurrying towards it, he sprinted after the small gnome, knowing his skills might be needed to defend the City. It was well known how dwarves were natural sprinters, and very dangerous over short distances...

Supporter
Sanderson looks up from the woman he is helping. The vine bursting up into the sky draws his eye, and so he does what he can to ensure she is stable, and then rushes to face it.

"Stay here. I wish I could promise it would be alright."

If Glau had a jaw, it would be hanging agape.

"Capitan, I think they are going to need more than a little help here..."

No, no, no, no! That is not good!
Nic states the obvious after seing the cristalline vine. Surprisingly, he takes a breath and focuses and for a moment, he seems to be in control of his anxiety.

Phlox's years of training had the desired effect- very little moved or surprised him. Even so, behind his ever-present mask, he could feel his eyes widen slightly and his face slacken somewhat ... this was nothing he had seen before.

Phlox knew that his order's remit was incredibly narrow. The Lazzar were ordained for the sole purpose of preventing the spread of pestilence and disease. Yet, just as he made offerings to Incabulos, so too were offerings made to Zuoken. The monstrosity he saw offended his sense of order.

After an eternity of inner turmoil, but the barest split second of hesitation, Phlox bound forth toward the disturbance. He had always been the swiftest of the Lazzar, and he turned his speed toward the chaos emanating from the North.

Charlie helps the patrons to a section of the street away from any building. He looks to the sailor and the others.

"Stay away from the buildings until we know that the quakes are through. Once it is safe we need to begin clearing rubble looking for..."

Charlie's voice trails off as he sees the crystalline vine raise up in the distance. Without thinking to much he speaks the words of a spell and protective force shimmers around him. Charlie then runs in the direction of the arch and the strange vine writhing in the distance. At the same time the strange monkey leaps form Charlies shoulder and the strange lumps on it's back open into wings and it takes to the air. Jak-Jak circles once overhead then heads in the direction of the disturbance.

Nic was so frustrated that he knew nothing whatsoever about this enormous crystal vine, that he vowed that he would do better in the future.

William reached into his purse and after a moment of thought tossed the woman a gold coin. "Thanks ma'am." Anxiety and guilt knotted in William's chest as he rode towards Devin. He could still hear the crunching sound as Devin's nose broke, and see the blood mixing with tears on the boys face. Worse still, could remember wanting to keep hurting him even after.

William took a deep breath and tried to clear his mind, but a part of thought about turning around and running even as he climbed down and screwed up the courage to get Devin's attention. "'Scuse me Devin, I know you probably don't remember me but-"

The earthquake cut William's efforts short, as he went ass over tea kettle and only narrowly avoided being set on fire as hot coals skittered past him. "Darn it, this's even worse than I thought this'd go" William muttered to himself as he climbed to his feet and began doing his best to stamp out the fire. By the time he'd managed that and made sure Devin was alight the ground shook again and a crystal vine filled the sky. William pushed his ears out of his face and sighed. "Have to do the short version then. I'm Sweet William, same one who broke your nose. I'm sorry for that, it didn't need to go that far. I was just mad that you kept calling me Sweet William and the nickname stuck. Sorry for everything else I ever done to you, and your friends too." William handed Devin his coin purse. "I know this don't make us even, and I wish I had more time to talk about it but..." William gestured vaguely at the crystal vine as he climbed back onto his mount. "If I survive this I'll come back and we can try this again."