Brother Phlox ran uphill past the group that Nic was organizing to go take a look at the trouble to the north, but was slowed by a group of panicked locals who poured through the market archway, heading downhill.

They were pursued by strange, crystalline humanoids who were mixed in with the crowd. Phlox and the others watched as one caught up to a woman and wrapped her with shining, sinewy vines that seemed to choke her into unconsciousness. As she fell, similar vines burst through her skin, wrapping her body, and she rose as another of the creatures, which turned on the nearest civilian.

The massive vine to the north appeared to be growing still, and it towered over the city, writhing and twisting. It swung low overhead and many people screamed and ducked reflexively. To the south, closer to where Charlie, Sweet William, and Delphne were, two more of the vine-creatures dropped off of it and crashed into the ground, then began to rise. 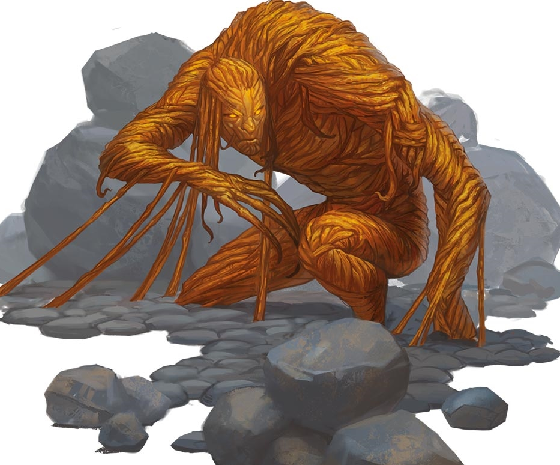 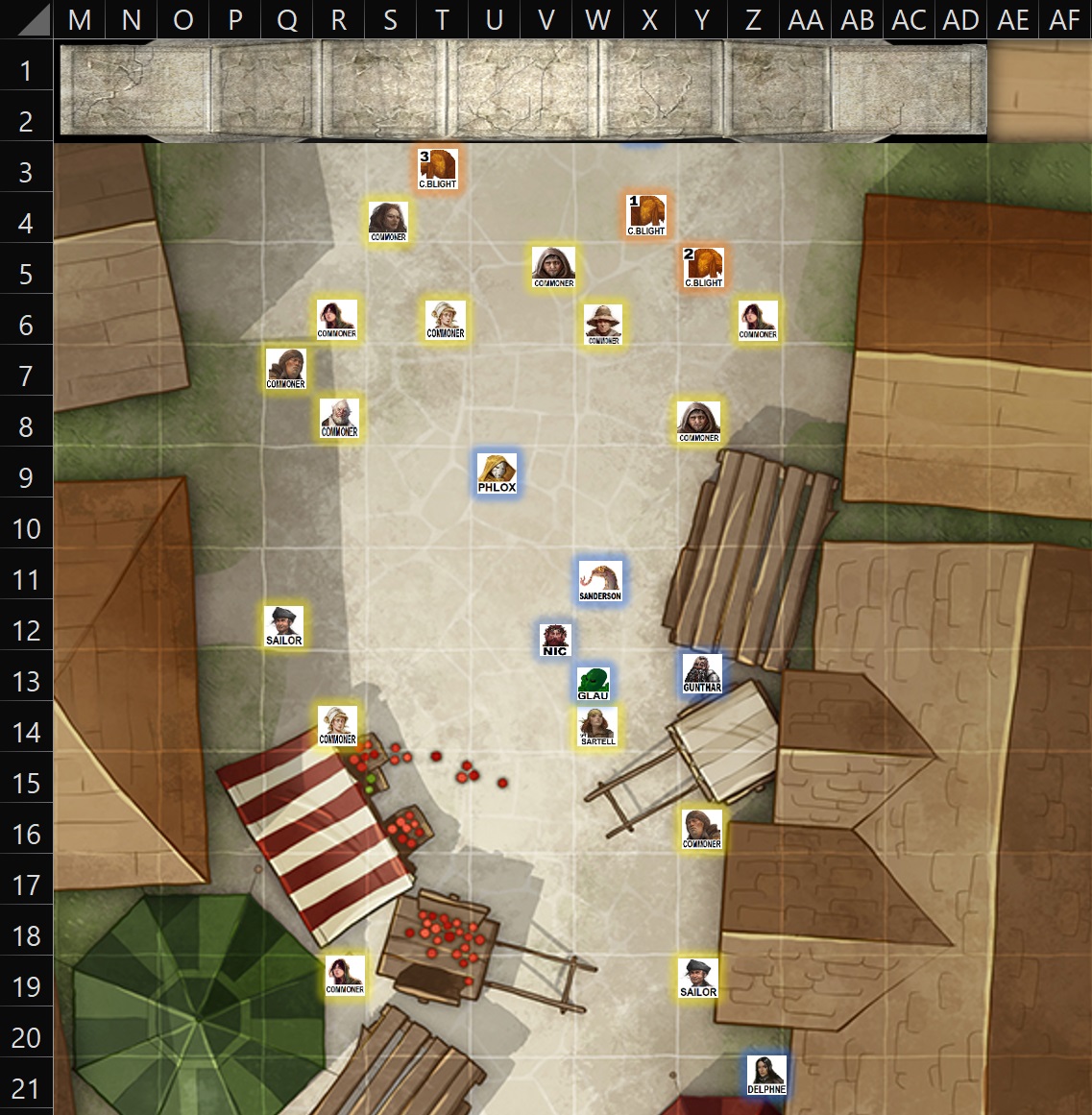 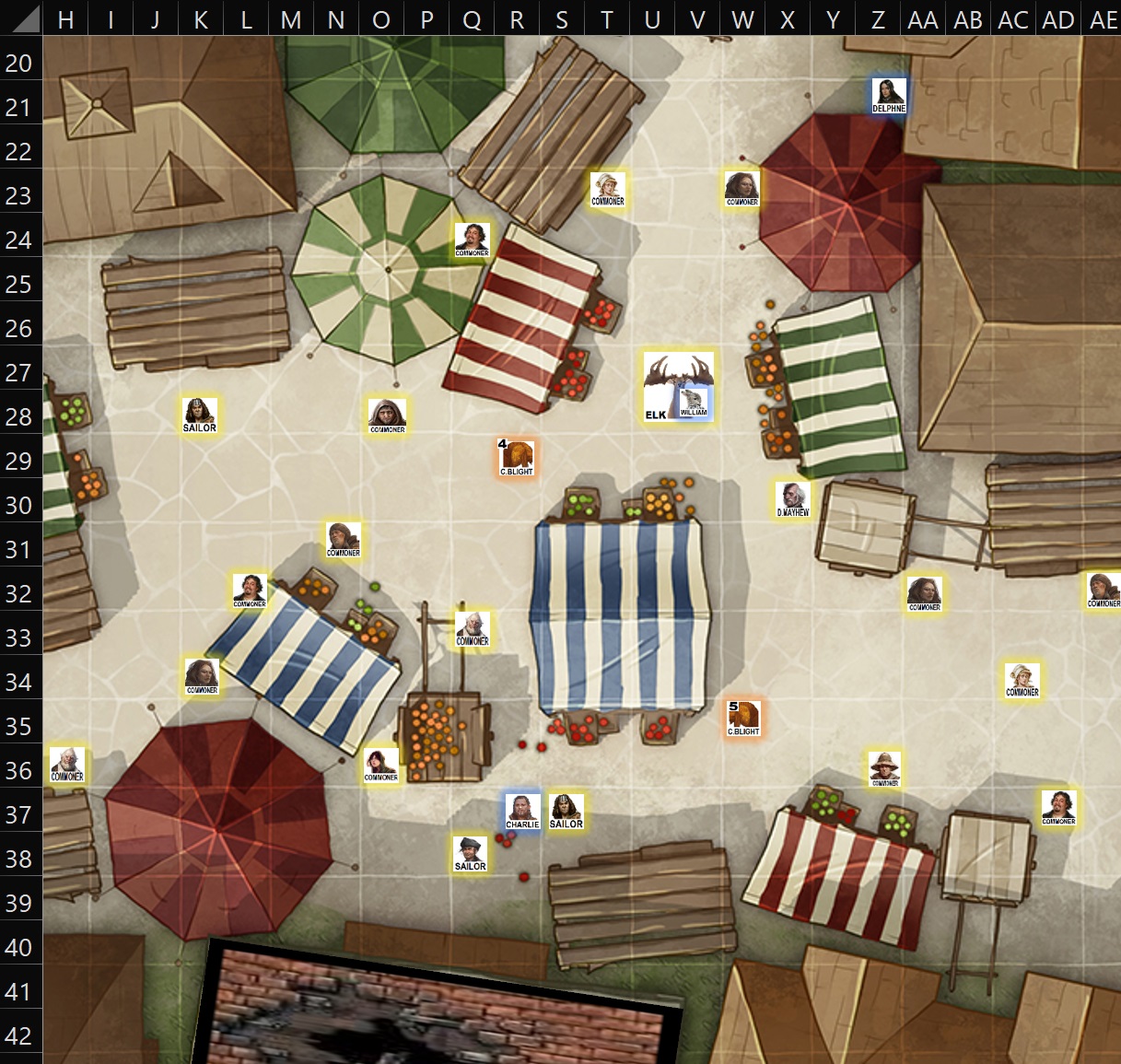 Gunther was done being surprised anymore. These creatures - whatever they were - were attacking his city, his livelihood, and perhaps most importantly, his peaceful retirement. They needed to be put down, and quickly.

Moving against the flow of citizens, he positioned himself near a capable looking masked humanoid. Hoping the cloaked figure was on his side, he then squinted at a nearby crystalline creature and called upon his senses to mark it with a word. He then pulled out a bit of fishing line with a nasty barbed hook and called upon the primal powers of the sea to then whip it towards the thing, snagging and tugging it towards him.

Supporter
Sanderson steps forward and holds his hands together, thumbs touching. in the space between his scaly indext fingers a flame appears and it continues to grow until a sheet of fire extends forth, hitting two of the newly arrived creatures.

"Sssstand behind me," he tells the villagers, and with a gesture pulls the nearest commoner mystically away from danger.

More comfortable fighting strange creatures made of vines than awkward conversations with old rivals, William directed the elk to the nearest blight and lashed out twice with his sword.

Phlox watches as the crystal seems to spread, corrupting and changing the people of Kingsport. There is only one word for this ... contagion.

He was always a little more reckless with his remit than the other monks, but now he could defensibly move into action. For with contagion, there was always the same solution; preserve the healthy by removing the disease. Phlox saw one of the infected approaching a commoner and sprang to action, using his training with his plaguestaff to force the blighted creature away, while using his speed to remain out of the reach of further contagion.

Charlie turns and looks at the strange vine creature that just crashed down near him. He turns to the sailors next to him.

"Find cover, neither of you are in any shape to fight."

He makes an arcane gesture and speaks words of power and two blue luminous bolts of force streak from his hands to strike the creature. At the same instant a spectral tentacle raises out of the ground next to the creature just struck and wraps around the things leg. As the tentacle makes contact a jolt of electricity courses through the creature. Charlie makes sure the target is down before moving between the stalls towards the other creature.

Glau quickly reaches out to arm themself with anything they can get ahold of. There was a stool nearby, from where a merchant was sitting before the quake. And just over there, a bucket. It would have to do. "Capitan, we need a plan here!" they called back.

And then something downright strange happened. The plasmoid's membrane rippled with violence, changing their smooth green texture into a bubbling red one. Even more shockingly, a large spike protrusion erupted from their small body. This wellspring of destruction was pointed in the direction of one of the crystal humanoids. The spiked appendage missed, but the defending creature was thrown off-balance by the dodge. Allowing Glau to shove the stool into it's abdomen, and follow up with a bucket shot across the face.

Nick grabs his shield, and moves forward, blasting the creatures already hit by magics and attack, hoping to down them. He yells to the villagers ''Behind us, quickly!''

While the crowd of panicked citizens fled downhill southward, a few brave souls rushed uphill against the tide. Brother Phlox saw contagion, and where there was contagion, it was his duty to stamp it out. He struck one of the crystalline creatures with his staff and foot, and it stumbled away as he retreated downhill.

Gunthar and Sanderson moved northward together, somewhat getting in each other's way. The serpent-folk conjured a burst of flames that covered two of the creatures while a civilian was sent free of the blast. The old dwarf flung a line and hook into the receding flames and pulled a smoldering creature toward himself.

Captain Sartell told Glau, as the plasmoid gathered a bucket and stool, "We'll take a moment to see if we can't help a few of these folks and see what we're dealing with, but I plan to return to the ship as soon as possible. We need to call back the crew on leave."

The little green man turned red and spiky, and he slid uphill faster than his little legs ought to move. The captain followed, and they took on the two creatures that had been burned by Sanderson's flames, both downing the creatures after several blows.

Nic followed, calling to the townsfolk while getting his shield out. He charged up a gauntlet and fired a bolt of lightning at the creature that Phlox had caused to stumble, and it cracked in the middle and fell to the ground.

The enormous crystalline tentacle grew ever so larger overhead, and it swung about, destroying a tower and scattering stones for hundreds of yards. One such stone fell toward the group that included Gunthar, Sanderson, and Captain Sartell. It smashed heavily to the ground as they scattered to avoid it.

The crowd of commoners fled southward, but even as they did, more townsfolk fled from the north, pouring through and under the market archway, followed by a few more of the crystalline creatures.

Further south, Delphne had reacted quickly, crossing the market street and ducking between stalls. In the middle, she sent a bolt of fire that burned and distracted a crystal creature while it was rising from having fallen from the sky. She readied her weapons from a hidden spot, while Sweet William rode his Elk in a charge at the same creature. The rabbitfolk leaned down from the elk and swept his sword it two deft strokes that cut the creature down before it could do harm.

Charlie caused a seaweed plant to grow up out of the street's paving stones. It wrapped at a crystalline creature's legs and shocked the thing while Charlie sent two bolts of force at it. The creature stumbled, injured, but it was still able to wrap its crystal vine-like tendrils around a fleeing merchant, who fell to the ground and then began to rise as another of the creatures.

Jak jak flew upward, chittering in excitement about the terror all around them. Many of the market-goers fled eastward and westward, or cowered under or behind the stalls and carts. 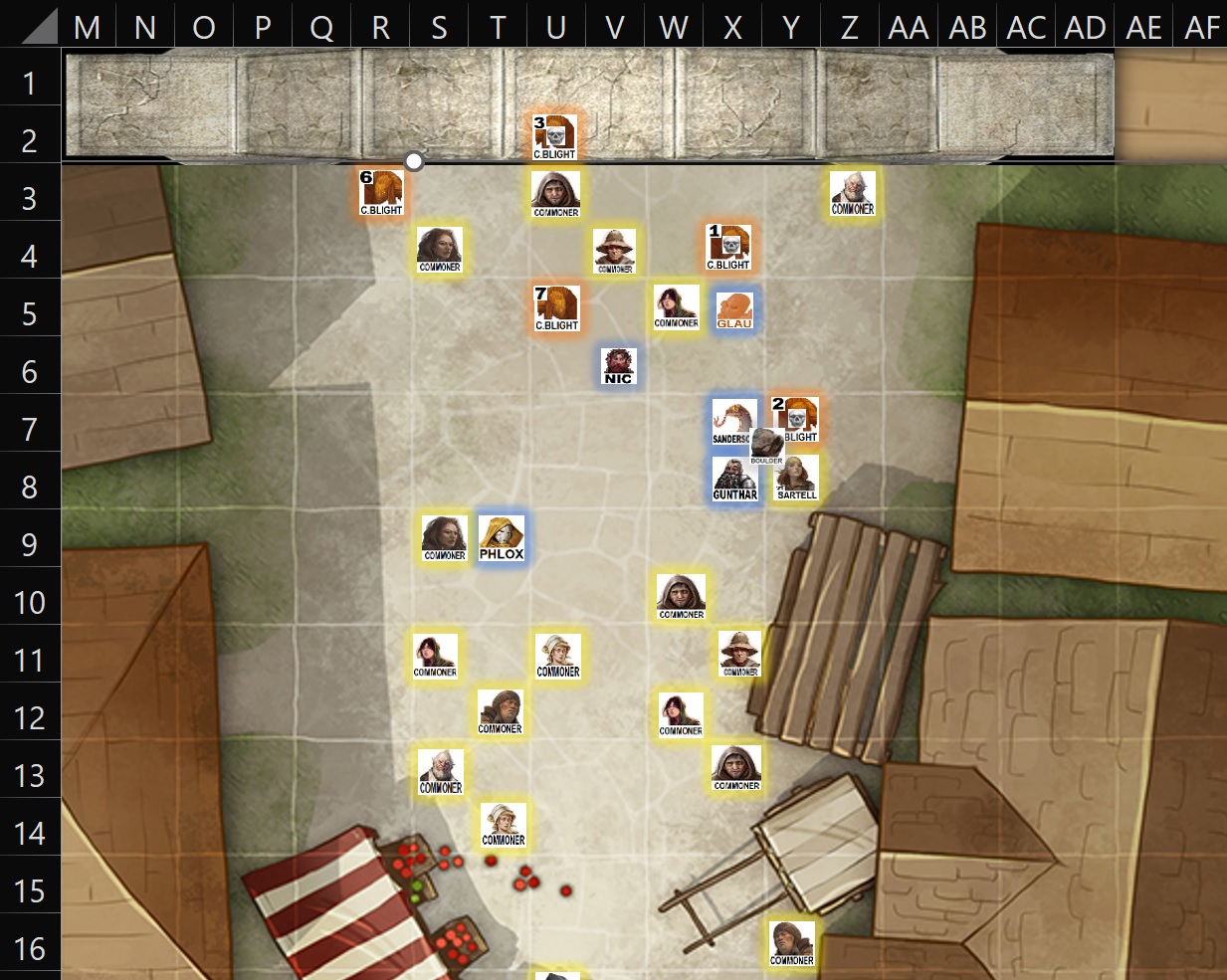 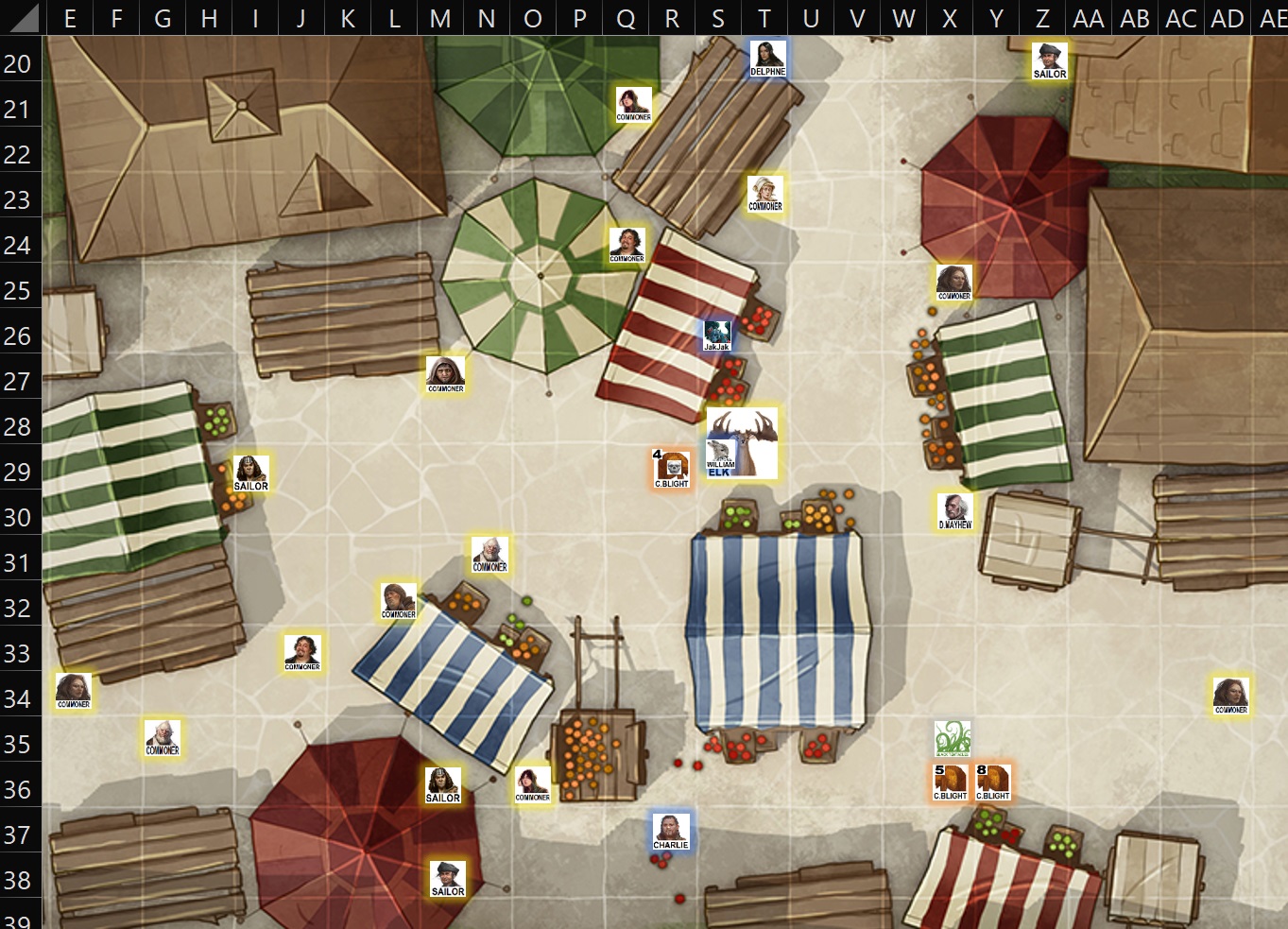 Sweet William glanced at the crystal vine as it did its best to destroy the town. It'd been a few years since he called Kingsport home, and it hadn't been much of a home even then, but seeing it torn apart caused his temper to flare. He narrowed his eyes at the two crystal creatures and the elk ran toward them, sensing his intent. William cut one down and struck the other with about as much force as he could.

Phlox quickly reassesses the situation, seeing the possibility of further contagion. He sprang into action hoping he could continue to limit the spread. He rushes effortlessly to confront the source, attacking it with his plaguestaff and kicks. Concentrating on making sure the infection doesn't continue to spread, Phlox channels the teachings of Zuoken so that after the diseased entity is struck with the plaguestaff, Phlox lands several spinning kicks before gliding back to near where he started.

Nic eyes the crystal creature next to him, he voices arcane words while manipulating the weave with his free hand and conjures arcane geometric symbols below it, that spring forth a sizable fire

Jumping clear of the falling debris, Gunther looks around to see another creature engaged with Nic.

"Hullo again, Nic," shouts the old fishmonger above the commotion as he engaged in the melee. "Quite the morning, eh?"

He then swiped at the crystalline creature - who was now wreathed in flames conjured by the gnome - with his longknife and fish-knocker.