D&D Movie/TV Joe Manganelio is Writing the D&D Movie? And Is it DRAGONLANCE?

Actor Joe Manganelio (from True Blood, Magic Mike, and more) appeared on the Happy Sad Confused podcast this week, and reported that he is co-writing a movie script. While he doesn't namecheck D&D, his description sounds a lot like it, and he did recently meet up with WotC. "Last year with a playwright I went to Carnegie Mellon with, I actually made a draft of a film, and now we're talking to all the right parties. I had a two-day creative summit with the Wizards of the Coast...we had like a two-day summit about where the movie could go or TV series, products, synergy, the whole deal… Obviously, there's a spectacle. There's dragons breathing fire and lightning. But what makes a great superhero or fantasy movie is the human aspect. It's got to be about something. We root for those characters in Game of Thrones. Fellowship of the Ring was about friendship, this undying love for your friends. That's something everyone can identify with. When a movie is about something human and real emotionally people are going to want to see. Then you get some dragons breathing fire, and hey, I'm in." And to add fuel to the fire, he even tweets a photo of a DRAGONLANCE script! (thanks to darjr for the scoop) 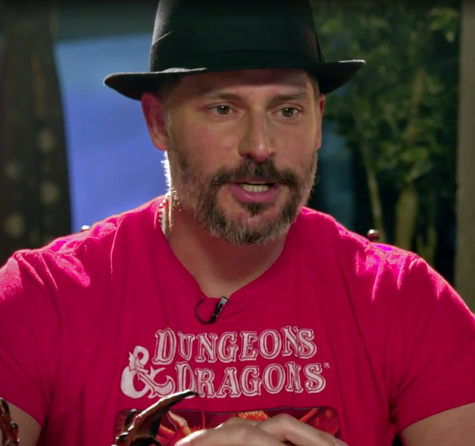 The D&D movie is being directed by Rob Letterman (Goosebumps, Monsters vs. Aliens, Shark Tale), produced by Rob Lee (The Lego Movie, How To Train Your Dragon) and was/maybe still is being penned by David Leslie Johnson (Wrath of the Titans). Previous reports indicated that "This new Dungeons & Dragons will be a Guardians of the Galaxy-tone movie in a Tolkien-like universe. Because when you think of all the Hobbit movies and The Lord of the Rings, they have an earnestness to them, and to see something fun, a Raiders romp inside that world, I feel is something the audience has not seen before." and that "producers are eyeing a Vin Diesel-type for the film’s lead characters".

Of course, we also know that Vin Diesel plays D&D, as does Joe Manganiello.

So is he co-writing the D&D movie or is that something else? To add to the rumour pile, he tweeted an image of a DRAGONLANCE script (shown below). Of course, he could be playing with us. But maybe there is something in it? His name isn't that script, nor is David Leslie Johnson's. Let the speculation begin! 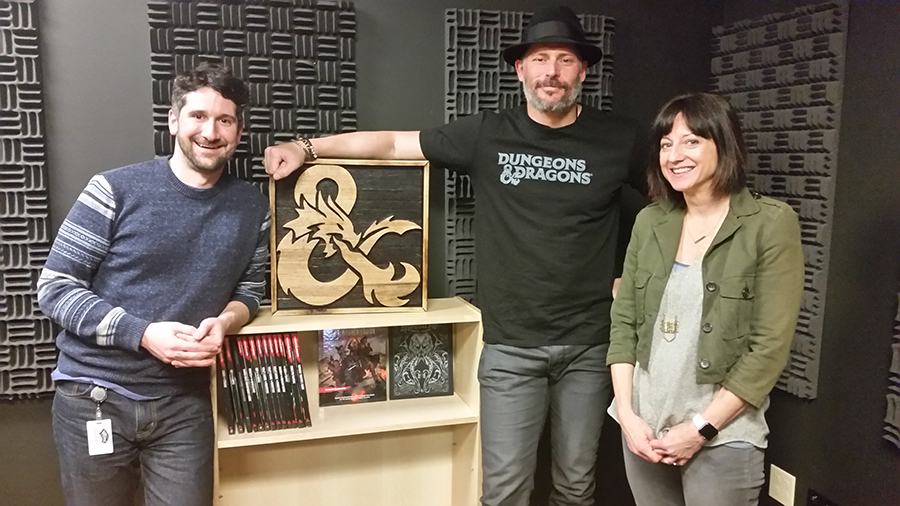 Manganelio at WotC in February 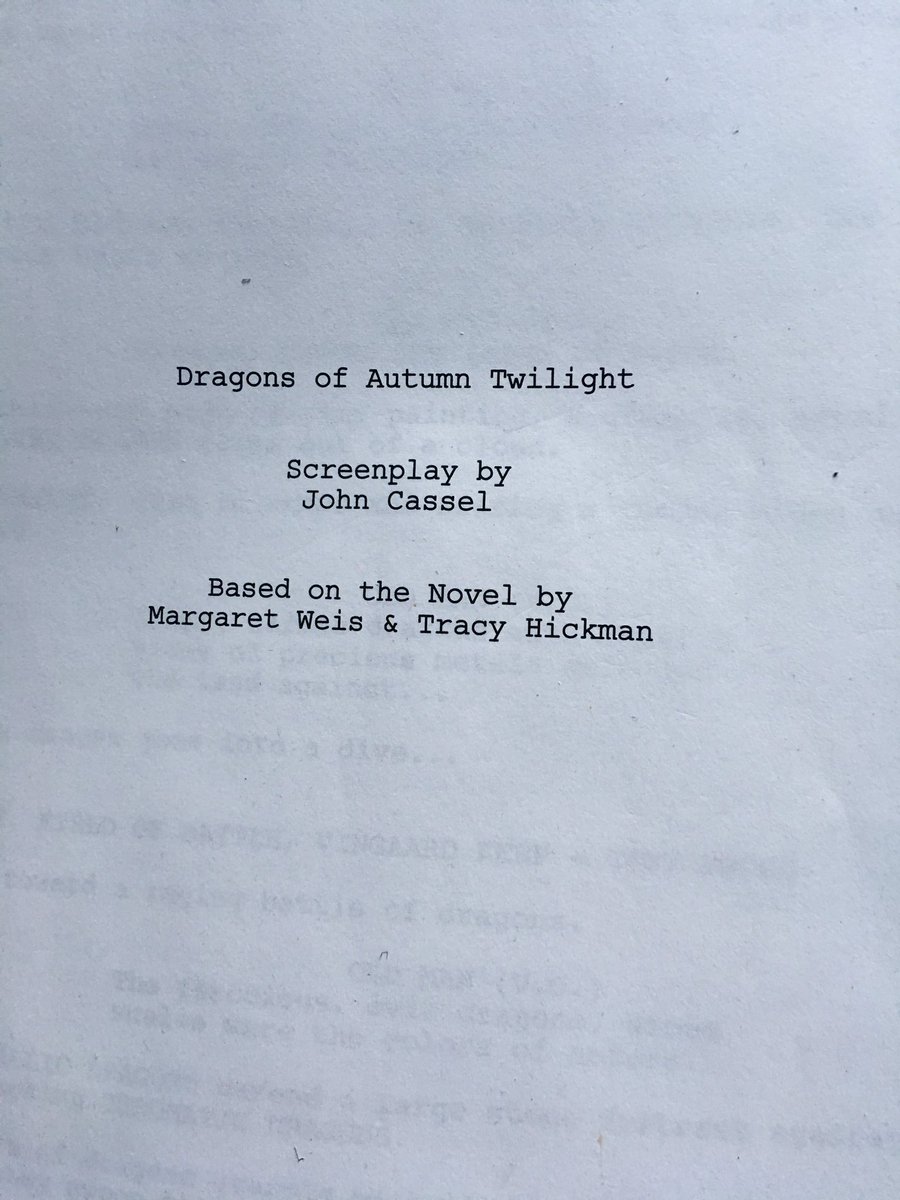 This is great news! I wonder if he'll be in it as well?

But otherwise, exciting. I mean, kinda. A lot of the description in that "guardians of the galaxy tone" makes me cringe. But so did the first trailers for GoTG, so we shall see.

And everyone would like to capture the Guardians of the Galaxy magic (take niche-IP, transform it into box office gold).


Everyone gets all of that. None of it makes the quote less cringey, or means this will be good.

The D&D movie will not be 'good'. It MIGHT be mildly entertaining. Maybe.


Sent from my iPhone using Tapatalk

The good news? Whatever he writes can't be worse than the previous D&D movies!

I want an Eberron Uncharted style heist/adventure movie more than anything.

This looks like Joe isn't involved in the already announced movie. He is trying to pitch his own.

lowkey13 said:
Well, let's break this out, shall we?

The best way to monetize your IP in film is to create a sustainable franchise.

Now, there are almost no examples of "Big Successes" that don't follow the leader. There are "art house" successes (Her, Primer, Under the Skin) in science fiction. Not great examples for fantasy. But still, you'd have to go back to Star Wars (which kicked off the franchise) to look for something new; and you don't have to be a film buff to understand that the movie heavily cribbed giant portions. So, again, not new.


And some movies that I'm not sure you would even classify as fantasy (Sixth Sense, Jungle Book, Bruce Almighty, Up).

Excluding the four "non-fantasy" movies, every single movie is part of a franchise. Some barely so (AiW). But still. And they all followed the leader.

THIS IS HOW MOVIES GET MADE NOW.

Now, if you want a good movie (special effects????), you need financing. No one is going to finance a movie unless they have a good idea that it is ... following a leader. Hollywood is risk averse in that way.

Not to mention, again, this is how they pitch movies ("It's like Donnie Darko meets Pluto Nash!"). So what you should concentrate on is the finished product. Within the system, assuming good financing, you can make a good movie, a meh movie, or a bad movie. Hope for the good.


I hate repeating myself.

Everyone understands all of that information.

I'm not sure what part of my post wasn't clear? Some part of it wasn't, clearly, but I can't tell what, exactly, caused you to respond with basically the same thing you'd already said that I didn't even comment on.

Also, the dude has a hardcore Miniatures collection.

I just hope that he doesn't use a generic setting. A more lighthearted LotR inspired movie (tone-wise) would be totally fine. But please... no magic powder this time!


But all of those (except Pirates) were loved stories (yes even Twilight ) before they were movies.

Unless the filmmakers can pull off another miracle like Pirates (which was very considered a likely bomb until word of mouth reversed the expectations) I'm not optimistic. And they've had a few goes already.

In my mind it has to be light hearted and witty - come for the laughs, stay for the adventure. If they go epic, it better be bloody epic!

I'm not going to lie, just knowing that Alcid is into D&D is really making my day XD

robus said:
But all of those (except Pirates) were loved stories (yes even Twilight ) before they were movies.
Click to expand...


Another example of how Hollywood is risk averse. If it's making money in another medium it's a safer bet. Hell, 50 shades is a great example. They made a second despite the first being such a flop because people ate up those books.


I still don't know why but that's an entirely different conversation haha.

Vicar In A Tutu

I don't think anyone expects the D&D film to provide cinematic art. If only they could make a well-crafted fantasy blockbuster, that would be amazing. But I have my doubts.