Level Up (A5E) Level Up: Advanced 5th Edition Is Coming!

Level Up is the working title for a standalone 'advanced 5E' backwards compatible tabletop RPG coming to Kickstarter in 2021 from EN Publishing. 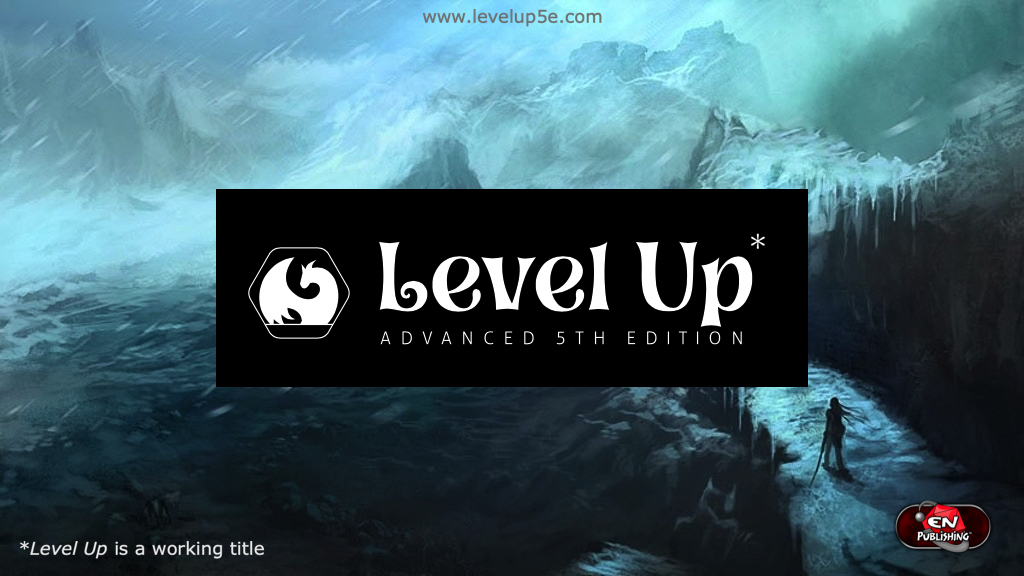 A crunchier, more flexible version of the 5E ruleset which you know and love. If you love 5E but would like a little more depth to the ruleset, Level Up is the game for you!

Level Up is the working codename for a standalone hardcover roleplaying game brought to you by the team which brought you EN5ider Magazine and Mythological Figures & Maleficent Monsters! This is an ‘advanced’ version of the 5E ruleset, presented as a hardcover standalone game. It adds more customization and depth to the game. Basically, it’s a ‘crunchier’ version of 5th Edition. It's still the game you know and love. We love it too! All your 5E books will be compatible with this new game.

We already have a list of what we want to include in Level Up, although this list is not yet final We’ll be using surveys to adjust that list. We hope to include a fully developed exploration pillar, flexible character choices at each level, a new approach to heritage, martial maneuvers, a ‘cinematic/gritty’ toggle, spell-less ranger and warlord, and followers and strongholds, and more. Keep an eye out for the surveys!

We are also recruiting a diverse team of expert 5th Edition writers. We’ll have more news on that soon.

Hehe. I look forward to playtesting this game. I have much higher expectations from the enworld staff so I'm sure it will be done quite well.

Hmm...I'll have to find a way to smooth it over with one of my groups, though.

Olgar Shiverstone said:
Will this be modular? Like take standard 5E but add in advanced character development options? Or will it be an all-or-none sort of thing?
Click to expand...

it is a stand alone product, not a set of variant rules. Though I’m guess it wouldn’t be to hard to use it as such

Mike Myler said:
I don't get any hits on web searches for "Goodman Games" and "Advanced Fifth Edition". On DriveThruRPG they have a magazine called Fifth Edition Fantasy. Is that what you were thinking of?
Click to expand...

Grimstaff said:
No, the name is “Level Up”.
Click to expand...

It was their 4E magazine. So the issues are older, but it is there in drive through. I found it with a search engine search for Level up and Goodman and it brought me to Drive-through.

It is surprising someone hasn't done this yet. I look forward to seeing what you come up - good luck!
Last edited: Aug 10, 2020

Supporter
AD5E works if you want to avoid that three letter acronym problem.

A running sidebar feature throughout the book with tips on how to use any new systems on their own would be great.

Or if side bars are not an option, maybe a classic appendix would be better.

So as an example, if there is a new initiative system with links to others parts of the rules, the tip gives advice on how to just use the initiative system alone - kind of like in the style of designer notes I’ve seen in some RPG products.

This way the book is a stand alone rule set, but can also serve as a collection of variant rule add-ons for those of us that want that. AD&D 2nd Edition dis this very effectively with side bars.

I’ll be supporting this regardless, but thanks for listening to the 5E fans!

What's the D stand for?

It's the D from advanced. Maybe that's cheating.

Morrus said:
That said, a big book of optional rules isn't what we're aiming for here; we're going for a single cohesive game you can pick up and play.
Click to expand...

Hmm...would it be fair to guess that while the intent is a cohesive whole of rules/mechanics, it could also function as a "buffet" of optional rules as well? (Buffet meaning pick and choose what you'd like to use, leave what you'd not like to use).

I plan to support it either way, just curious.

A running sidebar feature throughout the book with tips on how to use any new systems on their own would be great.
Click to expand...

One of the the things I love about Cypher system books is that when something is mentioned, the sidebar has a page reference to that thing (for the full monster write ups, or if the text mentions a specific about combat, a page number that details that specific). So much more useful than a standard appendix (thought I would want that too), as you can reference or not as you wish, but makes it flow better. And of course perfect for hyperlinks in a PDF.

When reading the rules, I thought "Why has this not been the standard for years".

Of course other standard sidebar info is also in the sidebars.

The concept could be interesting... good luck.

Lord Mhoram said:
One of the the things I love about Cypher system books is that when something is mentioned, the sidebar has a page reference to that thing (for the full monster write ups, or if the text mentions a specific about combat, a page number that details that specific). So much more useful than a standard appendix (thought I would want that too), as you can reference or not as you wish, but makes it flow better. And of course perfect for hyperlinks in a PDF.

When reading the rules, I thought "Why has this not been the standard for years".

Of course other standard sidebar info is also in the sidebars.

The page reference is great. Doesn't take much space so it's easy to ignore when you don't need it but really helpful when you do.

@Morrus out of curiosity, what made you decide to do a standalone product as opposed to a "Advanced Player's Guide" style book? I am not judging, by the way -- I am merely curious and I would guess that you considered both options before settling on the one.

They're asking whether the ruleset fits with the way the D&D Next playtest was usually described early on: comprised of "modules," relatively large internally-consistent rules chunks that can be inserted or removed smoothly to "set" a particular play experience, more or less. One of the key things that was frequently teased for 4th edition fans (though usually not with an explicit reference) during the Next playtest was the "tactical combat module," which would enable a richer, more involved combat experience (similar to that offered by 4e) without needing to make every table everywhere play that way. Each table could pick from the palette of modules to have the game experience they wanted, possibly choosing one of 2-4 modules that all fit into a particular category. For example, "resting and recovery" could have Standard Resources, Gritty Survival, High Action, Scarce Magic, or Abundant Magic; "combat" could have Theater of the Mind, Abstract Positioning (think 13A's range bands), and Tactical Positioning; "skills" could have Abilities Only, Simplified Training (4e-style or kinda-sorta current 5e style), Skill Points (3e-style), or Custom Backgrounds (13A style), with Tool Proficiencies as a free module that works with any of those options; etc. etc.

As WotC realized (but never openly admitted), developing a system that actually works and which accomplishes these goals is Very Difficult, and requires a ton of playtesting they were never able to do because they spent a year and a half just trying to get basic mechanics figured out. So I don't personally expect this, though if you did do it I'd be damned impressed.

And, if I may ask a question of my own:
Will you actually recognize that 4e existed and had good ideas worth preserving? Because it would be really really REALLY REALLY awesome for someone to make a game that treats 4e as a valid, fun game in its own right and gives it a breath of fresh air via 5e-affiliated supplements.

To be honest, I am still a little bit sceptical about this endeavour and its goals. Should it be 3.5ish / PF1ish? I like lean rules systems these days but some things could be more crunchy in 5e:

If it includes things where Fighters actually hit better than others (in otherwords, more like expertise for weapons for Martials), Harder hitting spells, more flexibility for Monks, and actually advanced type rules (like an AD&D) I think I could be in on it.

On the otherwords if it is just more of what everyone else is offering, which is basically more options of the same things that we already get (look, yet another archetype for the Bard, and another bunch of spells for the wizards...etc.), I think it's a hard pass.

Normally don't go for third party stuff, but if it really will be the Advanced to 5e like Advanced was to BX or BECMI...that could be interesting.

You mean you're going to take the theme park and actually turn it into a sand park game with real player agency in character choices past 3rd level?

This might actually be a version of 5e that I can like. The only other version of the 5e chassis I like is the Stargate rpg that's being worked on.

what I would like to see in a version like this, is more control of skills. Skillpoints at every level for all classes, and not instead of other bonuses or option that you would get there.

Is the basic idea a no-magic Ranger, or just a spell-less Ranger, because the two ideas are quite different. A ranger about 10% more supernatural than a monk, I’m all for. A fully mundane ranger seems...wholly redundant.