Jamir was feeling as good as new, but Robert was still suffering some minor injuries yet. The bard had gained some more experience though the battle and trying to heal.

“Do you have a wand of healing, Robert? I do have more spells, but not many.”

Jasmine joined Robert in searching the bodies of the wererats. The she quickly overturned the bedrolls too. She did not look happy after a quick look. "They do not have my stuff on them. Nor is it in the bed rolls. They have a leader around here somewhere, we shall have to find him."

There was no key or much of value on the dead. Their studded leather armor was nothing special, but their shortswords were all of good quality (masterwork). The had some coins in their pouches, but only a handful of gold and silver.

Code:
[/sblock] [sblock=GM Note]Minion foes (without names) I just kill off at -1HP. The wererats were all dead upon combat conclusion so you need not worry about the channel energy.

Treasure is likely vender trash so I will not bother listing the value. But if you need there are 4 Mwk Shortswords.[/sblock] 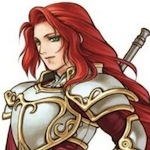 The flame-haired guard looks distressed. "I guess I should be happy it actually worked... but the priests are so much better with the direct-appeal-to-the-divine style of healing." Approaching Robert, Charity roots through her pack and pulls out a healing kit and a wand. After cleaning the woodsman's wounds up, she then heals him with the wand until he appears fully healed. Despite his apparent recovery, Charity comments, "Robert, simply cleaning the wound and healing over the top may not be enough. We'll want to pay attention to this one, it could be worse than simple rat fever."

[sblock=Actions]In order, but more than 1 round's worth: Tuck hammer under belt so it can be drawn normally, Retrieve items (kit and wand), Approach Robert (F-20), use healing kit to assist recovery from disease, Use Wand CLW (three times on Robert) 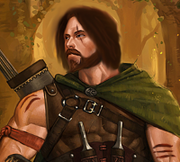 "Thanks Charity. We will worry about that after we finished up here." Robert replies. He then turns to Jasmine. "You recognize any of those guys? Or if not any number of people you would anticipate to meet here? Like Ratguy number seven and fourteen missing but who are usually on guard duty?"

Current Weapon in Hand: none

Jasmine nodded, "Yes, I recognize three of them. There is a fourth, their leader that is not here."

"That one," she gestured to the one Robert killed first. "I do not recognize him."

Code:
[/sblock] [sblock=GM Note]Robert is diseased and will need to get cured within 24 hours or become a wererat. Solved by going to a temple and paying for the spell after the adventure.[/sblock]
Last edited: Feb 2, 2015

Finished with Robert, Charity continues with herself. Speaking the magic word, the wand springs to life once more, providing wound-closing magic. Seemingly happy with the result, Cortesia's guard puts her healing kit and wand away and starts policing the north wall for her possessions. By the time she ends up next to the ladder, she has put her dagger back in its scabbard, picked up her pole arm, and retrieved and her light bearing stone. The stone she sets into motion around her head, allowing it to move with her. "Sorry, so much to clean up. I'm ready," she announces, turning towards the doors to the east.

"I am ready too. Lets see if the rats fled from the sinking boat." Robert replies and proceeds to take position next to Charity at the door.

Jamir and Jasmine nodded as well, the bard standing behind Charity and Jasmine behind him. Opening the door the light from Jamir’s ioun stone shined down a stairwell about 10 feet wide. At the bottom, several feet down it appeared there was another set of double doors. They looked closed from the top of the stairs.

Stepping down the first few steps, Charity looks into the gloom at the edge of the light. "Alright," she begins in a low voice, somewhat above a whisper, "stagger the group and head down." With that, she continues, the edge of the light pushing forward and illuminating more stairs as she descends, her pace notably slower than a walk.

"The ominous staircase down. Lets keep our guard up while traversing it. Don't want any traps sprugn in my face or slip because some Rat couldn't hold it in..." Robert remarks, eying the Stairs carefully. "No looks perfectly fine, follow me."

The Ranger takes the lead.


Robert will move downstairs but will wait till the light catches up so that the next 10 feet in front of him are lit....

or sth horrible happens to him

Without speaking, Jamir and Jasmine followed Robert and Charity down the stairs, the orbiting stone around the bard’s head illuminating the ranger’s examination of the floor as you descended. You reached the bottom of the stairs without something happening first to interrupt things.

You stood before the double door at the foot of the stairs. There was no landing and the doors opened away from you.

The ranger leans in closer to the door, carefully avoiding touching it so that they don't just swing open. He closes his eyes and tries to concentrate, maybe picking up some sound from beyond the door.

Seeing Robert stop to listen so intently, Charity kept her pole-arm at the ready, as if the doors might open at any moment and a sudden call for action issued. However, the down moment gave her a bit of time to look back upon her new associate, and then her employer, before focusing back to the door and the job of keeping Robert safe.

Jasmine remained a few steps up from Jamir, keeping to the back yet.

Robert listened at the doors. Charity was quiet not wanting to interfere. Neither could hear any noises coming through the door from the other side.

Jamir was quiet while Robert listened at the closed doors.

Not seeing ay reaction from the warrior to indicate he heard anything, he whispered, “Do you you want to make any preparations before opening them. I presume you think the leader is just on the other side, yes?”

"I have my sword in hand, so i am prepared as it gets. Any of you need prep time? Else I would just go in sword blazing." Robert replies to Jamir.

"Good here," Charity mentions in a subdued voice, barely audible even to those a few short steps away. She reaches down and pats her silver hammer at her belt, before resuming her readied stance. She takes a breath as her eyes narrow in anticipation.

The Ranger tries to push the door open.

Long red tresses shift together as Charity nods in assent of Robert's plan. A quick look back at Jamir and Jasmine as she waits for the third count, she tries to open the door as best she can with her right hand, left still holding onto her primary weapon...

[sblock=action]Charity is ready to hold her hand in front of Robert at the last second if either Jamir or Jasmine look unready. Otherwise opening the door and getting her main hand back onto her weapon as soon as possible.[/sblock]
[sblock=Charity Mini Stats]Charity
AC: 18 (17 flat-footed, 11 touch)
HP: 42/42
CMB: +6 CMD: 17

Jasmine said nothing and let you all just open the door.

The double door opened and revealed a large chamber with tiled floor and stone walls. A mosaic of a large rat was designed into the tiles in the center of the room. There were heavy doors along the right wall, with little barred windows in them like they were the doors to cells.

The room was dark, lit only by the ioun stone orbiting Jamir’s head. In the dimness before you was a lone rat-man. He looked like he had been waiting for you. Unlike the others, he was wearing a shining steel breast plate. In his hand was a silvery rapier made of mithral.

The wererat dropped an empty vial that clattered on the tiles. His voice was a deadly hiss, “You should not have come. Tis your own fatal mistake.”