The drow are featured in the PHB while the others are not probably beacuse it's more popular. You can find those options for free in the elemental evil player companion, along with genasi and goliath player races.

messy said:
3. why isn't there a skill for constitution? it could be called stamina.
Click to expand...

The way 5e works RAW is that there are no skill checks, only ability checks that can (but don't need to) benefit from skills. So you still can roll "stamina" ability checks with CON, and there are character abilities that can even let you add your proficiency bonus to it, even without an associated skill. You might prefer the variant rule that decouples skills from particular ability scores, allowing you to roll a Constitution (athletics) check.

messy said:
4. i see there's different damage rolled when using a versatile weapon two-handed. does this mean the 1.5 strength bonus is no longer added to damage? as i recall, in 4e the damage bonus was a flat +1.
Click to expand...

Yes, using a weapon with both hands doesn't change your ability modifier to damage.

messy said:
5. what happened to the paladin's divine grace?
Click to expand...

Not sure what that ability was, or what edition you're talking about, but if you don't find it in the base class it might have become a spell or subclass feature.

messy said:
6. why do characters get an ability score improvement at level 19 rather than 20? is this an attempt to avoid dead levels?
Click to expand...

Hard to tell what exactly the intent was, but your guess seems perfectly reasonable.

Presumably this was regarded as a simple way to boost those classes without adding too many abilities to classes that are often expected be noob friendly.

messy said:
8. why are the sections on preparing and casting spells so complex? suddenly, i'm longing for the good old days of simple, vancian casting.
Click to expand...

I think you'd need to be more specific on your problem with those. In my experience they are not regarded as more complex than previous editions spellcasting rules.

I assume because a big complaint with 4e was how classes felt the same with the at will, encounter and daily Powers the designers went the other direction and introduced a bigger varienty in player ability recharge.

messy said:
10. can finesse weapons be used two-handed? would there be any benefit?
Click to expand...

There are no two-handed finesse weapons in the PHB, but no rule prevents that from happening as more equipment gets published. If I recall correctly there's a two-handed weapon that becomes finesse with a feat for Eberron. There's no benefit from using two hands with a one handed weapon though.

messy said:
11. i'm a little confused about short rest healing. let's say bob the 8th level fighter takes a short rest. he can roll 8d10 healing during this rest, and these dice are replenished after a long rest. is that correct?
Click to expand...

Almost. He can roll all 8 dice during a short rest, but he can only regain up to half his total, which means only 4, during a long rest.

messy said:
12. what's the math behind advantage/disadvantage? does it correspond to a simple +2/-2? or is it way more complicated than that?
Click to expand...

It's way more complicated than that. Basically, it's most effective whenever you need between an 8 to a 14 on the D20 and less effective otherwise. Here's a table that shows the approximate equivalent modifier for advantage and disadvantage depending on your target number: 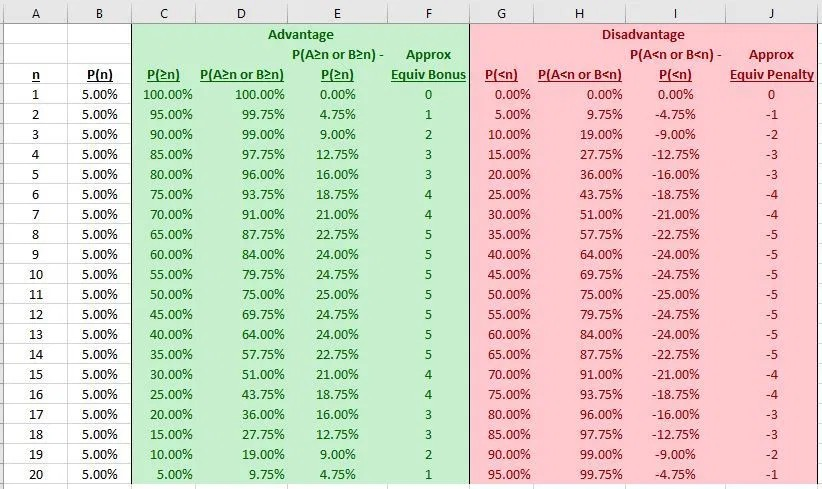 messy said:
13. why don't fear effects target charisma saves? one aspect of charisma is confidence, after all.
Click to expand...

The game was designed so that Dex, Con and Wis were the most important saves. That way each character was expected to be proficient in one common and uncommon save. Fear effects are quite common, so it makes sense to group then with the most common save for mental effects.

messy said:
14. do critical hits need to be confirmed? i see no mention of this, so i really hope it was dropped...
Click to expand...

No need for confirming critical hits. Enjoy your 20s lol

messy said:
15. what's with all the omitted spells? no prismatic sphere?
Click to expand...

Look for them in D&D Beyond, some might be published in other books.

messy said:
16. i've heard there is a pdf of revised classes available for download somewhere. where can this be found?
Click to expand...

There are many homebrew versions of all classes floating in the internet, so it's hard to tell what you're refering to. No official revised classes, although Tasha's Cauldron of Everything has variants for core class features.

messy said:
many thanks for all replies!
Click to expand...

Hope I could help.

85. what contest is bargaining? In one campaign we are still something buying or selling with trying get better prize (because this GM has different prize list as usually, so we buy by 125% but sell loot by 25% if nothing try). So on our side it's Persuation, but Storekeepers? Wisdom save, Charisma save, just ability check or his Persuation, Insight?

And what magic can help - guidance before stepping inside, hex from distant?

delph said:
85. what contest is bargaining? In one campaign we are still something buying or selling with trying get better prize (because this GM has different prize list as usually, so we buy by 125% but sell loot by 25% if nothing try). So on our side it's Persuation, but Storekeepers? Wisdom save, Charisma save, just ability check or his Persuation, Insight?

And what magic can help - guidance before stepping inside, hex from distant?
Click to expand...

For the opposed check, I would think Charsma (Persuasion or intimidation, depending on the PC’s tactics) vs. Wisdom (Intuition). Although, if the NPC is making counter-offers, you probably shouldn’t have them attempt similar checks.

The thing in question (and therefore requiring a roll) is whether or not the shopkeep will accept a specific offer. That will never be an issue with the counter-offer, because the players will always know whether or not they want to accept.

As for magic, anything that imparts the charmed condition will get you advantage on the ability checks. So can the Friends cantrip, if you’re okay with the target becoming hostile a minute later.

The suggestion spell is also a great shortcut, but has to sound reasonable. Something like: “Look, I’m kind if in a hurry, here. Normally, I’d be happy to haggle back and forth, but why don’t we just skip to the part where you sell this to me for as low a price as you were willing to go?”