Last week in Mythological Figures we did Nikola Tesla using the tinkerer from A Touch More Class (and the week prior Sherlock Holmes using the savant) and that trend continues as the Kickstarter approaches (join the mailing list here to get notified when it launches TOMORROW). Today however we're headed into the frontier of the Wild West. The subject? An infamous gun-wielding outlaw that could be held by no jail, the free-rambling drifter known by many names but one more than any other: Billy the Kid! 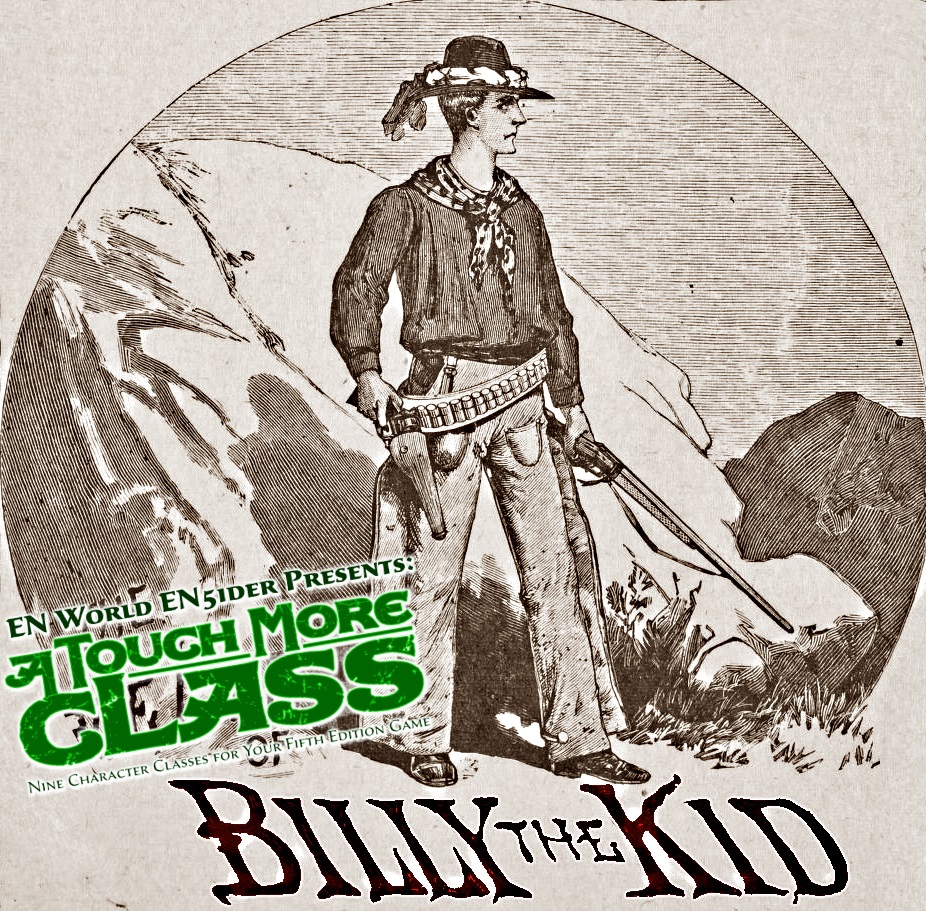 Billy the Kid a.k.a. Henry McCarty a.k.a. William H. Bonney was born sometime in 1859 in New York city, moving with his mother to Indianapolis where she meets and marries William Henry Harrison Antrim. Together they move down to Kansas, then Santa Fe in the New Mexico territory where she dies shortly thereafter to tuberculosis. Only 15 years old, in exchange for room and board he lives with Sarah Brown until made to leave for stealing food all of 10 days later. Then comes his first real crime: stealing clothing and a pair of pistols from a chinese laundry alongside George Schaefer--he breaks out of jail all of 2 days later, becoming a fugitive and living with his stepfather before he of course steals from him and makes for the Arizona Territory.

Henry McCarty (he’s still using his birth name at this point) is a gambling ranch hand, working with John R. Mackie (a Scottish criminal and US Cavalry private) to steal horses from the local soldiers. It’s here he gets the Kid part of his nickname, so-called for his “youth, slight build, clean-shaven appearance, and personality.” In the village of Bonita in 1877, McCarty gets into an argument with a blacksmith named Francis P. “Windy” Cahill--things get heated, a fight breaks out, and in the end the smithy is shot, dying the next day. McCarty flees but is captured when he returns, though of course he escapes on a stolen horse and makes for the New Mexico Territory. Unfortunately this time the steed is taken by Apaches and McCarty has to walk to Fort Stanton, staying with a friend named John Jones and brought back into good health by the fellow’s mother (Barbara Jones). Next he joins up with rustlers stealing cattle from John Chisum in Lincoln County. The second part of his nickname begins this year as he starts calling himself William H. Bonney.

During the Lincoln County War (a violent but informal clash between the local rancher factions of McSween versus Murphy-Dolan) he’s charged with 3 murders, and over the course of the rest of his outlaw career--which lasts until 1881--he’s thought to have killed another 8 men, and more impressively breaks out of prison another half dozen odd times. Several men claimed to be him though only two hold any possibility of being true, and although The Authentic Life of Billy, the Kid is published the next year the popularity of his legend took its time taking root.

Design Notes: DMG said CR 5 and change, Blog of Holding’s rubric came down to 6 and change so I’m settling on 6. If you need an outlaw gunslinger this will absolutely do the trick, although the discerning GM in need of someone more lethal can swap in the Bushwaker archetype instead (drop Lay of the Land, Fast Draw, and Reputation; add simplified 2d8 ranged sneak attack, Expertise with Stealth, double weapon ranges). For the man who apparently could not be jailed however, I think I hit all the really important marks. Plus it’s surprisingly short which is a nice bonus.

Background: Guttersnipe - Urban Knowledge. Billy and his allies (while outside of combat) move at double their normal speed when traveling between two locations in the same city.

Fighting Style: Point‐Blank Shooter. Billy does not have disadvantage on attack rolls when he is within 5 feet of a hostile creature who can see him and who isn't incapacitated.

Lay of the Land. Billy doubles his proficiency bonus when making Intelligence or Wisdom checks relating to the outdoors. While traveling through the wilderness for an hour or more, he gains the following benefits:

ACTIONS
Extra Attack. Billy can attack twice, instead of once, whenever he takes the Attack action on his turn. If he's wielding his revolvers, he uses his bonus action to fire it (and does not gain his Dexterity bonus to damage).


REACTIONS
Fast Draw. As a reaction when a creature attacks Billy, he can make a ranged weapon attack against that creature. This attack occurs before the attacking creature’s. Additionally, once per round Billy can draw and stow one or two firearms without requiring any action.

Reputation (2/Long Rest). As a reaction when a creature Billy can see makes an ability check, attack roll, or saving throw, he can impose disadvantage on that roll as the power of his reputation shakes its resolve.
Last edited: Jun 17, 2019
You must log in or register to reply here.
Share:
Facebook Twitter Reddit Pinterest Tumblr WhatsApp Email Link
Forum list