Last week in Mythological Figures we did a build of Sherlock Holmes using the savant from A Touch More Class and we’ve decided to continue that trend as the Kickstarter approaches (join the mailing list here). With that in mind today’s subject is one right out of history instead of literature or myth, and given his forte we’re using the tinkerer class to stat out Nikola Tesla! 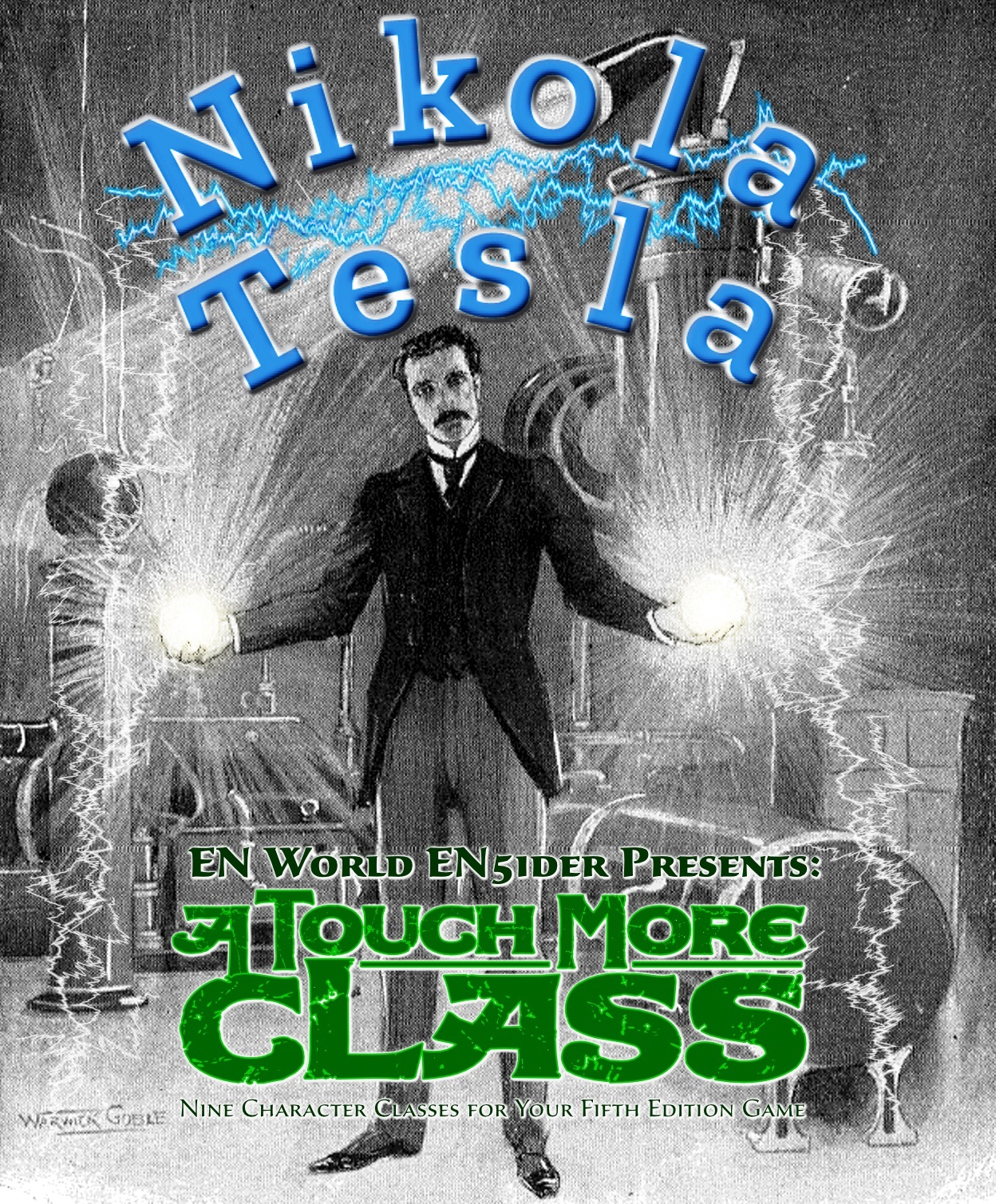 Alternating current electricity (the kind used almost ubiquitously around the world), hydropower, radio, robots, x-ray photography, sparkplugs, fluorescent lights, remote controlled boats--this inventor had over 700 patents and you are almost certainly reading this article by using something that would not exist without him. Born in 1856 in Croatia to a priest, at the age of 17 after contracting cholera Nikola convinced his father to send him to engineering school if he survived. With 4 cents in his pocket he traveled to New York city in 1884, proposes his alternating current system to Thomas Edison, gets offered 50 grand for it, and then when he comes back a month later with the first induction motor there’s no payment and a lifelong rivalry begins (which ultimately ends up keeping both from winning the Nobel Prize). George Westinghouse ends up buying it instead for $60,000.

Then the mad science really begins, trying to transmit energy directly through the air. Tesla is the first person to figure out radio but a fire destroys his papers, and he encourages the success of Guglielmo Marconi--partly because the man was making use of more than a dozen of his patents. In 1899 he moves to Colorado, scrabbling together a wireless transmission device that sends power to 200 lightbulbs from over 26 miles away. Funding doesn’t go well on an improved version (the Wordenclyffe Tower), the Depression hits, he only gets maybe a tenth of the money required to make it, and he starts to unravel. This includes saving injured pigeons, receiving messages from aliens, and started talking about making a Death Ray until dying in 1943 when the government seized all of Tesla’s notes. They probably weren’t worth much though because purportedly he predominantly kept all of his designs up in his brain until they had to be drawn out.

If you are keen to probably last century’s coolest mad scientist, make sure to mark July 10th on the calendar (it’s the informal Nikola Tesla Day not yet recognized globally).

Design Notes: I’m pretty pleased with how this one came out! Aside from Dingbots this feels like a good fit for such a prolific inventor with a spell list and class features that are very pro-electricity. The Mechanic archetype doesn’t lean very heavily into combat until 10th level (wherein they get a megarobo buddy not unlike the gondsman that techsmiths got in D&D 3.5) and is (obviously) very focused on downtime activities, so the challenge rating is lower than usual for a level 9 NPC. I do regret not fitting another 5 languages in but reckon the higher Intelligence is worth it. Note that if you really want to get that 20, you could drop the “Brilliant” feat for a full +2 bonus (increasing Arcana, History, Investigation, spell save DC, and spell attack bonus by +1) but he was known to be able to recite books which to me says eiditic memory so I went with that over the 20 he probably deserves.

Background: Scholar. Acumen or fate gently nudges Nikola toward the answers to his questions. When he fails to recollect or discover more about a subject of lore, he knows where or whom can give him that information (usually from an athenaeum, library, institute of higher learning, another scholar, or mystical creature). The lengths to which he must go to acquire this information and the feasibility of doing so is entirely at the GM’s discretion.

Affect-Engines (Lightning; 2 total). Nikola can take the Use an Object action to attach or detach an Affect-Engine he is touching against a weapon or object. He can change an Affect-Engine’s type (to cold or flame) with 1 hour of maintenance during a short or long rest.

Affect Discharge. When Tesla hits a creature with a weapon attack with an attached Affect-Engine, he can expend one spell slot to deal extra damage to the target. The extra damage is 2d6 for a 1st-level spell slot, plus 1d6 for each spell level higher than 1st, to a maximum of 5d6. The damage type is according to the type of Affect-Engine (usually lightning).

Construction. Tesla can craft at a rate of 70 gold pieces per hour. Construction crafting counts as light activity for the purposes of short and long rests. While rapidly crafting, Tesla must expend material (such as wood, metal, or glass) with a value equal to the item he wants to make. The item can be an exact duplicate of a nonmagical item, such as a copy of a key, if he possesses the original during his crafting. Items Tesla constructs that aren’t weapons or armor have AC 16 and hit points determined by the material they are made out of: Tiny (fragile 2 hp, resilient 5 hp), Small (fragile 3 hp, resilient 10 hp), Medium (fragile 4 hp, resilient 18 hp), Large (fragile 5 hp, resilient 27 hp).

Dingbots. Tesla adds find familiar to his sparknotes and can cast it as a ritual. It is always prepared and doesn’t count towards the number of spells he can have prepared. When Tesla casts this spell, the familiar is a construct called a dingbot instead of a beast. It is immune to disease, has resistance to poison, and does not need to eat or breathe, but can ingest food and drink if it wishes. When the dingbot is reduced to 0 hit points it disassembles, leaving behind no recognizable form or useful material. Constructing and reconstructing it requires 10 gp worth of material. Tesla’s dingbot can craft at a rate of 300 gp per hour. When he uses Construction with his dingbot, Tesla can add their crafting rates together.

Feat: Brilliant. Nikola always knows how long it will be before the next sunset or sunrise, the northerly direction, and can perfectly remember anything he’s experienced within the last 31 days.

Improved Affect Discharge (1/Turn). Whenever Tesla hits using a weapon attack with one or more attached Affect-Engines, he can deal 1d8 energy damage to the target (of the Affect-Engine’s type), in addition to the weapon’s damage.

Instacraft (4/Long Rest). Tesla can use an action to craft an item with a value of 1 gp or less.

Mechanic Proficiencies. Nikola doubles his proficiency bonus (+4) to any checks made using tinker's tools on his Constructions and Intelligence checks made to control Power Appliances.

Quick Engine. Tesla can construct an Affect-Engine within 1 minute so long as he is concentrating and wielding tinker’s tools. Each turn during this minute he can move, take bonus actions, and use his reaction, but must spend his action constructing the new Affect-Engine.

Spellcasting. Nikola is a 9th level spellcaster that uses Intelligence as his spellcasting ability (spell save DC 16; +8 to hit with spell attacks). Nikola has the following spells prepared from the tinkerer’s spell list:

1st-level (4 slots): alarm, floating disk, silent image, thunderwave​
2nd-level (3 slots): darkvision, mirror image​
3rd-level (2 slots): call lightning, lightning bolt​
​
Switch Function. As an action or bonus action, Tesla can change the elemental type of an Affect-Engine he is touching to another type. To use this feature on an Affect-Engine, it must not be performing any task. An Affect-Engine that is attached to an object but is otherwise not doing anything is not considered to be performing a task.

Overload. Tesla can expend a spell slot to overload an Affect-Engine he is touching. As part of the same action, he can throw it to a space within 60 feet. At the end of his turn, the Affect-Engine combusts in a 10-foot-radius sphere. Creatures in the area must make a DC 16 Dexterity saving throw. On a failed save, a creature takes 3d10 energy damage for a 1st level spell slot plus 1d10 for each spell slot level higher than 1st (to a maximum of 7d10), or half as much damage on a successful one. The damage type is according to the type of Affect-Engine. For each spell slot level higher than 1st, the radius of the sphere by increases by 10 feet.
Last edited: Aug 13, 2019
Click to expand...

Supporter
That's pretty cool. I think it really highlights the possibilities of the Savant in steampunk settings. Well done sir.

Looks interesting. In developing his "Dingbot" familiars, is it possible Nikola ran across some papers at the nearby Transylvania Polygnostic University penned by one Agatha Heterodyne a couple of centuries earlier?

blink blink... ok where is that Paul Bunyan one.

And a new movie coming out about the same people

Tesla is one of the few historical figures you could ascribe magic ability to and I wouldn't bat an eye.

He could have been a Great Old One pact Warlock for all I know.

Mind you this build is for a tinkerer, not a savant (although it'd make sense for Tesla to pick up a few levels of savant!)


BiblioTek said:
Looks interesting. In developing his "Dingbot" familiars, is it possible Nikola ran across some papers at the nearby Transylvania Polygnostic University penned by one Agatha Heterodyne a couple of centuries earlier?
Click to expand...


Quite possibly! Dealer's choice there, I think.


Garthanos said:
blink blink... ok where is that Paul Bunyan one.
Click to expand...


How in the hells did you find that out? Paul Bunyan won't post until next week or the week after. :3

BookBarbarian said:
Tesla is one of the few historical figures you could ascribe magic ability to and I wouldn't bat an eye.

He could have been a Great Old One pact Warlock for all I know.
Click to expand...

Mike Myler said:
How in the hells did you find that out? Paul Bunyan won't post until next week or the week after. :3
Click to expand...


Don't worry you arent that predictable. Holmes was on my list (Ever since seeing the RDJ version demonstrate the predictive quick thinking intelligence used in combat) but I expected to see PB before him perhaps as the character is more Mythic.

Mike Myler said:
Quite possibly! Dealer's choice there, I think.
Click to expand...

That's neat! I wasn't aware that was even a thing that existed, even though I grew up in that era. Now I have to wonder if that's where the Foglios got the idea from as well.

D&D 5E The adventuring day is based HP/Hit Dice as the primary resource.