This edition of Mythological Figures has been in the queue for a long time now and after doing the research, I wish I’d have gotten to her sooner. We're taking a look at the incredible Pirate Queen Ching Shih! 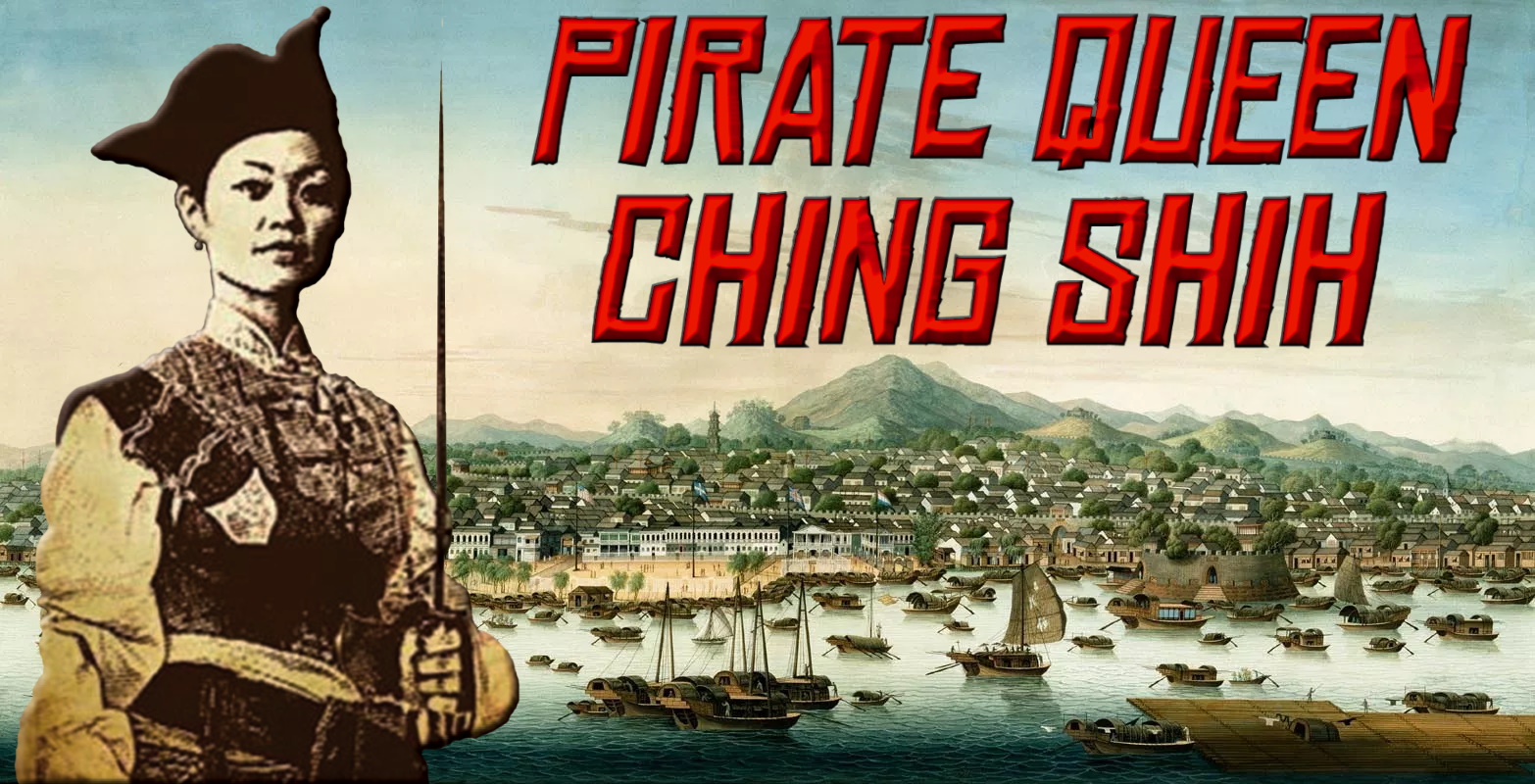 Where to begin with Ching Shih? Well, she wasn’t originally called that. She was born and named Shih Yang in 1775, then took on the nickname Shih Heang Koo while working on a flower boat (brothel) in Guangzhou until 1801 when she marries the pirate Cheng I (from a notorious family known for pirating no less), now being called Cheng I Sao. Together they create a coalition of buccaneers known as the Red Flag Fleet, sporting over 200 cannons and more than 1,300 rifles that made them a practically unstoppable force.

Cheng I dies in Vietnam in 1807 and--quick to retain her power over the pirate fleet--she marries their adopted son Cheung Po (note this is not one of her two biological children). It’s a little difficult to be certain, but this seems to be around when she takes the name she’s known for: Ching Shih. While Cheung Po is the nominal head of the fleet (what with being a male and all) she is the real decided and holds all the reins of power. This brings us to the code of laws imposed upon all of her pirate subordinates.

There were other rules too, including some that protected women (although certainly not all the women), and this rigid structure of order helped turn her pirates into a fearsome navy that goes undefeated for several years. In 1810 their daring victories come to an end when the Portuegese Navy gives them the what-for in the Battle of Chek Lap Kok. She surrenders and accepts amnesty from the Qing Dynasty, and--this is the part that’s really out of this world--only 60 of her pirates are banished, 151 exiled, and 126 executed leaving 16,981 of her buccaneers to go free. At her height she commanded more than 17,000 crew! Cheung Po joins the Qing Navy and with the governor of Guangdong’s blessing the adoption by Ching Shih is annulled, making their marriage a proper one. He dies in 1822 but she lives on, serving as an advisor against British forces in the first Opium War and running her own gambling house until she dies in 1844 at the ripe old age of 69.

Design Notes: Look I know this woman was the most powerful pirate probably ever but she was definitely lawful--she set up a bunch of laws for her pirates. If nothing else Ching Shih was a canny operator and definitely a commander which is where I focused her design. Between Bardic Inspiration (or Cunning Action to Help), her spellcasting (which is as mundane-themed as I could manage), and Tactical features she has little reason to get into the thick of a fight and will be most effective when she’s yelling at her subordinates. Let’s take a look at the numbers: the DMG says 10.2, the Blog of Holding’s rubric a little higher at 11.16666. Considering that she’s intended to be used with minions I’m inclined to go with the higher value.

Background: Nautical. Ching is able to acquire passage on a sailing ship for her and her allies free of charge. She has no control over the ship’s route, departure, or return, and although no coin is required she and her companions do have to help crew the vessel.
Action Surge (1/Short Rest). On her turn, Ching can take an additional action on top of her regular action and a possible bonus action.
Bardic Inspiration 1d8 (3/Short Rest). As a bonus action on her turn, Ching can choose one other creature within 60 feet who can hear her. That creature gains one Bardic Inspiration die, a d8. Once within the next 10 minutes, the creature can roll the die and add the number rolled to one ability check, attack roll, or saving throw it makes. In addition, they can add it to a weapon damage roll, or when they are hit by an attack they can use their reaction to add it to their AC (possibly causing an attack to miss). The creature can wait until after it rolls the d20 before deciding to use the Bardic Inspiration die, but must decide before the GM says whether the roll succeeds or fails.
Cunning Action (1/Turn). Ching can take a bonus action to take the Dash, Disengage, Help, or Hide action.
Evasion. When Ching is subjected to an effect that allows her to make a Dexterity saving throw to take only half damage, she instead takes no damage if she succeeds on the saving throw, and only half damage if she fails.
Feat: Brilliant. Ching always knows how long it will be before the next sunset or sunrise, the northerly direction, and can perfectly remember anything she’s experienced within the last 31 days.
Jack of All Trades. Ching adds +3 to any ability check she makes that doesn’t already include her proficiency bonus.
Second Wind (1/Short Rest). On her turn, Ching can use a bonus action to regain 1d10+8 hit points.
Sneak Attack (1/Turn). Ching deals an extra 14 (4d6) damage when she hits a target with a weapon attack and has advantage on the attack roll, or when the target is within 5 feet of an ally of Ching that isn’t incapacitated and Ching doesn’t have disadvantage on the attack roll.
Song of Rest. After a short rest, Ching or any friendly creatures who can hear her performance regain hit points by spending one or more Hit Dice, each of those creatures regains an extra 1d6 hit points.
Spellcasting. Ching is a 5th-level spellcaster that uses Charisma as her spellcasting ability for spells (spell save DC 17; +9 to hit with spell attacks). She has the following spells prepared from the bard’s spell list:

Cantrips: message, true strike, vicious mockery​
1st-level (4 slots): bane, comprehend languages, hideous laughter​
2nd-level (3 slots): calm emotions, silence, suggestion​
3rd-level (2 slots): bestow curse, fear​
​
Tactical Focal Point. Ching selects a 10-foot square to be her tactical focal point as a bonus action or as part of the attack action, choosing one of the following benefits to apply to it. This lasts until she cannot take actions or uses this feature again. Each time Ching completes a long rest, she can swap one of these benefits for a different one.
Tactical Mastery (7/Long Rest). Ching uses part of her Attack action or a bonus action to take mastery of the battlefield, granting it to herself and allies within her focal point by expending uses of this feature. A creature that is granted a use of Ching’s Tactical Mastery can either regain 2d10 hit points when it is granted (any hit points greater than its maximum are temporary hit points) or use it to deal an extra 2d10 damage with an attack.
Tactician. Ching is able to use the Help action to aid an ally attacking a creature as long as the target of the attack is able to see and hear Ching and is within 30 feet of her.

REACTIONS
Uncanny Dodge. When an attacker Ching can see hits her with an attack, she can use her reaction to halve the attack’s damage against her.
Last edited: Dec 5, 2019

She'd agree she's clever and tough. Not so sure about the cookie bit though.

Lady pirates captured a lot of imaginations... as well as typical pirate booty.

I think focus points being a square is too restrictive (Mearles wandered across that thought in his video... possibly being 5 squares in whatever configuration might work better allows you to define a hold the line situation or a path of egress or various other niceties. - I noticed you adopted a derivation of his unfinished design enthusiastically
You must log in or register to reply here.
Share:
Facebook Twitter Reddit Pinterest Tumblr WhatsApp Email Link
Forum list