This entry in Mythological Figures might be the most popular figure of mythology to go about wearing a horse: Sir Guy of Gisborne! 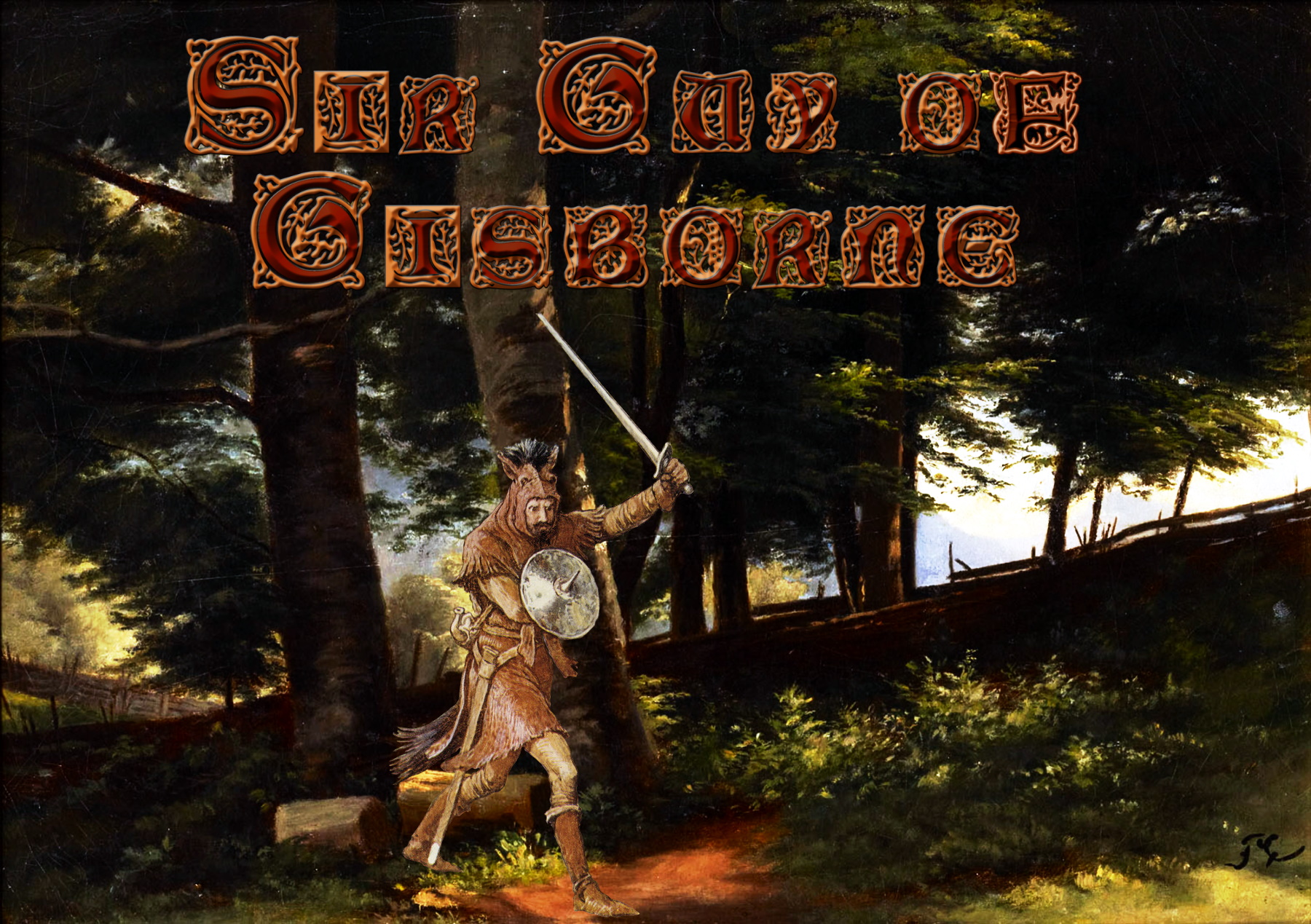 Little John and Robin Hood are strolling through the woods (sometime in 1650, or maybe even as early as 1475) as the legendary highwayman recounts a recent dream of being attacked by a pair of warriors. Suddenly they see a fellow unknown to them leaning on a tree up ahead—being the big burly guy he is, Little John offers to check this stranger out but Robin Hood gets angry at the suggestion, threatening injury for the perceived insult of cowardice. Little John takes offense and leaves, soon after captured by the Sheriff of Nottingham and soon to be hanged. This newcomer is clad in horse-hide from his head on down: Guy of Gisborne, a killer hired by the sheriff to hunt down and slay Robin Hood.

The two have it out with an archery contest (which of course the heroic highwayman easily wins) and then after identifying who he is a fight ensues. Robin Hood is stabbed by the assassin but takes the killing blow, slaying and then decapitating Guy, blowing his horn to tell the sheriff of victory, defacing his head, and donning his garb. Robin Hood wears his would-be killer’s unique accoutrements and carries what is supposedly his own head (now unrecognizable) to the sheriff and the guise works—after persuading the sheriff to let him execute Little John, instead he frees his friend who then fires an arrow through the villainous noble’s heart.

Design Notes: A killer hired by the Sheriff of Nottingham is probably a soldier so Guy here’s got a little bit of ranger (he is a hunter right?) and then a lot of fighter, going with brute because let’s be honest—people that wear horses are not exactly subtle. Let’s do the numbers! The DMG comes in at 6.5, the Blog of Holding 7.6, so everything averages out a wee bit past CR 7.

Background: Soldier. Guy commands respect in the army. Soldiers loyal to the crown know he is their superior, and he can use his influence to temporarily requisition simple equipment or horses, or gain entrance to military fortresses and outposts.

Action Surge (1/Short rest). Once on his turn, Guy can take an additional action on top of his regular action and a possible bonus action.

Brutal Toughness. Guy gains a +1d6 bonus to saving throws and death saves (treating final results of 20 or higher on a death saving throw as a natural 20).

Colossus Slayer (1/Turn). When Guy hits a creature with a weapon attack, the creature takes an extra 4 (1d8) damage if it’s below its hit point maximum.

Favored Enemy. Guy has advantage on Wisdom (Survival) checks to track humans, half-elves, and half-orcs, as well as on Intelligence checks to recall information about them.

Natural Explorer (Forests). When Guy makes an Intelligence or Wisdom check related to forests, his proficiency bonus (+4) is doubled if he is using a skill that he’s proficient in. While traveling for an hour or more in his favored terrain, Guy gains the following benefits:

Spellcasting. Guy is a 3rd level spellcaster that uses Wisdom as his spellcasting ability. He knows the following ranger spells:

Primeval Awareness. Guy can expend one ranger spell slot to focus his awareness on the region around him. For 1 minute per level of the spell slot he expends, Guy can sense whether the following types of creatures are present within 1 mile of him (or within up to 6 miles if he is in a forest): aberrations, celestials, dragons, elementals, fey, fiends, and undead. This feature doesn’t reveal the creatures’ location or number.
Click to expand...

Mike Myler is a freelancing RPG goblin (or goblin that freelances for RPGs?), regent, the editor for the excellent EN5ider Patreon, and the Project Manager for Level Up: Advanced Fifth Edition. You can also find his marks in the N.O.W. book for the What's Old Is New RPG, on www.mikemyler.com⁠ (which has the neatest collection of free content around as well as links to his 6 hardcover campaign settings), and here on ENWorld in ENterplanetary DimENsions. What's next? The Oops! All Dragons | 45 dragons for D&D 5E and Level Up 5E Kickstarter ENDS this week! https://tinyurl.com/oops-all-dragons
W

Oh hey, just in time before my next session where the, Marshal that hired the pcs to help them investigate a situation, has this guy try to kill em.

Weiley31 said:
Oh hey, just in time before my next session where the, Marshal that hired the pcs to help them investigate a situation, has this guy try to kill em.
Click to expand...